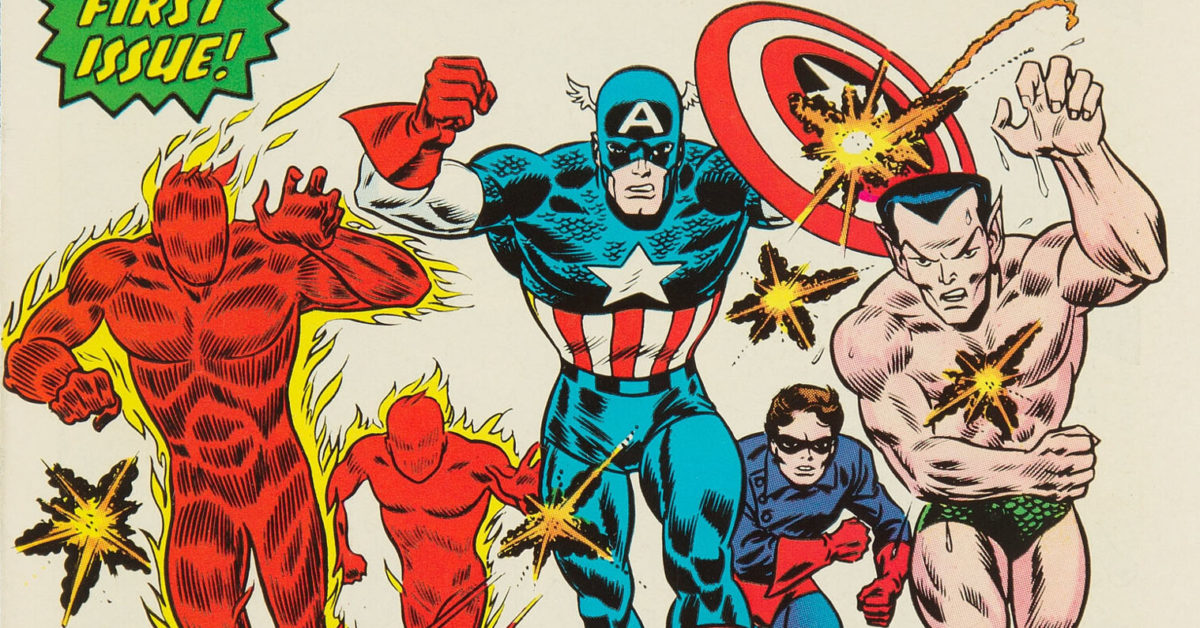 The Multiverse was a tricky business even before it really existed.  Marvel brought its Golden Age characters back slowly after the debut of Fantastic Four #1 launched the Marvel Universe for the Silver Age.  Captain America was unfrozen, lamenting a death that had never happened for his sidekick Bucky, and eventually, Tales of Suspense borrowed elements from some of his Golden Age adventures and retold them as historical WWII tales in the Silver Age.  The Sub-Mariner was awakened from amnesia to find that Atlantis had been destroyed by underwater atomic testing (which did happen a lot to Atlantis in comic books).  And of course, the Human Torch returned both in body (as the Vision) and in spirit (as a member of the Fantastic Four).  Naturally, these re-introductions created contradictions. Infamously, Captain America and the Sub-Mariner didn’t recognize each other when Cap made his debut in Avengers #4, for example. While DC Comics eventually attempted to explain the differences between its Golden and Silver Ages with the multiple Earths concept, Marvel had mostly just sort of ignored its own set of such differences, preferring to refer to its Golden Age comic book stories in a very broad way — until Giant-Size Invaders #1.  There’s a copy of this fascinating moment in Marvel history with Giant-Size Invaders #1 (Marvel, 1975) CGC NM+ 9.6 White pages up for auction in the 2022 May 1-2 Sunday & Monday Comic Books Select Auction #122218 from Heritage Auctions.

While the appearance of Golden Age versions of Captain America, Sub-Mariner, and the Human Torch in Avengers #71 is often called the first appearance of the Invaders, the connection is indirect, and the team is not referred to as the Invaders there. That time-traveling WWII-era adventure comes over five years before Giant-Size Invaders #1 (which debuted before the Invaders series itself), it doesn’t include all of the Invaders team, and because of its 1941 time frame, that saga creates more continuity problems than it solves.  While they are clearly living in the same world (and of course, there are crossovers), Marvel’s principal Golden Age heroes did not really form a team until after the end of WWII (All-Winners Comics #19, Fall 1946) — although both Bucky and Toro were part of the Young Allies.  In a sense, it could be said that Giant-Size Invaders #1 attempts to solve the problem set up in Avengers #71.  To do this, it started creating specific callbacks to Golden Age comic book stories.

Giant-Size Invaders #1 reprints a story from Sub-Mariner #1 and references Young Allies #1.  In an editorial in this issue, Roy Thomas explains how this is going to work, “While as explained in the Invaders story, this issue’s Sub-Mariner reprint actually happened, more or less, we’re ordinarily not going to consider ourselves bound by anything which occurred in the old Timely mags unless we also verify it in the Invaders tales themselves.”

To underline the point that these heroes were a real team before Fall 1946 according to this “new” Marvel canon, Giant-Size Invaders #1‘s cover is a homage to All-Winners Comics #4.  That title’s covers featured Marvel’s marquee heroes together regularly, despite the fact that the interior comics themselves featured them in separate stories before All-Winners Comics #19.  Overall, Invaders is probably underappreciated for what it attempted to do, and even thinking about it now makes me wish it had ended up being a more comprehensive effort. There’s a copy of this fascinating moment in Marvel history in Giant-Size Invaders #1 (Marvel, 1975) CGC NM+ 9.6 White pages up for auction in the 2022 May 1-2 Sunday & Monday Comic Books Select Auction #122218 from Heritage Auctions.

“Lots of Questions to Be Answered”

Nobody stays on top forever in HELL IS A SQUARED CIRCLE

New Silent Hill game has been rated in Korea