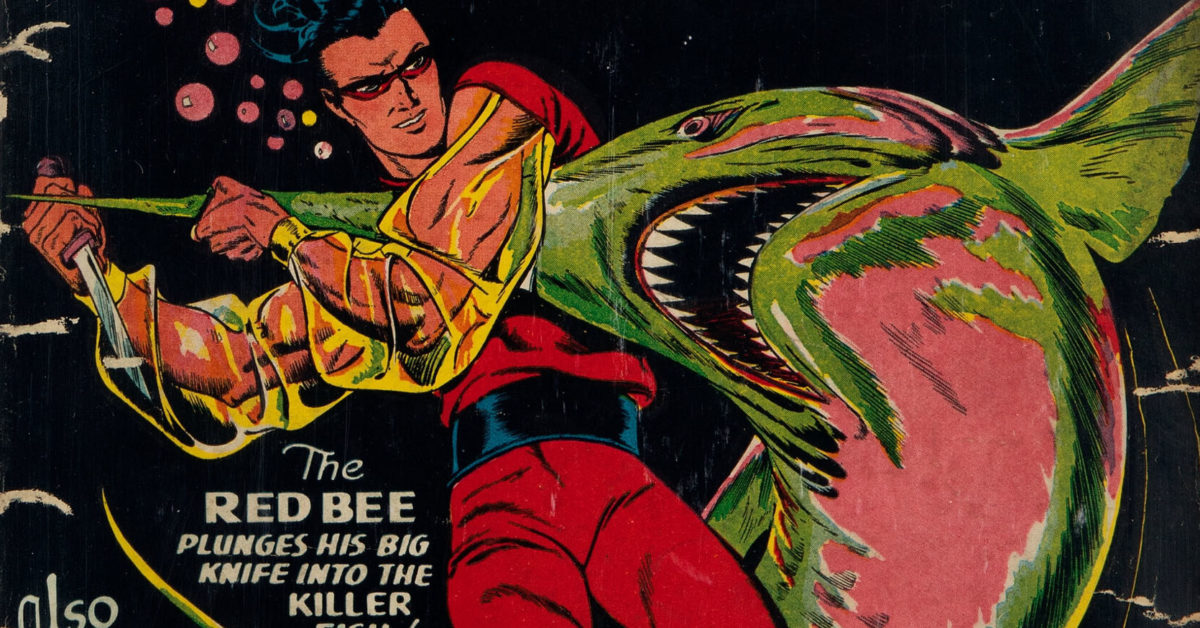 Despite working on and co-creating numerous characters now considered obscure, Lou Fine was considered one of the best artists of the Golden Age.  He was an artist that even other comic book greats admired, and his cover work for publishers Fox Feature Syndicate, Fiction House, and Quality Comics is still highly regarded by collectors to this day. Will Eisner would once say about Fine, “I had respect for his towering kind of draftsmanship. He was the epitome of the honest draftsman. No fakery, no razzle-dazzle — very direct, very honest in his approach,” while Joe Simon recalled, “My favorite artist was Lou Fine. He was also Jack Kirby‘s favorite artist. I know that Jack was a fan of and greatly influenced by Fine’s work.”  Fine is credited with roughly 56 covers during the Golden Age by GCD, with countless of them considered iconic by modern collectors.  The covers of comics like Planet Comics #1 and Fantastic Comics #3 are now the stuff of legend.  The cover of Hit Comics #5 featuring the Red Bee is another highly-regarded classic, and there’s a Hit Comics #5 (Quality, 1940) CGC VG- 3.5 Cream to off-white pages up for auction in the 2023 January 15-16 Sunday & Monday Comic Books Select Auction #122303 at Heritage Auctions.

The creation of Toni Blum and Charles Nicholas for his debut in Hit Comics #1, the Red Bee was an Oregon-based assistant district attorney who got his name from his usage of trained bees that could be deployed from his belt buckle.  Despite this strange beginning, or perhaps because of it, the character has not quite been forgotten.  The Red Bee was alluded to in the 2014 comedy film She’s Funny That Way. and also mentioned in the recent DCEU series Stargirl.  DC Comics acquired the character in 1956 with the rest of the Quality Comics IP, although he has since entered the public domain.

An obscure character elevated to collecting immortality by the artistry of Lou Fine, there’s a Hit Comics #5 (Quality, 1940) CGC VG- 3.5 Cream to off-white pages up for auction in the 2023 January 15-16 Sunday & Monday Comic Books Select Auction #122303 at Heritage Auctions.  If you’ve never bid at Heritage Auctions before, you can get further information, you can check out their FAQ on the bidding process and related matters.