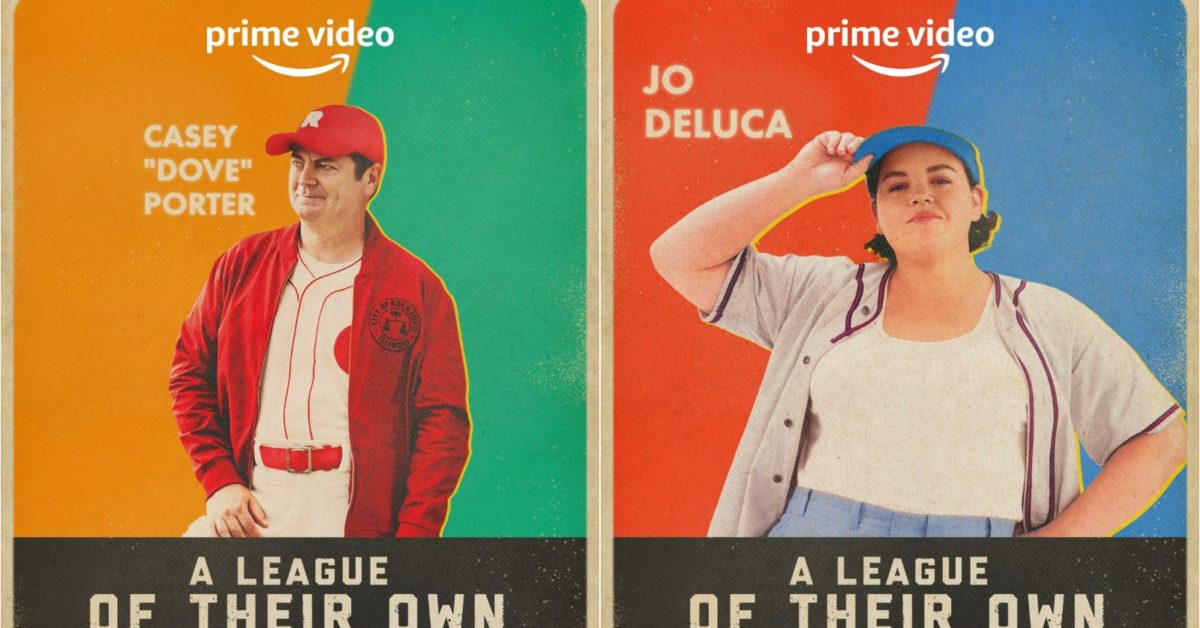 Okay, a little good news/bad news. Bad news? We still have a premiere date or month for Amazon’s Prime Video and series co-creators Abbi Jacobson (Broad City) & Will Graham‘s (Mozart in the Jungle) upcoming reimagined series take on Penny Marshall‘s 1992 film A League of Their Own. Good news? You’re getting another pair of “virtual baseball cards” to introduce the cast. This time around we have a look at Nick Offerman‘s Casey “Dove” Porter and Melanie Field‘s Jo DeLuca. Offerman’s Dove is a former Cubs pitcher who is brought in to coach the Rockford Peaches. Inspiring and charismatic, Dove was thought to be the next big Major League Baseball star but blew his arm out after three years. Now he’s looking to make his comeback by making the Peaches into champions. Field’s DeLuca is a power hitter from Queens who has survived countless escapades with her best friend, Greta (D’Arcy Carden). Boisterous and up for anything, Jo will defend her teammates til the end.

And in the first “inning,” we were treated to a look at Jacobson’s Carson Shaw and Chante Adams‘ Max Chapman:

Here’s a rundown of the A League of Their Own cast and the official backgrounds of each of our players, courtesy of Amazon:

Abbi Jacobson is Carson Shaw. Carson ran away from home and the life she’s known to be a catcher for the Rockford Peaches. She’s scared of the unknown but leans into new experiences. As the season progresses her confidence grows, both on and off the field, opening her eyes to who she could be, and the joy of truly being a part of a team.

Chante Adams is Maxine “Max” Chapman. Max is a wildly talented pitcher who is determined to play ball. She’s strong, blunt, and knows she’s good, but she’s still going to have to fight against her mom’s expectations and work harder than everyone else to pursue her dream.

D’Arcy Carden is Greta. Greta is a sophisticated, enigmatic first basewoman for the Rockford Peaches. Originally from Brooklyn, she came to tryouts with her best friend Jo, and her adventurous spirit and playful attitude keep Carson and the rest of the team on their toes.

Gbemisola Ikumelo is Clance, Max’s devoted best friend and a talented artist who loves comic books. She will do anything to help Max achieve her dreams, and her quick wit and sense of humor get them out of sticky situations.

Roberta Collindrez as Lupe. Lupe is a gifted athlete — as talented a pitcher as she is a hitter. She ran away from home and her complicated past to try out for the Rockford Peaches, and while she may seem aloof, she cares deeply about her own success and being a part of the team.

Kelly McCormack as Jess. Jess is a tough, no-nonsense Rockford Peach who plays shortstop and struggles with the performative aspects of the League. She came here to play ball and is determined to keep the team on track.

Priscilla Delgado as Esti. Esti plays 2nd base and is the youngest member of the Rockford Peaches. She came from Cuba to pursue her dreams, and while the language barrier can be challenging, her optimistic and playful spirit shines through, on and off the field.

Molly Ephraim is Maybelle. Maybelle plays center field for the Rockford Peaches. She’s kind-hearted and wants everyone to get along, and is known for her wild streak and easy laugh.

Kate Berlant is Shirley. Shirley is a sweet Rockford Peach who plays left field and struggles with anxiety on and off the field. She and Carson are roommates, and Carson helps her to overcome her fears and become a vital member of the team.

Melanie Field as Jo. Jo is a Brooklyn native who plays third base for the Rockford Peaches. She and Greta are long-time best friends. Jo has a larger-than-life personality, a sarcastic sense of humor, and isn’t afraid to speak her mind and stand up for what’s right.

Nick Offerman as Dove Porter. Dove is an ex-Cubs pitcher, brought in to coach the Rockford Peaches. The players quickly realize Dove Porter might not be the charming celebrity they all idolized after all.

Rosie O’Donnell as Vi. Vi is the owner of a local bar. A warm, gregarious woman, who welcomes Carson into her orbit.

Patrick J. Adams is Charlie. Charlie is Carson’s handsome, midwestern husband, on his way home soon from fighting overseas during WWII. He’s eager to return to a life back home with his wife.

Patrice Covington plays Gracie, who is in a longtime romantic relationship with Bertie (Robinson). Gracie is a supportive, sharp woman who works at the factory with Max (Adams) and introduces her to her colorful life and friends.

Lea Robinson portrays Bertie Hart, Max’s (Adams) uncle. He is kind, charming, and nurturing. Estranged from his family, he lives with his longtime partner, Gracie (Covington) on the outskirts of Rockford.

Andia Winslow is Esther, a striking, witty, competitive woman who is introduced to Max (Adams) and there is an instant connection that sizzles between the two.

Rae Gray portrays Terri, a player on the Rockford Peaches. She is a pitcher whose husband is also overseas at war.

Lil Frex (Emma Carroll) is Ana, a player on the Rockford Peaches eager to step in and get her shot as a catcher.