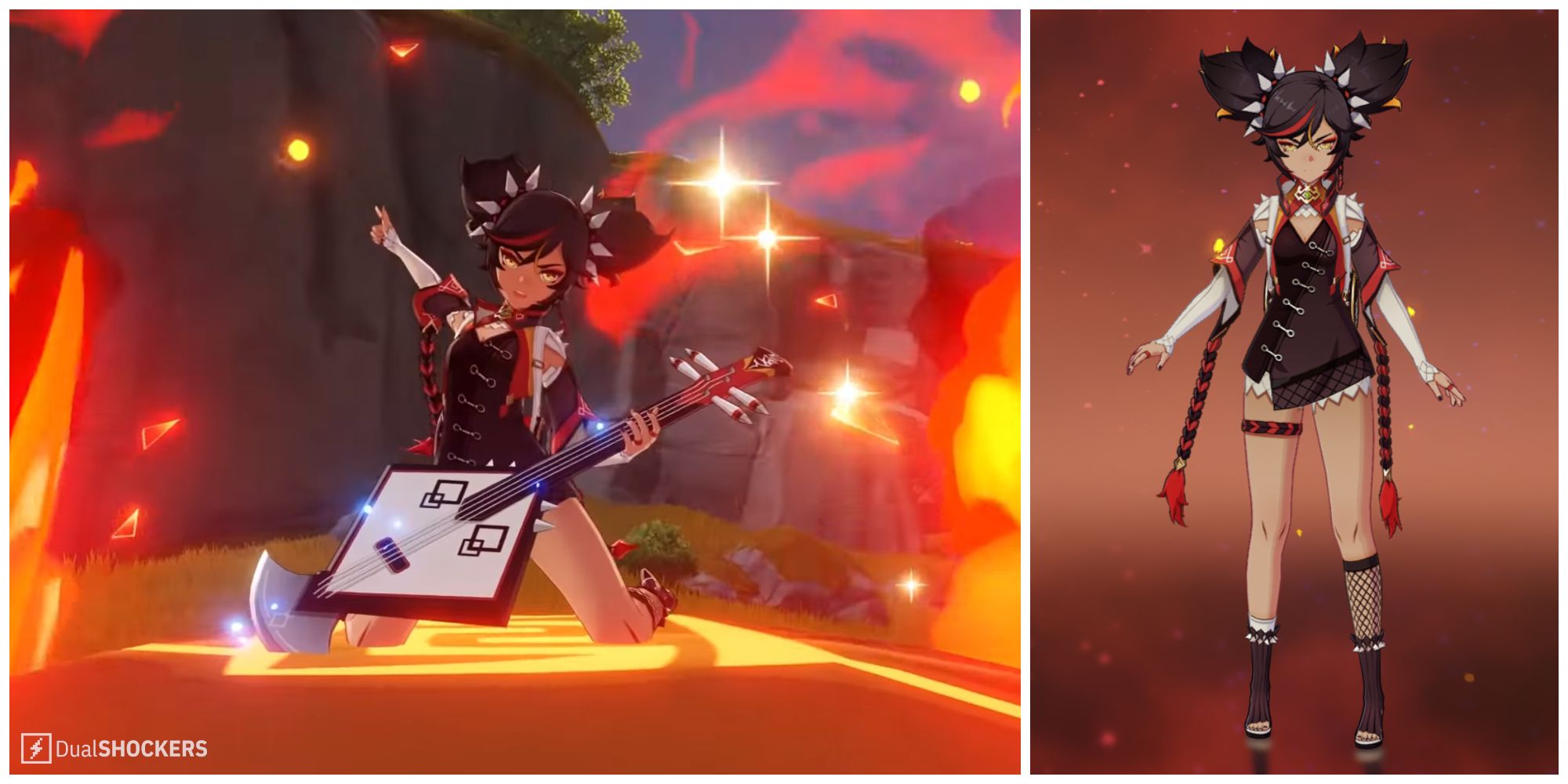 The one, true rock star of the city of Liyue, Xinyan is a performer at heart and can often be found at concerts around the city. She makes all of her own music and performs it to large, enthusiastic crowds in Genshin Impact.

As a 4-Star Pyro character, Xinyan is not only easy to obtain, but she can also deal a decent amount of Physical DMG to opponents with her Claymore. Here’s how you can build the rock-n-roll legend.

With Xinyan’s abilities and talents, she is best suited to the role of a Sub-DPS team member. Her Elemental Burst deals a large amount of Physical DMG as well as Pyro DMG from explosions across the field. This ability is great for those who want to deal damage without an Element, but with an added bonus of Pyro on top of it. She can also create shields with her Elemental Skill to protect her teammates. With this in mind, here is the best artifact set for her.

4-Set Of Emblem Of Severed Fate

With a 2-Set, Xinyan will receive an increase to her Energy Recharge by 20 percent. A 4-Set will increase her Elemental Burst DMG by 25 percent of her Energy Recharge. A maximum of 75 percent bonus DMG can be obtained. This set is a great way to focus mostly on Xinyan’s Elemental Burst, as it will keep its energy up, so she can use it more frequently, while also increasing its damage. To make sure you get the most out of this set, here are the main stats and substats you should choose for each piece.

In order to increase the damage from Xinyan’s Elemental Burst as much as possible, you’ll want to focus on increasing her ATK% and Physical DMG Bonus. Due to the 4-Set of Emblem of Severed Fate also giving a boost through Energy Recharge, you’ll want to consider developing this stat, as well. If you want to build up the shields from her Elemental Skill, consider tacking on some DEF stats, too, as this is how her shield will absorb more enemy damage.

When choosing the right weapon for Xinyan, It’s important to build on either CRIT Stats or ATK to increase her damage output. Her main focus is the Physical DMG she deals rather than her Pyro DMG, which can be greatly increased with these stats. To make sure you are giving her the ability to unlock her full potential, here are some of her best weapons.

Redhorn Stonethresher will give Xinyan a base increase of 19.2 percent to her CRIT DMG. Its Bonus Skill will increase DEF by 28 percent. Normal and Charged Attack DMG will increase by 40 percent of Xinyan’s DEF. This weapon is perfect for those who want to buff up Xinyan’s damage, but also give a boost to her shields as well. You’ll be able to create strong CRIT Hits while also protecting your teams.

Wolf’s Gravestone will give Xinyan a base increase of 10.8 percent to her ATK. Its Bonus Skill will increase her ATK further by 20 percent. On hit, attacks against enemies with less than 30 percent HP will increase all party members’ ATK by 40 percent for 12 seconds. This can only occur once every 30 seconds. Wolf’s Gravestone is a great way to increase Xinyan’s ATK while also providing the rest of her team with a significant buff.

Serpent Spine will give Xinyan a base increase of 6 percent to CRIT Rate. Its Bonus Skill will allow Xinyan to deal 6 percent more DMG every 4 seconds a character is on the field. She will also take 3 percent more DMG. This effect has a maximum of 5 stacks and won’t reset if Xinyan leaves the field, but it will be reduced by 1 stack if she takes damage. Serpent Spine is a solid alternative to Redhorn Stonethresher as it focuses on Xinyan’s CRIT Stats. She will get an overall damage increase from this weapon.

Prototype Archaic will give a base increase of 6 percent to Xinyan’s ATK. Its Bonus Skill will give Normal and Charged Attacks a 50 percent chance to deal an additional 240 percent ATK DMG to enemies with a small Area of Effect upon hit. This can only occur once every 15 seconds. This weapon is the best Free-to-Play option for Xinyan and can be easily crafted. It is a great way to focus solely on giving Xinyan a boost to her ATK to deal more Physical DMG.

As a character who mostly dishes out Physical DMG, Xinyan can work well as a Sub-DPS to many different teams. She can also create Elemental Reactions with the Pyro DMG that she will deal from her Elemental Burst, allowing her teammates to defeat enemies faster. Here are some of our recommended teams for Xinyan.

This team will focus on the Elemental Reactions between all the team members. Xinyan will provide additional Physical DMG as well as Pyro Application to create reactions, while Eula will be the Main DPS who will take the reins. Kazuha and Kokomi will provide healing and crowd control, as well as create additional reactions.

In this team, Xinyan will work together with Razor, who will be the Main DPS, to deal significant Physical DMG to enemies. Bennett and Diona will provide support, healing and shielding the team to keep them alive, as well as create Elemental Reactions.