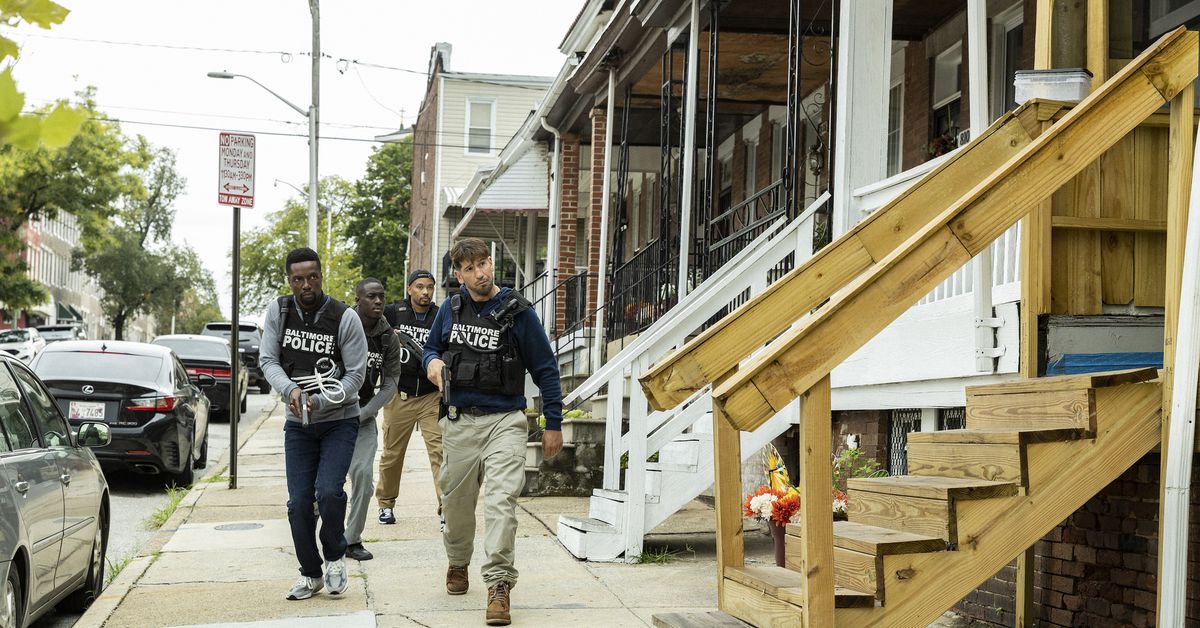 “Most police worth their shit, they can write their way out of anything,” Sgt. Wayne Jenkins (Jon Bernthal) smirks to a room of cadets in creators David Simon and George Pelecanos’ HBO crime series We Own This City.

It’s nearly played as a throwaway line by Bernthal, a dash that compounds a montage taking viewers through the systematic inequality and state-sponsored terrorism in Baltimore, Maryland: Baltimore city police harassing young Black men, the extralegal courts sentencing African Americans to harsh sentences, and the dehumanized Black men standing, petrified, in prison. In the six-episode limited series directed by Reinaldo Marcus Green (King Richard), Bernthal’s line explains the root of the problem and establishes the actor as the lone pulse in a dull and deliberate series that puts the system on trial but has little time for the people.

We Own This City is a ruminative show with a multitude of moving parts — too many, in fact. Justin Fenton’s nonfiction novel of the same name, adapted by Simon and Pelecanos (The Wire), is set in a city still reeling from the 2015 death of Freddie Gray and the subsequent uprising it spawned. See, ever since Gray’s death, crime is high and the arrests are low because cops are unwilling to leave their cars for fear their “good” policing will be mistaken for bad (what constitutes “good” policing is never wholly explained in the series). It’s left everyone on edge, still searching for answers.

The nonlinear narrative — spanning 2003 to 2017 and told mostly through Jenkins’ eyes, the nearest the series has to a main character — tracks four seemingly separate investigations. The first begins in 2015, with Detectives McDougall (David Corenswet) and Kilpatrick (Larry Mitchell) scoping a drug dealer. A mysterious tracker attached to the dealer’s car and a few careless whispers caught on wiretaps lead the investigators to the feet of Jenkins and his Gun Trace Task Force — a squad assigned to stop drugs and guns from proliferating on the streets only to resort to crime, theft, abuse, and drug dealing themselves.

At times, in its piecing together of the Rubik’s Cube of clues, We Own This City maneuvers like True Detective season 1, but with far less dexterity. The second investigation involves FBI agents interrogating smart-mouth former cops Momodu “G Money” Gondo (McKinley Belcher III), Jemell Rayam (Darrell Britt-Gibson), and Maurice Ward (Rob Brown) in prison. Each offers a different piece in the puzzle of Jenkins. In a show consumed with putting the system on trial, none of the actors are allowed the range to stand out. Instead, they’re cogs. And maybe that’s the point; these disgraced officers are just a few of the many bad apples. That, however, doesn’t make for captivating television — it only distances us from the complex mystery at the heart of the series.

A similar fate befalls Wunmi Mosaku (Lovecraft Country) as the nonspecific Nicole Steele, a lawyer from the Office of Civil Rights looking through complaints concerning brutal policing by BPD against Black folks. In a narrative concerned with men and the rampant machismo of BPD, Steele is one of the few female characters. But Mosaku is hemmed in by an incurious script that limits her ability to fashion a rich interior life for Steele. Though the lawyer talks with common people, even these conversations do little more than speak toward the glaring inequities of the system, instead of empathetically giving voice to the people most affected by it (the lone exception is a traffic stop where a Black child watches a police officer humiliate his father, thereby beginning the cycle of fear).

One of the few characters with any personal life beyond the force is newly minted Detective Sean Suiter (Jamie Hector) who’s investigating a murder of a young Black man in an alley. Suiter loves his job. And while we get to see his wife and two children, we just barely notice them. They appear in glances (there’s also an HBO Max documentary, The Slow Hustle, about his career and his family). At every level, We Own This City has zero interest in building out women, or quite frankly, anything that’s not a case.

Brimming with swagger for days, Bernthal is the script’s only non-casualty — probably because he’s such a great actor, and rarely has he been offered the screen time to really chew scenery as much as he has here. He imbues every scene with a wild, kinetic energy akin to a crab wading through the sand. His goatee and mustache are characters in themselves. Through this physically adept performance, we see how Jenkins enters the force in 2003 — tight back, straight and narrow gaze — slowly dissolve into the hunched, kingpin walk he assumes as he resorts to dirtier tactics in the years to come. Whenever Bernthal appears on screen, he actualizes the cyclical training leading already flawed cops to become worse ones. On his first day, his veteran partner, ambivalent to the shock in Jenkins’ eyes, tells him to forget what he learned in the academy: You take. You get paid. You destroy lives in the process. In another scene, which speaks to the rivalry between officers to get rich off poor Black folks, Jenkins arrive with a barrel of crabs for a cookout, only to be outdone and emasculated by his wealthier comrades. The moment spurs him to want more, and to push the envelope even further.

If We Own This City gets one thing right, it’s understanding the system. Not just the big bails, the stalking by police, or how BPD used seatbelt laws to illegally search cars to steal money — but the institution of arrests at all cost, and how an officer’s word means everything and nothing. Daniel Hersl (a totally underutilized Josh Charles) has 50 complaints against him but remains on duty because he gets arrests. The acting police chief wants reform without making the hard decisions. The narrative displays the vices — greed, sex, and drugs — that marked all levels of BPD, especially the Gun Force Task Squad.

That all unspools, however, whenever Bernthal slides off screen. The timeline is confusing and difficult to keep up with, and none of the other characters are memorable. The episodes drag in a six-part series that could easily be halved. With its pressing social issues and weighty mystery, We Own This City desperately wants to be The Wire and True Detective, but lacks the narrative panache to match the unbelievable twists and turns of the headlines the story is ripped from.

We Own This City premieres on HBO on April 25. New episodes air every Monday.