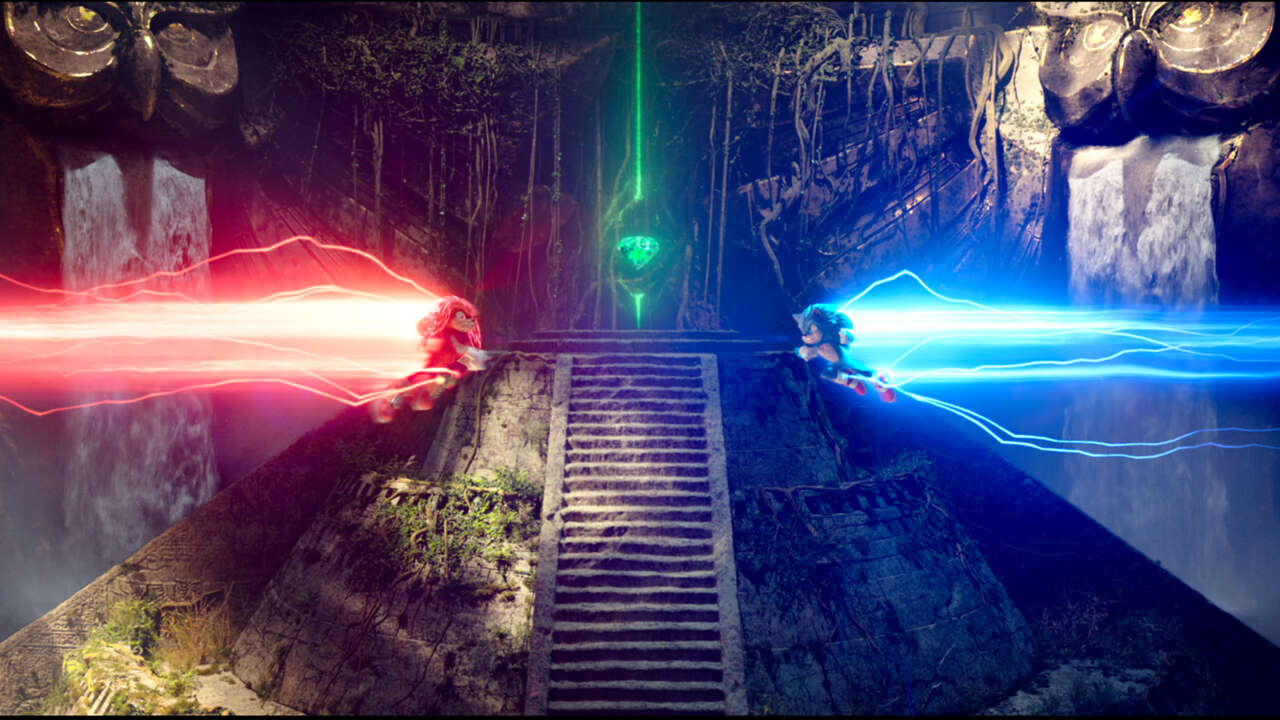 The engine that drove the first big-screen Sonic the Hedgehog adaptation was the way it combined the Blue Blur with a human buddy–making for a lighter Who Framed Roger Rabbit dynamic that kept the story about a cartoon space hedgehog with impossibly fast feet feeling relatively grounded. In broadening out the story in order to make a sequel, Sonic The Hedgehog 2 steps away from that dynamic and shifts it some, which simultaneously gives Sonic more room to breathe as his own character, and creates some derision in the overall story.

Sonic the Hedgehog 2 isn’t quite the breezy and fleet-footed romp that its predecessor was, packed as it is with all the characters of the last movie plus a few new ones, and at times that makes it feel disjointed and cumbersome. When all the threads start to come together near the halfway point, though, Sonic the Hedgehog 2 catches a stride that makes it just as much fun as the first film–and often more. Even when it isn’t quite as together, Sonic 2 subsists on a steady flow of jokes and gags, with director Jeff Fowler and the movie’s script leveraging its many characters in effective ways. They understand how to use its characters to keep things moving, and Sonic 2 sticks an over-the-top funny tone that makes even the weaker moments work.

Both Sonic the Hedgehog movies are about Sonic (voiced by Ben Schwartz) trying to find his place on Earth. After the events of the first movie, Sonic has found a home with humans Tom (James Marsden) and Maddie (Tika Sumpter), but the heroics of the last movie have left him trying to find ways for his alien superspeed powers to do more good in the world. Sonic 2 starts with the Blue Blur moonlighting as a Batman-like superhero in Seattle, but his improvised heroics wind up causing a fair amount of devastation. As Tom says in a father-son-ish heart-to-heart, Sonic still has some growing up to do; it’s a “with great power comes great responsibility”-type thing, with Sonic needing to realize his fun antics have actual consequences.

Before Sonic can really muddle through figuring himself out, his ludicrously over-the-top nemesis, Dr. Robotnik (Jim Carrey), manages to return from the interstellar exile into which Sonic and pals threw him at the end of the last movie. Robotnik has help from Knuckles the Echidna (voiced by Idris Elba), another alien whose people have been pursuing Sonic. The space hedgehog winds up with a new ally of his own, however, when yet another talking cartoon animal from space, two-tailed fox Tails, (voiced by Colleen O’Shaughnessey, reprising the role from the games), arrives on Earth to warn him of the impending threat of Robotnik and Knuckles.

Some backstory sets up the rest of the movie, although Sonic 2 does well to avoid getting too bogged down fleshing out space hedgehog lore. The Echidnas spent years chasing and fighting a tribe of owls, the last of whom was Sonic’s adopted mother, over a magical MacGuffin called the Master Emerald. Knuckles thinks Sonic knows where the emerald is (turns out, it’s on Earth, what a coincidence), and whoever lays claim to it will become all-powerful. So Sonic and Tails set off on a quest to find the emerald first, with the bad guys in pursuit.

The first Sonic movie was a buddy movie about Sonic and Tom and Sonic 2 gets a bit rehash-y in its first half as it finds a similar dynamic with Sonic and Tails. It even hits a few of the same beats–Sonic and Tails’ quest takes them to Siberia as they hunt for the next clue to the emerald’s location, and they find themselves in a tavern full of hostile Russians that is very similar to the bar filled with hostile bikers Sonic and Tom stopped at in the first movie. The scene is even the site of a fun bonding set piece between the new buds, just as before.

And though Sonic and Tails are fun together, their relationship doesn’t have the driving force that Sonic and Tom’s does, especially since both movies carry so many parallels. Tails’ view of Sonic is more like a younger brother worshiping an older one than that of two friends, and while that relationship evolves over time, Tails ultimately feels like a sidekick helping Sonic along, rather than the equal partner-slash-best friend that would strengthen the dynamic. The fact that the movie feels like it’s hitting the same buddy beats as the first Sonic highlights how Tails is a bit underserved by the story at large. Similarly, the reshuffling of Sonic and Tom’s relationship to be more father-son than best buds never quite lands. Sonic 2 doesn’t really spend a lot of time on Sonic and Tom in general, so the evolution of their relationship, and how it impacts Sonic’s character arc, feel like afterthoughts that only start to factor near the end.

Both of those issues are symptoms of the fact that Sonic 2 serves too many stories and characters, and it’s a long while before it all starts to mesh in a way that feels organic. Sonic is free to take off with Tails on a trip around the world because Tom and Maddie are off to Hawaii for the wedding of Maddie’s sister, Rachel (Natasha Rothwell), in a story move that initially feels designed specifically to sideline the humans so the animals have the run of the movie. There are a few scenes that are just moments of Tom struggling to deal with Rachel’s perennial hatred of him and to try to make a good impression on her groom, Randall (Shemar Moore). Eventually, the Hawaii thread becomes important to Sonic’s greater story and the human characters become a bigger part of the goings-on, but the movie takes a long time to get there.

The thing is, Sonic 2 gets away with feeling a bit fractured because it hits its marks on humor so often. The Hawaii digression pays off very well–eventually–giving Rothwell in particular a chance to shine. She was one of the funniest parts of the first movie but felt underutilized there, and she again gets some of Sonic 2’s best moments and lines. The movie also gets a lot of fun out of playing Knuckles against the somehow-even-sillier-than-last-time Carrey as Robotnik; Elba’s echidna is hyper-literal and constantly serious, like a cartoon Klingon, giving Robotnik plenty of opportunities to crack wise at Knuckles’ expense. The contrast between Knuckles taking the whole movie very seriously and Robotnik taking everything way past 11 leads to a lot of humor, especially when Sonic 1’s sycophantic Agent Stone (Lee Majdoub) is thrown back into the mix. Carrey’s amped-up goofiness still feels as out of place as it did last time out, like he was dropped in from a different movie, but the script is better equipped to leverage him, leaning into jokes and gags that play off the character as well as Carrey’s physicality.

Sonic the Hedgehog 2 could easily have gotten lost in its game references and spacey worldbuilding but avoids those pitfalls because Fowler and the cast know what’s fun about this idea. Likable characters, fast action, and plenty of solid gags keep Sonic the Hedgehog 2 on pace, even if that pace is a little slower and shakier this time around. What works about Sonic the Hedgehog 2 really works, and it’s easy to forgive its foibles because it’s just so much fun.