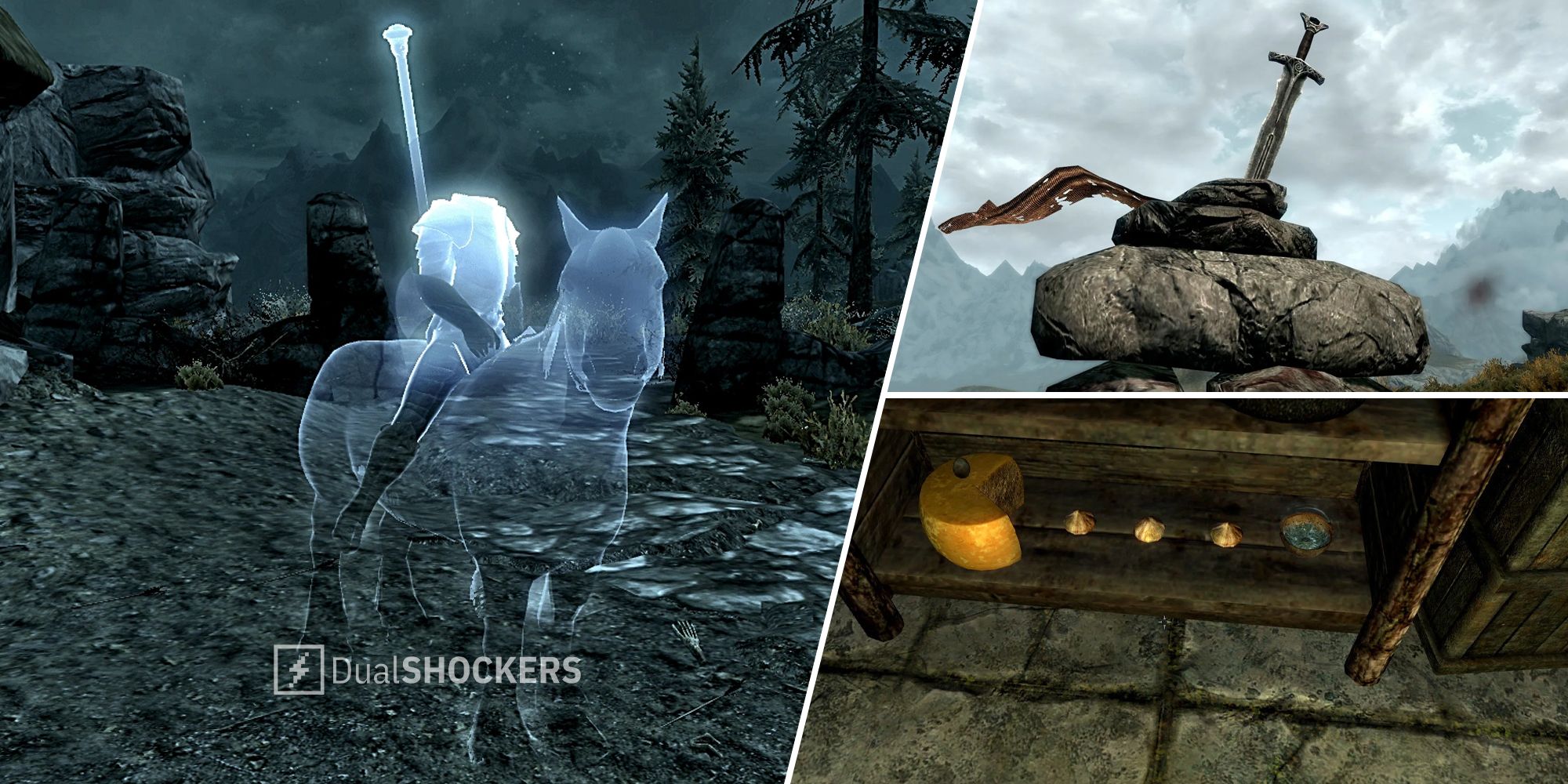 Anyone who’s played even an hour of Skyrim knows that it is packed to the brim with content. Amazing side quests, stunning in-game locations, and a multitude of items all culminate into one of the best open-world experiences of our time. These are all fine and dandy, but one aspect of the game that often gets overlooked is its abundance of hilarious, and sometimes sad, Easter Eggs!

For those unfamiliar with the term, an Easter egg is a hidden occurrence in a game, typically a nod to some real-world event or media. Naturally coming across and recognizing an Easter egg is an immensely satisfying experience, and Skyrim has some of the absolute bestin recent years! This list will go over some of the greatest Easter Eggs that The Elder Scrolls V has to offer!

10 The Imperials Strike Back

This reference to George Lucas’s The Empire Strikes Back is one of the most beloved Easter Eggs in Skyrim! Players who head over to Bleakcost Cave will be treated to see the hilarious scene of a skeleton frozen in ice, his sword on the floor below him.

Fans of Star Wars will be quick to recognize this as Luke Skywalker’s famous encounter with the Wampa at the Battle of Hoth. If you weren’t convinced yet of the similarities, note that the cave is guarded by a Frost Troll, barring a striking similarity to the Wampa!

In this hilarious Easter egg, players can see a true-to-form Pac-man made out of an entire cheese wheel. Pac-man can be seen chowing down on a row of garlic cloves, perfectly emulating the “dots” found in the original game.

To find this for yourself, head over to Markarth. Keenly placed on a shelf inside the home of Endon is this immaculatescene. Use your knowledge of classic arcade games to figure out what that nearby bowl of glowdust represents!

Players who want to see this Easter egg for themselves are in for a bit of an adventure! The Throat Of The World is the tallest mountain in all of Skyrim, and stuck into the stone at its peak is a unique pickaxe going by the name of the “Notched Pickaxe.”

The item is a clear homage to the creator of Minecraft “Notch”, which makes sense, as Skyrim launched during the same period of Minecraft’s original success! Unlike most other Easter eggs, this on offers an actual itemfor the players, making it a great one to visit. Just be sure to bring a horse!

This reference to the beloved Santa Claus is one of the most “in-your-face” Easter eggs in the entire game. After making their way to the end of Frossel Cave, players will come across a group of Reiklings worshiping what appears to be a statue of ice.

Upon closure inspections, players will be delighted to see that these Reiklings are all gathered around a hilariously half-hearted attempt at a Santa Claus recreation. A make-shift reindeer made of ice pulls a sleigh with a suspiciously Santa-esqe pair of fancy clothes sitting nearby.

Skyrim came out the same year as Portal 2, but that didn’t stop Bethesda from including an obvious reference to the game in Skuldafn. Don’t focus on this Easter egg too much, because truth be told, it is rather off-putting to see in a fantasy world.

Two potatoes are modified and placed strategicallyto form a hilarious recreation of Portal 2’s GLaDOS, the primary antagonist of the game. The Easter egg can be a bit difficult to spot, as it is lying inside the burning fireplace, but the reward is certainly worth it!

A sword of legend, Excalibur, is a fabled weapon of the fairy tale “The Sword and the Stone.” Deep in Rebel’s Cairn, players with a keen eye will be able to spot a reference to this blade in the form of a sword wedged deep into a pile of stones! However, unlike the fabled story, the sword is a breeze to remove.

But that isn’t the only location of Excalibur in the game. In an unmarked location near Bleakwind Basin, a skeleton’s arm reaches out of a small lake, wielding the same sword! This is an homage to the Lady of the Lake, a popular figure in the tale of King Arthur. Sadly, neither of these weapons are very useful, but their inclusion is wonderful nonetheless.

Let’s be real here: nobody actually follows the roads in Skyrim. Perhaps this is why most people have never encountered the game’s headless horseman, who wanders around the streets across the entire map!

The character is a reference to a story that almost everyone is familiar with, “The Legend Of The Sleepy Hollow.” If players choose to follow the Headless Horseman on his quest, they will be rewarded with some pretty good loot. So, no matter how tempting, don’t run in fear!

3 A Night To Remember

One of the funniest Easter eggs on this list is not a simple nod or reference, it is an entire quest based off of the script of the movie “The Hangover.” Just like the movie, this quest sees players travel all over Skyrim in search of their drinking buddy, all while fixing the issues they caused while drunk.

This is easily one of the most comical questsin the game, so much so that it seems almost out of place in Skyrim! Though, it is well worth it as players see some of the coolest sights that Skyrim has to offer. And, of course, a hefty reward awaits players who successfully complete the quest.

Almost everyone is familiar with the story of William Tell – the master archer who was challenged to shoot an apple off of his son’s head at long range. In true Bethesda fashion, Skyrim takes a crack at retelling this story via Easter egg.

To see this for yourself, head over to Swindler’s Den just west of Whiterun. Leaning against the cave wall is a stuffed ragdoll, clearly used for target practice, with an apple sitting on its head. Go ahead and take a crack at it! What’s the worst that could happen?

One of the most visually interesting Easter eggs in Skyrim can be found during the quest “The Mind Of Madness.” Players will encounter two characters, Sheogorath and Pelagius the Mad, engaging in a tea party.

Pelagius the Mad, along with the entire setup of the picnic, is a direct allusionto the Mad Hatter’s tea party in Alice in Wonderland. Everything from the clothing of the NPC’s to their names makes this a wonderfully charming Easter egg for fans to discover!

2023 Will Be Full Of Soulslikes, And I’m Already Tired