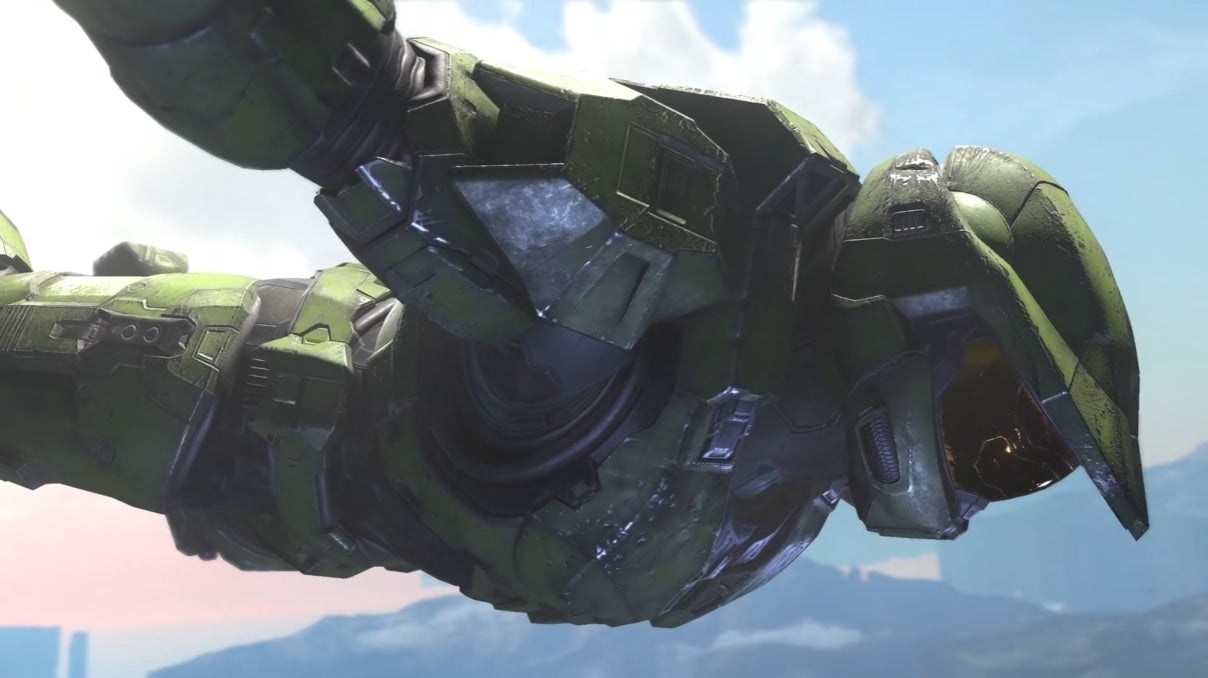 Halo Infinite’s campaign is about the spaces in-between. Open worlds live or die on those in-between spaces, don’t they? What is the value of an open-world littered with objectives that are clearly displayed on a map screen, if there is nothing between the objectives to stumble upon, to lead you off the path of least resistance? What secrets will you uncover on this broken ring, if there is no sense of mystery to their discovery?

I’ve played Halo Infinite’s campaign for a handful of hours now, taking in its first four missions and a generous dollop of exploration, and I’m still searching for that spark in the in-between places. Not the Guilty Spark – that relentless chatterbox can do one. I mean the kind of spark that surprises and delights.

Because in going open-world, developer 343 has opened a can of worms. Like a Pixies song, Halo campaigns have always been about oscillating between loud and quiet. 30 seconds of fun in a bowl of a combat arena, the golden triangle of shoot, melee and grenade in perfect harmony with the player and controller – and then, chill. Halo campaigns have also been linear affairs with the illusion of open-worldness. Some of the series’ most famous levels feel open-world, have that magic to them, but under the hood they’re missions in the classic first-person shooter style, with a beginning, middle and end, loud and quiet waving up and down with the start and end of each fight.

Halo Infinite aims to capture that feel, but spreads it out across a chunk of a Halo ring. This time Master Chief – and 343 has smartly made sure Master Chief is the playable character throughout the entire campaign after the backlash to the much-maligned Agent Locke from Halo 5 – can go anywhere, any time, and take on side objectives in the order the player sees fit. As a Halo fan schooled on the way Halo used to be™, it’s an initially jarring experience.

Is it a good one? My time with Halo Infinite can be broken into two parts, much like Zeta Halo itself: what is gained by this seismic shift to open-world-ness, and what is lost. As Master Chief’s chirpy new Cortana-like AI would no doubt say, let’s start with what is gained.

Halo Infinite quite clearly harks back to the Halo of old. Its colour palette and art style rekindles memories of Halo: Combat Evolved. It starts off with a fight against the Covenant – or an off-shoot called The Banished – on an alien warship that orbits a mysterious Halo ring. Eventually you land on the ring and take the fight to the Banished forces – Grunts, Jackals (those bloody snipers!), Elites and Brutes all report in for duty. Slide around in a Warthog, UNSC soldiers marvelling at your air time – it truly is combat evolved. There is even a moment in which Master Chief surveys the battlefield from inside a Pelican, ready to leap into action. 343 may as well scream ‘remember the Silent Cartographer level everyone loves? This game is like that!’ down your headset.

This is not a critique. Rather, I’m delighted 343 has looked to the past as it reimagines Halo’s future. I think it’s fair to say the studio’s work with Halo campaigns up to this point has been divisive. Halo Infinite makes significant changes to the Halo campaign formula, yes, but it is rooted in the familiar. It feels like home, one you’ve been trying to get back to for some time.

The gunplay, too, feels reassuringly familiar. Actually, it’s better than that: this is the best Halo combat has been since 343 took over the mantle of responsibility from Bungie. It’s back to basics but with new tools that feel wonderful to play with. Much has been made of Infinite’s grapple hook when it comes to the multiplayer side of things – it’s just as much fun to use in the campaign, and does change how you think about combat. Say you’re approaching a Banished-held Forward Operating Base – you’ll do this a lot. The grapple hook means you can build your own entry point to combat. And when in combat, no enemy is ever out of reach – use the grapple hook to snag a pesky sniper and whiz over to it for a quick melee kill. Halo Infinite’s combat rocks, I’m delighted to report. It’s a happy chaos, Master Chief dishing out super solider-powered death even as Grunts deliver their sometimes hilarious one-liners. See that Elite riding that Ghost over there? Grapple onto it for a quick jack. Flip that switch and the disco ball comes down for a quick bout of bust-a-move – or a Brute’s mouth.

What else is gained? Halo Infinite has a dash of the Ubisoft open world about it. I can feel some readers recoiling in horror at the phrase. Yes, there is that hoovering the map of icons feeling to Halo Infinite. I feel compelled to liberate the Forward Operating Bases even though they’re non-essential to main quest progress. After all, retake a FOB and you reveal more icons in the surrounding area of the map. This I am trained to want to do. High value targets – specially named Banished enemies who have, brace yourself, shields and health bars above their character models – reward Valor upon death. The more Valor you gain, the more vehicles and powerful UNSC soldiers you’ll have access to at a FOB. There are Banished outposts to take down and other icons denoting bits and bobs to “complete”. In between main story missions, Master Chief’s quest is to dent the Banished’s occupancy of the ring, map icon by map icon.

All this, all that Halo Infinite has gained, combines in the first five or so hours to form a fun but not quite spectacular sort of open-world Halo game. Infinite is sickly sweet – it feels so nice, controller in hand – but it has yet to wow me. No main mission I’ve played so far has truly grabbed me. The Tower, the fourth main mission and the limit on what I’m allowed to talk about at this point before review, offers a tantalising tease of what Infinite may flesh out further down the campaign line, with its upwards-spiralling innards and tense boss fight a welcome change of scenery and pace. But the Silent Cartographer can rest easy as a campaign height Infinite has yet to reach – for now.

Which leads me neatly onto what is lost. In going sort of open-world, Halo Infinite’s campaign doesn’t have quite the same bespokeness of previous entries. Of course it doesn’t! FOBs are FOBs. Outposts are outposts. Infinite gets away with it because the combat is so much fun, but I can already feel that tinge of repetitiveness seeping in. I’m hoping the campaign mixes things up the further you get into it.

I’m also hoping for some variation in scenery. You can look up and the Halo ring is right there, shooting up into the sky and wrapping itself behind you. It’s a sight to behold, but that classic Halo ring landscape – beautiful, vast hills and streams, wide open areas littered with trees and jutting Forerunner architecture – could do with a shakeup at some point later in the story. I hope it’s coming.

And, crucially, I’m still searching for that spark in the between spaces. So far, I’ve been hurtling around the ring going from objective to objective with only the occasional pause. There are audio logs and Spartan cores to find and some of these are smartly hidden within Zeta Halo’s nooks and crannies, but I’m talking here about stumbling upon true sci-fi alien wonder. This ring has jaw-dropping secrets – Infinite’s story revolves around digging them up, it seems. I hope some of them can be missed, because it’s in the risk of missing the magic that encourages us to seek it out.

What Are You Playing This Weekend? – Issue 423