House of the Dragon episode 7 review: Three funerals and a creepy wedding 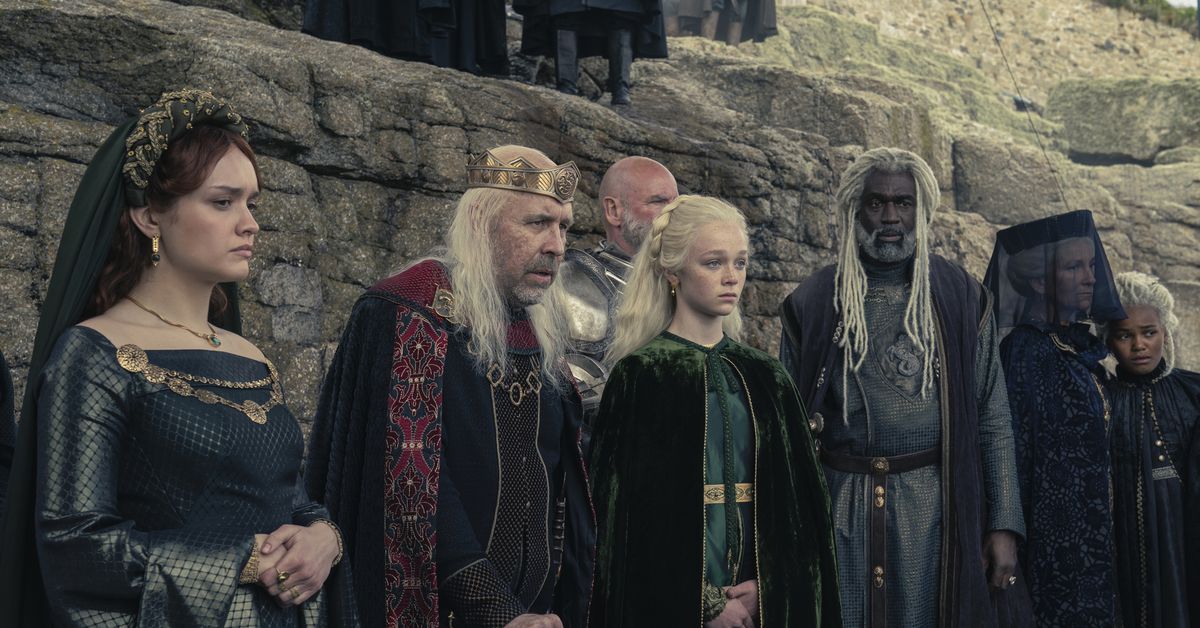 Laena Velaryon, her brother Laenor, and a man whose name we never learn. While House of the Dragon’s seventh episode does a great deal to show Westeros sliding uncontrollably toward what will surely prove a calamitously bloody war, its own body count is comparatively modest by the series’ standards.

Its single on-screen death, that of the nameless man whose neck is broken as part of a complicated gambit to fake Ser Laenor’s (John Macmillan) death, is a case study in the episode’s preoccupation with social rituals as a means of concealing and revealing truth. Laena’s funeral provides her uncle with a chance to launch a veiled barb at Rhaenyra (Emma D’Arcy) over the parentage of her sons. Rhaenyra’s secret marriage to her uncle Daemon (Matt Smith) serves to inflate her reputation as a ruthless power player, and sir Laenor’s duel with his lover Qarl (Arty Froushan) provides cover for their bittersweet escape from the bloody power games of the royal court. Everywhere we turn, the rituals and ceremonies which bind the people of Westeros into a society are being subverted by personal agendas.

That the episode keeps so many plates in the air at once while also managing to slow down after the breakneck pace of last week’s installment is something of a minor miracle, but director Miguel Sapochnik and writer Sara Hess pull it off with aplomb. From the somber but politically charged opening funeral scene to the darkly majestic and disturbing claiming of the dragon Vhagar by the young prince Aemond (Leo Ashton), “Driftmark” moves at an effortless clip. Its setting, the maritime seat of House Velaryon where the royal family has gathered to mourn, gives the whole affair a sense of the Gothic, as does the return of gaunt, cadaverous Rhys Ifans as Otto Hightower, hand of the king. It’s more than a little reminiscent of The Masque of the Red Death, these inbred nobles scheming, trysting, and dueling in their remote palace as the realm teeters on the brink of the abyss.

At no point does the future seem a bleaker prospect than during the episode’s centerpiece action scene, a scuffle between the royal children that goes from bad to worse in — ahem — the blink of an eye. When Prince Aemond returns victorious from mounting Vhagar, Rhaenyra’s sons and Daemon’s daughters waylay him in the dungeons of Driftmark. The scene is lit and shot like something out of Neil Marshall’s The Descent, torchlight flickering over the faces of the young heirs to the Targaryen dynasty as their childish squabble rapidly turns bloody, fists and feet giving way to rocks and knives. It’s enough to make Viserys’ (Paddy Considine) plea for a return to the family’s status quo seem almost comically out of touch, a referee trying to stop World War II with a whistle. Ashton makes a strong showing as Aemond, his every look and gesture freighted with the sullen resentment of his status as a dragonless second son, and he’s as unpleasant a winner as he is a sore loser, brutalizing and insulting his younger cousins with towering contempt.

It’s easy enough, watching Olivia Cookie as Alicent, to see where Aemond gets both his temper and his attitude. The brittle, dysfunctional woman Rhaenyra’s one-time childhood friend has become as an adult finds her time to shine in the aftermath of the childrens’ squabble, dissolving into a hysterical rage and demanding one of Rhaenyra’s son’s eyes in exchange for Aemond’s. Again the episode chooses a ritual — the most elementally basic, the literally Biblical tradition of an eye for an eye — as the focus of its conflict.

Through the ritualistic demand we get a glimpse of the real Alicent, a confused and frightened woman left in a permanent state of panic by her father’s abuse. The final conversation between parent and child is a direct parallel to the moment of honesty between the princess Rhaenys (Eve Best) and her husband Lord Corlys (Steve Toussaint) after their daughter’s funeral, with Rhaenys repudiating her husband’s ambition to seat his own descendants on the throne. Otto instead encourages his daughter’s unbalanced behavior, saying it shows fighting spirit. His delight at her evident unwellness is perhaps the episode’s most sickening sight, a further deception concealed behind his somber façade and the arcane traditions of the royal court.

PlayStation 5 Firmware 4.03 Has Been Jailbroken