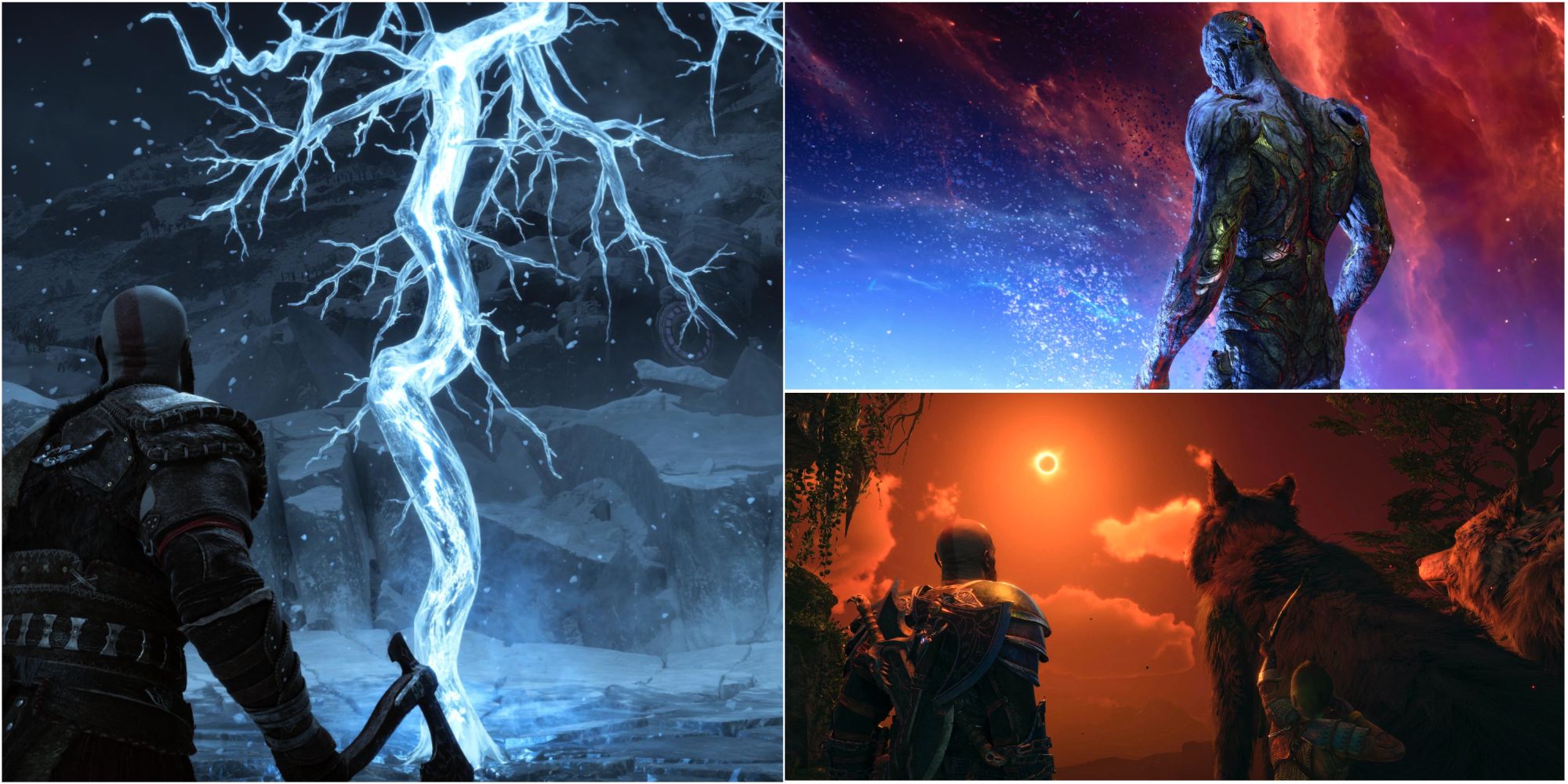 The nine realms have never been as beautiful as they are in God of War Ragnarok. As Kratos and Atreus navigate these drastically different worlds and discover all the beauty they hold, there is hardly a moment where you don’t want to just sit back and soak it all in.

Each realm is full of beautiful vistas and larger-than-life cutscenes that really demonstrate the scale of the series’ storytelling. Here are the most breathtaking moments in the game.

** There will be major spoilers for God of War Ragnarok in this article! **

Early in the game, Kratos and Atreus journey back to Alfheim and the Temple of Light. Here, they battle countless hordes of light elves in their search for answers. As they climb through the temple, they eventually come to a large beam of light shooting out of the water below.

The light is a byproduct of the souls in the underworld and first showed up centuries ago when there was just one elf race. After realizing the power in the light, the elves split over their philosophy on whether it should be used or not. Those who use the light become the light elves, and those who do not the dark elves. The one constant in the equation was the beautiful pillar of light emanating from the temple, captivating anyone lucky enough to see it.

Upon journeying to Helheim again, Kratos and Atreus run into an old “friend,” Hraesvelg. This Jotunn eagle is the current ruler of Helheim, tasked with preventing the horrors of the realm from escaping. Kratos first encountered her in the 2018 game, seeking answers for how to cure a very sick Atreus.

This time around he is looking for her help in taking on Odin and needs her to lend them the armies of Helheim in order to beat him. In exchange, they offer to find her replacement, so she can finally be free of this never-ending job. Despite her intimidating size and appearance, this is one of the most beautiful scenes in the game.

Older and more confident, Atreus often sneaks away from his father in search of answers about his fate as Loki. On one of his missions, he finds his way back to Jotunheim in search of the Iron Wood he learned of from The World Serpent, and the clues he may find there.

As he navigates the realm, he comes across a vista where he can see the Jotunheim Fingers. In the 2018 game, Atreus traveled there with his father to spread his mother’s ashes per her dying wish. Last time, they didn’t get to see the full view of them since they were on the fingers themselves. This time around, you can see them from afar in a truly stunning moment in the game.

After deciding to help Odin, and hopefully find some answers for himself, Atreus navigates to Helheim. Here, he searches for a piece of the mask Odin is using to understand what lies beyond the realms. Atreus approaches a sleeping Garm only to realize what he needs is behind him.

Related: God of War Ragnarok: How To Beat Garm

Overconfident, he decides to free him so that he can get what he thinks lies behind the sleeping giant. This turns out to be a very bad decision as the soulless beast immediately wreaks havoc across the realms. Later, Atreus and Kratos subdue Garm, and Atreus places the soul of his lost wolf, Fenrir, into Garm to calm him. Garm becomes Fenrir, stops his mass destruction, and becomes a powerful ally to Atreus and Kratos.

First seen in the 2018 game, the World Serpent Jormungandr makes a return in Ragnarok. Atreus ventures off to see him in search of answers to his own fate, this time taking Sindri with him as his companion.

As Jormungandr wakes to Atreus’s call, Sindri and Atreus take cover as he barrels through the now-frozen Lake of the Nine. Speaking the giant’s language, Jormungandr tells Atreus to look for Iron Wood. While incredibly vague at first, this clue leads Atreus to find another path to Jotunheim, where he eventually finds a fellow giant, Angrboda.

When Kratos is first battling Thor at the beginning of the game, Odin uses the distraction to invite Atreus to visit Asgard. Although Atreus initially does not consider this invitation, later he takes him up on it in search of answers Kratos is denying him.

When he arrives in Asgard, he does so haphazardly and finds himself far outside the city. The only way to get to Odin is for him to climb the massive wall and reach the city behind it. As Atreus approaches the wall and looks up, he is met with an equally intimidating and stunning sight of the immense challenge before him.

Ragnarok’s story picks up three years after the end of the first game, and Kratos and Atreus are hiding out in their house in Midgard. Not long after you start playing, Thor shows up at their doorstep to confront them about murdering his sons. Initially, he does not attack them, and instead comes into their house and wants to have a peaceful conversation, offering them mead to share.

Related: God of War Ragnarok: How To Beat Thor Part 1

After Odin arrives and offers a hollow gesture of peace, Kratos denies it and the battle between him and Thor ensues. Wielding a lightning-charged Mjölnir, Thor swings his hammer at Kratos. At the same time, Kratos swings his frost-charged Leviathan Axe. When the two collide, a lightning bolt comes down from the clouds and is instantly frozen in place. Inside the ice, you can still see the lightning jumping around as Kratos and Thor continue their battle.

Late in the game, Kratos and Atreus journey to Musphelheim to ask Surtr to help them stop Odin. Surtr and his lover Sinmara were fated to combine into one and become Ragnarok. For centuries, they have stayed separate from each other in the hope of preventing this from happening.

After hearing Kratos and Atreus’s plea, Surtr realizes there is no choice; Ragnarok must happen. He decides to not involve his lover and becomes the monster himself. Equipped with Sinmara’s heart in his chest, he uses the loophole to become Ragnarok. As he looks down into the endless void of The Spark of the World, what appears to be galaxies swirl around him. He takes one last moment to soak it all in, before hurling himself into the void and becoming the monster.

In one of the best main story quests in the game, Kratos and Atreus encounter the celestial wolf deities, Sköll and Hati. The two are the wolves that chase the sun and moon in the sky, bringing about the change from day to night, and night to day. When they find the wolves, they are sleeping in Vanaheim, and the world is essentially stuck in perpetual daytime.

The story goes that the moon was captured, causing the wolves to no longer fulfill their daily purpose. After finding the captured moon and freeing it, the wolves wake up. Following this, a full eclipse occurs as the group stares up into the sky. At this moment, Atreus shoots an arrow at the eclipse and the wolves chase after it. This causes the day to change into the night in the most beautiful, cinematic moment of the game. As a reward, Sköll and Hati give them a tool that allows them to summon day or night at will.

Next: God of War Ragnarok: Most Brutal Takedowns, Ranked

The Cast Dress Their Parts