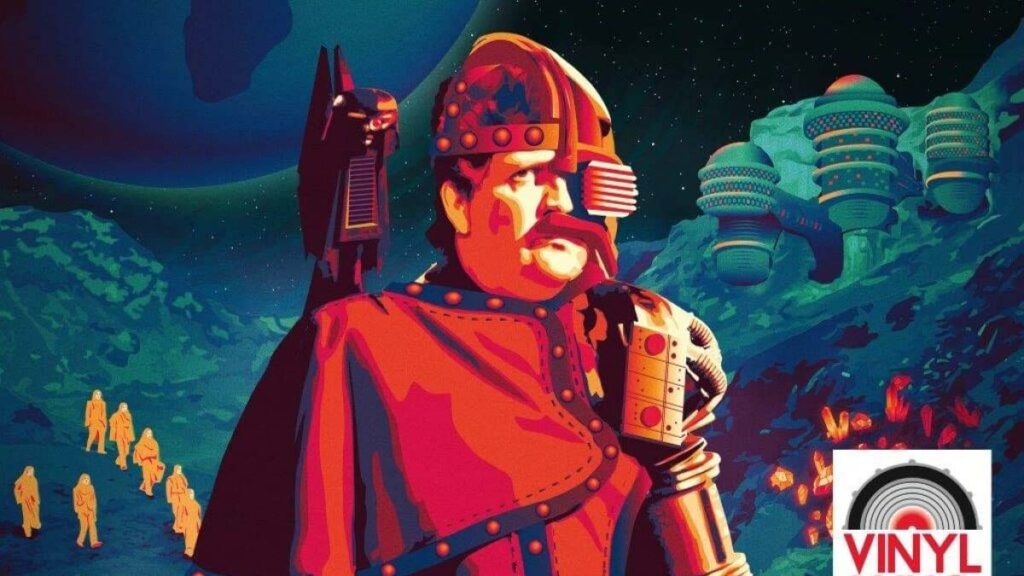 The latest classic ‘Doctor Who’ story to be released on double vinyl by Demon Records is the 1978 ‘Key to Time’ instalment ‘The Pirate Planet’. This one has linking narration provided by the ‘voice of K9’, actor John Leeson (though we should point out that he’s using his own voice, and not recreating K9’s dulcet metallic tones!).

In this story, the Doctor (Tom Baker), Romana (Mary Tamm) and K9 (John Leeson) arrive on an alien planet in search of the second segment of the Key to Time. However, the topography is not how the Doctor remembered it to be. Over the course of the story, he realises that the planet is under the surface of an imposter planet, which is hollowed out and has been piloted throughout the cosmos. The ‘pirate planet’ then absorbs the mineral wealth of the planets it swallows, reducing them to condensed fragments that are kept aboard the Pirate Captain’s bridge.

There is an immense amount to like about this adventure as an audio experience. Although Tom Baker was always electrifying as the Fourth Doctor, he sometimes found it hard to resist the temptation to give a large performance, especially when there is a comedic element to the script. This one is penned by none other than Douglas Adams, who was about to become incredibly celebrated as the creator of ‘The Hitchhiker’s Guide to the Galaxy’. Needless to say, the script is witty, inventive, original, and Tom Baker loves it!

Another actor has risen to the challenge set by Tom Baker and gives an even more operatic performance. Bruce Purchase’s Pirate Captain is loud, brash, and at times even pantomimic. Yet, within the confines of the world created by Douglas Adams, it works brilliantly. With John Leeson filling in the gaps, you’re left enjoying the story through sound only, and this really lifts out the performances of Tom Baker and Bruce Purchase and enables you to focus on the words they deliver. The Pirate Captain has all the best lines, and his increasingly extravagant curses are a particular joy. In contrast, Rosalind Lloyd’s Nurse is restrained and serious, which makes her much more sinister than she otherwise would be.

As well as highlighting the enjoyably theatrical performances, another advantage of listening to the story is that your imagination is much better at filling in the visuals than the low-budget production would boast on screen. Thus, dodgy special effects such as floating spanners smashing machinery aren’t distractingly awful, and K9’s fight with an electric parrot isn’t laughably bad. In fact, it sounds almost heroic. Director Pennant Roberts was never known for his visual flair, and this shortcoming is circumvented on audio.

As with the original radio production of ‘The Hitchhikers Guide to the Galaxy’, Douglas Adams’ work for the BBC is often best enjoyed as an audio experience. We found we had a deeper appreciation for just how fresh and funny his scripts are by listening in alone. That the production didn’t live up to the script simply isn’t an issue with this release.

‘Doctor Who – The Pirate Planet’ is available on two 140g vinyl records, with distinctive ‘sky demon splatter’ effects. In common with other titles in this range, the cover art, depicting Bruce Purchase as the Pirate Captain, is splendid and eye-catching. Lovely details include the Mentiads descending the hillside in the background. It’s time to hear with fresh ears this gem from 1978.