Destructoid’s 2022 Community Game of the Year goes to… – Destructoid

Hot game award results made in less than a week

It feels like 2022 was the year that everything that we had been waiting for since before the pandemic came out. Maybe it was studios hitting their stride with remote work or independent developers’ work through the pandemic finally coming to fruition. Or maybe it was higher-ups forcing releases for profit’s sake; who knows? The end result was that we saw a veritable glut of games released this year, and after the Destructoid staff voted on their pick for Game of the Year, we put the vote to you, the readers. Like the number of games released this year, you came out in droves and cast your vote like we all live in good fair democracy.

For those that didn’t read the original vote article, we use a weighted voting system here which means you get to vote for your three favorite games of the year. Each one, depending on where our voters placed it (1st, 2nd, 3rd), received a number of points (3, 2, 1, respectively), and the points were tallied up to determine a winner. As is tradition, we will highlight the top five results with blurbs written by a mix of staff and selected community members. So without any further pomp and circumstance, here are your results:

While Kirby and the Forgotten Land was nominated for the best Switch game of the year, it ultimately lost out to Xenoblade Chronicles 3. Thus, staff writer CJ Andriessen became a man denied his ability to talk about the adorable pink ball that loves to eat. Here now he talks about the past present and future of the storied series.

When console gaming made the jump to 3D, most of the big name franchises in the industry made the jump with it. Mario, Zelda, Sonic, even Bubsy redefined themselves for the third dimension, laying the groundwork for the gaming as we know it today. But HAL Laboratory and Nintendo hesitated when it came to Kirby. The pink puff flirted with 3D gaming in a few of his spin-offs and mini-games, but the mainline series of games kept to a mostly 2D plane throughout the various console generations. With Kirby and the Forgotten Land, Kirby finally made the leap, and hot damn did he stick the landing.

Forgotten Land is arguably the best Kirby game ever made, with outstanding level design, impeccable controls, and near-perfect execution of Kirby’s new Mouthful Mode. It is, in my book, exactly what a 3D Kirby game should be. And while his 2D adventures will always live on in my heart (and on my Switch), Forgotten Land represents a shiny new path forward for Kirby and I can’t wait to see what HAL Laboratory comes up with next.

Whether you were saving Waddle Dees throughout the New World or serving them some food in one of the mini-games you unlock throughout your adventure, Kirby and the Forgotten Land is one of the best all-around packages in gaming from 2022 and a shoe-in for any gamer’s top 10 list.

Hey, look at that! I played a game that made it into the top five, so now you get to listen to me talk about the indie extravaganza that set off an entirely new genre of indie games, Vampire Survivors!

One of my favorite features of Steam is the ability to see what my friends are buying and playing. I do admit that at times I can get caught up in the hype and buy a game just because everyone else is playing it. That is how I came across Vampire Survivors through sheer force of peer pressure. And for that, I thank all my Steam friends. Sometimes peer pressure is good, y’all!

With a mix of roguelite and bullet hell, Vampire Survivors is a perfect game for both “pick up and play” sessions as well as “holy crap where did the last two hours go?” ones, as well. The deceptively simple gameplay of dodging enemies and projectiles gets a great boost from theory-crafting builds which gives you enough rope to hang yourself with. It’s also very telling how popular it is since multiple clones of it with different skins have been popping up in the months since it was released. Additionally, according to one of our community members, its single-stick play makes it a fantastic game from an accessibility standpoint. With all of this combined, it’s no wonder it made it into the top 5 of our community poll!

Third place for the third game in the third series that’s all about killing God. What providence! Long-term readers will know my weeb days are long since behind me (Nier doesn’t count) so I enlisted the help of SikyWiggedHero who wrote a summation of the game so good it has almost enticed me to play it:

Xenoblade Chronicles 3 is a big game in just about every sense. A massive open world. Hour-long cutscenes. 13 hours of music. So many combat mechanics, they could form several smaller JRPGs by themselves.

It’s a titan. Yet its massive scope would ring hollow if it wasn’t for its intimate focus. Opening with what’s quickly becoming an iconic scene, the narrative soon settles on a party of six playable characters and their struggle to find meaning in their lives as they are hurtling toward their deaths. The narrative twists and turns feature enough existential crises to fill an Evangelion fan convention, yet it’s wary to lose focus of the intimate relationship each party member forms with one another, as well as the world around them. These relationships propel the game’s biggest moments, from heartbreaking losses to triumphant victories. In Xenoblade Chronicles 3, a huge world is built around small, intimate, and affecting stories.

Probably either the most or at least second most anticipated game of the year gets the second spot in our community poll. Woefully I’m still behind on the new series so we got the PatBateman to stop preening himself and feeding cats to ATMs to talk about what the sequel meant to him:

Like its predecessor, Ragnarök reminds me why I love gaming.

GoW and Ragnarök both start with epic boss fights to set the tone of the game and immediately provide a hook. I’m mainly here for a story that’s going to rip my heart out, and seeing firsthand Kratos’s struggles as a father and Freya’s unending grief as a mother, really hits home. The characters are so real, the environments are varied and gorgeous, throwing and retrieving the axe let me live my Thor fantasy, and anytime things get too tense, Mimir tells a hilarious story. GoW 2018 remains an absolutely brilliant game, and I feel like the studio pulled off another gem with Ragnarök.

Surprising absolutely no one, Elden Ring took the top spot. Everyone’s favorite resplendent Grandmother and Lead Moderator Occams Electric Toothbrush provides the color that we’ll paint on the inside of the eyelids of this (un)holy combination of Miyazaki and George RR Martin:

Smarter people than me have written some brilliant pieces on Elden Ring. They have waxed poetic on the beauty, the mystery, and the scale of it all, and I couldn’t agree more. I’m a simple creature, but I know when something is special. It’s that gut feeling and I’ve trusted in it for years now. The moment I stepped out into Limgrave from the tutorial area, I knew it was going to be special. And it was for so many of us. Elden Ring could have been just good and we’d have loved it.

But instead, Miyazaki and his team went and gave us another masterpiece. I can’t fathom what it takes to make a game like Elden Ring. It’s just too much for the grocery bag full of doll parts I call a brain. But I can recognize brilliance. And apparently, y’all can as well.

Now everyone who voted for Victoria 3‘s favorite thing…numbers! Oh, by the way, I’m disappointed in you all. It got one vote for third place. Consider you all shamed. Below are the top 50-ish games with the point value they each received. As you can see Elden Ring beat the crap out of everyone. 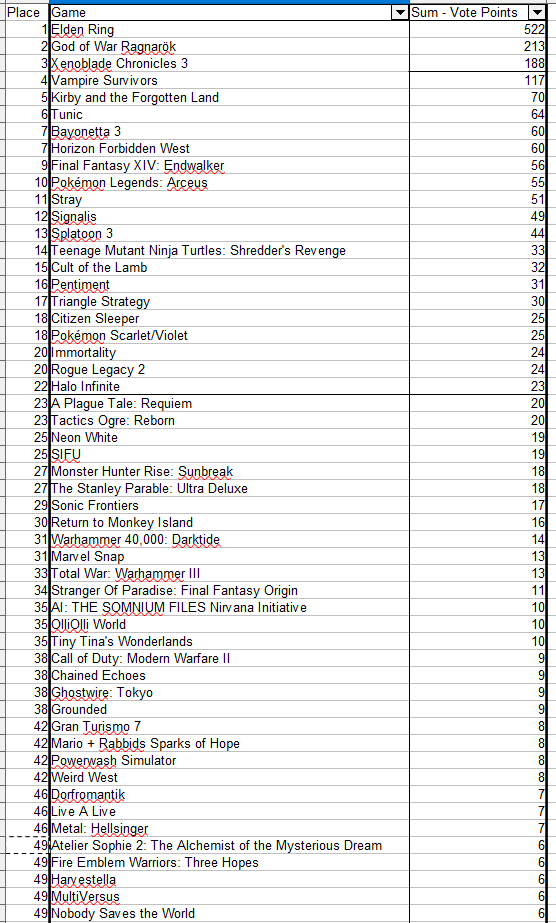 Look at how close Tunic came! Also, sad that our boy Jack couldn’t get it done with Stranger of Paradise but that’s probably Chaos’ nefarious meddling…damn them!

Thank you as always for voting and reading through a very tumultuous year here at Destructoid. We love our community and readers more than anything, and this place simply wouldn’t be the same without all of you. Best of luck in the coming year and remember that balancing long-term economic growth with a steady stream of construction is the path to victory in Victoria 3.

Contributor for Dtoid and news editor of Flixist. Lover of all things strategic and independent.