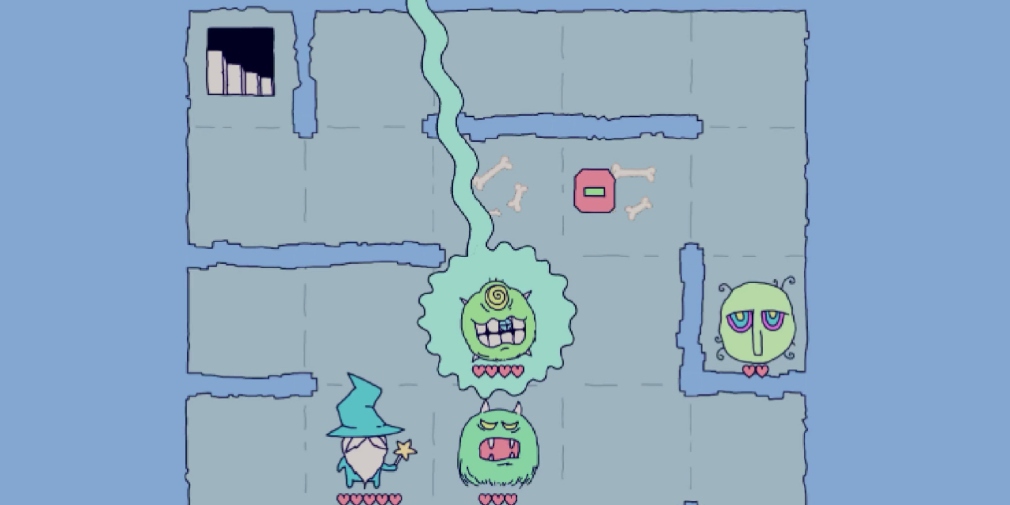 Loopy Wizard is the latest effort from indie developer Jesse Vebrux. It uses the same concept as his previous game, Seven Scrolls, but aims to be slightly more accessible than its predecessor. Our App Army thoroughly enjoyed Verbux’s last outing, so we decided to hand Loopy Wizard over to them and find out what they thought.

Here’s what they said:

This is a fun time-waster which involves killing enemies with spells while trying to escape to the next level. The graphics are bright and cheerful, the gameplay easy to pick up (with the help of an easy to follow tutorial), but the sound effects weren’t to my liking and I turned them off. There are various spells to win when you kill enemies and some enemies give you a life heart when they’re dispatched, allowing you the opportunity to carry on playing. There’s really not a lot more to say, except it is fun to play and I found myself picking it up when I had a few minutes to spare but didn’t want to dive into anything too immersive.

Loopy Wizard is a turned based dungeon crawl that can be frustrating at times. The playing area is a square that is subdivided into smaller squares and you must guide your wizard, one turn at a time to reach the exit. Random monsters and walls complicate your route. Above the playing area is a clock, where spells you pick up from defeated monsters go. As each turn is completed the hand of the clock moves allowing you to access the spell the hand points at.

Games tend to be over quickly. Monsters regenerate, so it’s best to reach the exit quickly. Also if you kill all the monsters in the playing area and the clock hand points at a damaging spell you have used it on your wizard. This can be very frustrating, especially when your wizard is low on health. Graphically simple, the game is addictive and has that one more go vibe as you try to improve your score. I can see myself playing this game for a long time.

As a rule, I can’t be bothered with score-chasing games, e.g. roguelikes where you lose all your progress and start again when things go wrong. However, the (highly original to my knowledge) core mechanic in Loopy Wizard is so compelling that it keeps me coming back for another attempt.

You have a ‘clock’ of spells at the top of the screen, and the clock hand goes around each turn. If you can cast the spell it’s pointing at, you have to, **even if that means casting it on yourself**. So, that instant-kill spell which seemed so cool when you first picked it up? When it’s time for that spell, if there are no enemies, then you’re pointing that gun at your own head and pulling the trigger.

I’ve learned that often the best spells are ones which neutralise the enemy rather than kill them, and cloning yourself is very useful too since your clone can take the heat if necessary. But, just the order in which spells appear on the clock can make a big difference – it’s an emergent-gameplay sort of a game, built from simple ingredients but with unpredictable consequences.

So, I’m unusually hooked, but will probably tire of it in a day or two, after a particularly long run – it will just be too painful to start again. If it had *any* kind of XP-based permanent progression (a rogue-lite rather than a roguelike) then I would probably get full-on addicted and not play anything else for the next few weeks. In either case, it’s a very original game with a very compelling core mechanic.

I played the game a lot because the artwork is super cute and the music is catchy. LW is turn-based, and your goal is to guide the wizard to the next level of the dungeon while dodging or attacking the monsters that populate each level. On your way down, you can pick up spells that you can use to your advantage, or hearts to refill your life points. The game is challenging especially at the lower levels, but I never found it frustrating. I also saw a lot of replayability. In a nutshell, this game is a gem. It is totally worth it.

This game is best described as a roguelike puzzle game. You move a wizard on a grid with several monsters moving to attack you. If you see them, you attack automatically. As will they if they see you. It works like a sliding game, moving from square to square trying to get to the stairs to the next floor. It is a lot harder than it sounds! This game is fun and infuriating.

Just like Seven Scrolls, this is great fun. Simple to pick up, fast, five (or less) minute bites of dungeon crawling and fighting and/or dodging various monsters. The art/animation is cute, the music is cute. The spells are imaginative and useful. I do recommend that you check out the help button to see what each one does. It’s a fun cross between fighting it out (you’ll lose eventually but rack up an impressive score) and fighting your way to the exit.

The controls work fine. The only problem I had was remembering that this is turn-based… what I found myself doing when I forgot that was hurrying through tactical decisions and messing up. Take it slow, look at your options and spells… and gather those up because they can help a great deal. This game, like Seven Scrolls, accomplishes exactly what it set out to do. A fun, turn-based dungeon crawler that’s easy to pick up and play for a few minutes. Awesome game that I happily recommend.

What is the App Army?

The App Army is Pocket Gamer’s lovely community of mobile game experts. As often as possible, we ask them for their thoughts on the latest games and share them with you.

To join, simply head over to either our Discord Channel or Facebook Group and request access by answering the three questions. We’ll then get you in right away.

Starfield star systems will be appropriately leveled to guide players

Castle Panic is a gateway to co-op board games, now it’s even better