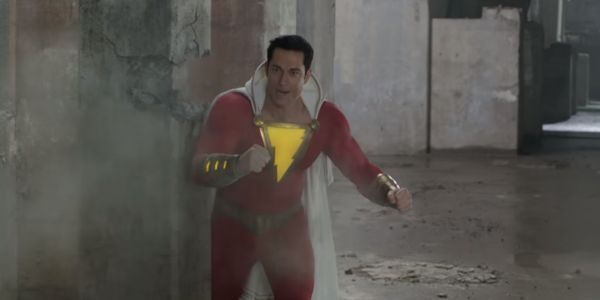 Shazam! sets itself apart from your normal superhero blockbuster by having a hero who is, basically, a 15-year-old kid. As such, Shazam/Billy Batson’s passions are largely similar to the sorts of things that average teenagers love, like eating junk food and occasionally skipping school.

One other thing that’s a big part of Shazam! is video games. We see our main characters playing against each other at one point, but that’s far from the only time that video game references are made in Shazam! Here are five surprising references to video games found in the new DC superhero movie.

As mentioned, there is one very clear video game reference in Shazam! As we see the adult superhero and his friend/brother Freddy playing the classic fighter Mortal Kombat, apparently using money they swiped from ATMs, based on all the new stuff we see surrounding them. Specifically, the two are playing the recent Mortal Kombat X and Shazam is playing as Raiden, the god of thunder. It’s a fitting choice considering both Raiden and Shazam can shoot lightning from their hands.

However, that’s not the only reference to Mortal Kombat in Shazam! Another reference comes later, when the superhero version of foster brother Eugene, uses a classic Mortal Kombat line. The game series is best known for its collection of brutal and violent finishing movies, where characters can eviscerate their opponents in various ways. It’s called the Fatality, and Eugene uses the classic phrase after Shazam has taken Silvana’s eye and defeated him for good.

Mortal Kombat is one of the best known tournament fighter games ever made, but one title that might be even more well known is the Street Fighter series. The title predates Mortal Kombat by a few years and has had several more games to its name.

Again, the reference here comes from Eugene at the end of the film. His adult superhero version has the lightning power of Zeus that he gained from Shazam. At one point, upon firing his lightning at one of the Seven Deadly Sins, he shouts “Hadouken,” a reference to the call of Street Fighter members Ryu and Ken, who use the word when sending a fireball toward an opponent.

While Street Fighter and Mortal Kombat are two game series that many people are familiar with, even if they’ve never touched a video game console, the rest of the references begin to get a bit more obscure. While those familiar with AAA console games will know the name Watch Dogs, others may not. The game is an open world action game in the vein of Grand Theft Auto but with the twist that the player has the ability to “hack” computer systems in order to manipulate the environment.

Eugene makes reference to the game as one of the reasons he has picked up some skills as a hacker. I’m not entirely clear how, since all hacking in Watch Dogs is done by pressing a single button. There really isn’t much opportunity to learn actual hacking.

Alongside Watch Dogs, however, is a reference to another hacking-themed video game, and one that might be slightly more useful to learning hacking. Uplink is another game that Eugene apparently plays, or did play, quite a bit. It’s actually sort of impressive since the game was originally released back in 2001, making the title older than Eugene is. It’s possible Eugene played the mobile version that was released in 2012. Still, it’s nice to know the kid likes to play older video games too.

Uplink doesn’t have you control an avatar of any kind, but instead is a game that looks like you’re using an actual PC interface. The “hacking” works more like the way that you see hacking portrayed in movies, as opposed to actual hacking, but since Shazam! is a movie after all, it seems likely that Uplink is a realistic version of hacking for that world.

The most utterly bizarre video game reference is the unlikeliest one in the movie to notice. Rather than being referenced in dialogue or shown clearly on screen, one scene shows one of the supporting characters armed with a Sony Sharpshooter, a gun peripheral that was designed to be used with the PlayStation 3’s Move motion control.

Back when the Nintendo Wii was the biggest thing to hit video games since, well, the original Nintendo Entertainment System, Sony tried to come up with its own version of the tech. The Sharpshooter was essentially a plastic shell for the system that turned the standard Move controller into a light gun. The thing is, the Move was never a major hit, and the Sharpshooter was an additional peripheral, making it even less popular. Where somebody found one of these, and why they thought using it was a good idea, is anybody’s guess.

This last one I’m not sure is specifically meant to be a video game reference, but it’s too close to one not to mention. During the Shazam “super power testing” montage, we see the superhero doing a little dance while he’s waiting for Freddy to get ready to film him.

The dance he’s doing is called the Floss, and, while it wasn’t created for a video game, its popularity as a dance move has become immensely more popular thanks to being an available emote option in Fortnite, the most popular game in the world right now. The dance and the game have become so popular together that they’re currently the subject of one of several lawsuits against the game.

From the obvious to the obscure, there are some really fun video game references in Shazam! With all indications being that we’re going to get a sequel to Shazam! sooner rather than later, video games will probably continue to be a touchstone of this franchise, and we can look forward to more references in the future. Shazam has made appearances in real life video games before. One has to wonder if Shazam could actually become a video game character within the DC film universe, allowing Billy Batson and Freddy to actually play as their superhero counterparts in some future movie.