Which Racing Game Is Best? 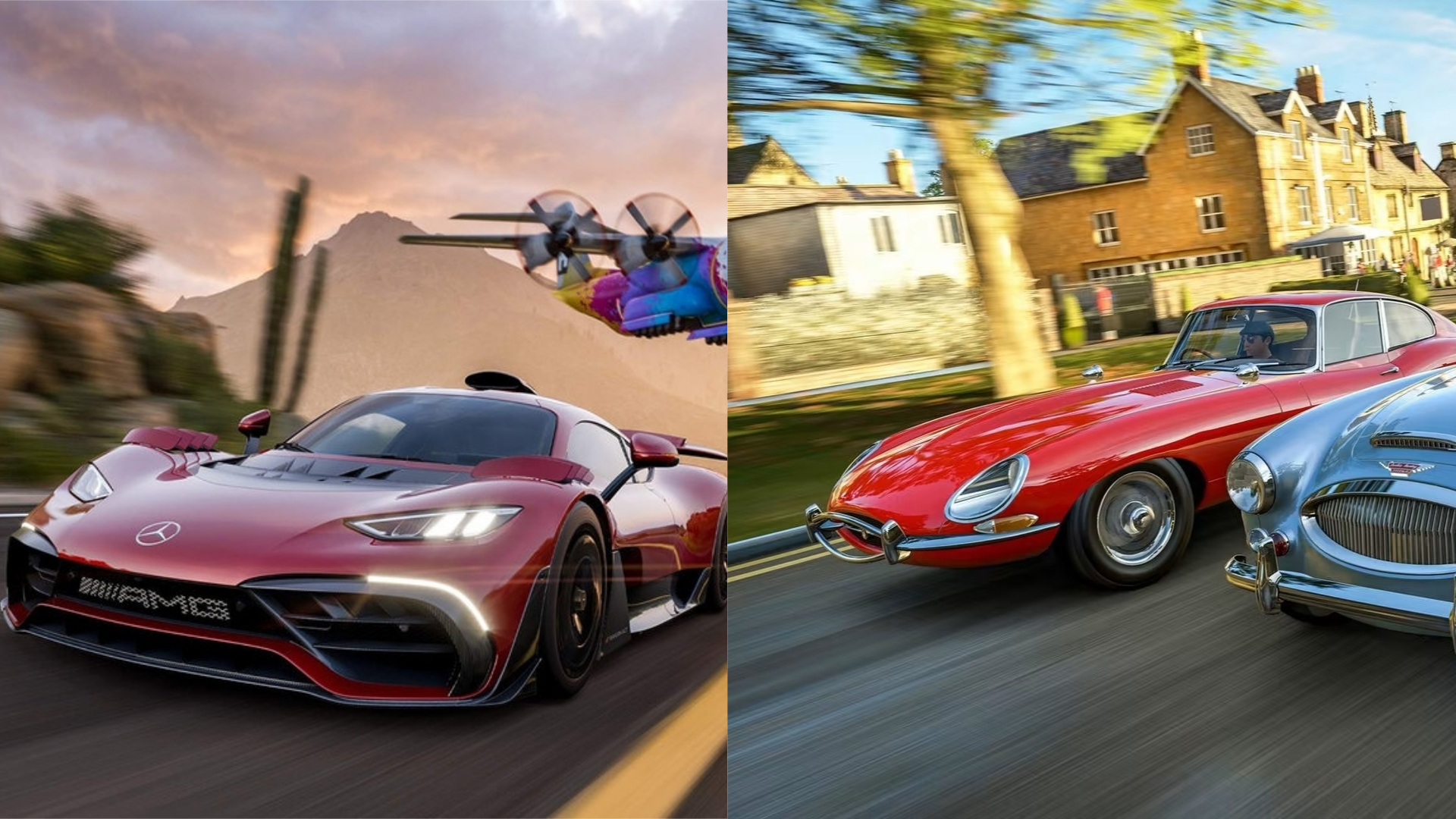 As we approach the end of the year, there’s a lot of talk around Game of the Year, and quite rightly Forza Horizon 5 is right up there in contention for the most coveted award in the game’s industry each and every year. We absolutely loved our trip out to the Horizon Festival in Forza Horizon 5, but just how does it compare with its predecessor, Forza Horizon 4? Well, we’ve looked at a number of various aspects of these open-world racing games to figure out which one reigns supreme.

Arguably the most important factor of an open-world racing game is just how good the world looks and how interesting it is to simply explore. That’s something the Forza Horizon series has been knocking out of the park for years now, but with Forza Horizon 5, it reaches its highest point yet.

In Forza Horizon 4, players had a UK-inspired map to explore. It had the stunning views of the Lake District, the claustrophobic, narrow streets of inner cities like London and Edinburgh, and plenty of fields filled with sheep and other livestock. It was also pretty leafy and picturesque, but it didn’t quite have the sense of scale. Everything felt a little bit flat for the most part.

Forza Horizon 5’s map, on the other hand, is quite easily the best in the series, let alone the best between the two most recent entries in the series. With a massive sense of scale thanks to the towering volcano, and a veritable selection of twisting roads for drifting, long straights for drag racing, and all manner of Danger Sign jumps and average speed camera zones, there’s little not to love about Mexico.

There are dense jungles where the light seeps through the thick canopy above, making the perfect place for some moody action shots. There’s the hairpin-ridden road leading its way up the side of said active volcano, offering breath-taking views of the towns and villages in the distance below. There are long stretches of beach and massive open areas off-road perfect for just messing about with friends or trying to rack up a massive skill chain. There’s even a stadium with a big ol’ soccer ball inside so you can get your Rocket League on… kinda.

This variety doesn’t come at the expense of the visuals, either. Something that’ll I’ll get into more detail on later. But for now, just know that Mexico looks as good as it feels to explore. Lighting and shadow effects are second-to-none, and the various hazardous weather effects that come with each season only add to the sense that this is a real, living world.

It’s also worth now factoring in the new Hot Wheels expansion for Forza Horizon 5, which in our opinion, is a little more entertaining and varied than the LEGO DLC for Forza Horizon 5. Both are enjoyable, but if you’re looking for high-octane thrills and a more varied, interesting area to explore, than the Hot Wheels world just about tips it for us.

I did initially toy with the idea of leaving this as a draw. After all, the gameplay is more or less the same between the two Horizon titles, but there are some much-needed improvements made in 5 that just give it the edge here.

For those unfamiliar with the series, Forza Horizon games are always based around the Horizon Festival, a roaming celebration of everything motorsport. You complete races and improve your reputation across the festival, unlocking more events as you go.

Outside of standard races, there are Danger Sign jumps for you to break the records of, average speed cameras to set off, drift zones to conquer and even hidden treasure chests to find every once in a while. There are XP boards, fast travel boards, online leaderboards, a Battle Royale-style multiplayer mode called The Eliminator, and much, much more.

My only grievance when playing Horizon 4 was that things felt like they were over all too quickly. The campaign seemingly petered out early on, leaving your self-drive to carry you through completing race after race. In Horizon 5, we’ve got a much more complete-feeling campaign, with expedition missions that require you to complete various objectives to open up new festival sites. There’s a Hall of Fame to break into and the massive endurance events make a return once again. Oh, and some of the Showcase events in Forza Horizon 5? Chef’s kiss.

There’s not a whole lot to separate the two games’ car rosters right now, especially with the potential for many more vehicles to be added into Forza Horizon 5.

Ultimately, though, Horizon 5 more or less has all of the ‘big’ iconic cars that players would likely want to use that are also in Forza Horizon 4, with some new, modern additions added in for good measure. It’ll also see its roster get bolstered significantly with future content updates and the two upcoming expansions, but for now, if you’re looking for the most extensive selection of cars, you have to give it to Forza Horizon 4.

As brilliant as Forza Horizon 4 looked, Forza Horizon 5 simply takes it to a whole other level, and the locale of Mexico only adds to this.

While Horizon 4 looked and performed well enough following a Series X|S patch last year, Horizon 5 runs at 4K resolution with HDR enabled at a buttery smooth framerate. There’s also the option to play in Performance mode, dropping down the resolution and disabling ray-tracing in Forzavista, in order to maintain a pretty locked 60fps.

It’s not just technical specs, though. Forza Horizon 5’s open-world Mexico has so many stunning sights and amazing vistas you’ll want to crank the handbrake on just to take a moment to appreciate. All 500+ vehicle models are impeccably detailed, and even the dirt and rocks that line the side of the roads and off-road paths look photorealistic.

This may have been a slightly unfair fight, but you can’t judge which racing sim is better without taking in the visuals.

Surprising absolutely nobody, the better racing game between the two most recent entries in the Forza Horizon series is the excursion to Mexico in 5.

As you’d expect from a sequel, it’s pretty much bigger and better in every way. The core gameplay experience remains largely the same between the two entries, but when it comes to the open-world and visuals, Forza Horizon 5 runs away with the lead. Mexico’s varied terrain and a massive sense of scale make for a world that’s a sheer joy to just explore. Not that Horizon 4’s wasn’t, but Mexico is bigger and better in just about every sense. We’d also say that Horizon 5’s Hot Wheels DLC is a step up from Horizon 4’s LEGO expansion.

Add on top of that the same, core gameplay with a few new additions such as Expeditions to get to each festival site, and the whole thing running at a crisp 4K HDR image at 60fps, and you’ve got quite possibly the best racing game you can buy right now.

Forza Horizon 4 might not have won this one, but it’d take a lot to knock its successor off top spot.

Which do you think is the best Forza Horizon game? Let us know down in the comments below.

Religion, Gods And The Cross In X-Men Comics Today (Spoilers)

How to Buy & Equip Accessories in MyCareer

Diablo IV will have an in-game shop, with no ‘pay-for-power options’

Embracer Group buys rights to The Lord of the Rings