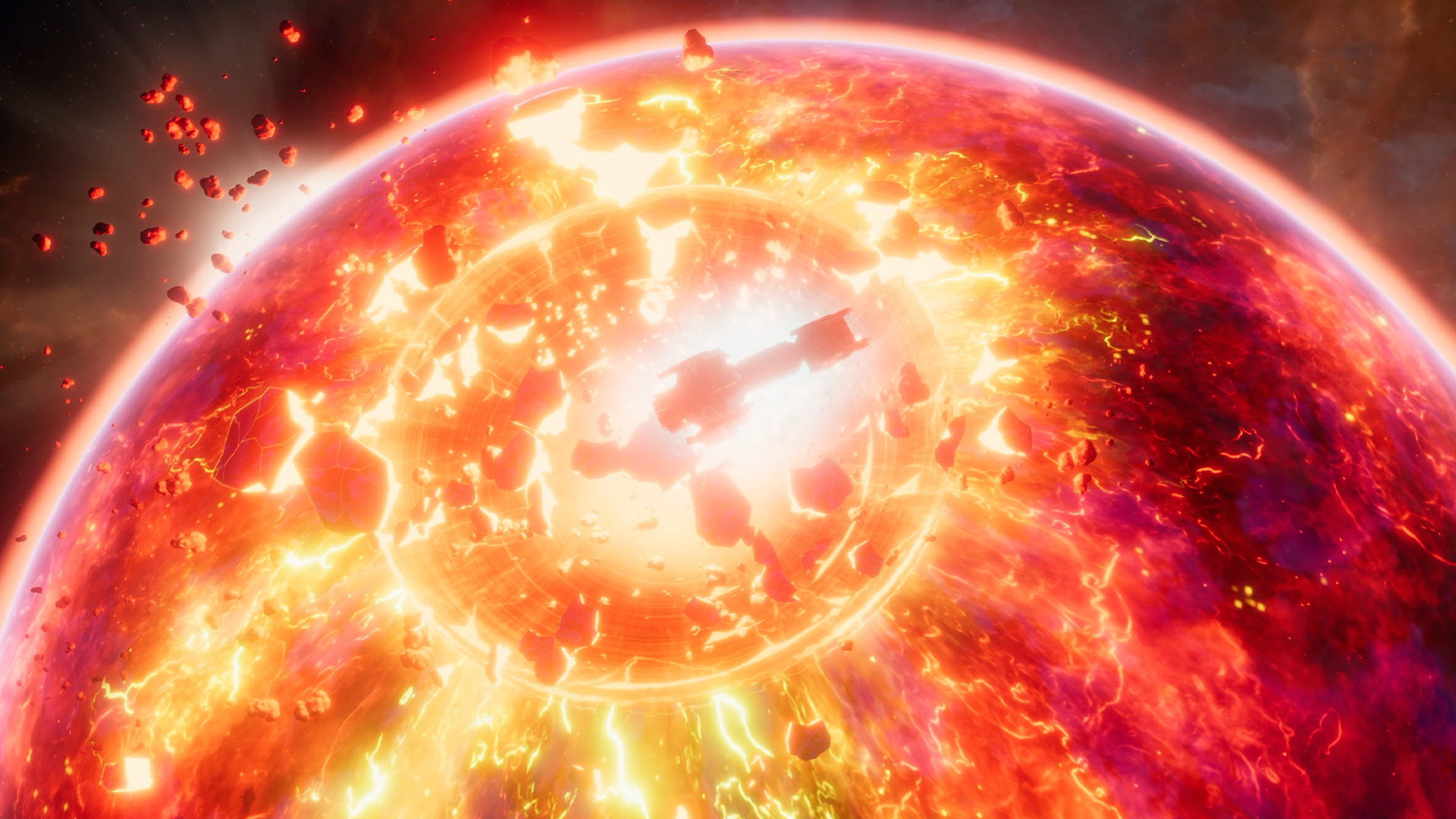 
One of the great delights of being a purely surface-level Warhammer 40K enjoyer is that around every corner there’s always some new, human-made horror to discover. The other day, for instance, I learned about the Exterminatus, a giant, Galactic Empire-inspired space gun that blows up planets when all other options – Space Marines, Grey Knights, Titans, Orbital Bombardments, et cetera – have been exhausted.


Warhammer 40,000: Chaos Gate – Daemonhunters, a new turn-based tactics game in the vein of XCOM, coming 5th May, will let you fire it, and is actually the first 40K game to feature it as a proper mechanic.


The central premise here is that a plague called the Bloom has broken out across a series of planets, thanks to Nurgle, the Chaos “Plague Lord” whose MO is being gross on a large scale. It’s your job, commanding a squad of Grey Knights – mysterious, elite Space Marines – to save as many planets as possible and ultimately stop the spread.


Creative director Noah Decter-Jackson explained that this is the “main focus” of the strategic campaign and Starmap when he elaborated to us some more:


“There are a large number of solar systems that you can travel to, and the Bloom is starting to appear in the sector and it will continue to appear, and you’ll basically get eruptions of the Bloom over time, and you’ll have to decide which of those eruptions you want to deal with based one where you physically are within the solar system, how quickly you can get there,” he said. “But really, what you’re worried about is the advance of the corruption levels on these various systems – once they get to a certain level, then they’re at grave risk of kind of pushing things over the edge, in terms of what we call the Morbus, which is this cataclysmic event.


“So at the high level side, you’re trying to manage corruption, how you manage corruption is by fighting in combat missions to try to wipe out the spread of this corruption on the planet. However, there’s a lot of ship-based management decisions that you have to make that can improve your ability to do battle at this kind of solar system-based level.”


As far as our own impressions go, our hands-on experience has been limited to the on-the-ground combat so far, but Decter-Jackson gave a couple of examples of how things play out up on the ship. One system revolves around upgrades and repairs, for instance, as you’ll start out needing to get parts of the ship fully operational after it’s taken some damage. Upgrades then affect things on the map, like how quickly you can travel to those erupting locations. There’s also ship-to-ship combat, Dexter-Jackson says – “you can encounter death guard cruisers who can sort of get in your way” – and there’s also something called the Prognosticar system.


These, he says, are kind of “psychic predictors” that can help inform you of what might happen in the future, and by upgrading them you can give yourself a “tool to battle corruption at the strategic level, by placing a Prognosticar down, that will reduce corruption within a certain Solar System area, and will also give you certain combat benefits when you fight missions within the Prognosticar’s range.” There’s also research for new combat abilities, story events, and more. The team has apparently taken some genuine inspiration from the first Warhammer 40,000: Chaos Gate game, released way back in 1998.


“We definitely played it a lot, both back in the ’90s and then just refreshing ourselves on the classic when we originally got started [on developing Daemonhunters]. What I would say is it’s definitely a spiritual successor – there are a lot of links, both on the story side there are some light links, some other details too, and on the gameplay side.” Naturally that means some things have changed quite a bit. “I think you’ll see, not an effort to replicate what was there, but to modernise, doing something that sort of creates something new but also fits what the audience for turn-based tactical games don’t really expect but demand, these days. It’s certainly not a sequel or anything in that regard, but there’s going to be a lot of familiar ground for anyone who loved Chaos Gate coming into Chaos Gate – Daemonhunter.”


Down on the ground there are similar amounts of system depth. Daemonhunters is very much an XCOM, but Space Marines game when it comes to the turn-based mechanics. There are all the usual, tactics-nerd delights like percentage-chances for ranged fire, half and full cover, lines of sight, overwatch modes and the rest. But there are some distinctly 40K twists. All of the Grey Knights in our squad had their own specialisms, for instance, with unique abilities across them.


A favourite of mine was the melee specialist who could teleport – tying up a cluster of ranged enemies who reckon themselves safe behind some high cover, and then plopping him in behind them to clean them out in a single hit is a treat. Others use psychic abilities for area-of-effect damage, servo-skulls to heal, or nicely sweeping, melodramatic attacks in long straight lines that might bring down stone columns or destroy other parts of the environment. Much of the emphasis is on “offensive, aggressive positioning,” as Decter-Jackson puts it, as well as setting up combos of abilities across your Knights – one thing you can do is use power weapons to stun enemies and allow you to select something vulnerable on their body to target, for instance, dealing out heavy damage and debuffing them in different ways, which is all played out in that wonderfully gorey, 40K way.


Most of the missions we played were pretty straightforward: clear out some pulsing clusters of flesh here and there to reduce the Bloom, survive a couple of waves, extract to safety, but they all come with that kind of intricate, methodical, positional joy of plonking your little men in exactly the right spot to clear out rooms and close off angles. And beyond that there are some proper boss battles, including a prologue with what I assumed to be the more traditional, Khorne-based Chaos and one at the end of my session that was a genuine challenge, at least after just an hour or so with the mechanics.


This was against a giant, hulking great Nurgle daemon who lumbers around a large room, supported by a series of destructible nodes around the outskirts and dozens upon dozens of Nurglings, who scamper about to heal the boss or block damage you might have dealt it. It makes for a fraught battle. I opted to teleport my melee specialist around the outskirts to quickly get rid of those nodes, for instance, thinking it’d help manage the waves most effectively, but think I might opt to keep everyone together next time, if only to make it easier to keep everyone revived. I also criminally underused my flamers, which is something I’d correct too, but all this is easier said than done when a walking, five-story zit is belching your men across the room every other turn. It was enjoyably tough.


It’s also probably a good example of when I might want to use that Exterminatus, come to think of it, although Decter-Jackson warns you’d want to be sparing. “It’s definitely a higher-resource cost choice, it’s not something you can do very easily. Normally it requires an investment of a lot of servitors, and it’s something that certain players maybe – or defensive players – might want on hand as a backup, because it does generally take time to requisition it and set it up.”


“And really, it’s kind of the card up the sleeve just in case there are certain systems that are just going over the edge on corruption, particularly if there’s a Flowering mission event that’s occured – that’s really what moves you along the Morbus track to ‘ultimate doom’.”


There are consequences of overuse, Decter-Jackson explains, “I can’t really get into the details of that too much,” but one will apparently be an earful from Andy Serkis, who’s voicing the role of your in-game boss, Grandmaster Varden Kai. “He will observe your progress and take note of where you’re succeeding and failing, and sometimes reward you for that, sometimes, you know, punish you for it.”


“He’s also interested in your opinion, in a lot of situations, and based on your actual dialogue choices will react in different ways to your opinion and choice as a commander. Initially he’s obviously on your side, but he’s dealing with a wide range of campaigns in the galaxy, so he has to be convinced that this Bloom plague that you’re dealing with is actually a real threat, and worth of a whole Grey Knights strike force. So you’re kind of also trying to justify to him why you’re here.” He will, as Decter-Jackson puts it, “definitely take exception to the overuse of Exterminatus.”


In other words, I should really get better with those Flamers.

Have we had enough of battle royale games yet?