Up Close and Personal With Ana de Armas’ Marilyn Monroe 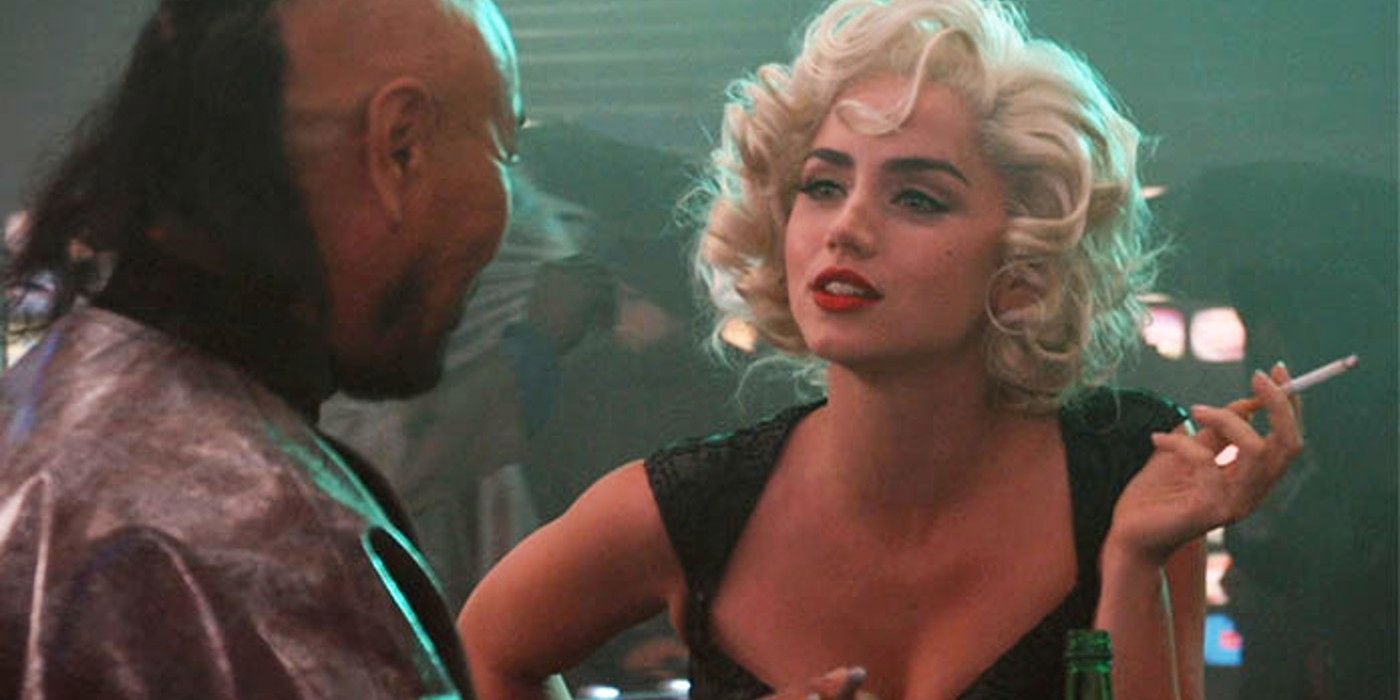 No matter how many times the story of the enigmatic Marilyn Monroe is retold, audiences will be captivated by just the suggestion of seeing her onscreen one more time. Upon the release of the full trailer for Netflix’s film Blonde, a blend of fiction and surreal elements of the Hollywood icon’s life, the official key art poster was revealed. The poster keeps it fairly simple, no flashy neons or all-star names in a marquee across the top, because, as in life, Monroe sells herself.

In the film, according to a Netflix Queue interview with Blonde‘s leading lady Ana de Armas, “every scene is inspired by an existing photograph.” Through some of Monroe’s most iconic moments, captured and pored over throughout the years, it’s fitting that the poster art be a close-up of De Armas sporting Monroe’s classic agape red lips and lidded bedroom eyes. Again, nothing sells the tragic story of a woman like the NC-17 promise of beauty and desire. From the teaser to the full trailer, audiences were treated to black-and-white reels of a deeply lost woman beaming for flashing cameras, splashed across the big screen, living the stuff that dreams are made of. The key art brings us in close, suggesting that Monroe was “watched by all, seen by none.”

De Armas details the work she put in to transform into one of the most mythic emblems in Hollywood history:

“We worked on this film for hours, every single day for almost a year. I read Joyce’s novel, studied hundreds of photographs, videos, audio recordings, films — anything I could get my hands on. Every scene is inspired by an existing photograph. We’d pore over every detail in the photo and debate what was happening in it. The first question was always, ‘What was Norma Jeane feeling here?’ We wanted to tell the human side of her story. Fame is what made Marilyn the most visible person in the world, but it also made Norma the most invisible.”

Blonde stars De Armas as the charismatic bombshell Marilyn Monroe, alongside Bobby Cannavale as The Ex-Athlete, Adrien Brody as The Playwright and Caspar Phillipson as The President. The film is based on the fictional novel of the same name by author Joyce Carol Oates. In the novel, Oates depicts three of Monroe’s great loves: Major Leaguer Joe “The Yankee Clipper” DiMaggio, the renowned playwright Arthur Miller, who penned works like Death of a Salesman and The Crucible and President John F. Kennedy, as allegorical stand-ins of themselves. As in the novel, Blonde will attempt to chronicle the duality of Marilyn and Norma Jeane through the only channels left of the glamorous anomaly. For six decades people have tried to decipher the actress’s life through her number of films, relationships, word-of-mouth accounts of her erratic behavior and the lustrous images.

Oates was inspired to write her 2000 novel, one that the author felt was her “Moby Dick,” The New Yorker says, when she first saw a photograph of a young pre-peroxide Norma Jeane Baker. The fifteen-year-old girl dreamed of seeing herself on the silver screen, but her longing to be truly loved was Marilyn Monroe’s ultimate dream. While Hollywood worked hard to keep their starlet in the tightly-fitted mold of “sex symbol,” Marilyn fought for deeper roles in films. While men sought to control her, and gain notoriety through her – or even keep her a secret – Monroe battled privately with holding on to her relationships and simultaneously retaining her independence and dignity.

Directed by Andrew Dominik, best known for his work on Killing Them Softly and The Assassination of Jesse James By the Coward Robert Ford, both starring Brad Pitt, Blonde is said to have been a passion project of the filmmaker’s for years. Originally the film was set to begin filming as far back as 2011 before Dominik announced Killing, then again in 2014. The director seems to have a penchant for biopics and the provocation of real-life stories, as his first film, 2000’s Chopper, is based on true events, as are nearly all of his other works, including his work with Netflix’s acclaimed Mindhunter series.

“The film is sincere. It’s made with love. It’s made with good intentions. But it’s full of rage at the same time. I seem to get myself in these situations where people regard me as provocative, but it’s never what I’m trying to do. I’m just trying to say it as clearly as I can. My ambition is to make you fall in love with Marilyn.”

Dominik adapted the screenplay from Oates’ novel. Joining forces, once again, Pitt’s production company Plan B will produce, with Netflix’s Okja‘s Christina Oh executive producing. Blonde will premiere on Netflix on September 23. You can watch the full trailer and see the brand-new poster art below:

Pokémon card collector says $500K worth of cards stolen from his S.C. home