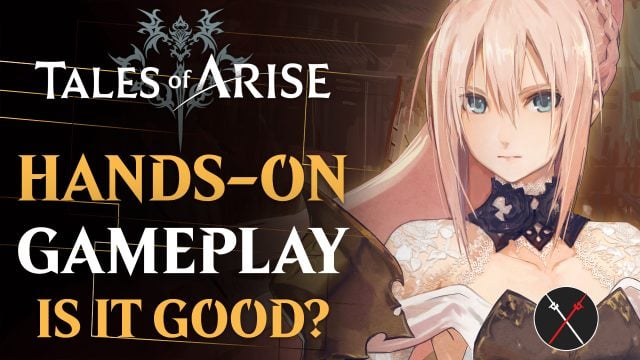 Recently, I was given the opportunity to go hands-on with Tales of Arise, the new Action-RPG that was once set for a 2020 release, but is now launching September 9th in Japan and September 10th worldwide this year. This is the 17th installment of the “Tales of” series, and Bandai Namco is aiming to set a new bar for the 25th year anniversary of the series.

This demo focuses on the 1st chapter of the game where you are introduced to the story and two main characters. Read on to find out my experience with Tales of Arise and what stood out to me the most in this demo. 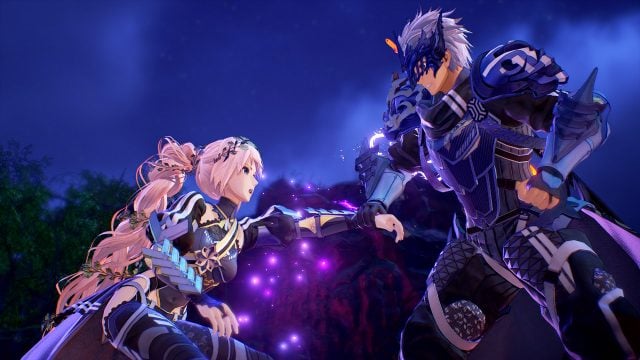 The Tales of Arise demo takes place in the Calaglia region – an arid and desert region where Balseph, the Renan Lord of the area exploits Dahnan in his quest for power. You start off as Alphen (aka the Ironed-Masked Man) and meet Shionne (from Rena) just a bit later in the game with the ability to choose who to control, both in exploration and in combat.

Eventually, you’ll be able to choose from one of six characters, exploring the fields and battling with that particular character. However, you can change your main character at any time. You have a mix of male and female characters to choose from, ranging from short-to-long range combat that includes a mage (Rinwell), an all-around fighter (Dohalim), a hammer wielder (Kisara), a gunslinger (Shionne), a sword fighter (Alphen) and a close-quarter martial artist. Alphen has 3 main sword attacks (one of them aerial) and one basic attack. 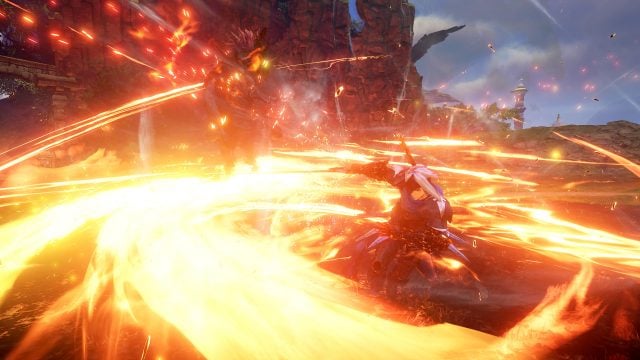 For the Difficulty settings, there are 4 different options to choose from. The easiest mode is “Story” leading all the way up to “Hard,” where you can earn the highest combat points. For my playthrough, I chose Moderate, which is just below Hard. Ultimately, if you are only playing this game for the story, then it appears that you won’t miss out on much at all by choosing a lower difficulty. However, if you’re looking for a more in-depth combat experience and story, you’ll most likely want to choose one of the upper 2 difficulty levels.

While running around the terrain, you’ll run straight into your opponent(s) or they will run right into you. From there, you’re taken to the scene of the combat, where you’ll have Shionne to help you defeat your opponents. The first were a trio of wolves, then a large rock golem, and other creatures as I proceeded to make my way through the demo. After defeating the golem, I decided to camp, which is not that different from your standard JRPG. You will certainly want to camp to restore both your HP and CP. Cooking will remind newcomers to the series of Breath of the Wild, yet each character will have their own unique specialty, giving you more variety for sure. While camping, you can even see brief skits between your party, which adds a bit more flavor. 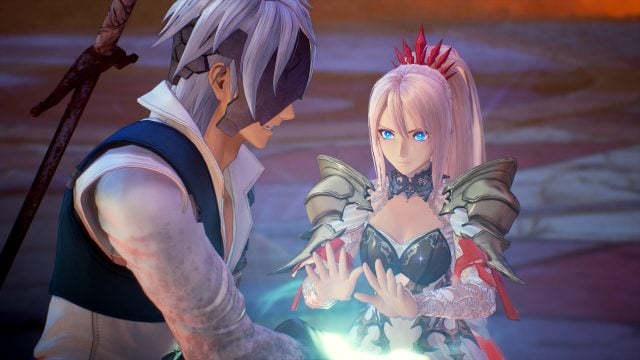 I then ran into a Praying Mantis-type enemy where Shionne says, “I don’t think we can take it right now,” which was clear to me that this large creature was a much higher level than I was. I decided to listen to Shionne and move right along. I learned my lesson more times than I can remember in RPGs when you’re trying to defeat an enemy or boss that’s 5-10 levels higher than me.

After fighting more manageable creatures (Armadillos) with Shionne, we made our way to a large gate – one of several living quarters for slaves, and we spoke with a resistance group there. Alphen speaks with the leader of the group and all are in agreement that it’s time to free the enslaved once and for all from the Renan Lords, who have ruled over Dahna for 300 years. The Lords have taken their natural resources, stripping people of their dignity and freedom with their advanced technology and magic.

I then went to an Inn where I met a Blacksmith. I crafted a Long Sword, which was very basic and to the point. This completed a quest in which you are rewarded with Gold and SP.

From there, we went to infiltrate Glanymede Castle, which is surrounded by a trench of flames, which actually looked really good. I went right into a cutscene where Shionne gives Alphen a Blazing Sword that she says can only be fully unleashed with her help. 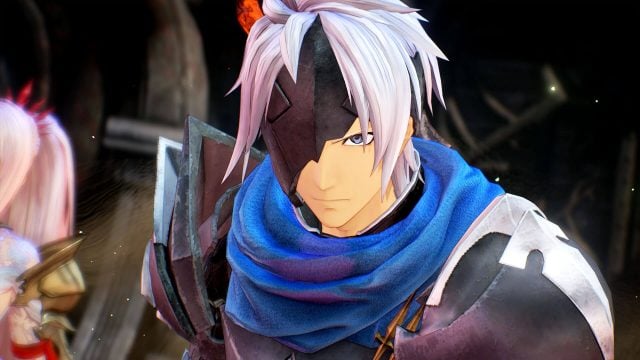 This opens up the Skill Panel, where you can unlock special attacks for your new sword. I chose the Rising Phoenix Attack, which is a charging attack that makes the sword become a phoenix incarnate and also self-inflicts when used.

You’ll have to spend SP points in order to purchase each move here. If you get low on SP, you’ll want to spend more time defeating enemies, leveling up, and completing quests. In order to figure out how to use this powerful weapon, you have to fight a Calaglia Armored Swordsman. This is basically a tutorial where you’ll have several screens pop up with some perks, boost strikes, and then you’ll have to perform them on the soldier in order to proceed.

Boost Strikes are powerful attacks using two characters that can be triggered during battles. Once an enemy is close to being defeated, you can finish them off with another paired character, dealing an animated death-blow. The death-blow will vary based on which character(s) you are paired with and the window of time to deal the Boost Strike is limited. 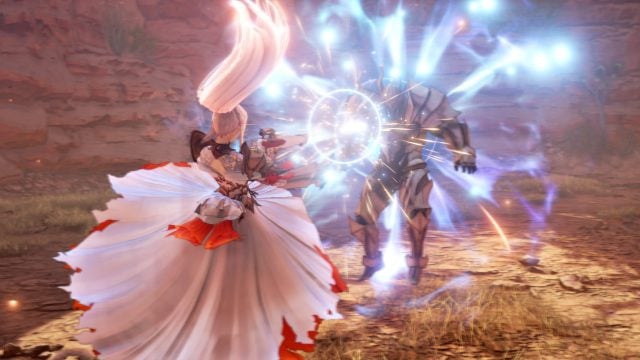 The word “Strike” will appear and you’ll even hear a “ding” so that you can know for sure when to do the strike. In more difficult battles, you’ll want to be sure to use the Boost Strike whenever possible, especially when facing a boss. There will be a variety of Strikes in the final build, so you will want to try different characters to partner with when dealing a finishing blow to your enemy. For Boss battles, you can usually do one “final blow” halfway through the fight and at the end as well.

Albeit linear, you will definitely want to explore every nook and cranny in the game, which will reward you with food, crafting items, weapons, armor and more. I found some solid armor in the castle, which was a big plus when fighting more difficult enemies. I also found a Warrior Emblem, which raises your attack. 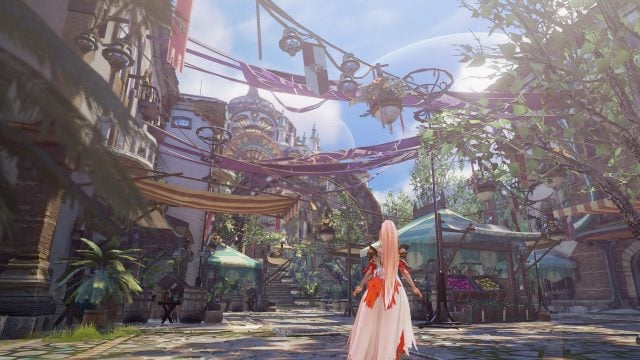 The story gets a bit grim when you find a large soldier getting ready to slay a slave-child. They are out to work in the castle as servants and the child explains that many children have tried to escape and have failed. The child then gives us the keys to an elevator that won’t budge.

As you get closer to the elevator, you face off against a level 13 boss known as, “Toxidillo.” A tutorial screen pops up that explains how to notice weak points on a boss in order to do much more damage. They show up as orange-glowing spirit cores and if you do enough damage to them, you will down the large enemy.

After you make your way to the elevator, you’ll find a Healing Light, which will restore your HP and CP. This leads to a cutscene where you have a showdown with Balseph. It’s no surprise that Lord Balseph gets away after being defeated, temporarily. You still have a long way to go in the game, but the demo gives you a great idea of what the final build will look like – the combat, story, cutscenes, fluidity, etc.

Tales of Arise has some well thought-out and fast-paced combat, and combined with the some new combat mechanics, teamwork, and excellent cutscenes in the game, I believe fans of the series will feel at home with a new-and-improved look (using Unreal Engine 4), a beautiful environment and clearly a more in-depth combat system.

In my opinion, it is unfortunate that they decided to go with a more linear approach. Sometimes, I think games need to take more chances, while giving you the feel of what made the game special in the first place, which is not always easy to do.

Here’s hoping players will keep busy and stay occupied long enough to put enough hours into Arise. Even with 60fps and 4k, I’m not sure it will feel next gen enough for new players to want to pay full price, especially on PS5 or the Xbox Series X/S. At least we’ll see Arise on Xbox One and PS4, which is always a plus considering console shortages at the moment.

The Skywalker Saga is a comfy co-op collectathon

How to Unlock Weapons in The House of the Dead: Remake – GameSpew