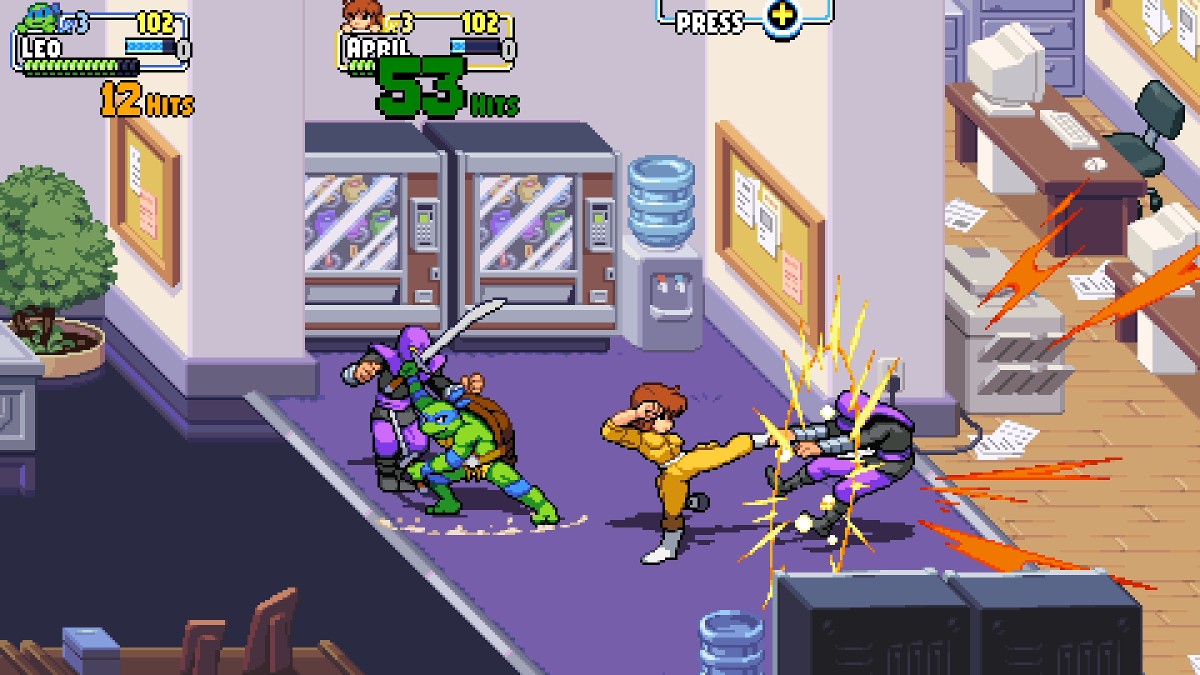 Like many 90s babies, TMNT: Turtles in Time played a huge role in the foundation of my love for gaming. Despite rarely knowing what I was doing, there were so many weekends I found myself renting the beat ’em up from Blockbuster so that my friends and I could take on the Foot clan and eat some za.

So when TMNT: Shredder’s Revenge was announced at the PlayStation Indies event back in February, it went without saying that my anticipation for the upcoming title was sky-high. While attending PAX East last week, I got to put the game to the test, experiencing all it had to offer regarding its new co-op and gameplay features.

From the get-go, I felt an instant wave of nostalgia wash over me when playing TMNT: Shredder’s Revenge. The entire ambiance brought me back to when I was a kid, as the music, combat, and pixelated art were almost identical. The game does a great job at capturing the essence of what TMNT: Turtles in Time had going for it.

Now, that isn’t to say that TMNT: Shredder’s Revenge doesn’t have some impressive visual improvements. Despite still featuring pixel art environments, the detail that’s gone into the artwork can’t be overstated.

The character and backdrop colors in the game really pop, featuring plenty of a lot of emotion that helps make the environment feel alive. Whether it’s two Foot clan members chatting while fixing a car or a group of office drones working so hard they don’t even notice the fighting in front of them, each new scene has lively energy to it.

In general, every animation that’s on display in TMNT: Shredder’s Revenge is rather precise, including combat. Every time Leo hit his special move, I couldn’t help but be impressed with the energetic blue, white, and silver hues that would flash onto the screen.

As one would expect, combat also feels a lot smoothing in TMNT: Shredder’s Revenge. Regardless of whether you’re fighting one-on-one or alongside someone in co-op, inputs feel smoother and attacks simply flow better.

One of the biggest differences in TMNT: Shredder’s Revenge’s combat comes with the game’s character variation. Unlike the original, which only let you select from the four turtles, players can now choose between Leonardo, Donatello, Michelangelo, Raphael, April O’Neil, and Master Splinter.

Depending on which character you choose, you’ll get different baseline stats and abilities. For example, Leo is a balanced character, featuring average stats in defense, attack, and special. On the other hand, April is all about power and speed, meaning she’s going to be the group’s DPS but will be more likely to fall in battle first.

And while each character has the same moveset to an extent, with basic attacks and three specials (dodge, attack, & mid-air), the animations also differ. Where Leo’s attack special is a sword tornado, April’s is a deadly mic-smash, showing that Tribute Games has put a lot of attention to detail into each character to make playing them feel unique and distinct.

Another feature that sets TMNT: Shredder’s Revenge apart from its predecessor is all the co-op elements, as the game implements tag team moves and a button that lets you share health. Most importantly, every pizza that is picked up health-wise is shared between everyone, meaning no one has to fight for scraps any longer.

This is definitely a good thing because it was clear from the two levels that I played that TMNT: Shredder’s Revenge is going to have some challenging boss fights. Even though I only died once, which didn’t matter since lives are unlimited in arcade mode, Rocksteady and Bebop each kicked me and my partner’s ass.

Thankfully, it didn’t take too long to memorize each boss’ attack patterns, meaning that TMNT: Shredder’s Revenge rewards players for taking a trial-and-error approach. By the time both levels had finished, I was already eager to play more.

The 90s Arcade Sim of Your Dreams