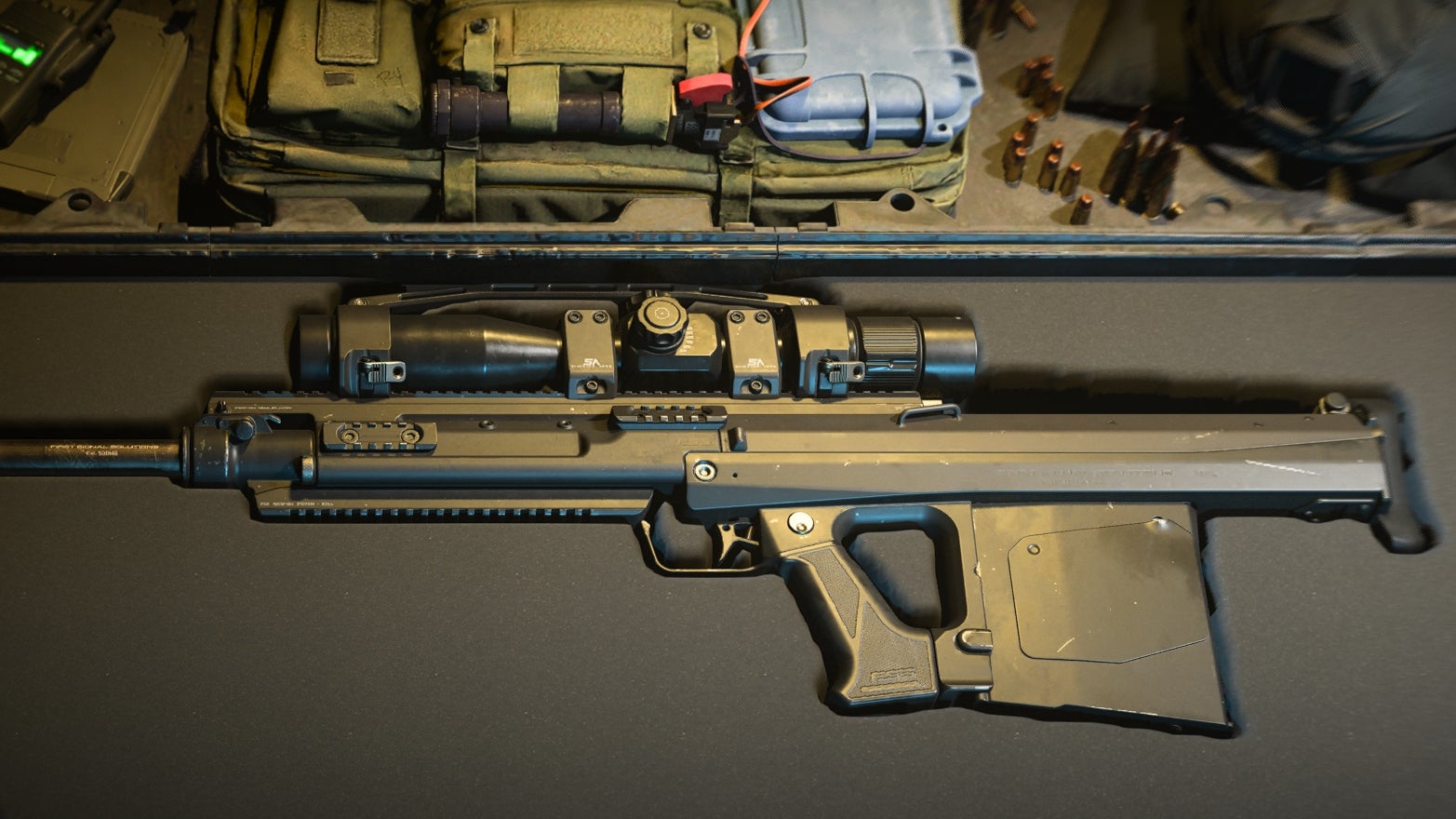 
The Signal 50 is a sniper rifle in Modern Warfare 2.


It’s a high-damage sniper rifle – the only one in the Modern Warfare 2 beta – equipped with a variable zoom scope. Though the customisation options are limited, with perks you can create a Signal 50 class to take advantage of what’s available.

As for when to use it – you’ll want to set up shop somewhere cosy, ready to watch those long range sightlines, and we recommend larger maps in modes such as ‘Invasion’, Modern Warfare 2’s new 20v20 mode.


The Signal 50 is unlocked by simply reaching level 20 in the Modern Warfare 2 beta. Play matches, complete objectives and net kills to earn XP and climb your way to 20!


From then on, you’ll be able to equip and use the Signal 50 in your own custom loadouts. That said, the level of customisation is rather limited…

How do Signal 50 attachments work in the Modern Warfare 2 beta?


In the Modern Warfare 2 beta, the Signal 50 has no attachments that can be unlocked or manually equipped, however it does come pre-built with a variable zoom scope.


If you’re looking to try the Signal 50 with attachments, it appears the only way is to select the default ‘Lone Survivor – Sentinel’ loadout during matches – here, it’s enhanced with four attachments on the sniper, including an extended magazine.


You’re still free to customise your own personal playstyle, however, thanks to a choice of perks and equipment to best accompany the Signal 50 sniper.


Since the Signal 50 is a high-powered sniper rifle, perfect for long-distance encounters, it’s very effective in modes that feature larger maps, such as Invasion.


Whether playing in core 6v6 modes or something like Invasion however, sticking to the shadows and keeping a low profile will be your best bet.


As such, we’re picking a set of perks and equipment to help keep you on the downlow whilst you pop heads from a safe distance.


Here are the recommended perks and equipment to make the best Signal 50 class setup in Modern Warfare 2’s beta:


Perk customisation has changed in Modern Warfare 2, but the fundamentals of equipping them remain the same – to start, create a custom ‘Perk Package’.


For the base perks, we recommend Overkill and Tracker.


Overkill allows you to take a second primary weapon, providing backup should you have to move location or fend off oncoming enemies.


Tracker is great for stealthy playstyles – enemies leave behind a footprint trail, whilst your kill markers are hidden from the enemy team.


For your bonus perk, there’s a few good picks – our initial shout would be Focus, reducing aim down sights (ADS) flinch and extending the hold breath-duration of your sniper.


If you want flexibility however, Resupply or Fast Hands are the better choices.


The former lets you spawn with an additional Lethal grenade – great for setting up stronger defences – and makes it so your equipment recharges after 25 seconds, providing an endless supply of lethal and tactical grenades.


Fast Hands on the other hand – no pun intended – reduces weapon swap times, rather noticeable for the Signal 50 considering its hefty weight, and a bonus with Overkill.


When it comes to your ‘Ultimate Perk’, Ghost is a great pick if stealth is your preference, since it’ll hide you from enemy UAVs, Portable Radars and Heartbeat Sensors, allowing you to keep a low profile.


Alternatively, if you’re looking to stay aware, High Alert is what you want, alerting you on screen when spotted by an enemy.


In terms of secondary, since we selected Overkill, we’ll be choosing a primary weapon – for 6v6 game modes, the Lachmann Sub is a great pick for its close-range effectiveness.


If playing ‘Invasion’ however, since the maps are expansive, you’ll want to carry something a bit more suitable as you traverse and change positions.


The M16, equipped with the Hybrid Firepoint optic that allows you to swap between a 4x scope and red dot sight (unlocked by levelling the Lachmann-762 to level 14), acts as a brilliant backup to the Signal 50.


Since our loadout’s emphasis is on finding a particular spot to snipe from, our lethal recommendation is one that’ll have your back covered.


The Claymore is a solid pick for its proximity-based detonation – it doesn’t unlock until level 27 however, so we recommend using the Proximity Mine until then.


In the Tactical slot, you’ll be wanting to bolster the stealthy aspect of the class.

Smoke Grenades are a good pick here, particularly for Invasion, creating a cloud of smoke that’ll help cover your approach.

Decoy Grenades are worth a try too – albeit niche – since they can draw enemies out by creating distracting, false radar blips, potentially opening up an elimination for you.


As for the field upgrade, you can’t go wrong with a Portable Radar at your position to keep an eye out for any incoming opponents.


However, the Tactical Insertion is handy to have – especially for larger modes – since it allows you to mark a location for where you’ll next spawn, perfect if you’ve found an effective sniper’s nest.


Without attachments, it’s difficult to fully lean into one distinct playstyle for the Signal 50 during the beta.


However, with our recommendations and whatever you may want to play around with, there’s still some flexibility, especially useful when there’s a few modes to test it out in.


Enjoy the rest of the Modern Warfare 2 beta – and if you’re after other weapons to play around with, we also recommend the M4 and FSS Hurricane.

It’s time fans stop thinking they can be game developers

Turn-Based Strategy Game ‘The Battle Of Polytopia’ Gets Switch Release…

Who Are the Traske Family in Hocus Pocus 2? Answered

What Is the Eye of Aldhani in Star Wars Andor? Explained