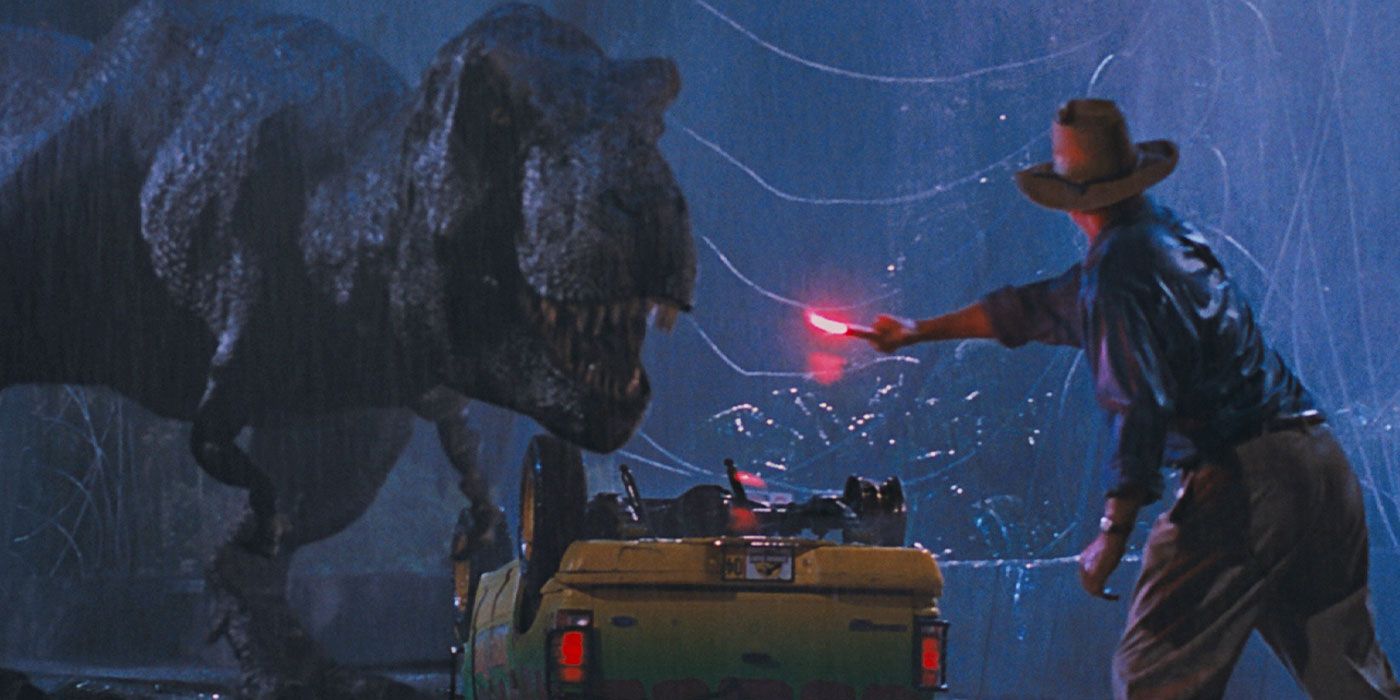 Exciting new promotional art for Jurassic World: Dominion has arrived courtesy of IMAX, who unveils an epic dino-sized poster worthy of hanging on any wall. The upcoming sequel to Jurassic World: Fallen Kingdom is set to unleash beasts of the past onto modern civilization, requiring the biggest screen possible for audiences to experience it properly.

Although Chris Pratt and Bryce Dallas Howard are not featured on the poster, another franchise mainstay makes its IMAX cover debut. Naturally, the art features the iconic T-Rex, a consistent factor in each and every Jurassic project since the original 1993 film. The dinosaur is put front and center, hoping to strike enough fear in its observer to cough up extra bucks for the premium theater format. Additionally, IMAX promises a special 20-minute Q&A with footage and commentary before one of the first screenings of the sequel on Thursday, June 9 at 7 p.m. ET.

In addition to the T-Rex, iconic characters from the original Jurassic Park trilogy are set to return in Dominion, including Sam Neill as Alan Grant, Laura Dern as Ellie Sattler, and Jeff Goldblum as Ian Malcolm, who also played a small role in Fallen Kingdom. Meanwhile, DeWanda Wise (The Harder They Fall) joins the franchise for the first time in an undisclosed role.

The newest trailer blows the lid off the highly-anticipated film, which picks up following the insane ending of the previous movie. To recap, the end of Fallen Kingdom featured dinosaurs being released in the wild, setting up an all-out survival of the fittest situation for the earth in Dominion. Set a few years after the last film, the upcoming sequel will have its lead characters travel across the globe and encounter creatures new and old. Several variations of classic dinos, including Atrociraptors, will be introduced in the globe-trotting adventure — for example, a different version of the typical raptor, the Atrociraptor, will torment Owen and co. in entirely new ways.

Colin Trevorrow returns to the director’s chair after handling the first Jurassic World and serves as a co-writer for the film with Emily Carmichael. The supporting cast includes BD Wong as Dr. Henry Wu, Justice Smith as Franklin Webb, Daniella Pineda as Dr. Zia Rodriguez, and Omar Sy as Barry Sembenè. The latest film is set to bring the Jurassic World saga to a close, although it is unclear if it stands as the definitive end for the entire franchise.

Jurassic World: Dominion stampedes into theaters on June 10, 2022, and you can check out the new IMAX poster below.

Marcos Melendez is a News Writer at Collider. He wants to make the movies he writes about, but this will do for now. If you see an article about ‘The Last of Us’, there’s a good chance this loser wrote it. You can follow him on Twitter @MarcosMelendezV.