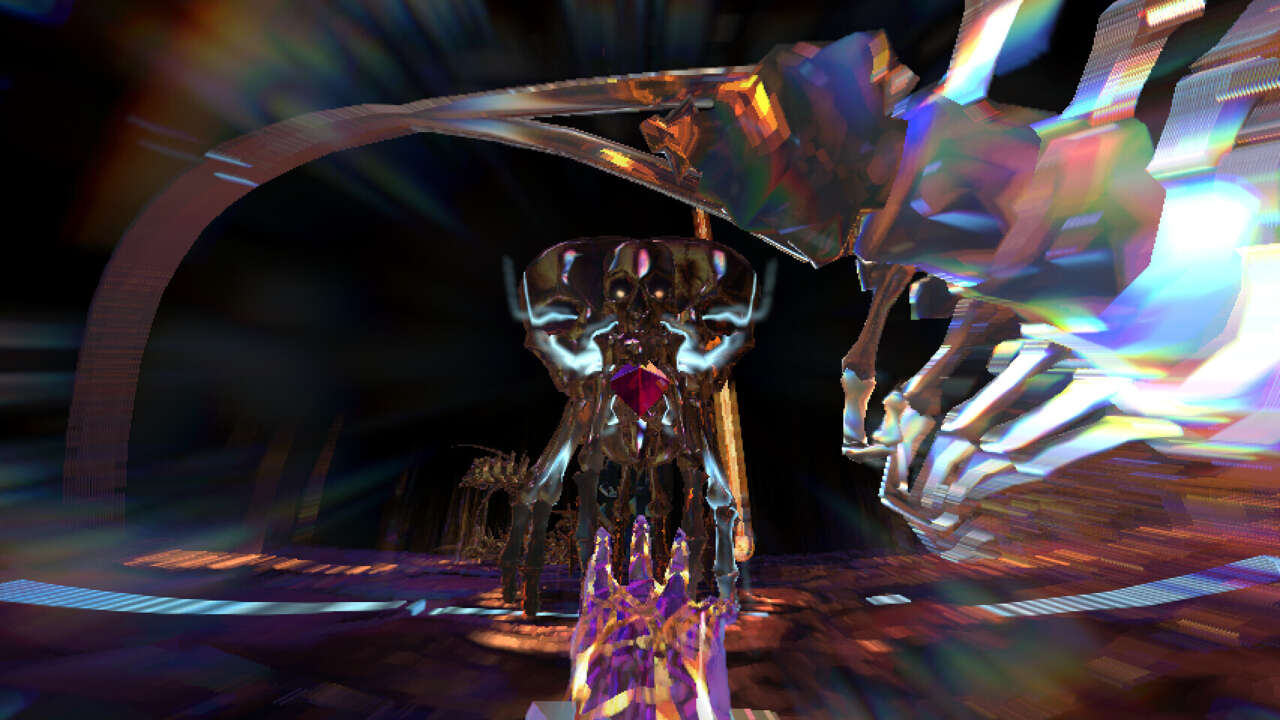 Doom might be the most renowned shooter that launched in 2016, but the year also played host to another exceptional one: Devil Daggers. With a focus on the most basic attributes of a shooter, Devil Daggers shone with its extreme difficulty and exceptionally high skill ceiling, inviting run after run for hours on end. In many ways, Hyper Demon, the next game from developer Sorath, is the logical next step of that formula. It’s every bit as grueling and engrossing, with even more mechanics to wrap your head around during its intense but short runs. It’s also far more approachable than Devil Daggers ever was, making its compelling action more inviting.

While Devil Daggers was focused solely on survival, Hyper Demon is all about aggression. Each round starts with a timer at 10 seconds, which immediately begins to tick down. Each enemy kill increases the timer by three seconds, encouraging you to string together kills in an elegant way to keep the action flowing. The game doesn’t end when the timer reaches zero; instead, your score is determined by the amount of time on the clock when you die (or manage to reach the game’s ending). Passive play, though technically a lot safer, won’t improve your standings on the leaderboard, so much so that some of your shorter, more unhinged runs might yield better scores than ones that lasted twice as long.

An expanded repertoire of mechanics, when compared to Devil Daggers, helps increase the pace of the action to match the new objective, too. Each round still plays out across limited floor space that you can easily fall off of, but you’re able to move around it much faster thanks to air dashes and chained bunny hops, the latter of which can be done indefinitely if timed right. Being able to get close to enemies to blow them away is half of the challenge, while the other is determining how best to take them out quickly. Like Devil Daggers, you can hold down the shoot button for a steady barrage of bullets or tap it for a deadlier, close-range shotgun blast. These are enhanced with a laser attack that you can fire off if you stop shooting long enough to manually absorb crystals that enemies drop on death, offering a precise, long-range option for your trouble.

All these options are easy to grasp individually, but Hyper Demon demands they be used in harmony for you to really start climbing the leaderboards. Identifying efficient paths between enemies and anticipating where new ones will spawn is as important as having high accuracy, while understanding the behavior of each enemy will help you dispatch them faster. For example, the first enemy you’ll encounter during each run is a floating well that spews out smaller skull foes while it’s alive. It’s easy enough to dispatch with regular fire from your hand, but that’s usually not fast enough to ensure it doesn’t spawn any other bothersome enemies. Instead, you can take aim at the crystal at its core with a precise laser shot (should you have one) to dispatch it immediately. The drawback in doing so is that it no longer drops that same crystal on death, which you can otherwise shatter to obtain a whole new laser charge.

Each of Hyper Demon’s enemies feature these small decisions that you’ll need to make when confronting them, which is more difficult when running around the arena while trying to both stay alive and remain aggressive. Initially it might seem strange that Hyper Demon only features four main enemy types, but it’s routinely satisfying to figure out new strings of actions that let you bounce gracefully from one kill to the next, exploiting every weakness you find to speed up the process. The faster you kill enemies, the faster new ones enter the arena, letting you identify the order in which new enemies are introduced to try and figure out an efficient route through them.

Hyper Demon’s ethereal visuals can initially be a hindrance to this. The beginning of each run is tame enough that parsing what is happening on screen is straightforward, but as each one progresses, the number of enemies and all their glowing appendages and flashing attacks become overwhelming. Couple that with the way light warps and matter bends when making last-second dodges (which come with a moment of slowdown) and it’s easy to initially lose track of what you’re looking at. But the more you engage with Hyper Demon, the more you start to realize how its visual design is a language you haven’t yet learned. Its loudness also packs in many important details that you’ll need to identify, like brief flashes of enemy eyes as they’re about to launch an attack or the ghostly red outline of another that’s out of view but about to strike from behind. Just like learning to effectively move around, you’ll quickly start understanding each new layer of Hyper Demon’s visual presentation, adapting to how ridiculous it can get the closer you get to the end of a run.

While a lot of Hyper Demon’s intricacies are revealed through time spent engaging in runs, a robust training mode does a great job of introducing you to the game’s mechanics. Each one is a small, self-contained puzzle that introduces a mechanic before tasking you to prove your understanding of it. This alleviates any confusion around how to play Hyper Demon, letting you focus instead on honing your technique from the get-go rather than poking around for an understanding as to how to pull off some of its essential tricks. Working in tandem with training is the fantastic replay system, which lets you see full runs from anyone on the leaderboard. It’s humbling to watch the world’s best time (which can often look like an entirely different game in the way that it progresses), but it’s useful to learn from other players and pick up on new strategies that you can attempt to employ on your next run. Although the sole focus of Hyper Demon is to climb higher and higher up the leaderboard, the replays almost make it feel like a collaborative effort where everyone playing is also helping you get better in the process.

With its training stages and slew of player replays to help, Hyper Demon feels a lot more approachable than Devil Daggers ever was, despite it being a far more mechanically complex shooter. It’s still one that’s going to take some time to wrap your head around, and even longer to start mastering, but that path feels far more rewarding when you’re working with the knowledge of all its systems and just honing your skill with each new run. It’s immensely satisfying to add milliseconds to your best time, enticing run after run to try and nail a new route you’ve just discovered through the game’s rich enemy types. Like Devil Daggers, Hyper Demon is an immensely satisfying distillation of shooter mechanics that is expertly balanced, and it’ll be difficult to put down once you get going.

10 Games You Should Play If You Love Pokémon Legends: Arceus