How To Upgrade Weapons And Curios 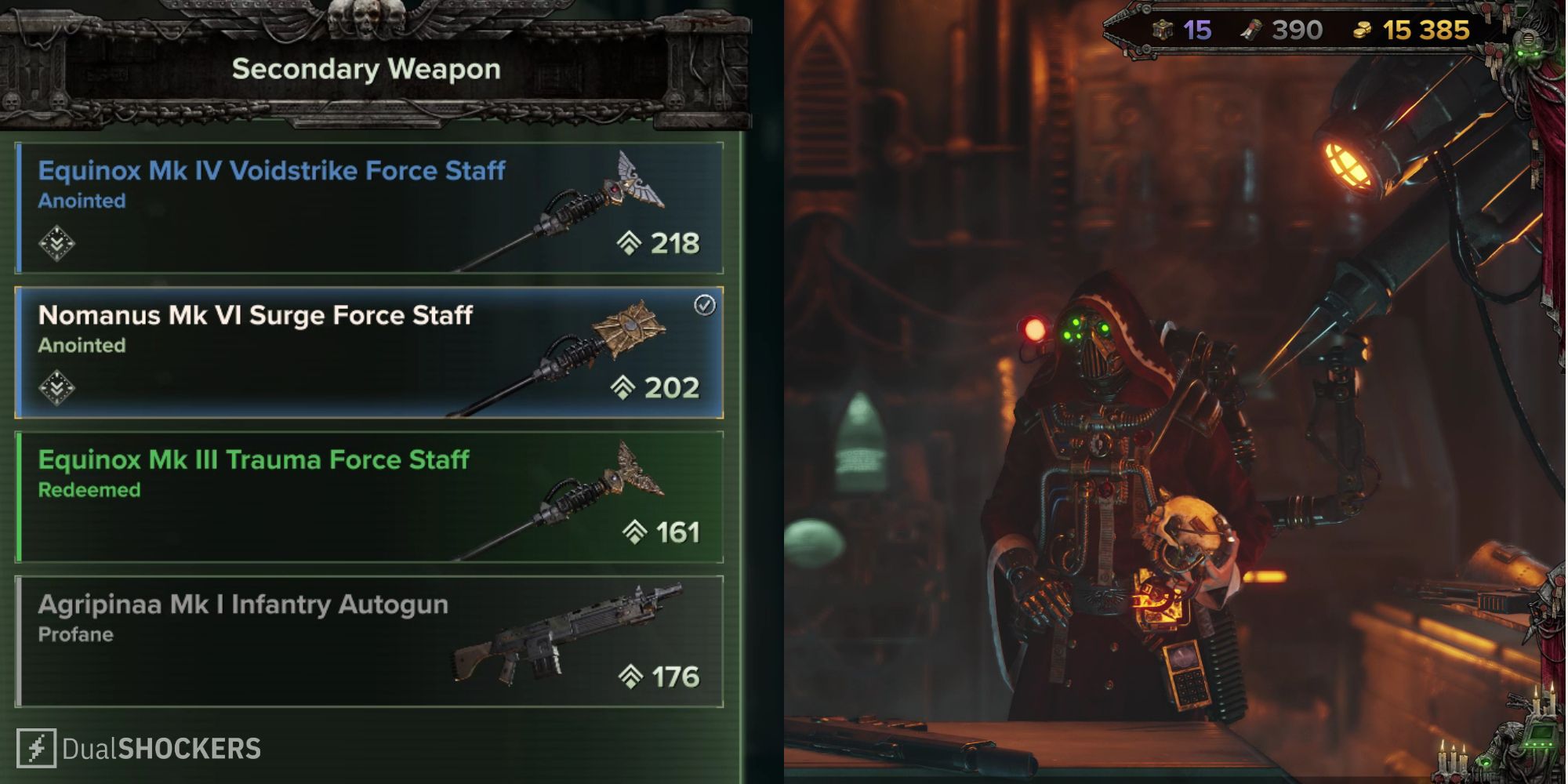 Warhammer 40K: Darktide features a wide variety of weapons to choose from, ranging from basic knives and revolvers to devastating flamethrowers and everything in between. All in all, you’re looking at 65 different types of weapons, with likely many more to come in the future via updates and DLC.

Every character starts off with two weapons regardless of class, but you can buy more from the Armoury Exchange aboard the Mourningstar. The limited selection of weapons found there rotates on a consistent basis and gets increasingly better as you level up. But even though it’s tempting to spend your hard-earned Ordo Dockets on new weapons after every mission, it’s often better to simply upgrade them instead.

Darktide’s weapons are split into five different categories based on their rarity: Profane (gray), Redeemed (green), Anointed (blue), Exalted (purple), and Transcendent (orange). The game has a very straightforward progression system that limits you to Profane and Redeemed quality weapons for the first few levels before gradually unlocking superior-quality items.

The tiered system can be a bit misleading for players new to Warhammer 40K: Darktide since it doesn’t work like in other games. A green-quality item won’t necessarily have better stats than a gray-quality item. The same goes for all the other weapon tiers. The weapon quality simply dictates the number of perks and blessings found on the weapon. Here’s a quick breakdown:

The stat that shows how good an item is in terms of raw stats is called Rating and is the big number you see on every weapon and Curio. However, keep in mind that Rating simply represents the sum of all percentage points poured into that item’s stats, perks, and blessings. Viewing an item’s stats card at a glance can be a bit confusing so make sure to Inspect it using the ‘V’ key (by default) for more detailed statistics.

How To Upgrade Weapons

You’ll gain the ability to upgrade your weapons starting at level 4. Once you hit the level requirement you’ll be introduced to the upgrade system by a cutscene followed by a prompt that directs you toward the Shrine of the Omnissiah. Speaking with the Tech Priest there will enable you to start upgrading your weapons, as well as your Curios once you unlock them a bit later on.

You’ll need Plasteel and Diamantine to upgrade your items, two resources that can be earned by completing missions. You can also sometimes find them during missions, albeit in small quantities. The amount of resources needed depends on the rarity of the item you want to upgrade. For instance, upgrading a gray item will only cost you 150 Plasteel while upgrading a green item will cost you 200 Plasteel and 50 Diamantine. Upgrading higher quality items will cost you an arm and a leg so make sure to save up your resources while leveling.

The Shrine of the Omnissiah has a few other options; some new, some borrowed from Vermintide 2. Unfortunately, the game didn’t launch with them and it’s unclear when they will be made available. Once they do get implemented, players will be able to customize items with specific perks and blessings in addition to merely upgrading them.