How To Liberate Dutch’s Island 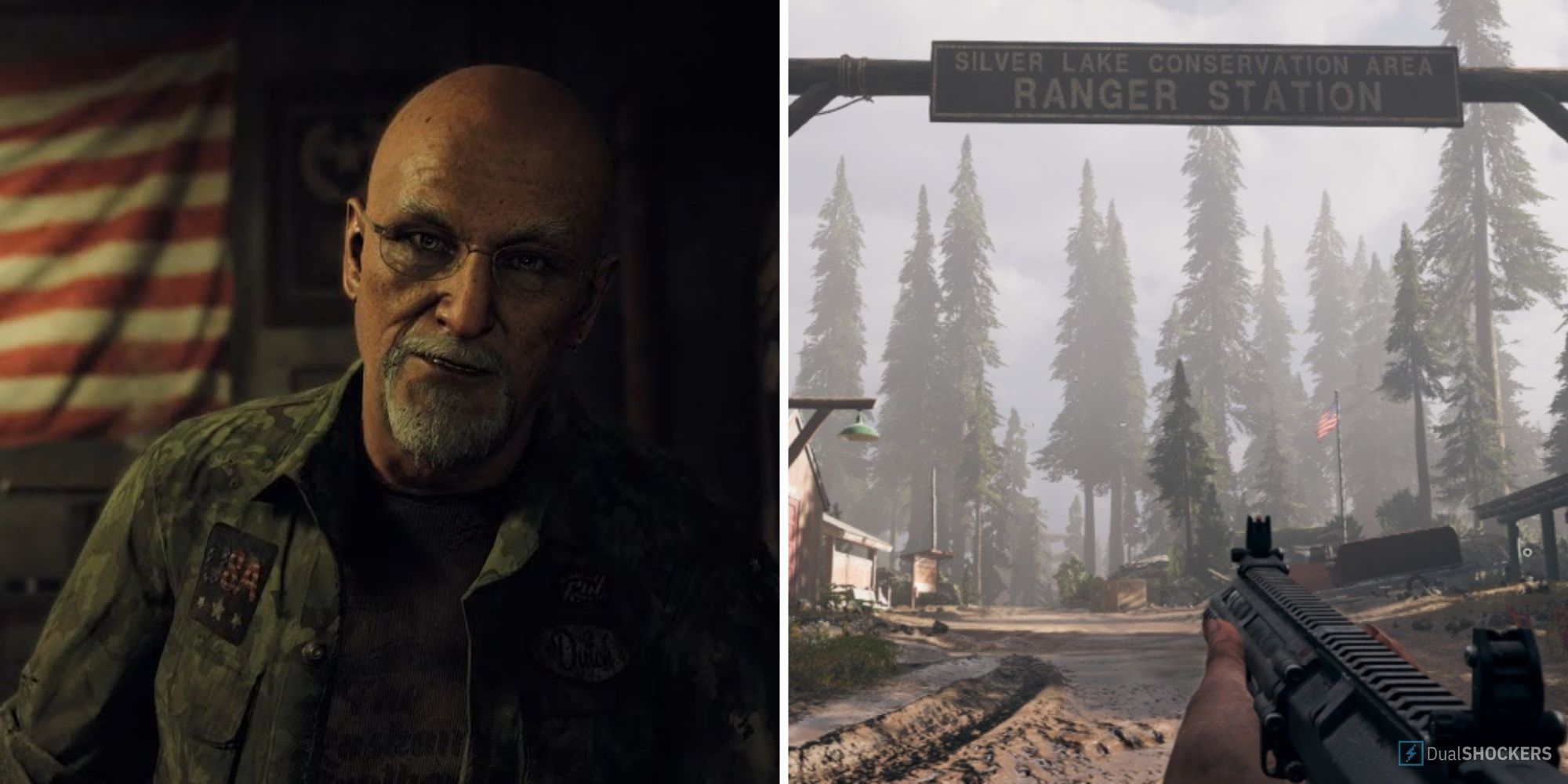 Far Cry 5 is a visually appealing first-person shooter with a rich narrative and hours and hours of gameplay suitable for any style of gamer. It opens on an attempted arrest, with you stepping in as a rookie deputy assisting Sheriff Whitehorse and Marshal Burke as they serve Eden’s Gate leader Joseph Seed with a warrant.

Chaos ensues as Joseph’s followers attack the police helicopter, leading you and Marshal Burke to escape in a truck. When the truck goes over a bridge, you find yourself in the hands of Richard “Dutch” Roosevelt, a survivalist living on an island in Hope County, Montana. He explains that he’s planning to drum up a resistance to take down the cult, but he needs your help to liberate the island first. Here’s how you can free Dutch’s island from the cult’s hold, including how to liberate captives, destroy outposts, and find stashes of loot along the way.

The Glimmer Of Hope mission begins when you awaken in Dutch’s bunker handcuffed to a bedpost. Dutch enters and explains that the cult has essentially cut off Hope County from the outside world. No one knows what’s happening there, and no help is coming.

Then, meet Dutch in his control room, where he will explain the details of his plan. On the board on the left wall, you can read details about Joseph, John, Jacob, and Faith Seed, the four siblings who control Hope County. After explaining his plan to build a resistance, Dutch will give you a gun, a map, and a key to his armory where you can stock up on ammo. Then, you can leave the bunker and head out into the world.

Throughout the island liberation, Dutch will communicate with you through radio. He’ll tell you about shrines the cult has built on the island, and where cult members are holed up. He’ll also instruct you in how to hire people you rescue and bring them over to the cause.

But first, Dutch will explain the four ways to gain resistance points. You can rescue civilians who have been taken hostage by the cult, destroy cult properties like shrines, complete missions given by Dutch over the radio, and liberate cult outposts. You will have to do all four of these things to fully liberate the island.

Once you’re out of the bunker, head south directly down the path until you reach a platform in a tree. Using your binoculars, you can spot two cult members beating up a civilian. Here’s where the platform can come in handy. Climb up the ladder for an attack from above.

Once the cult members are dealt with, liberate the civilian. He will tell you about a Prepper Stash in the boathouse, which is full of great loot. More on that in a moment.

The freed civilian will head into the Johnson Lookout Tower, located up the path to the east, where you can find ammo. Listening to the answering machine will reveal a new shrine on your map. If you head out of the lookout building and face north, you’ll be able to see the shrine. Using your binoculars, you can spot three cult members at the site.

Destroy the shrine by throwing dynamite or a Molotov at it. Or, you can simply shoot at the gas tank enough times, and it will explode.

On the dock across from the boat house, there will be a cult member beating up on a civilian. When you save this man, you can then bring him on as a hired gun for the resistance.

Dutch will chime in over the radio and tell you to head to the Forest Research Station with your new soldier. In terms of mechanics, you can now tell the hired gun to attack, follow your lead, or stay stealthy when you’re planning your ambush.

Head north to the Research Station. There are five cult members to deal with and one civilian that has been taken hostage. The next steps are up to you and your play style, whether you want stealth or a big entrance.

Inside the Research Station, free the civilian. You can find a map on the counter to the right of the window, which will mark the second shrine.

On a small island off the west coast of the main island, there’s a second shrine. This is guarded by only one cult member. Same as before, once you pick him off, either throw an explosive at the shrine or shoot the tank until it explodes.

Clearing the Silver Lake Conservation Area Ranger Station can be one of the final tasks in order to liberate Dutch’s island, depending on in which order you decide to proceed. There is one civilian and four cult members. Again, how you proceed here depends on your play style.

Inside the Ranger Station, you can find a map that will mark the Central Radio Tower. If you completed destroying both shrines, saving all three civilians, and liberating both outposts on the island, Dutch will come over the radio and tell you he can’t get in touch with anyone over the radio. He wants you to head to the radio tower and flip the switch.

Now is a good time to check out the Prepper Stash the first civilian told you about if you haven’t already. Head south from the Johnson Lookout Tower until you reach the boat house, which is a red building on the water.

First, there will be a small wooden shack with a note attached to the outside. The note explains that the bunker has flooded, and the pump has to be turned on to drain the water, but the power source is in the boat house, which is locked.

To the left of the shed is a pipe with a yellow valve on top. Interact with the valve to drain the water from the bunker. Then, interact with the two big green doors on the ground, which will reveal a set of stairs leading down into the bunker.

Inside you will find $250 on a table to the right. Directly in front of you, there is a board covering a door to another room. Use a melee weapon (shovel, pipe, baseball bat, etc.) to smash the board and reveal the room.

Inside this second room you will find:

The final part of The Resistance mission, which will give you enough resistance points to liberate the island, is to head to the Central Radio Tower (marked on your map) and flip the switch. There are no cult members to deal with at the radio tower, but you do have to climb up at least three ladders to get all the way to the top. Once there, interact with the switch to turn the tower on.

Dutch will come on the radio again and congratulate you, explaining that he’s getting all sorts of messages through the airwaves now. He will then give you three main missions: head to the Baron Lumber Mill in the Whitetail Mountains (Jacob’s territory), go to Fall’s End in Holland Valley (John’s territory), or to Hope County Jail in Henbane River (Faith’s territory). The choice is up to you to take on one of those quests, or simply begin traveling and see where Hope County takes you.

Next: Best FPS Games To Get For The PlayStation 5