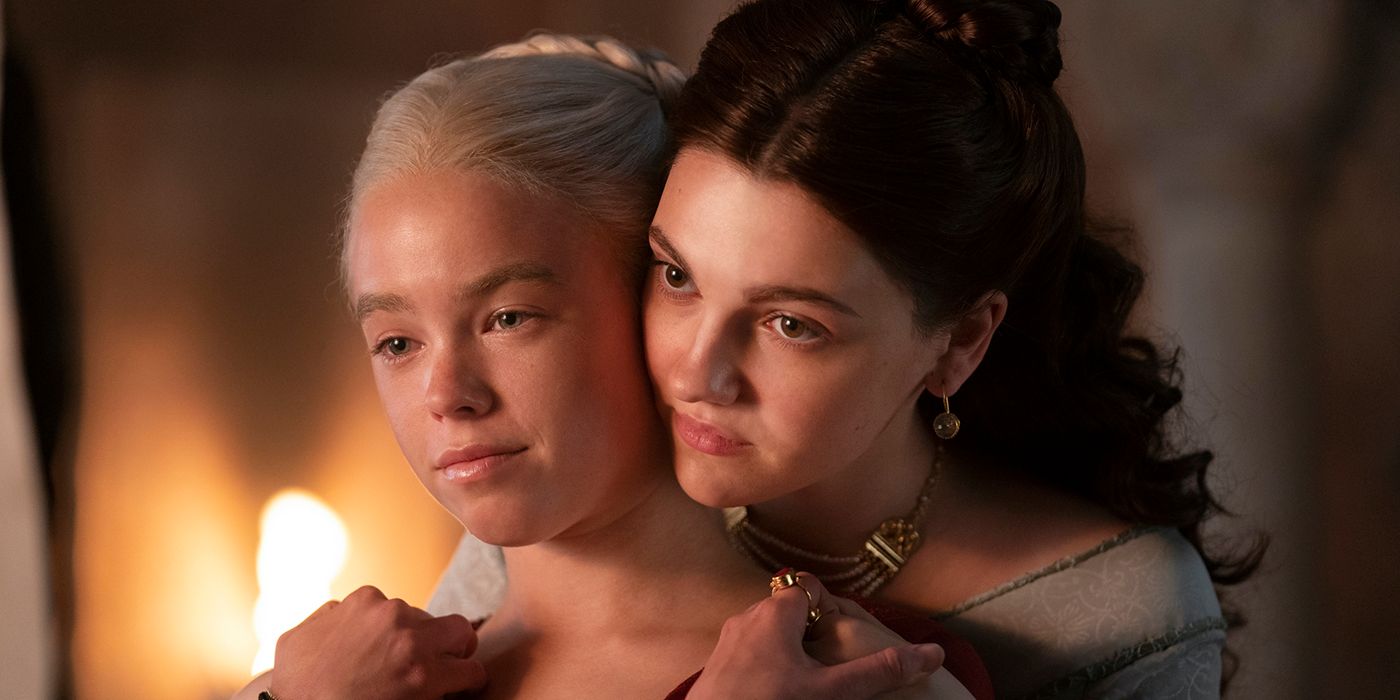 The countdown has officially begun. The Game of Thrones prequel House of the Dragon is coming soon and Empire Magazine has released yet another exclusive image. A couple of days ago we were introduced to an Iron Throne — the most desirable yet uncomfortable-looking seat in Westeros — which looked closer to the description present in George R. R. Martin’s books than the depiction present in the 8 seasons of HBO’s Game of Thrones. And now, we have been presented with a seemingly wholesome scene between childhood friends Rhaenyra Targaryen and Alicent Hightower.

At the center of House of the Dragon are two powerfully complex women: Rhaenyra (played in her younger years by Milly Alcock and later in life by Emma D’Arcy) and Alicent Hightower (Emily Carey and Olivia Cooke). In the series, which differs slightly from the books, Rhaenyra, King Viserys’s (Paddy Considine) daughter, and Alicent, daughter to the Hand of the King, are childhood friends who later in life find themselves on opposing sides of the socio-political spectrum.

According to Empire, the idea to have these two highborn women at the center of the narrative came to director and executive producer Miguel Sapochnik’s wife, Alexis Raben, who also serves as an executive at her husband’s production company. Sapochnik recounts how his wife came up with the idea: “One day, she said, ‘This would be much more interesting if it was about the two main female characters, rather than the male characters. If you really focused in on the patriarchy’s perception of women, and the fact that they’d rather destroy themselves than see a woman on the throne.’ That wasn’t a perspective I have ever told before. I think it made this show feel more contemporary too. We said, ‘What if Alicent is like “Women for Trump,” and Rhaenyra’s like punk rock?’”

RELATED: First ‘House of the Dragon’ Reactions Call It Vibrant, Epic, and a Worthy Successor to ‘Game of Thrones’

The newly released image showcases Alicent and Rhaenyra in a garden, with the latter resting her head on her friend’s lap and an open book next to her, from which Alicent is seemingly reading. It is a sweet image that illustrates the two women’s friendship, however, from what we know of the plot thus far, this peaceful scene is not to endure, and this bond is not unbreakable.

House of the Dragon premieres on August 21 on HBO and HBO Max. Check out the show’s trailer below.

Call Of Duty: Modern Warfare 2– Here Are All The Details And Rumors So Far