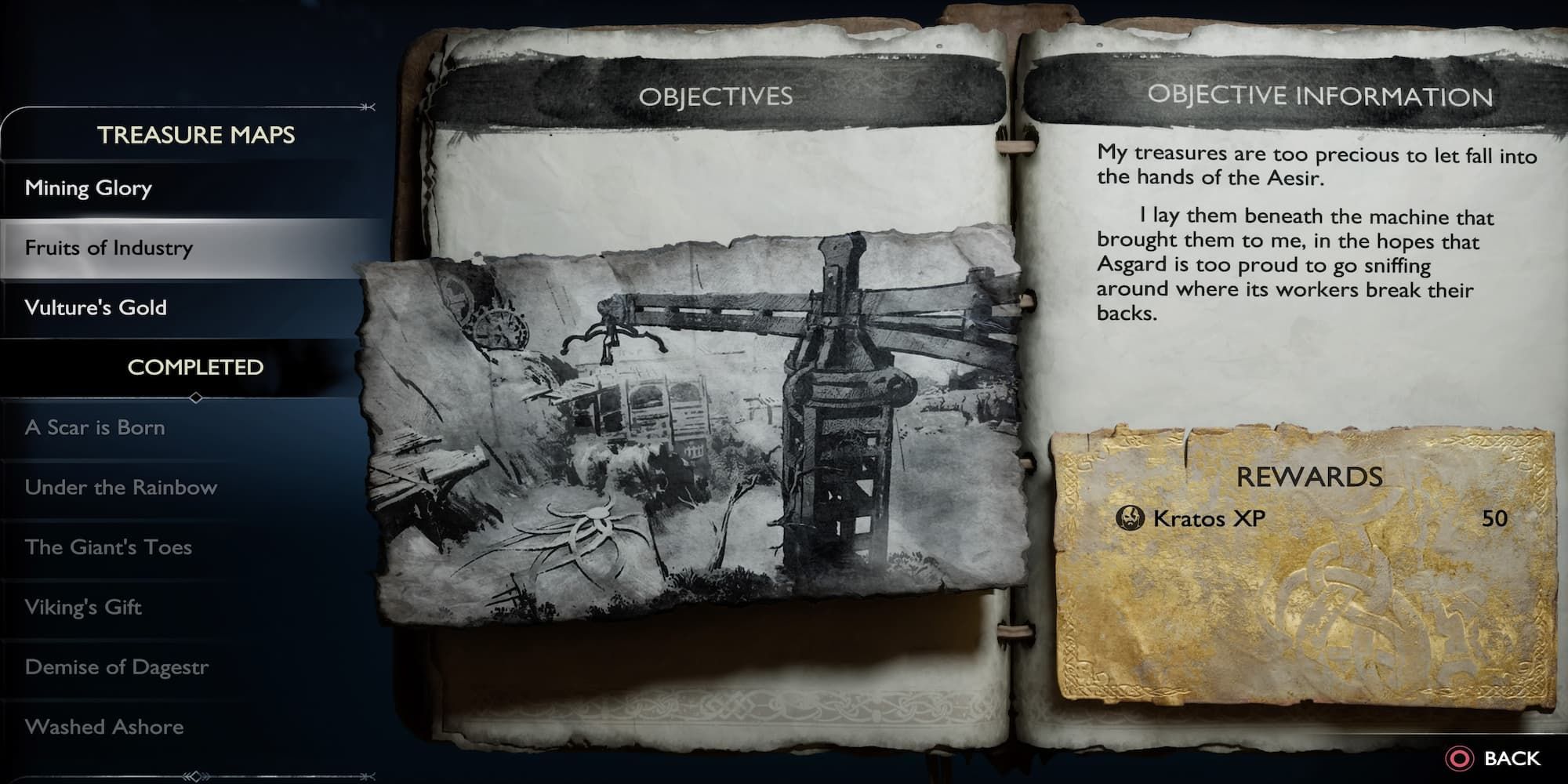 The Fruits Of Industry treasure is located within Svartalfheim. Here is how to locate its map and the reward at the end of the hunt.

Svartalfheim is one of the nine realms in Norse mythology that Kratos is able to travel to in God Of War Ragnarok. This realm was previously not seen in the 2018’s God of War but is one of the first places Kratos and Atreus travel to after their encounter with Thor and Odin in search of Tyr.

While most realms are explorable, a few sections will need to be revisited after receiving Ragnarok’s new weapon, the Draupnir spear. This is Kratos’ third weapon you’ll have access to, and it can be thrown into rocks to allow Kratos to reach previously inaccessible areas. This treasure map is one of those areas and is obtainable only after completing the “Forging Destiny” main story mission.

To locate the treasure map, you must have the Draupnir spear and head towards the Dragon Beach within Svartalfheim. From the Dragon Beach, head to the upper area using the Draupnir Spear. Make your way through Alberich Hollow, which is a straight path with only a few simple firebomb puzzles to solve. Should this be your first time through the Hollow, there will be a few enemies to encounter, with a relatively easy mini-boss at the end.

After making it through the path and defeating the mini-boss, you will find yourself on the southeastern side of the Lake Of Bounty. There will be a chest right in front of the exit, along with a gold chain to lower yourself down to the waterline below. On the right side of the cliff, you exit on will be a small wooden deck area with the map sitting on the ground.

After picking up the treasure map, the treasure will have spawned out in the world for you to find. Head down the chain to the water level and begin heading south to the other lake. In the next lake, start heading west towards Modvitnir’s Rig.

After reaching the shore, head up the ledge directly in front of where you beached the boat. In the upper area, the treasure will be closer to the ledge, and a larger enemy will be near the further wall facing away from your location. You can quietly pick up the treasure and leave without a fight if you wish.

Finding this treasure will reward players with consumable items to upgrade their gear with, along with an amulet piece of the Svartalfheim set. Players will receive 1 Petrified Bone, 1 Luminous Alloy, 1 Asgardian Ingot, 40 shattered runes, and 50 XP for Kratos. You will also receive Svartalfheim’s Lifeblood, which increases stun damage based on Kratos’ defense stat. This amulet piece also provides 3 defense and 12 vitality.