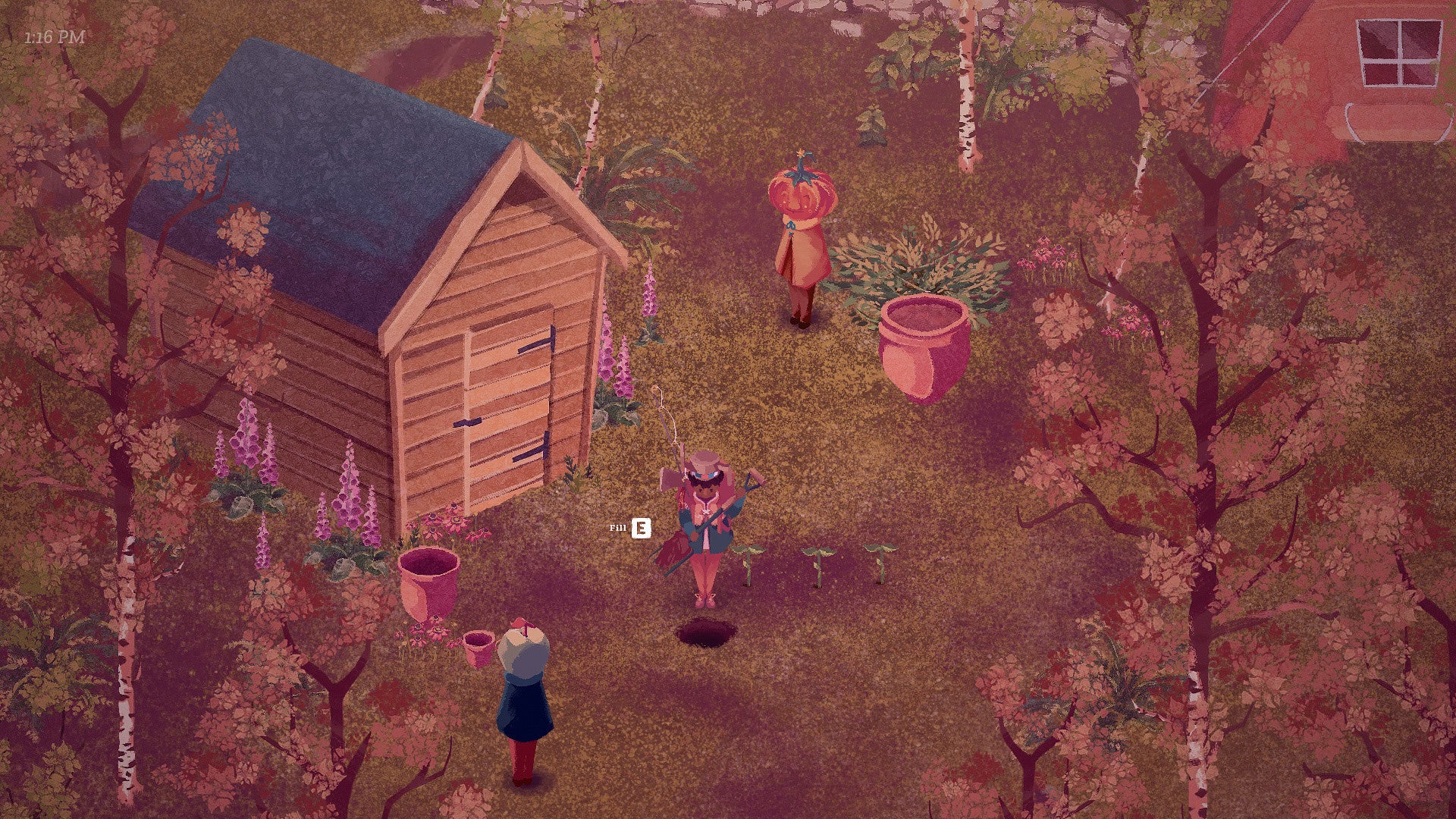 
The first and most frequent question the Garden Path makes me ask is ‘what now’. Left without direction, I’m usually quick to get lost. But lack of direction is this game’s whole point. All that’s explicitly explained after creating your own gardener is where to find your inventory and how you equip tools. Then you find yourself in the garden. The garden isn’t a small tidy pitch of land secured with a picket fence – in the Garden Path, the garden is more like a forest. It’s a large piece of land, a forest full of trees, bushes and rivers. That takes a bit of getting used to because, not to get too spiritual, if everything is the garden, what does gardening really mean?


The Garden Path wants you to roam. It doesn’t tell you what to do. I find a broken tool – looking at it in my inventory reveals there must be a person who can fix it, so I decide just to get going. I already carry an axe with me, so I fell a few trees, as you do. Some trees shed twigs, or even seeds, which I automatically pocket. This is the first of several similarities with Animal Crossing, which served as an inspiration for The Garden Path, along with Ghibli films and the Moomin books. I just take note of my spoils, with no real idea of what they might be useful for.


For a while, I simply enjoy the sound of leaves crunching under my character’s feet, the bird song and the instances of soft music tinkling like windchimes. Eventually, I meet Larto. Larto is a giant ox wearing a beanie and a…blanket? A kaftan? I love Larto and would die for him if he asked me to, simply based on his design, but what he actually wants me to do is fish. The fishing mechanic in The Garden Path is different from anything I’ve seen before – here, fish are attracted to your rod by you whistling a tune. You move a note icon along a set of rectangles until a fish appears, then you have to further wiggle the icon along a circle and reel your fishing rod in at the right time – it’s likely the most difficult fishing mechanic I’ve seen, and I know my videogame fishing. Eventually I meet Augustus, the park ranger. Of course he’s a bear. He doesn’t warn me of forest fires however, he gifts me a set of shears with which to snip a myriad of plants. The garden is full of them – encountering them often enough will teach you their names and properties, so that soon I will be able to point at a flower in real life, laugh and say to no one in particular how I’ve seen that in a videogame. Who doesn’t love that?


For a while, there’s an order and a rhythm, one that will once again feel familiar to Animal Crossing players – I meet someone new, I get a new tool, I use that tool, peacefully and at my own speed. But eventually, I hit a bit of a wall. The Garden Path runs in real time, and is designed to be played in short bursts. As such, it is natural to run out of things to do. What now? My best option is to simply wait until the next day. The writing, the soundscape, the beautiful hand-drawn watercolour art, everything wants me to be calm and take my time.


Unfortunately, when The Garden Path does give me a task, it’s really cryptic on how I could actually fulfil it. The next day, I make a new friend – Hubert, whose head is an apple, and who is just adorable. Hubert asks me to bring him spices. I have never seen a spice. Is it something I make first? How do I make it? The tasks I get in the beginning are fetch quests, which is important in a game that isn’t about constant work, but it leaves me with precious little to do if I can’t find what I’m looking for. Soon, resourceful players will likely be able to help me should I get stuck, but right now I feel a little lost.


At some point, I’m asked to set my own goal – plant some flowers, or trees, grow some herbs – the options are varied, but in a forest full of trees, planting another tree or flower feels somehow unnecessary. It would make sense if I had used the previously gathered items for something and now had to replenish the forest, but I’m just planting something because I said I would. In this case, it gets me to my next task, but it begins to dawn on me that in TGP, I need to be able to self-motivate. No one’s going to dangle something shiny in front of me to get me to work. Ironically, it may have been the constant hustle in Animal Crossing that makes it difficult for me to get used to how things work here.


Some characters come and go, and they will have different items with them. In The Garden Path, you don’t pay for items with currency, you trade, but the vendors actually don’t tell you what an item is worth to them, so you end up wildly offering them your entire inventory just to be told it’s not enough, or not quite right, without finding out what would be more to their taste.

I’m sure The Garden Path will be right at home among games like Animal Crossing and Cozy Grove when it releases for PC and Switch later this year, because the building blocks for success are all there.


Eventually, some bugs begin to crop up. The game kind, not the ladybugs I keep pocketing. I’m playing the latest version of the TGP’s Early Access, which is only available to Kickstarter backers and 100 people who could buy it on Itch.io during a special offer period (at the time of writing there are still a few copies available.) As such, bugs are part of the experience, but ones I encounter in The Garden Path make the game a bit difficult to play. The controls are generally slightly fumbly. Often I will turn my character towards something and press the action button, only for nothing to happen. If I want to cut a bramble bush too close to a water source, I might end up fishing instead. The fishing mechanic now and then doesn’t let me move the cursor. The worst is a bug that stops me from discarding items from my inventory, as an encumberment mechanic sets in as soon as it’s filled. The garden is a big place, and a reduction of my character’s already not-incredibly-high walking speed is a real punishment.


That said, I’m sure The Garden Path will be right at home among games like Animal Crossing and Cozy Grove when it releases for PC and Switch later this year, because the building blocks for success are all there. You will be able to set up a little residence area for more of your new friends, grow plants, and collect clothes just like in these games, things that everyone loves to do, and which are all buoyed by the incredible art. Made by a single developer and a small number of contributors, The Garden Path is nothing but a small wonder, complete with the promise of changing seasons and many different items you can make out of natural materials. Not having hundreds of characters will also mean I can hopefully get to know my residents much better.


I’m just too impatient for its onboarding. It’s a lot slower than any other life or farming sim I’ve played so far, and deliberately so, but there’s a fine balance between telling a player little, but enough so they can feel accomplished even after a short session, and leaving them in the dark. Right now, TGP feels a bit too close to the latter. I swear I’m ready. My pockets are full of items I can’t wait to use. What now?