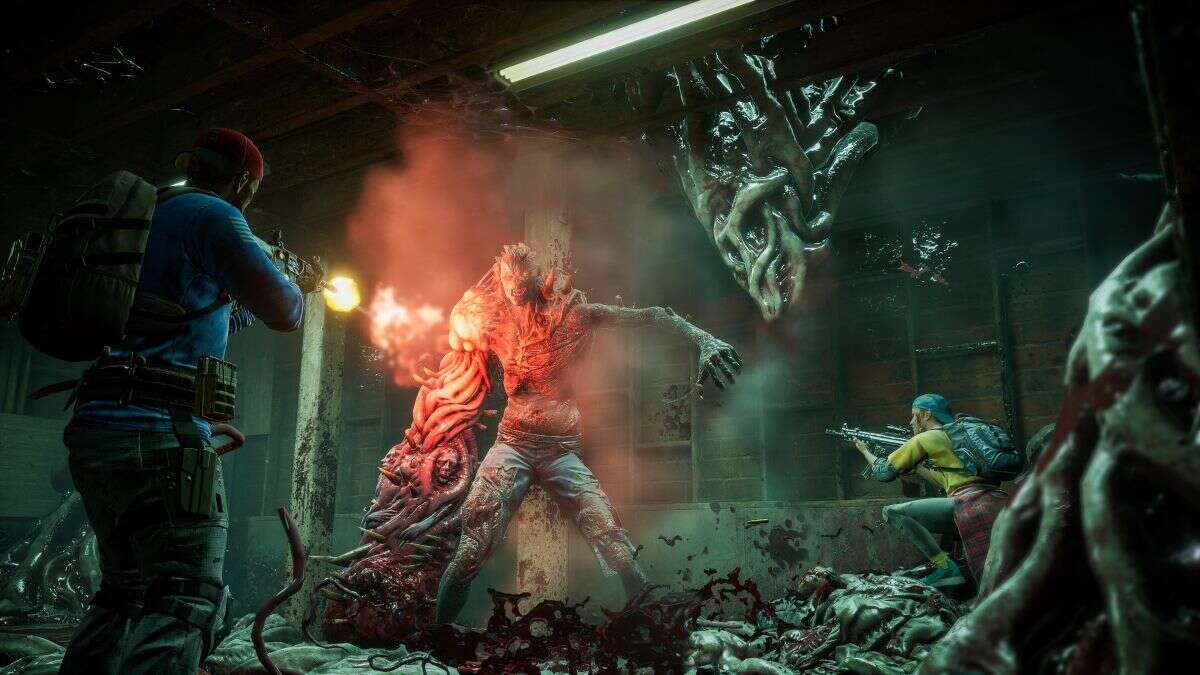 Since Back 4 Blood debuted in October 2021, it’s been players’ best-looking and perhaps most extravagant Left 4 Dead successor since the original sequel in 2009, but it’s also been a frustratingly inconsistent game to play. In one level, you may excitedly limp to the saferoom as a swarm scratches at your heels, the way any horde shooter should often feel, only for the next level to be a mess of enemy spam and poor objective design. Six months later, pacing and design issues still hinder the experience in the game’s first expansion, Tunnels of Terror, but the moments of frustration are finally showing signs of waning alongside some fun additions to the game’s core campaign.

The Tunnels of Terror expansion adds two characters, a slew of weapons, and seven new levels to Back 4 Blood in the form of Ridden Hives. Rather than offer up another underplayed side attraction to the main campaign, these Ridden Hives are smartly built right into the game’s original, already lengthy story mode. Spawning at random, hives act as high-risk, high-reward optional dungeons into which a full team must agree to descend together.

Tauntingly, they often appear near safe rooms, giving squads of Cleaners a decision to make: head for the security of the bright orange door, or sink into the hellish hives for the game’s best loot? For any high-level players, the decision should be an easy one. Legendary weapons can only be found in these hives, not to mention the game’s new free currency, Skull Totems, which can unlock exclusive new cosmetics. Those factors should mean that the toughest roguelite runs demand at least one pit stop in a hive for better weapons. However, the game’s legacy issues, like poorly balanced enemy swarms, continue to get in the way.

Across the game’s seven hives, each has a second “inner hive” region that is meant to be even harder, and they certainly are, but not in a fun way. Rather than pit you in inventive new scenarios like splitting up the group or putting you in tough flight-or-fight situations, the AI director simply throws a lot more of the game’s Mutations (special infected) at you.

It feels like a game of D&D being run by a dungeonmaster with a puerile idea of the rule of cool. Sometimes less is more, but Back 4 Blood continues to reject the notion. Opening a door and being met with four mini-bosses at once isn’t interesting, it’s just exhausting, and doing that five times in a single hive makes it that much more of a slog. As a saving grace, the AI teammates seem better now than they did at launch, meaning these overwhelming hordes are sometimes more manageable–at the very least predictable–when played offline due to the way the AI aims expertly and defends you like their monarch.

These ongoing issues are why I found it both frustrating and funny that alongside the DLC came an even harder difficulty for those who want it. I don’t know anyone who thinks the game is properly balanced at its lowest difficulty, so introducing a new ceiling without repairing that shoddy floor feels like the wrong way to go.

At least some other parts of these hives are worthwhile. The loot itself is great, offering weapons with impressive stats and special abilities in a move borrowed from loot shooters. Each bundle of these weapons is also stashed in a Warped Chest, and opening such a chest deals trauma damage to your whole squad, making HP harder to restore. Any Cleaner can unilaterally open a Warped Chest, which makes communication key–and the lack thereof potentially damning for team chemistry.

I found that so long as the AI director was only being tough but fair, the hives themselves were well worth venturing into. Each time I came upon one, my group was eager to head inside, suggesting that the risk-reward balancing act done by developer Turtle Rock is better off than its horde cadence.

While the hives do vary somewhat in design, they all largely follow the same basic principles: They’re sprawling mazes of flesh where exits must be noted mentally by any team wishing to make a quick exit after clearing them out. Getting lost is a deliberate part of the process, and teams that split up to tackle each titular tunnel will soon remember teamwork is paramount.

I wish there were more variety in the hives’ actual looks, but I do also appreciate the background lore that pours out of them. Their mere existence paints the Ridden in more vibrant colors, zapping my brain with fun questions like “how long were they down there?” and “how could these things ever be truly exterminated?” These questions don’t have answers, and I like it that way. They remind me of the purposely vague hints of how the downfall happened in any classic zombie story.

The Tunnels of Terror expansion is both a decent addition in its own right and a progress report on Back 4 Blood’s ongoing struggles to find proper balance and pace. Thanks to the accompanying patch, I witnessed fewer moments of frustration in the past week than I ever have before–monster spam in the inner hives notwithstanding–and that’s heartening as someone who would very much like to play this game for a long time, if it can just iron out some more wrinkles. For now, it’s still a bit messy, but ahead of the headlining additions of new levels, characters, and weapons, I find the most promising aspect of Tunnels of Terror is its lengthy list of patch notes.