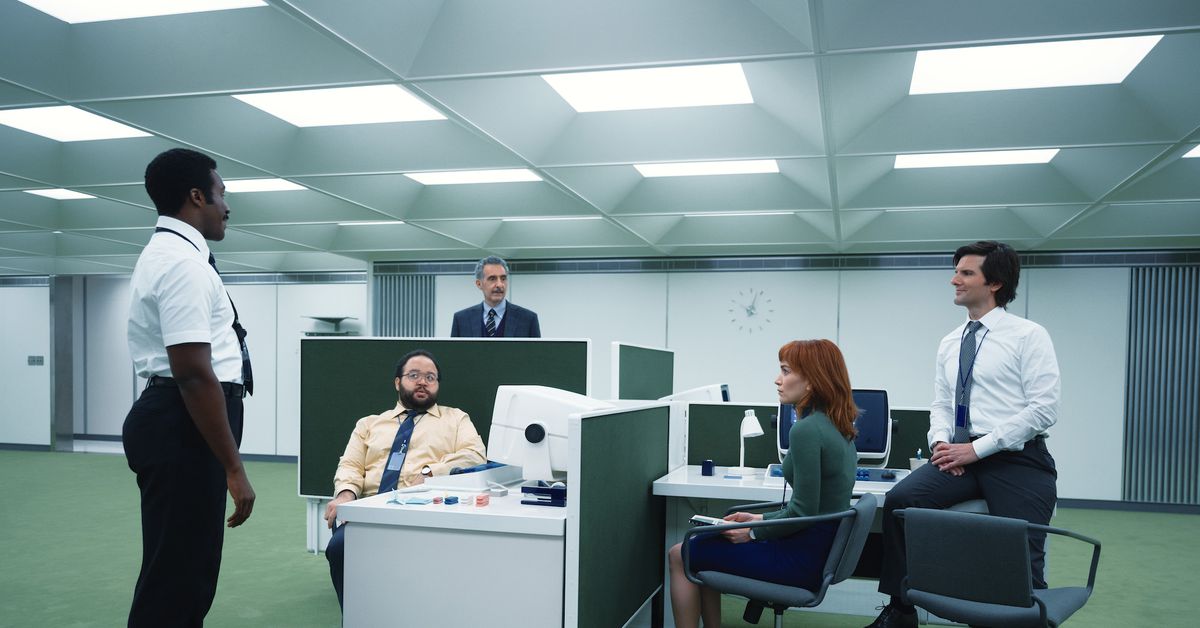 1. Take a moment to tally the things you’ve given up for a paycheck. Ever had to miss a birthday? A wedding? Ever have to leave a loved one who is grieving or sick simply because you could not afford to choose them over the job? Has it ever felt like a choice?

2. Severance, the Apple TV Plus show created by Dan Erickson, follows the workers of the Micro-Data Refinement department of the fictional Lumon Industries. No one knows what that means, including the workers, who just parse through a matrix of numerals and delete the numbers that “look scary.” Their work is top secret, and all of them have undergone a procedure known as “severance,” their minds split in two. Their work selves have no knowledge of their lives once they punch out. This means that their work personas — dubbed “innies” in common parlance — are effectively new people, who only know life inside Lumon. One workday bleeds into the next, with only an elevator ride to separate them.

3. Now consider all the times you’ve ordered a coffee at Starbucks using words you wouldn’t use otherwise. The times you’ve referred to as a work of art as “content,” or “intellectual property.” The life hacks for getting through as many podcasts or books as possible. Every time you’ve promised to “circle back” on a conversation. Who taught you to do that?

4. Mark Scout (Adam Scott) is grieving. His “outie” — the Mark that exists outside of Lumon — lost his wife, Gemma, in an accident. Severance, he explains to those who ask, is a way to deal with that loss. It’s eight hours he doesn’t have to think about Gemma, or anything at all. Some argue with him and say the practice is exploitative; pundits on TV bat the merits of the procedure back and forth. It all exhausts him. He gets what he needs out of his severance, and his life outside of Lumon is effectively empty.

5. Workplaces and their idiosyncrasies, their petty psychological warping, have always been a part of our pop cultural landscape. Art shapes culture, but work does too, and with a stronger hand. It’s natural then, for them to intersect: in workplace comedies and procedurals, where the tension between life on and off the clock provides the conflict that fuels stories. Usually, there is distressingly little space between the two. And increasingly, the characters in these stories are miserable.

6. In the world of Severance, Kier Eagan reigns supreme. The founder of Lumon, Kier is the inspiration for the employee handbook (the only literature permitted on-site), which doubles as propagandistic hagiography. His life inspires the few pieces of art on the walls, which are made in-house by a team dubbed Optics and Design. Among the recreational activities the Micro-Data Refinement (MDR) team can take is a trip to the Hall of Perpetuity, a wax museum lionizing Kier and his ancestors who shepherded Lumon through American history. Its lobby is adorned with his words: “The remembered man does not decay.” It’s a cruel joke when lorded over the people who work for his company, people who cannot remember who they are. Perhaps this is by design. Not to remind employees how they should think of their corporate masters, but how those who represent the corporation think of them.

7. They’re talking about the Great Resignation. In the fallout of a status-quo shifting pandemic, debates are unfolding in national media, where no one can seem to agree if the lesson of the last two years is that work is broken, or workers are, and in what ways. If the labor debate lacks clarity in the abstract, look a little closer and find it in the specifics, where labor unions are forming among the workers of one of the world’s biggest corporations and companies begin to abandon even the pretense of interest in worker safety as the pandemic slogs onward. The bosses of the world call this “going back to normal.” That normal, however, just seems to be one where no one asked questions.

8. The trick to Severance’s metaphor is that there really isn’t any. It’s just offering a logical explanation for the things we do to ourselves — and that are done to us — every day when we go to work. We didn’t start our lives talking to each other like that, we didn’t always look forward to menial office parties, we didn’t put our faith in tycoons and robber barons. These are learned behaviors, but if you adopt them? You’re gonna go far, kid.

9. The book of Genesis presents work as a consequence of humanity’s fallen nature. In the story of Eden, the Earth, originally created as a self-sustaining paradise, is cursed as judgment for original sin. The first humans are sentenced: by the sweat of thy brow, God tells them, shall you earn your bread. It’s a passage better known for how it ends: “For dust you are and to dust you shall return.” Thus: We’re born to work, and then die. This is a tragedy. Some appear to think otherwise.

10. In the penultimate episode of Severance’s first season, Mark and his three reports in Micro-Data Refinement — reformed corporate shill Irving (John Turturro), profane workhorse Dylan (Zach Cherry) and rebellious new hire Helly (Britt Lower) — have grown malcontent, fueled by, among other things, Dylan learning that Lumon can turn on their severed personas outside of the workplace when supervisor Seth Milchick (Tramell Tillman) interrogates him in his outie’s home. As a result, Dylan learns that he has a child outside of Lumon, and for the first time everything Lumon takes from him is made real.

11. It takes a lot to quit a job. Most do it when the job becomes impossible rather than untenable, because life under a capitalist system affords fewer opportunities to those that are less privileged, and the number of people that can count themselves as privileged is dwindling. When poverty and shelter are on the line, one doesn’t stop to consider their options. This is the hardest part about organizing a workplace — because even with a common opponent in a corporation holding tremendous power over the lives of its employees, inequity is not distributed equally. Some are expected to suffer more indignities than others, and those that are fortunate enough to be protected must be convinced to risk their employment for those that are not. No one will join the fight unless it’s made personal.

12. You can watch Severance on Apple TV Plus, the streaming service of one of the most powerful tech companies in the world, one that frequently announces new products on a stage livestreamed to thousands of adoring fans who know the company founders’ autobiography by heart. The modern corporation does not exist solely to provide a service or product, but to grow. Indefinitely and for no discernable purpose, like cancer. This streaming service is the latest expansion of a company running out of room to grow, one pivoting from just manufacturing devices to manufacturing reasons to keep users on them. Entertainment services are now like insurance companies, collecting a monthly fee in exchange for the guarantee that you’ll be able to watch something when you feel like it. Maybe you’ll do that on a box you bought from the same company, after clocking out from a job at a business owned by them as well. And it’s fine, because who has the time, the energy, to voice the nagging feeling of how wrong this is.

13. In the season finale, Dylan becomes the means by which the MDR team pulls off a thrilling heist of their outies’ lives. Hijacking the Severance control room, he uses the switchboard Milchick used on him to awaken his coworkers in the middle of their Outie’s lives. It’s an attempt to get the word out about how miserable they all are, with the added pressure of not knowing how long Dylan — who must stretch across the barricaded room to keep the switches on — will be able to keep the innies on the outside. He’s discovered eventually, and as Milchick tries to bribe him with perks as he breaks in, Dylan yells at him what he really wants: “I want to remember my fucking kid being born!” Here, Severance feels least like a satire.

14. Again, Severance isn’t really a metaphor. There’s no need for the corporate overreach it depicts, because we already submit to it every day. It’s not like we’ve had a choice.