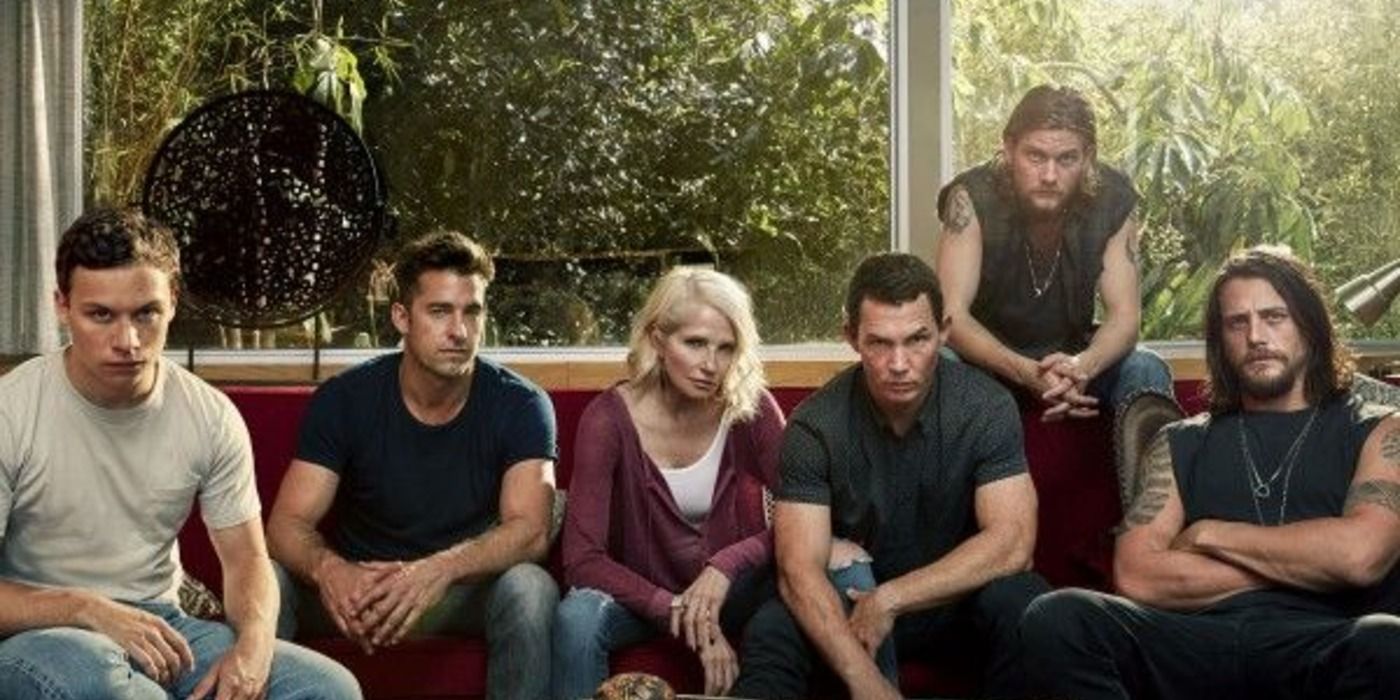 TNT has revealed a brand-new poster for the upcoming sixth and final season of their critically acclaimed crime-family drama series Animal Kingdom, showing that our “heroes” are teetering on a dangerous edge. The new poster teases a dive into hellfire as the Codys stand atop a half pipe as Shawn Hatosy’s character Pope stands on a skateboard, ready to drop in. The defining detail is that the half-pipe is on fire, scratch that, the entire area is on fire with ashes and embers from the trees rising into the Oceanside sky.

The phrase “Family ‘Til the End” sits just under the board as Pope looks down into the inferno, deciding whether or not to take the plunge. This idea of impending danger definitely makes sense with what we know about Animal Kingdom‘s final season. As previous trailers have teased, the Codys are about to embark on “one last job” in the hope that this can be their chance to “start fresh.” It’s never that easy, however, as the past is set to come back to haunt him, with a detective investigating Pope for the murder he committed back in the first season.

Animal Kingdom first premiered back in 2016 and has gone on to be an extremely popular and acclaimed series. The show was developed for television by Jonathan Lisco and was inspired by the 2010 Australian film of the same name, written and directed by David Michôd. The story of the series focuses on the Codys, a criminal family located in Oceanside, California. The series follows the family as they continue to grow their empire, facing off with both the law and those outside of it, as well as each other.

Animal Kingdom ranked as a top 10 cable drama in 2021 and is produced by John Wells Productions in association with Warner Bros. Television. The series also sees Emmy Award winner John Wells serving as executive producer alongside Daniele Nathanson, Erin Jontow, Nick Copus, and Bradley Paul. They are joined by Michôd and the producer of the original 2010 film Liz Watts, both of whom also serve as executive producers on the series. Along with Hatosy, Animal Kingdom also stars Ben Robson, Jake Weary, Finn Cole, and Leila George.

Animal Kingdom‘s sixth and final season will premiere with back-to-back episodes starting on June 19 at 9 p.m. ET/PT on TNT. Check out the new poster here:

You can read The official synopsis for the final season down below:

In the final season of TNT’s adrenaline-fueled family crime drama, the Cody boys discover that they can’t outrun their past. With their empire expanding, a cold case investigation sets off a series of events that puts the entire family in jeopardy. Revenge, betrayal, and a reckoning with long forgotten violence leads to an explosive conclusion six seasons in the making.