10 tips for fast Newbucks and growth 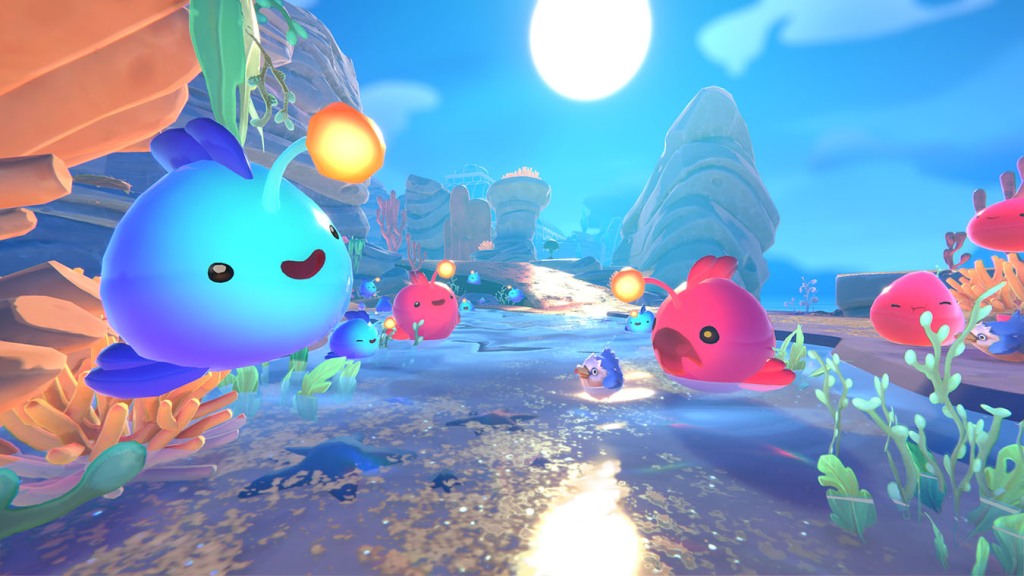 It’s time to get back into the mysterious, slimy world for Slime Rancher 2. Whether you played the first game or not, you’re in for a relaxing experience hearing blobs of unknown substance for a living – at least, it will be relaxing until they start getting hungry. Like with any farming game, there are loads of different ways you can optimise your profits, but trying to do them all at once can be overwhelming.

We’ll give you some tips for getting the most out of your slimes in the early game, what slimes you should be focusing on, what upgrades you should prioritise, and how to set yourself up for rapid expansion later on.

For many, farming games like Slime Rancher should be relaxing experiences that don’t challenge you too much, while others like the overwhelming amount of optimisation on offer. If the default difficulty settings look a bit much for you, then there are a handful of options at your disposal to make life a little easier. You can turn off tar or feral slimes so you never have to worry about your whole farm becoming corrupted, or you can adjust how much damage you take to keep the game’s combat nice and simple.

Explore at all hours 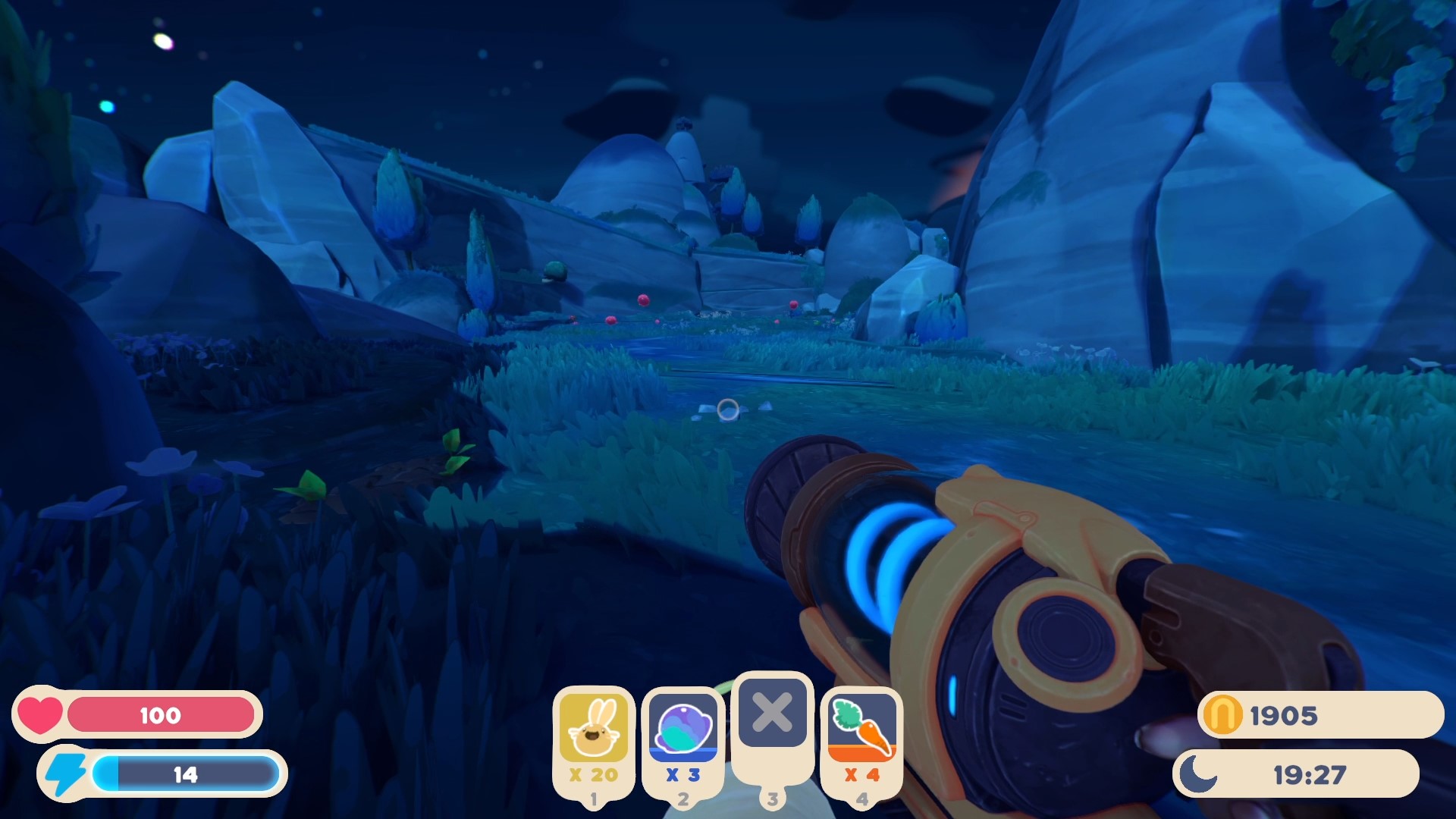 Exploring the world is the most important part of Slime Rancher. Not only is it where you’ll find the game’s story, but it’s how you’ll find new slimes, food, and resources for your farm. You should be going out regularly to gather stuff, especially as many wild slimes will generate plorts without your intervention.

However, make sure you explore areas both during the day and the night. There are plenty of slimes out there that don’t like daylight, so you’ll completely miss them unless you go out when the moon is high in the sky. This can sometimes be dangerous, as tar slimes are more likely to explore, but the money you’ll make from these night-only slimes is worth the trouble. 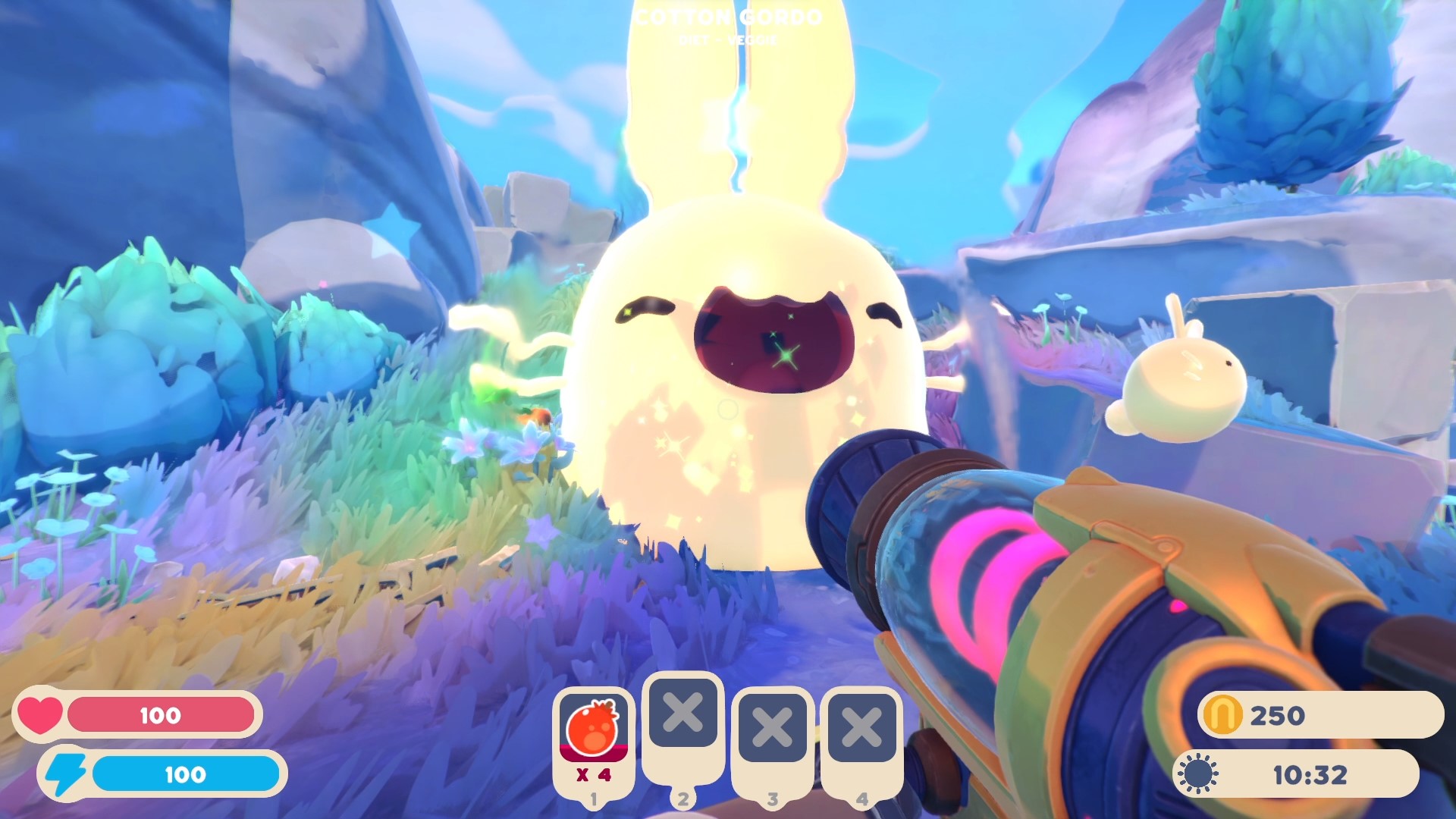 If you explore the starting island thoroughly you’ll quickly come across a few giant slimes that sit there, unmoving. These Gordo slimes will only move if you feed them a lot; and by “move” we mean, explode into lots of regular slimes. These big blobs are usually blocking some sort of secret path that will help you progress, but even if not, the sheer number of slimes you get from popping them makes them useful. 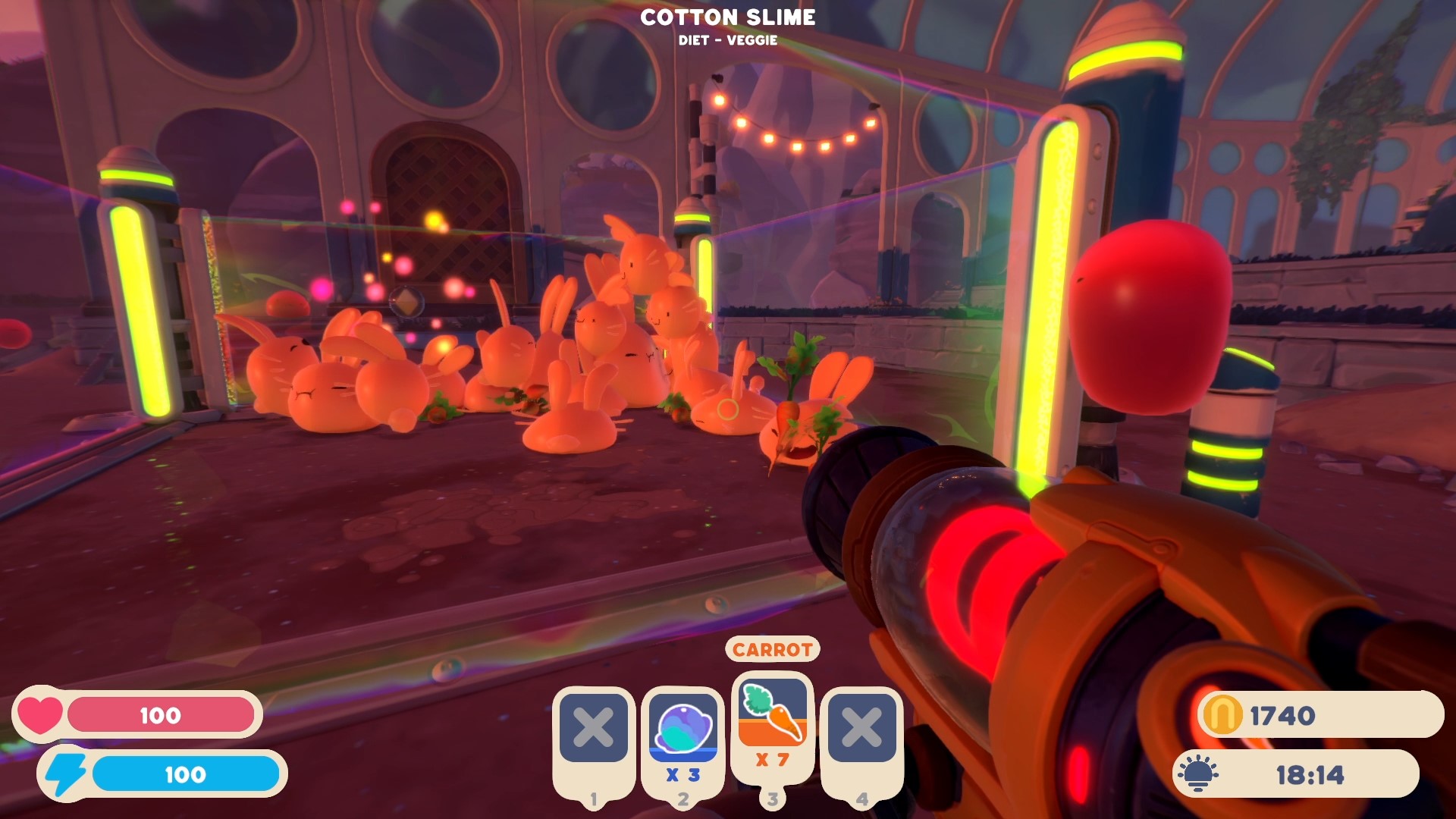 Making your slimes stay where you put them is one of the hardest parts of this game. While upgrading your corals to keep them contained is helpful, the easiest way to control your slimes is to make sure they don’t want to escape in the first place. When your slimes are hungry, they’ll become agitated which makes them more likely to bound high into the sky and right out of their coral. Feeding them regularly will keep them calm, but you can also instal and music player in their coral so they stay happier for longer. 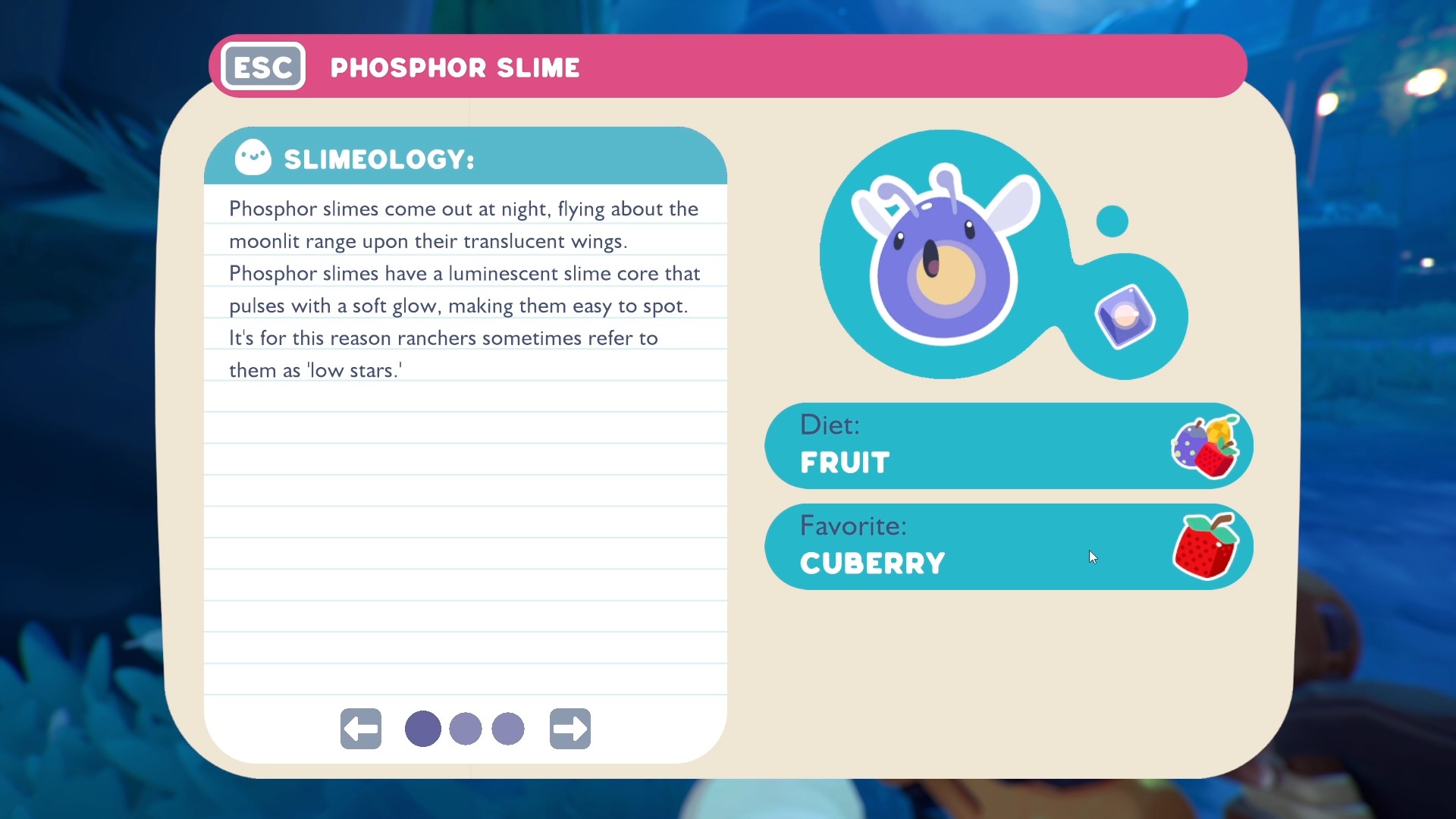 Different types of slime will only eat certain types of food, but they also have one specific item which is their favourite food. When you feed it to them, they’ll produce double the amount of plorts as normal, effectively doubling your profits. While copious amounts of food can be hard to come by early on, try to feed every slime their favourite thing as often as you can. 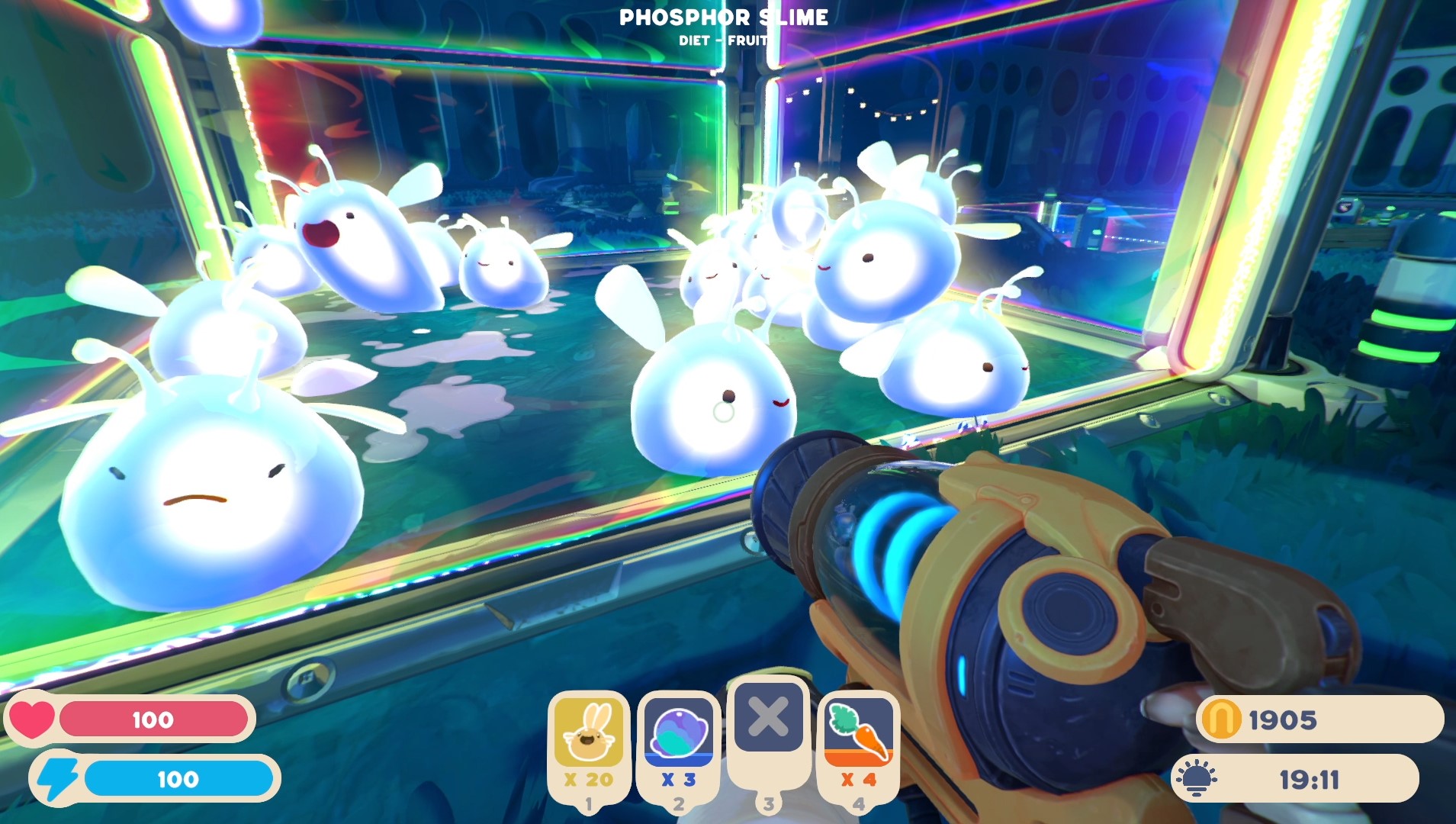 Pink and Cotton slimes are likely the first couple of slime types you’ll come across. They’re nice and easy to care for and help you build up a little cash, but they’re not where the real money is made. The easiest early-game money is in Phosphorous slimes, which only spawn at night. Their habitat takes a little bit of setup, but the profit is worth it.

You’ll need to use your Pink and Cotton slimes to build up enough money for a double-high coral with an air net and, most importantly, solar shields, as Phosphorous slimes and their plorts will die if they’re left out in the sunlight. Alternatively, you can buy the cave expansion to your farm, but that’s very expensive when you’re just starting out. 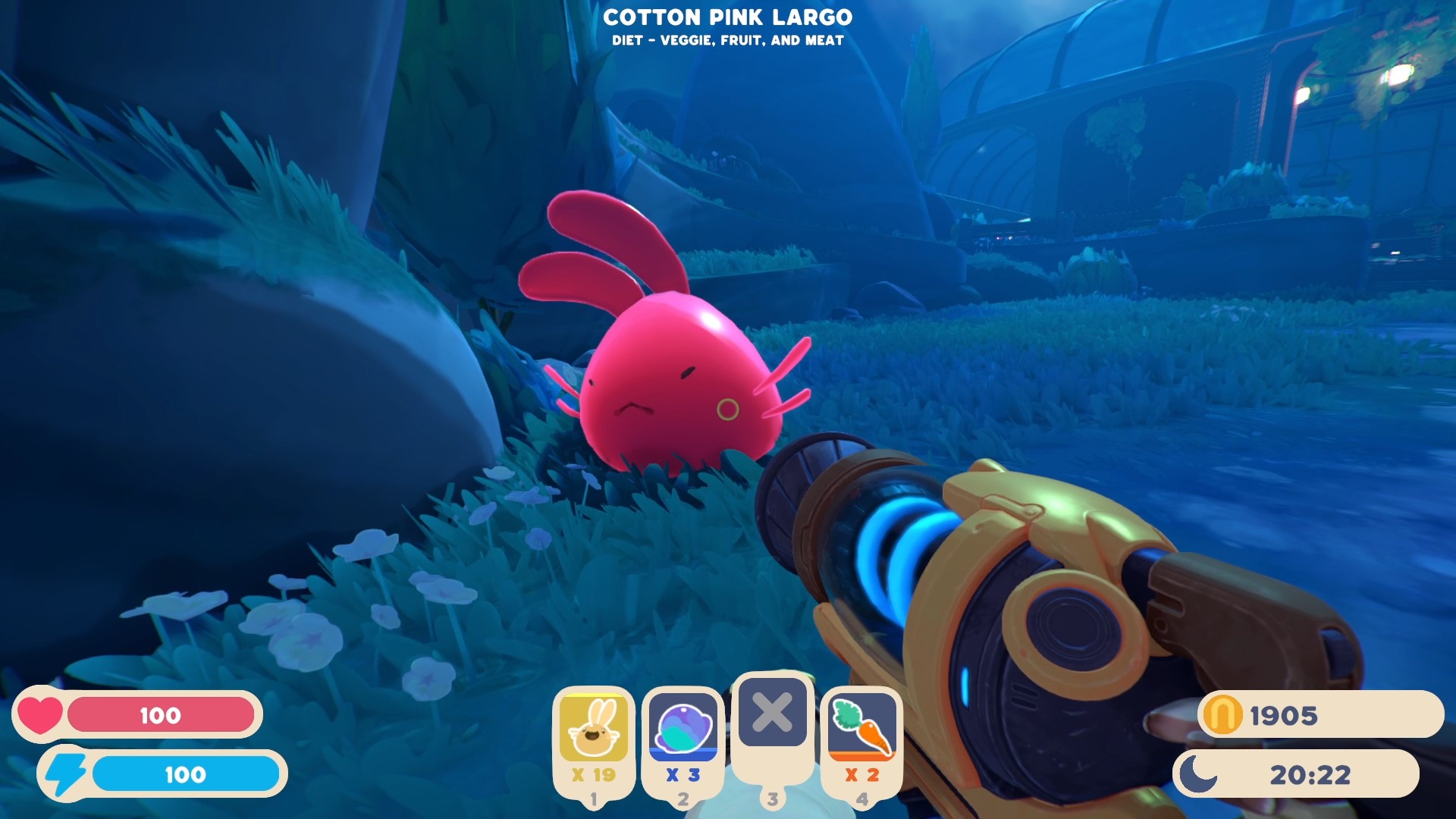 Keeping pens of regular slimes will get you far, but if you want to truly become rich then you need to create Largo slimes. These slimes are created whenever a regular slime eats a plort of another type. They’ll then become a hybrid between the two types, adopting the diet, favourite foods, and plort output of both slime types.

You need to be careful with them though as if they eat a third type of plort they’ll become corrupted tar slimes, at which point they’re no good to anyone. What’s more, they can become aggressive and even feral if you leave them unfed for too long, which can cause big problems. Only create Largos when you know you’re able to keep them well-fed. 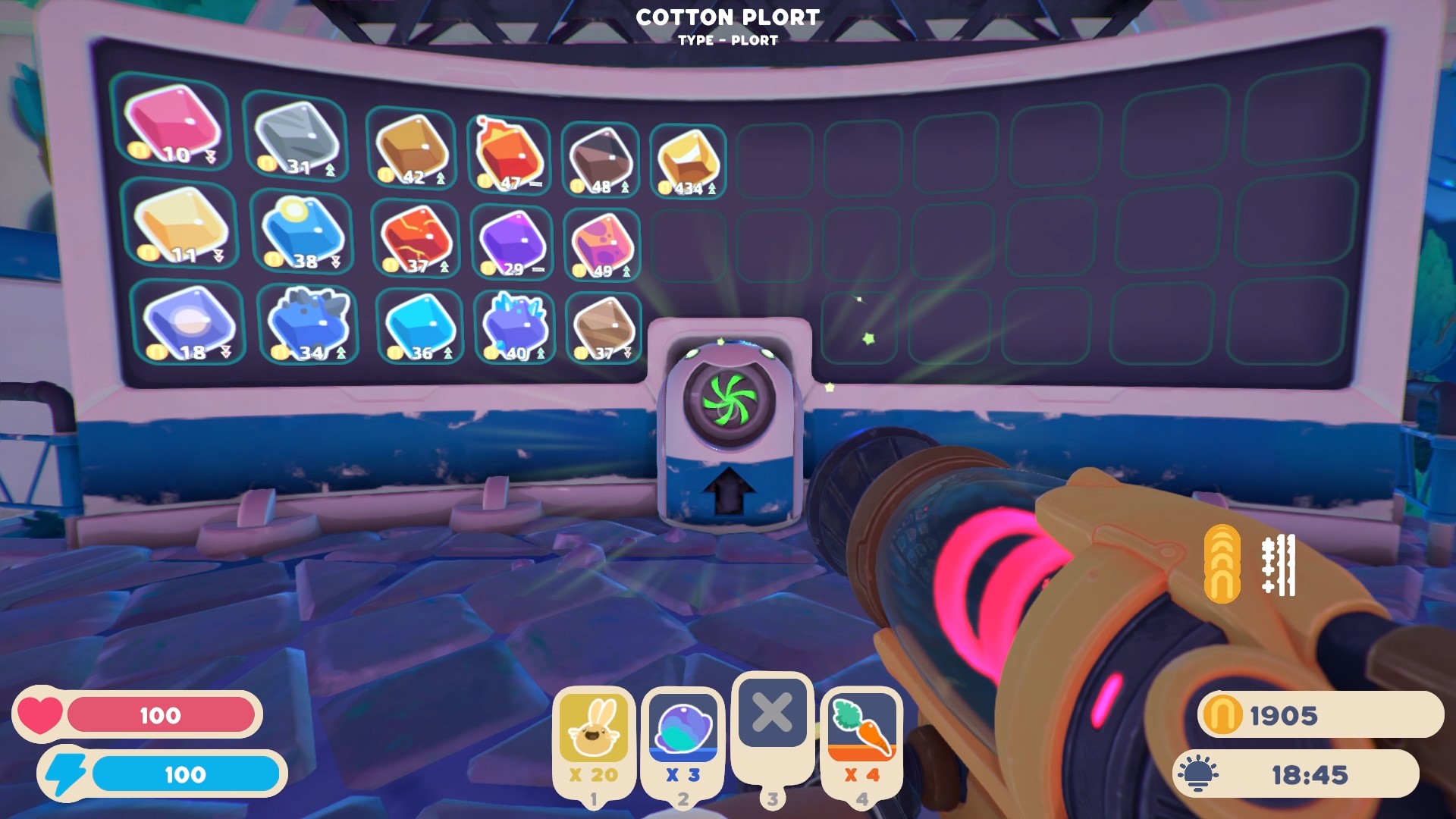 You can’t live on a single plort type forever. The plort market can cause problems if you’re selling too much of one or two types of plort, as their value will drop. If you’ve just had a big haul and sold lots of stuff, it’s best to wait a while before you sell more of the same plort, ideally selling a few different plorts in the meantime.

We’ve said the word plort too much now, it sounds like nonsense, but we’re serious plorters, so we’ll push onwards.

Hold off on expansion 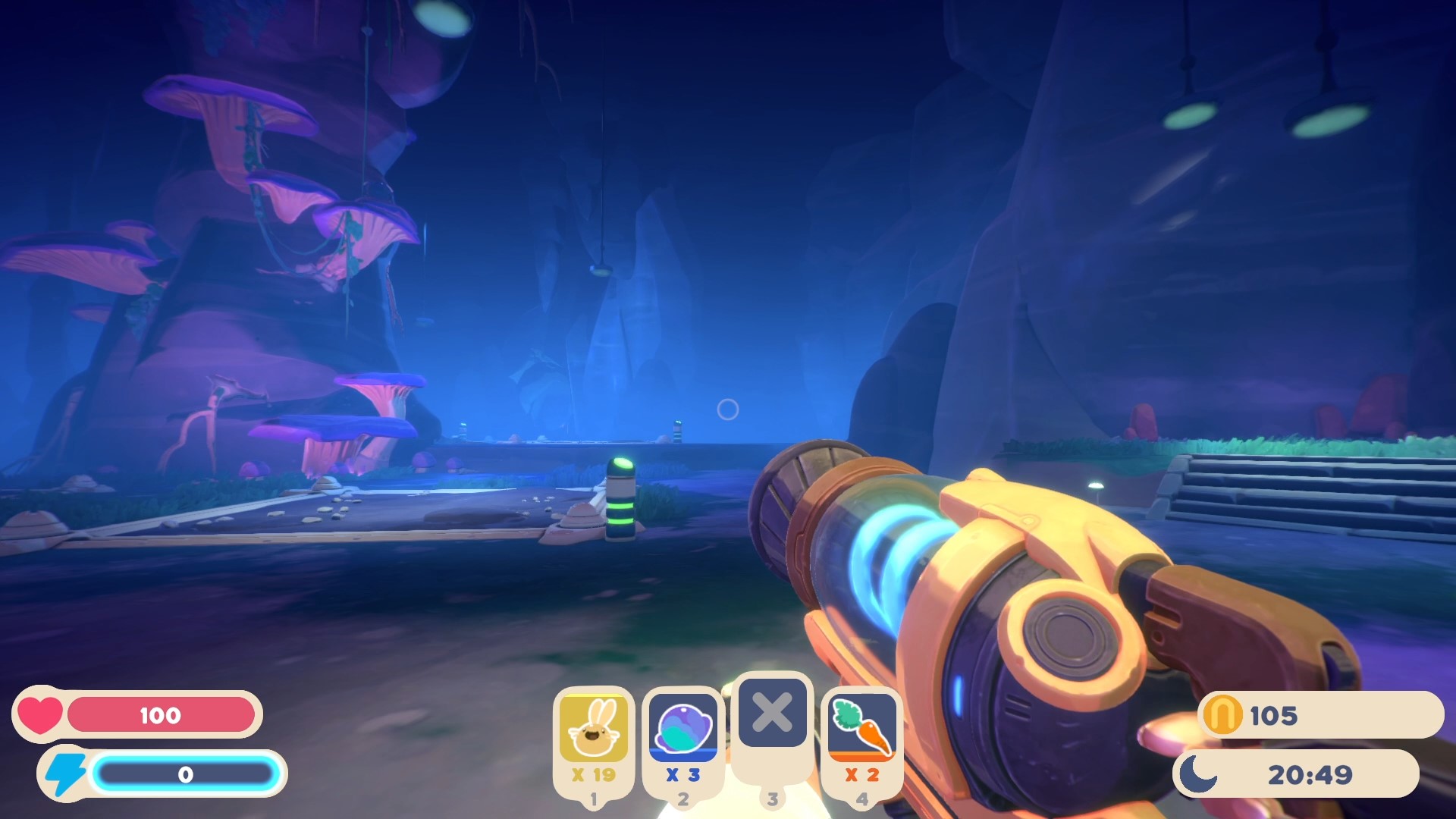 Getting a big new area on your farm is an exciting prospect, but it might be best to wait for a while on purchasing the big stuff. In the early game, these expansions can be quite expensive and you’d be surprised just how much room you start with. It’s better to spend your money on getting the most out of the space you have and only start expanding when you have to because by that point you’ll likely have made plenty of money for it.

Upgrade your gear whenever possible 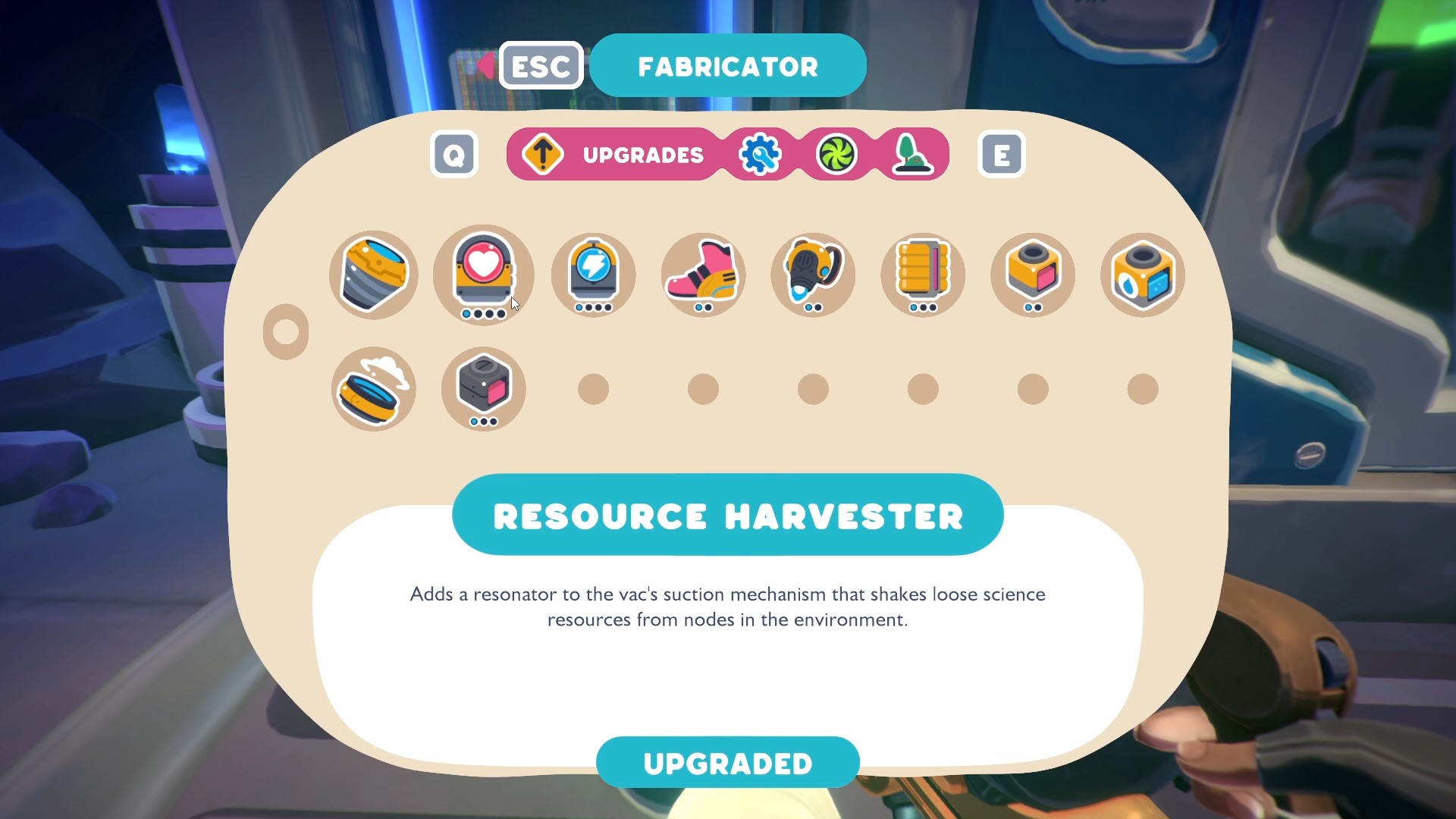 The world can be a dangerous place and your default gear isn’t going to cut it. With a combination of resources out in the world, money, and plorts, you can create all sorts of new tools. You can harvest new minerals, hold more stuff, have more health and energy, or even get new ways to traverse the world. It’ll make your life so much easier, so make sure you do it whenever you have resources to spare.