10 best finishers and how to do them 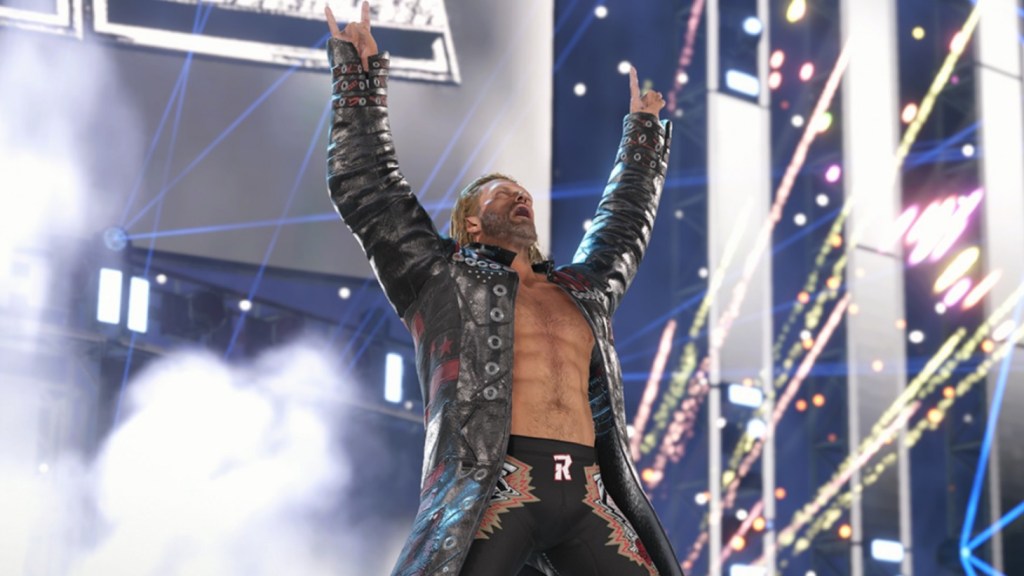 In wrestling, the big moves are what get fans out of their seats. Finishers are usually the coolest-looking moves in a wrestler’s arsenal, and they indicate that the end of a match might be looming. Some moves are so crowd-pleasing that they leave the wrestling bubble and become more popular than the wrestler that performs it.

WWE 2K22 is filled with the most iconic moves throughout WWE history, and they can all be freely assigned to Create-A-Wrestlers, for those who want to make the flashiest moveset possible. There are even a handful of moves in the game done by current AEW wrestlers, making it a true encapsulation of wrestling history. We’ve put together a collection of the very best in the game.

How to perform a Finisher

WWE 2K22 made some changes to the Finisher system, which many praised as a return to form. you must first build up the yellow bar at the bottom of the HUD. This is done by hitting moves, staying on top, or filling all three blue bars and successfully hitting a Signature move. You can execute a Finisher by pressing RT & A on Xbox, R2 & X on PlayStation, or Space & K on PC. 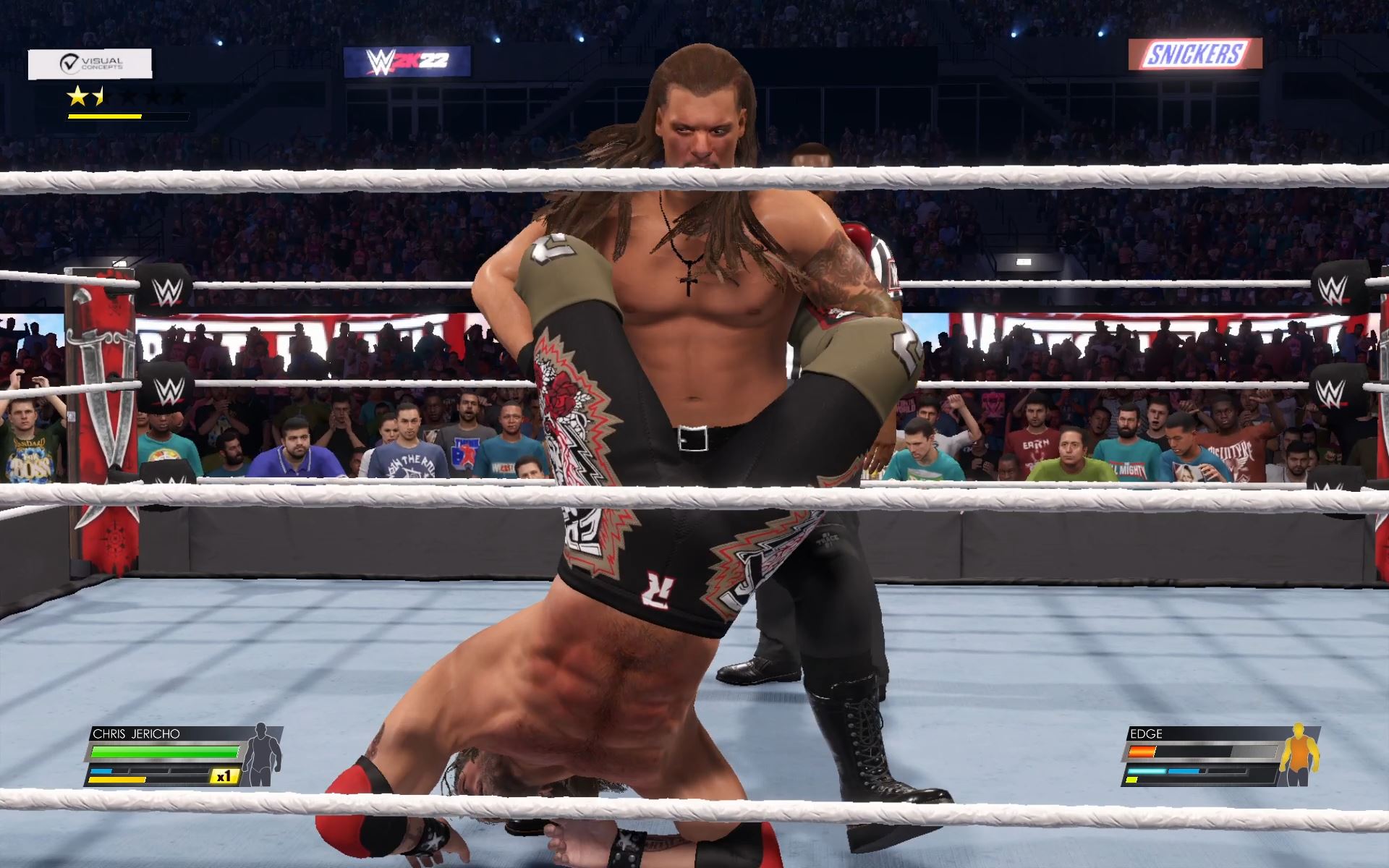 Submission finishers often go unappreciated in wrestling, but there are so many good ones that look like they truly hurt. The Liontamer is one such move, which is boosted by how rare it is to see Jericho pull it off in the modern day. This is because the move is so genuinely painful that only the most flexible of wrestlers can be contorted by it in real life. However, in the game, it can be locked in on any wrestler quite easily by hitting the finisher button by a grounded opponent’s legs.

Although he’s currently in AEW, Chris Jericho is deserving of his status as a legend in WWE, and his full moveset is still scattered throughout WWE 2K22’s, making the game much more fun. The Liontamer is present under the name ‘Elevated Boston Crab’ in the moveset menu, his classic Codebreaker is called ‘Double Knee Facebuster’, and the Judas Effect is known as ‘Spinning Back Elbow’. 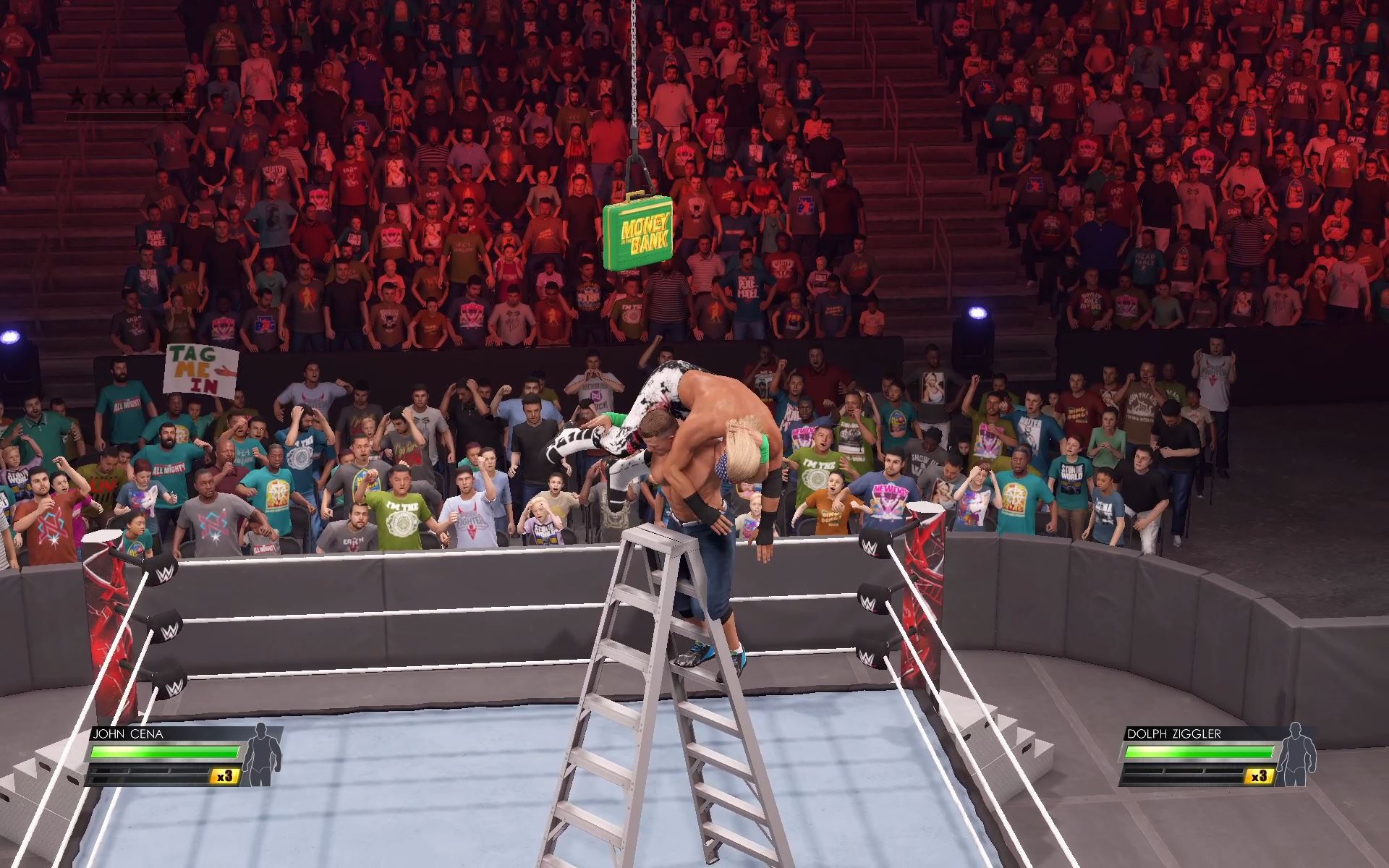 Ladder matches are chaotic affairs, especially when upwards of six competitors are involved. In these situations, building up a Finisher can be difficult enough, let alone creating an opening big enough to pull it off. That said, it makes nailing one very satisfying.

The Attitude Adjustment is a very simple move, just a lift and a slam, but that makes it the perfect move to throw someone off a ladder, as they hit the ground with great force. When you have a Finisher stored up, climb the ladder and wait for someone to climb the other side, then hit the Finisher button and watch the fireworks. 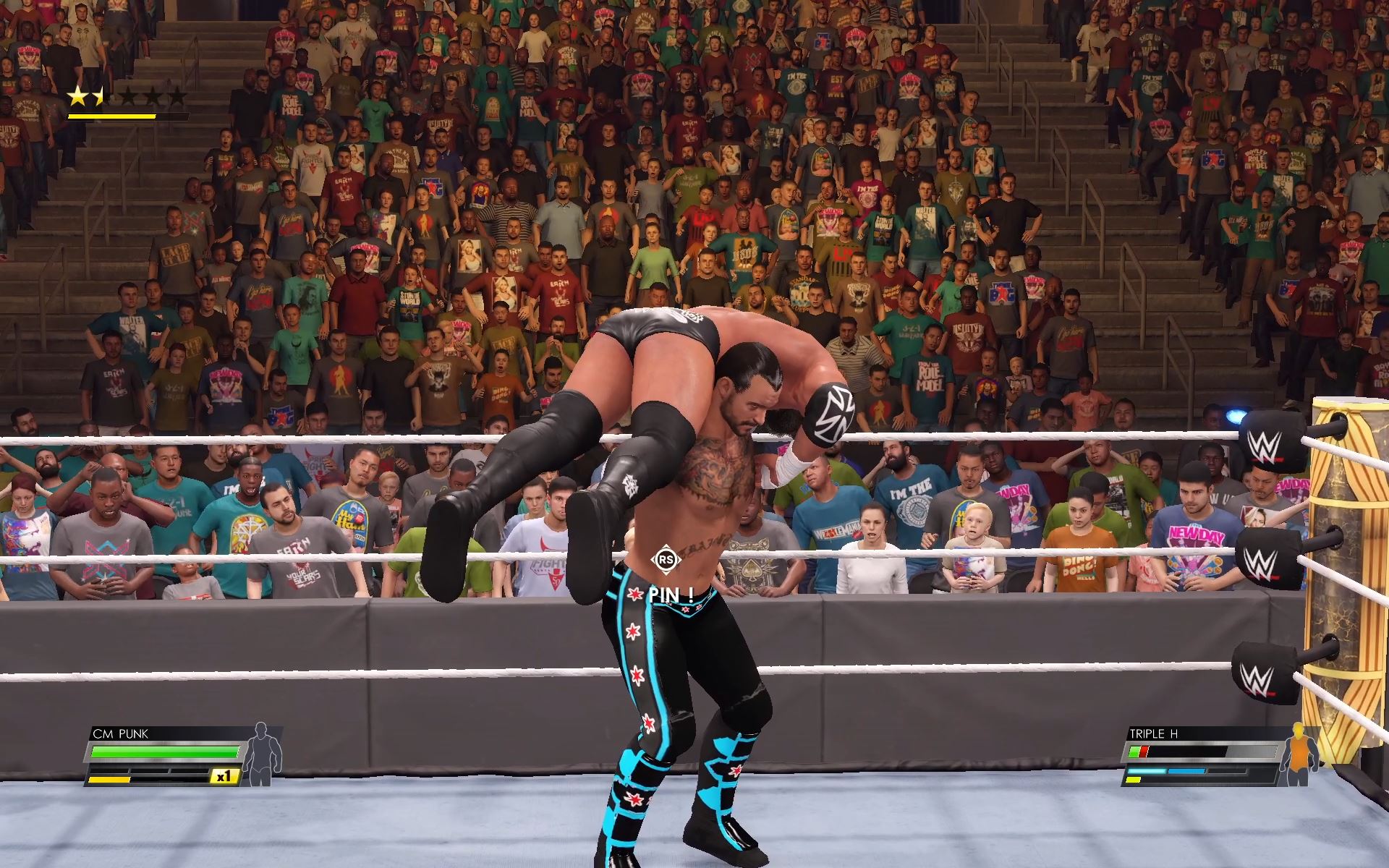 Ever the controversial figure, CM Punk made his grand return to wrestling with AEW in 2021 after seven years away. Since then, he has proved he can still go like he used to, and made fans fall in love with his work all over again. Despite having heaps of bad blood with WWE, his most iconic move was never removed from the game.

The G.T.S, or Go To Sleep for long, shows off the strength Punk has despite his size. Lifting his opponent onto his shoulders before kneeing them in the face, Punk has seen the move take him to the top of every company he’s ever worked for. You can do it in WWE 2K22 by hitting the Finisher button while standing in front of your opponent. 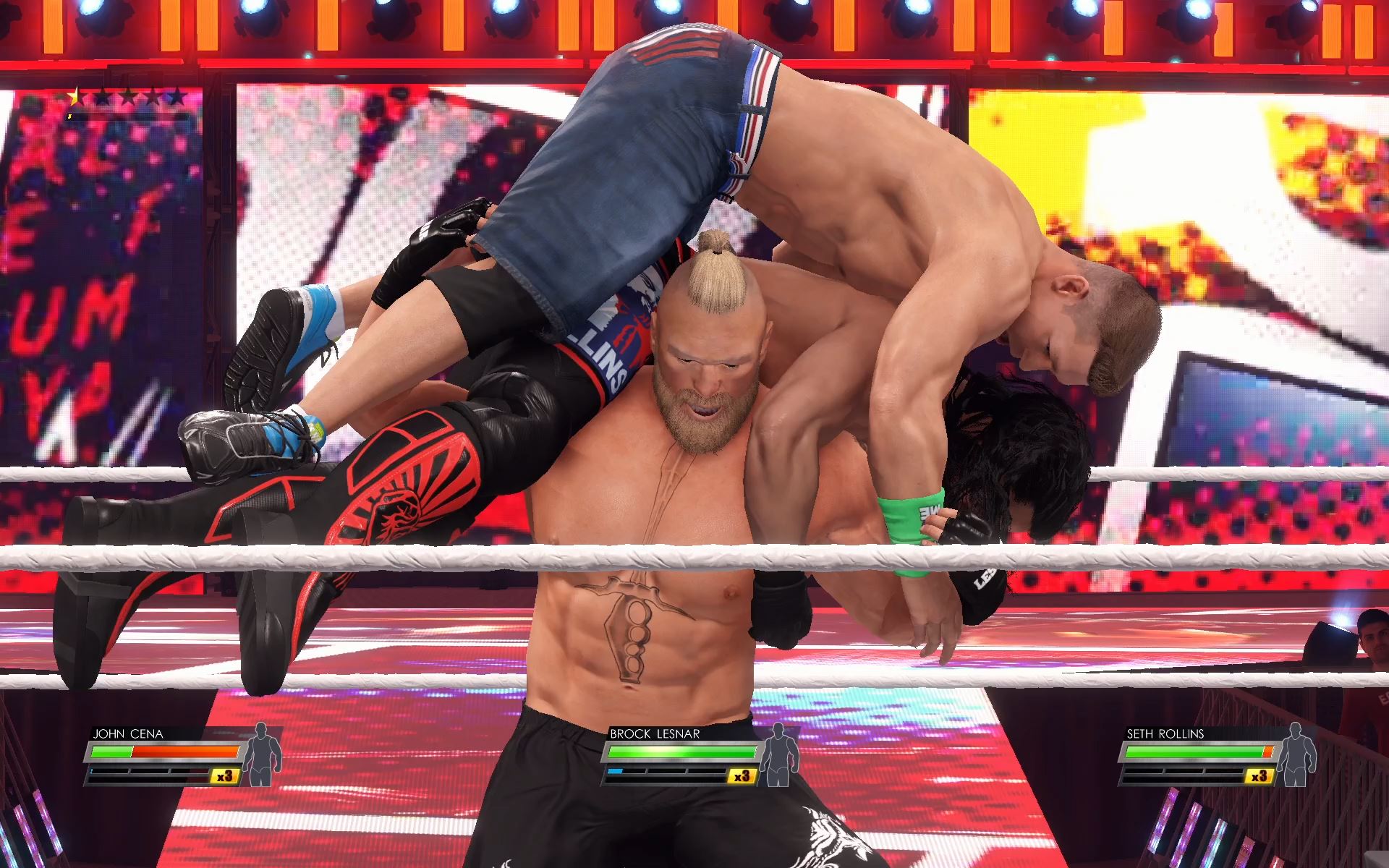 The most dominant wrestler in WWE history, Brock Lesnar has used the F5 to beat just about everyone ever put in his path. It’s a move that highlights Brock’s inhuman strength, lifting his opponent on his shoulders before simply throwing them at the ground as hard as he can.

If it didn’t already make Brock feel unstoppable, then stacking up two people on his shoulders at once sure does. You’ll need two Finishers stored up for this one. You have to Irish Whip two opponents into one of the corners, approach them, and hit the Finisher button. 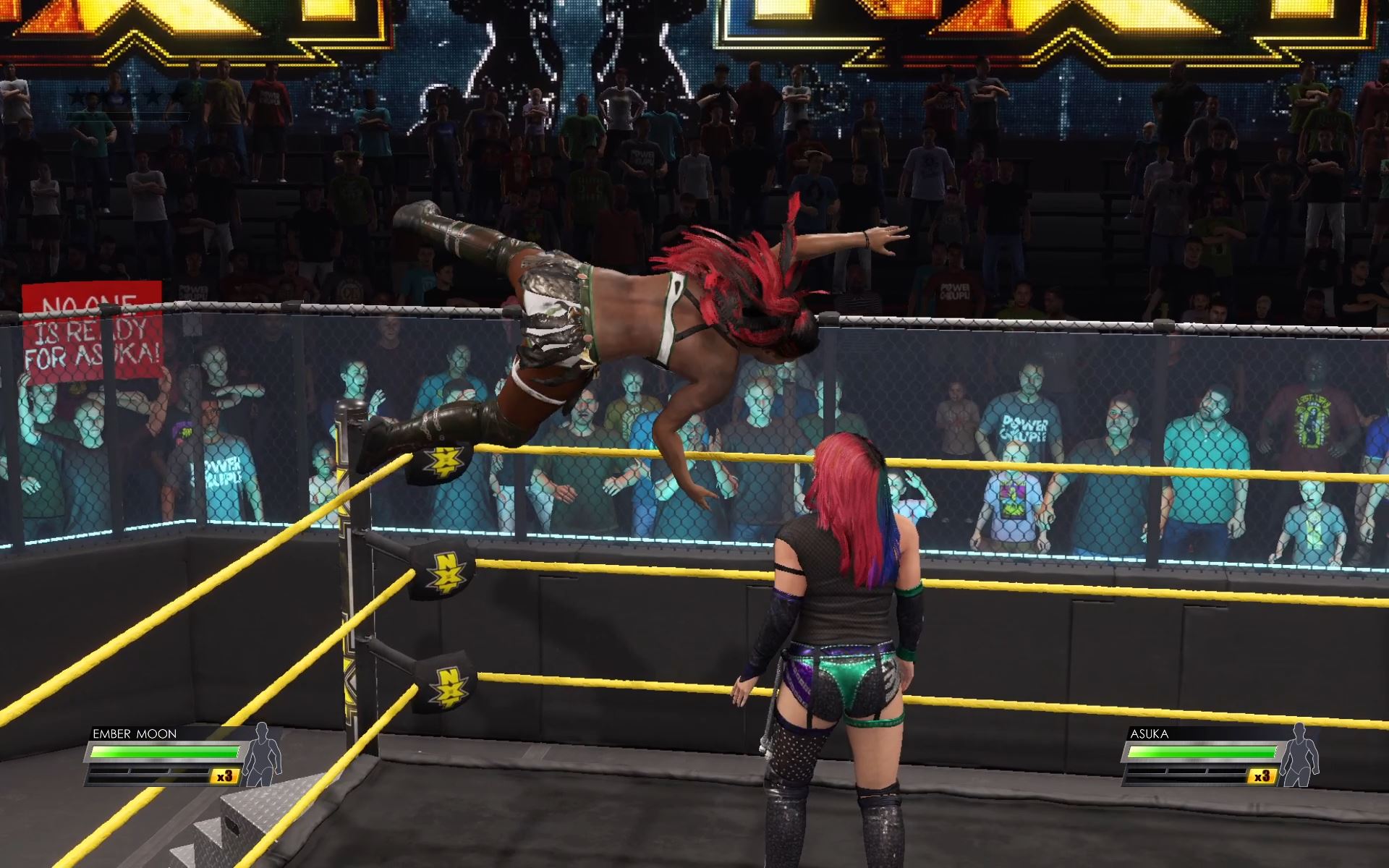 Although she is no longer in WWE, Ember Moon is still a playable character in WWE 2K22, which is great because the Eclipse is one of the most stylish moves ever in video games. For this move, Moon climbs to the top rope, before leaping at her opponent and hitting them with a Stunner.

The fluidity of the leap, turn and impact makes it something truly special, and is sure to get a reaction from any crowd. In the game, players will need to head to the top rope and hit the Finisher button when their opponent is standing. Be careful, though, as the opponent must be close enough, and if they’re not stunned they’re sure to knock you off the turnbuckle. 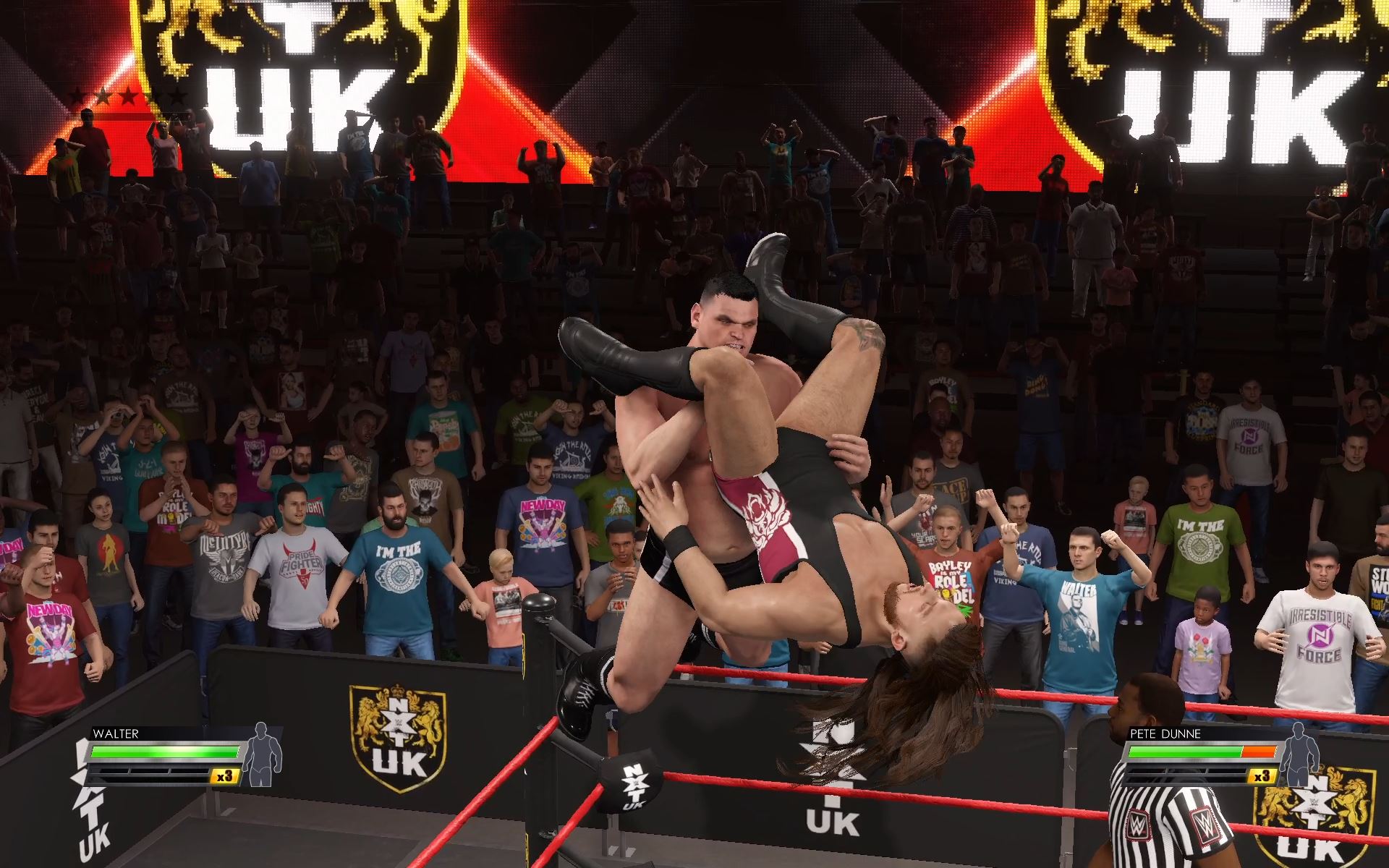 When it comes to a throwback style of wrestling, there is no one better than Walter. An absolute mountain of a man with the agility of someone a quarter his size and a Chop that’ll cave your ribcage in, he’s put on some of WWE’s best matches of the last few years, and he makes his video game debut in WWE 2K22.

He’s had some brutal matches that have ended in shocking ways, like with a Bullfrog Splash, a series of Powerbombs, or just an extremely hard Chop. His biggest move, though, is the Avalanche Powerbomb, which sees him drag his opponent to the top rope, before lifting them even higher and sending them crashing to the ground. To do this in the game, simply Irish Whip your opponent into the corner with a Finisher at the ready.

Moonsault through the announce table 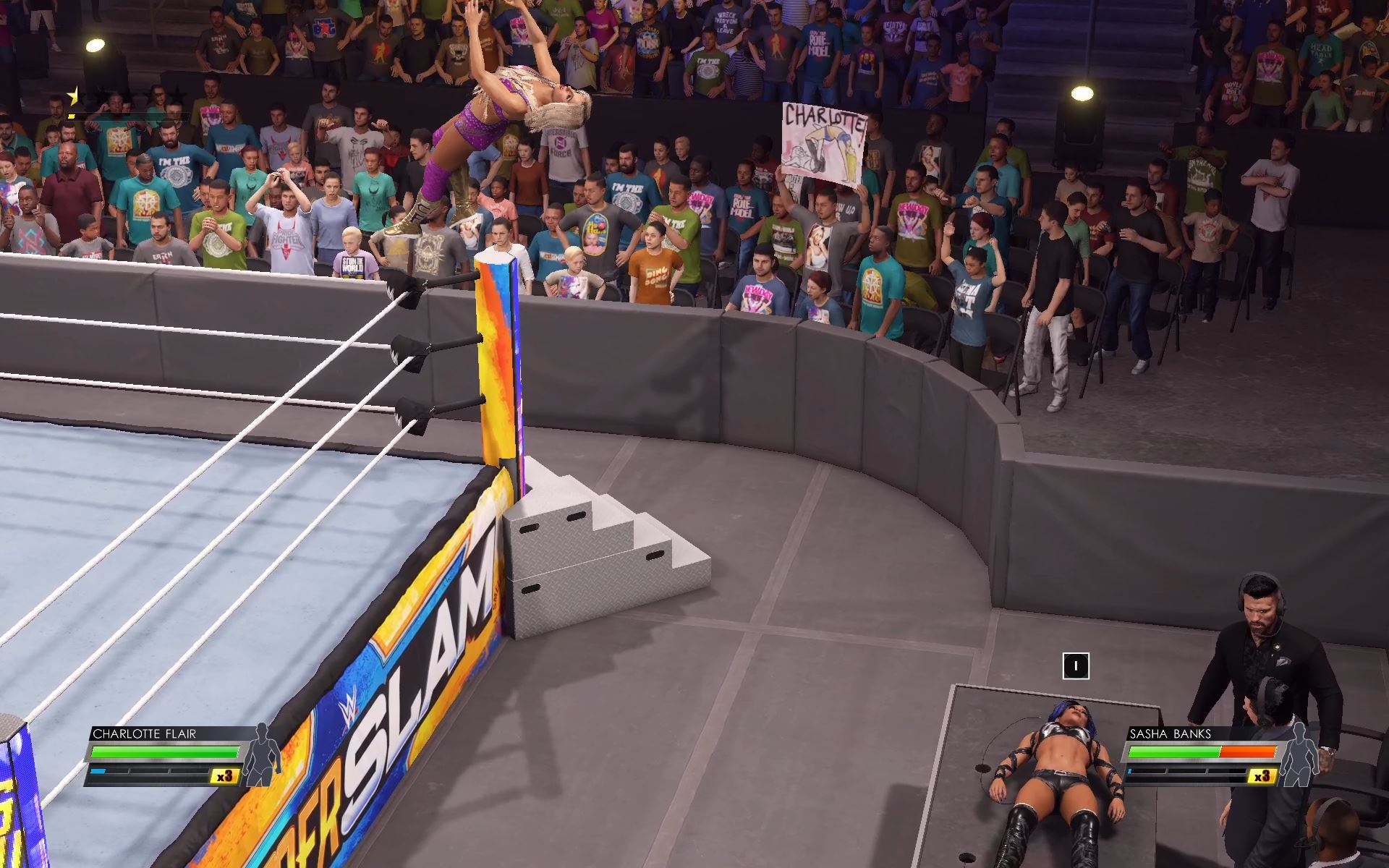 The announcer’s desk takes a lot of abuse in wrestling shows. Sitting directly at ringside, it’s common for wrestlers to weaponise it in a variety of ways. Be it throwing their opponent over it, slamming into it, or worst of all, driving them through it. The last of those options is by far the most spectacular, and it requires a lot of work to pull off, so much it’ll feel like a wrestling RPG quest.

First, you’ll need to take your opponent out of the ring and drag them over to the table. If it’s done properly, then the opponent should be leaning against it. Then, hit the Finisher button and watch the fireworks fly. There are a bunch of different announce table Finishers, but the coolest is the Moonsault, which sees you climb the turnbuckle before leaping across the ringside area onto your opponent. 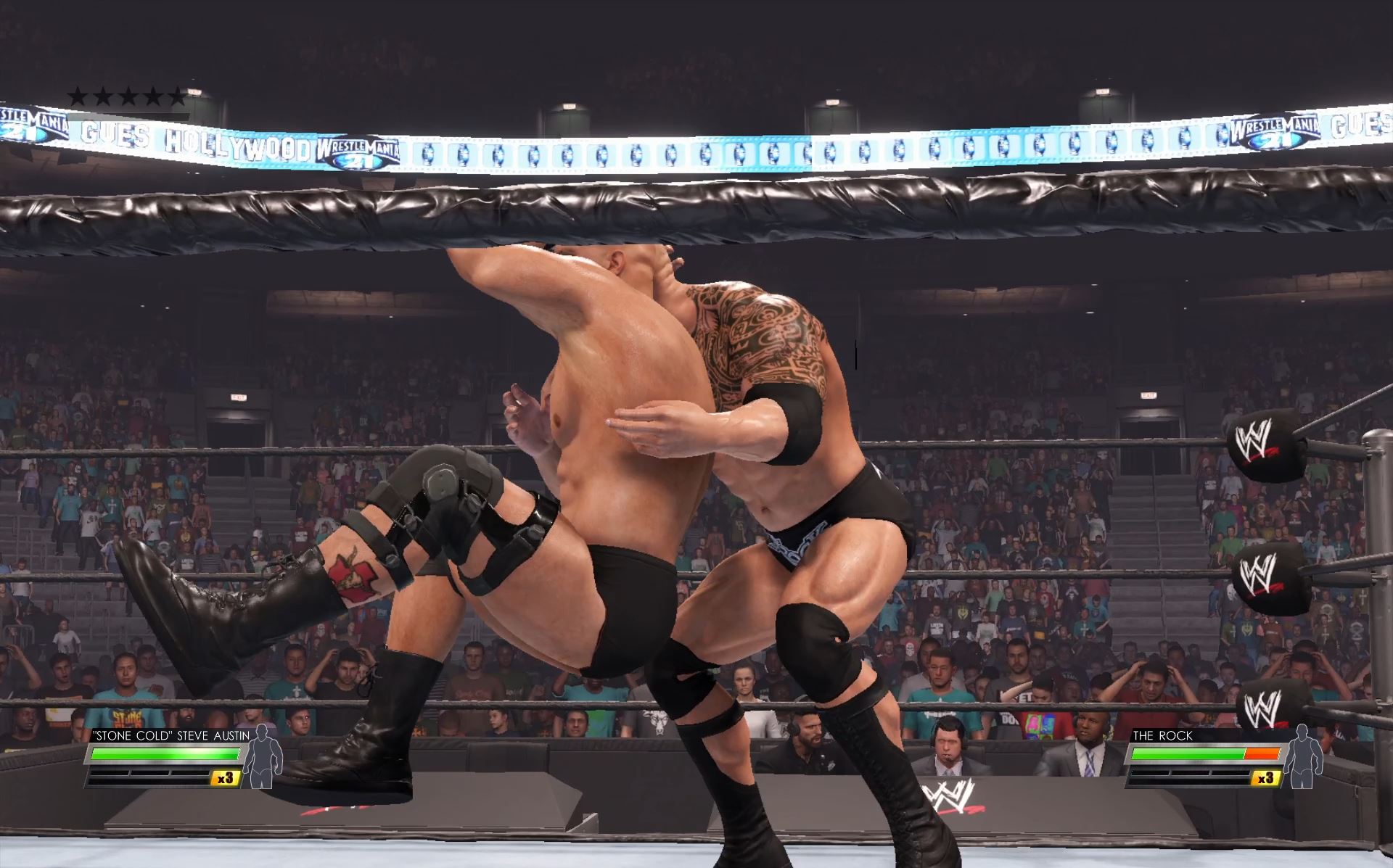 Sometimes it’s good to go back to the classic. The Stone Cold Stunner is one of the most exciting moves in wrestling thanks in large part to the wrestler who innovated it. Stone Cold Steve Austin took a fairly simple move and made it into the biggest crowd-pleaser of all time. Not to mention, any wrestler will tell you that it is the most fun move to be hit with, as you can sell it in ridiculous ways.

There are a couple of different variations on the move in WWE 2K22, such as Kevin Owens’ Stunner. You can’t beat the original though, and sending opponents flying with the Stone Cold Stunner is a great thrill. Hitting it is very simple, you just have to hit the Finisher button while standing in front of your opponent. 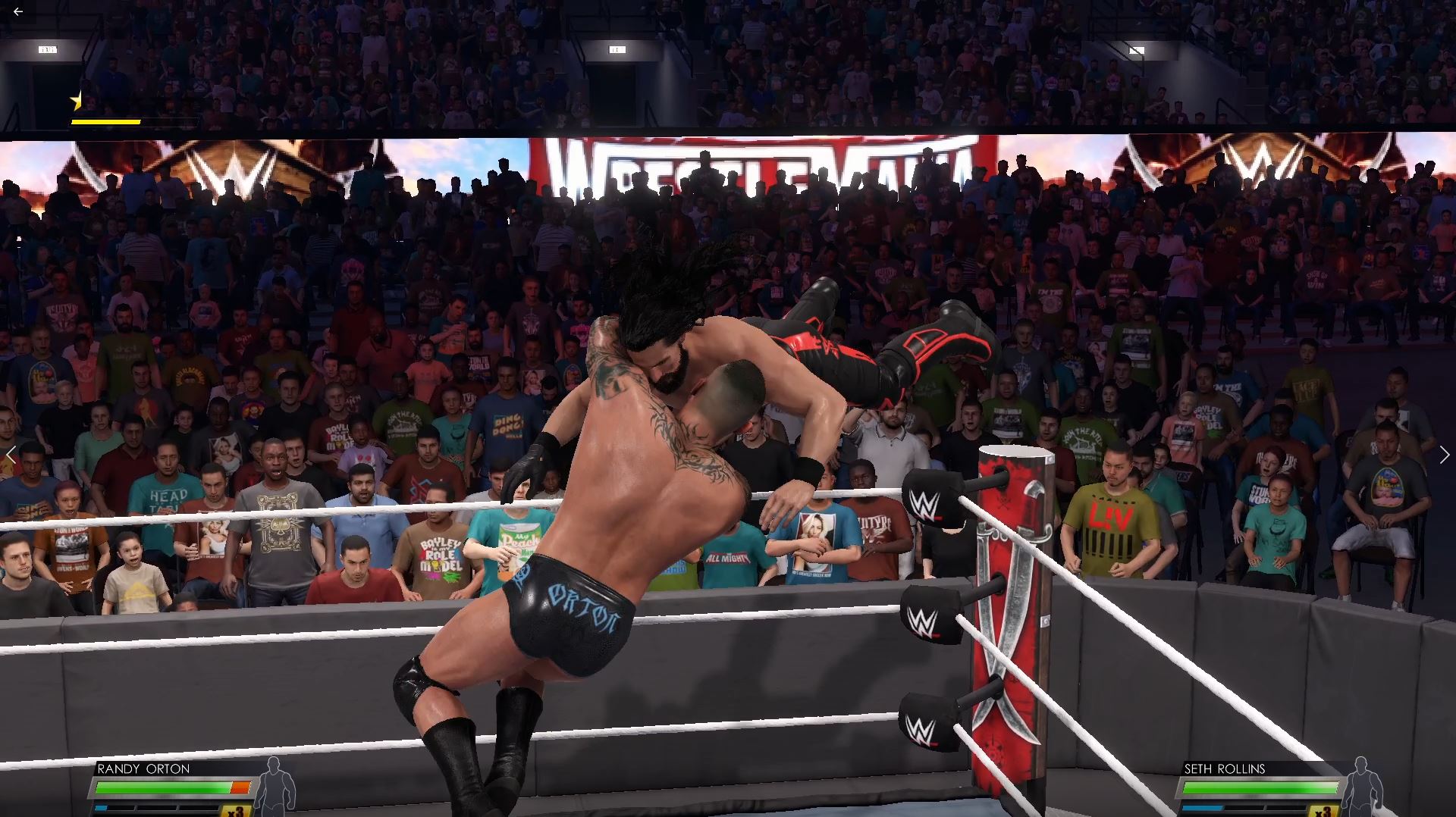 An example of a move that has a greater presence than its wrestler, the RKO has become a meme in its own right thanks to how simple and enjoyable it is. When Randy Orton hits it normally, it gets any crowd excited, but there are so many cool variations on the move.

The best one in WWE 2K22 is the catching RKO, which can be performed in several ways. When whipping an opponent into the ropes, players can throw them up in the air when they rebound. Do so, then hit the Finisher button as they’re in the air. Alternatively, it can be used as a counter. When an opponent does any kind of diving move from the top rope, hitting the Finisher button will cause you to pop up and hit them with the RKO.

The Undertaker’s Chokeslam off Hell In A Cell 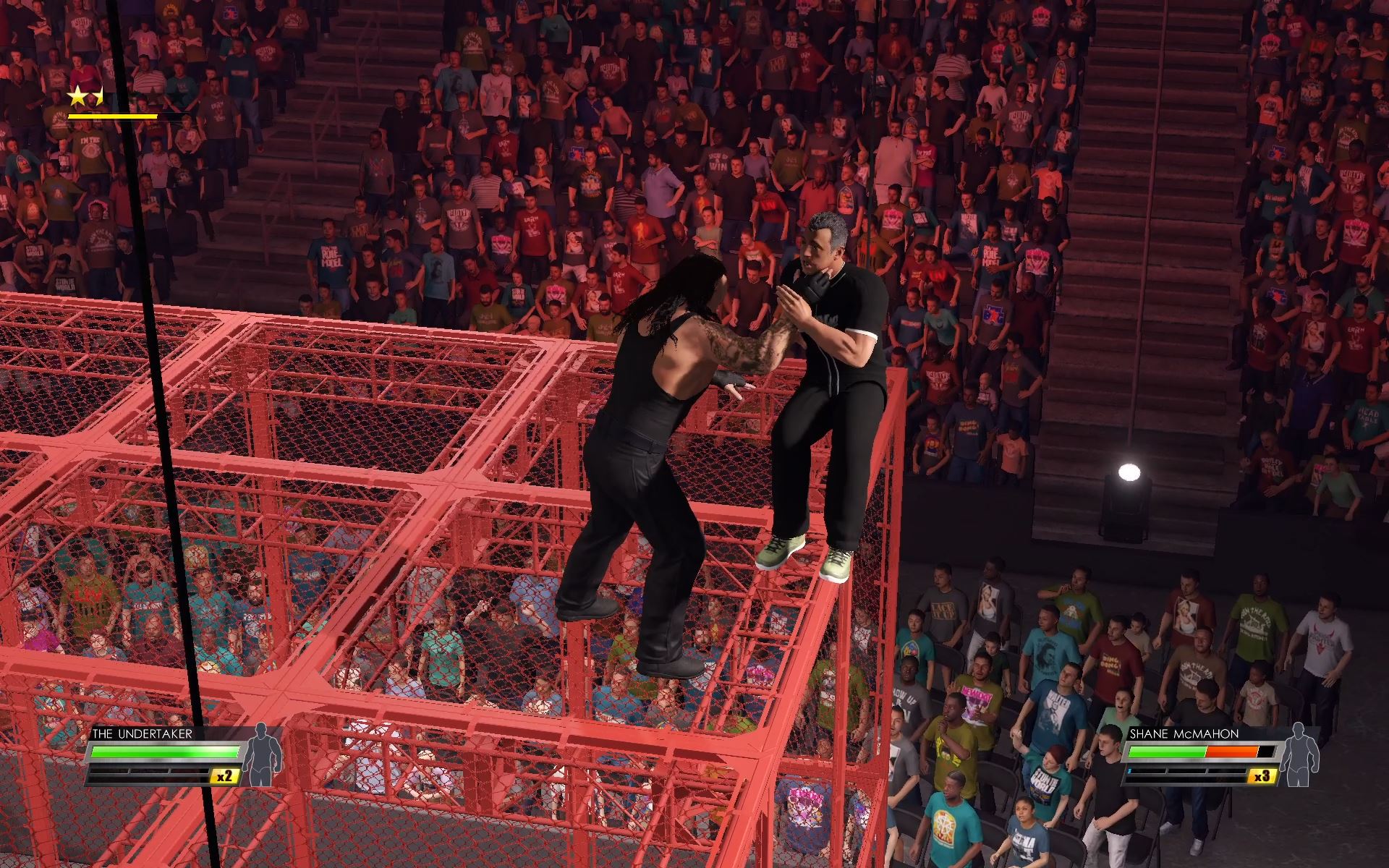 One of wrestling’s more iconic moments sees Mankind toppling from the top of the giant Hell In A Cell through the announce table at the hands of The Undertaker. Naturally, players are going to want to recreate moments like this in WWE 2K22, and the game has them covered.

First, during a Hell In A Cell match, you must throw your opponent into the cell wall enough for it to break, and then you can climb to the top. Next, if you do a Finisher when the opponent is teetering on the edge, you’ll send them flying off to their doom. There are a few variations, such as a Superkick or Attitude Adjustment, but if you’re looking for the authentic moment, the Chokeslam is the way to go.

Moon Knight episode 5 review: The MCU isn’t built for this

The Delay Of Warzone 2’s Season 2 Is A Sign…