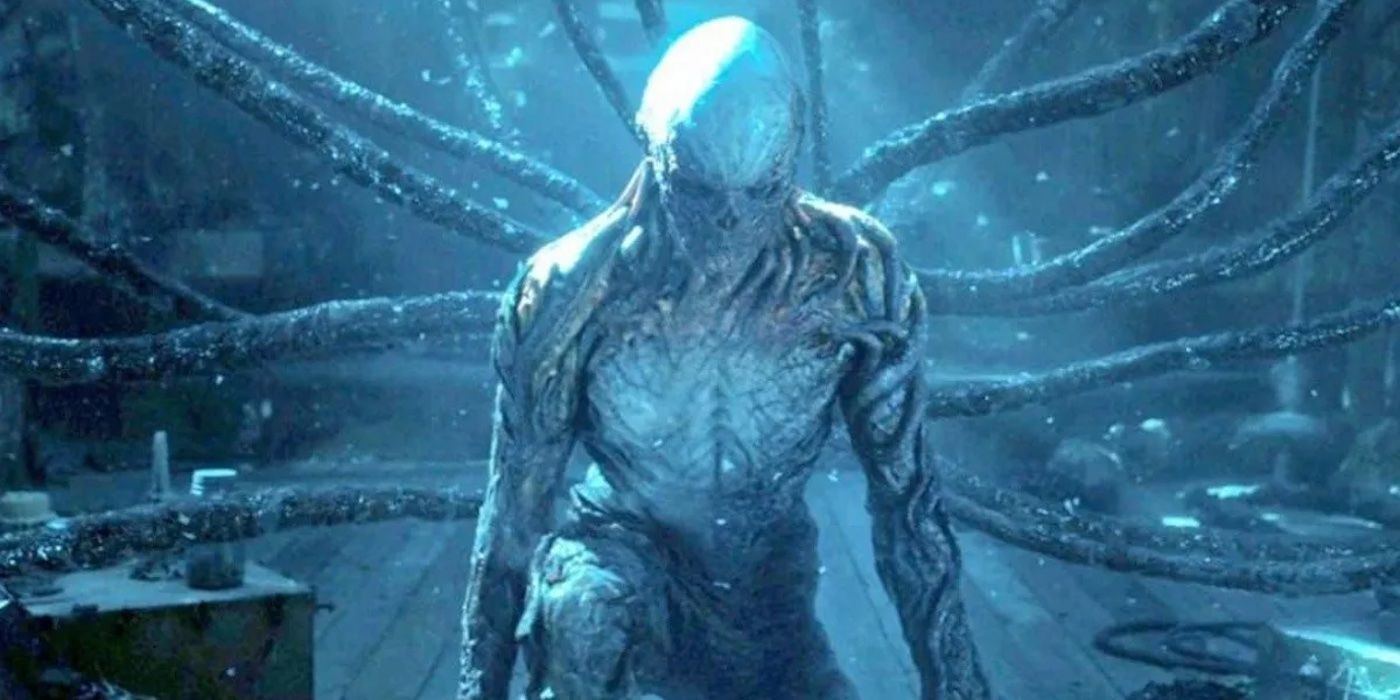 Since Stranger Things Season 1, Hawkins, Indiana has been plagued by a dark and mysterious underworld known by our heroes as the Upside Down. At first, it was just the Demogorgon terrorizing the town and dragging innocent people into the shadow realm to feed off of them. Next came the Shadow Monster and the Mind Flayer, and now Vecna (Jamie Campbell Bower). In Season 4 Volume 2, we get a little glimpse into the history of this parallel dimension. Episode 7 revealed that the barrier between these two worlds was first opened by Eleven (Millie Bobby Brown) when she banished Henry/One/Vecna there with her powers after he massacred everyone else at Hawkins Lab.

In Episode 9, Vecna pulls a classic villain move and goes into detail about his rise to power and his evil plans to destroy the world and rule over what’s left of it. During his monologue, we learn that in his banishment he stumbled onto a world “unspoiled by mankind.” He tells Eleven about the moment he stumbled onto the power of Mind Flayer/Shadow Monster and reveals that he took it for himself. Even with these revelations, we still have plenty of unanswered questions and aspects of this world left to explore.

Following the arrival of Stranger Things Season 4 Volume 2, creators Matt and Ross Duffer sat down with Collider’s Editor-in-Chief Steve Weintraub to discuss Seasons 4 and 5 and all things Upside Down. In speaking about where we’ll be spending our time in the show’s final season, Matt Duffer revealed “It’s mostly in Hawkins, and there’s a lot obviously in the Upside Down.” Season 4 saw our characters willingly diving into the Upside Down more frequently as a means to attack Vecna and save each other. Naturally, as the Upside Down spills out into Hawkins we’ll certainly be seeing even more overlap between those two locales than we have before.

With all these varying monsters that we’ve seen from the Upside Down, Weintraub made sure to ask if the Duffers could tell us anything about the hierarchy. Earlier in the season, Dustin assumed that Vecna was essentially the Mind Flayer’s second in command, while the audience assumed maybe Vecna was the one at the top. Meanwhile, Vecna’s speech about finding that power seemed to imply a sort of hybrid of the two. “We do a couple more big reveals in Volume 2, but it’s all related to Vecna, Henry, and his journey. But what we haven’t really discussed is exactly what the Upside Down is,” said Ross Duffer.

Naturally, there are a handful of big reveals about the Upside Down that the Duffer Brothers have been saving for the fifth and final season. Ross Duffer continued, saying “The big reveals that are coming in Season 5 are really about the Upside Down itself, which we only start to hint at. There is that moment where we realize in episode seven this year that it’s frozen in time.” In Season 4, when Nancy attempts to arm herself and her friends with the guns she has stashed in her bedroom in the Upside Down, we find that they aren’t there. The Upside Down is suspended at the moment when Will Byers (Noah Schnapp) first goes missing. The Duffers have also revealed that Will will “be a big part” of Season 5, so perhaps his connection to the Upside Down is part of those major reveals. Ross Duffer posed a few questions we can expect to get answers for in Season 5, including “What was that where Henry was when he was found? The Mind Flayer, where is that?” What questions do you want to see answered about the Upside Down?

Writing for Season 5 of Stranger Things is set to begin in August, and you can watch the entirety of Seasons 1-4 right now on Netflix.

‘Stranger Things’ Creators Explain Why [SPOILER] Had to Die

Star Wars Was a Major Inspiration on The ‘Stranger Things’ Season 4 Finale, The Duffer Brothers Say