Who is Lady Thor, the new hero of Marvel’s Thor: Love and Thunder? 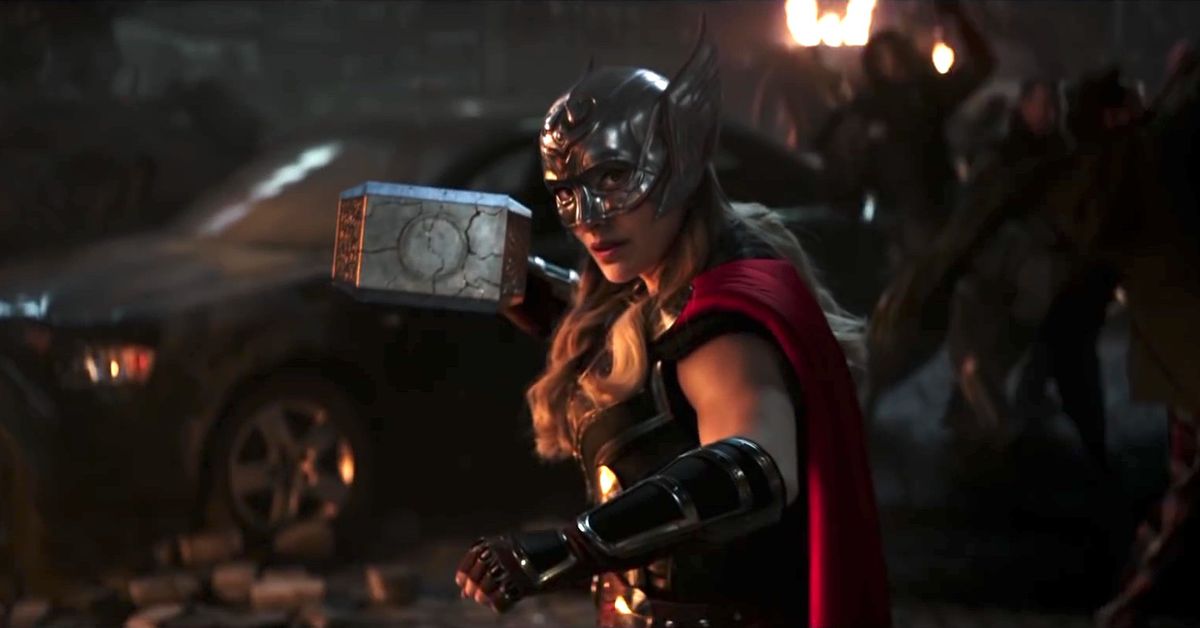 Ever since Natalie Portman strode onto the stage of San Diego Comic-Con 2019 holding aloft the hammer of Thor, Marvel fans have been waiting to see her return to the role of Jane Foster, but this time as Thor. With the release of the first teaser trailer for Thor: Love and Thunder, they’ll have their chance. But anyone else might be wondering: Since when does Jane Foster possess the power of Thor?

The answer is: Since 2014’s Thor #1, in which a mysterious new superheroine appeared in the Marvel Universe, with Mjolnir in her mighty hand. Come with us on a quick trip through the story of Jane Foster’s turn as the god of thunder.

Whosoever holds this hammer, if they be worthy, shall possess the power of Thor

With the collaboration of many great artists, comics writer Jason Aaron took the helm of Marvel’s Thor comics in 2012, and stayed there long enough to complete a seven-year epic of godly drama. The very first thing he did was introduce the character of Gorr the God Butcher, an antitheist alien bent on killing every god in the universe in order to free mortals from believing in them, who’ll appear in Thor: Love and Thunder as played by Christian Bale.

But two years into his run, Aaron gave the whole Thor cosmology a mighty twist. Thor lost a mental struggle with the legacy of Gorr, and realized in his heart that gods were not worthy of mortal adoration — and thus, he became incapable of lifting Mjolnir. Although, as far as comics fans knew, Thor lost the ability to lift his hammer after Nick Fury whispered something mysterious in his ear. Aaron and his collaborators kept the secret of Thor’s depowerment for three years.

But Aaron also introduced a new wielder of Mjolnir, a mysterious helmed woman who referred to herself only as Thor. Aaron and Thor artist Russell Dauterman committed hard to that idea. “You pick up this book and it just says ‘Thor’ on the cover, which features a new female version of Thor,” Aaron told Comic Book Resources in 2014. “It’s pretty much telling you she’s not She-Thor or Lady Thor. She’s not Thorika. She is Thor. This is the new Thor.”

Just like the source of Odinson’s unworthiness, Thor’s true identity remained a tantalizing secret, and also helped to make the “Thor” name truly stick to her. If they couldn’t call her “Lady Thor,” and she didn’t have a secret identity, fans simply had to call her Thor. The guy Thor started going by “Odinson,” as Thor’s book proved more successful than even Aaron’s first 2012 Thor series. Finally, seven months after her debut, Aaron and Russell Dauterman revealed the truth.

Thor was Dr. Jane Foster. Until she became Thor, Aaron’s Thor epic had been pretty light on involving Jane — early in the series, it was revealed that Jane had been diagnosed with an aggressive cancer, and despite Thor’s urgings, decided to rely on medicine for treatment rather than the kind of magical means that often require an unexpected cost. The reveal that she was Thor showed that all that was half misdirection: half set-up, half exactly-the-thing-Jane-hadn’t-wanted-from-magical-cancer-cures.

Jane had found herself worthy, and couldn’t stand by when she could prevent suffering as a superhero. But, every time she transformed back from goddess to mortal, she transformed into her body’s “default” state, erasing the progress made during her cancer treatments. Being Thor was saving others, but it was killing her. Still, she kept at it, all the way up through the finale of Aaron’s Thor tenure, War of the Realms, which featured four Thors — Thor Odinson, two other versions of him brought out of time, and Jane-as-Thor — squaring off against the dark elf warlord Malekith wielding the long-lost weapon of Gorr the God Butcher, All-Black, the Necrosword.

How much of any of this — Thor’s unworthiness, Jane’s cancer, Gorr’s butchery — will make it into Thor: Love and Thunder remains to be seen from this first teaser trailer. Gorr doesn’t even appear in it, and he’s a weird, almost-naked grey alien with tentacles on his head, so, like, we would have noticed.

Wait, but how did Mjolnir come back after Hela broke it in Thor: Ragnarok?

Oh please, if I had a dime for every time Mjolnir got destroyed. Jane herself threw it into the center of the sun and told it to stay there during Aaron’s run. There are a million ways that Thor: Love and Thunder could put this particular Humpty Dumpty back together again, trust me.

‘The Chalet’ coming to All 4 in May – Entertainment Focus