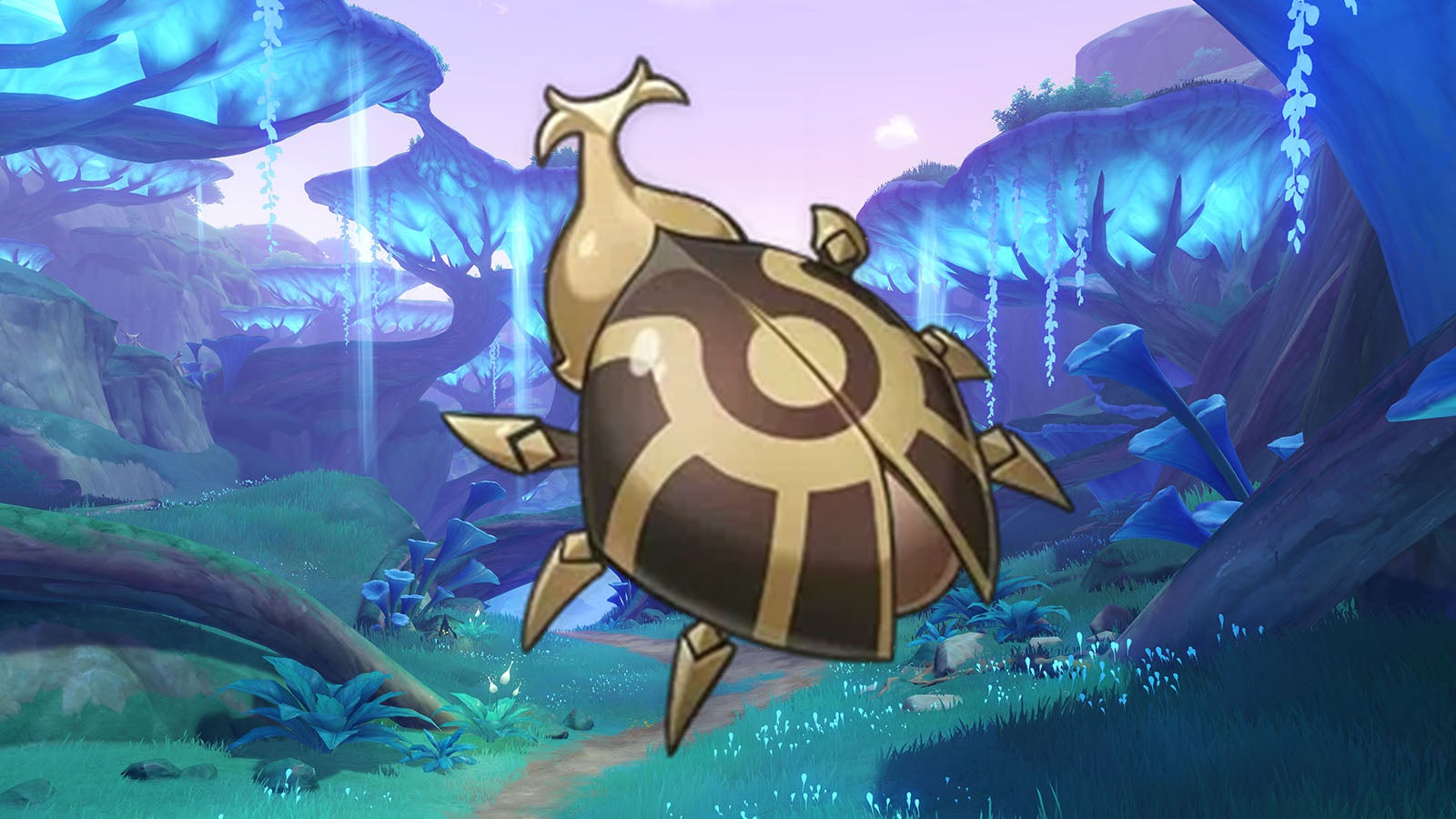 Scarab is a beetle you can find crawling on the sand in Sumeru’s desert region or underground, which you’ll find vital for ascending some characters in Genshin Impact.

Genshin Impact 3.1 introduced polearm-wielding five-star Electro character Cyno. One of his ascension materials is the Scarab, so, if you’ve been lucky to unlock him already, you’ll need these bugs if you want to increase his power.

To ensure you can max out this powerful character as fast as possible, this guide covers everything you need to know about how you can use Scarab and where to find Scarab.

Where to find Scarab in Genshin Impact

You will find Scarabs in Genshin Impact exclusively in the Sumeru region, specifically the desert region to the West that arrived as part of the 3.1 update.

You can get your first Scarab through a cavern tunnel right next to the first Statue of the Seven when you first come to the desert. Aaru Village is just up ahead and, if you head to the northwest of the village during the day, you’ll find a child called Nawaz who’ll not only tell you about Scarabs, but also give you four for free – although this only happens once.

From this village, head south east until you reach Dar al-Shifa, which is occupied by enemies. There are two Scarabs here, but you’ll need to head underground to find them. The opening is towards the end of this encampment and you’ll need a Geo-based character to break through a hole in the ground.

For more Scarabs hidden underground, two on the map below appear like they can be found along the road south from Aaru Village. You actually find these, however, by going underground via Abdju Pit to the north and following the Golden Slumber World Quest.

Back on the surface – from the teleport waypoint south of Abdju Pit and east of Sobek Oasis, glide down to the area below and you’ll find a Scarab near a cactus. From there, instead of following the path, head south west and you can pick up three Scarabs along here, then use a four-leaf sigil to reach high up a rock ahead where another Scarab is waiting.

Head west from here and you’ll eventually reach another teleport waypoint, while a Scarab is also waiting by a cactus. From this waypoint glide down to Sobek Oasis and follow the sandy path to find three more Scarabs.

Next, head to the south of the desert next to Valley of Dahri where the second Statue of the Seven is. One Scarab is waiting next to the statue. Drop off the cliff and glide down to the area below and you’ll find two Scarabs to pick up together. Don’t dally though, as there’s an ancient machine with its sights on you.

Warp back to the statue and then head west. Just as you head up an incline and almost see an old temple in front of you, you should also find one Scarab along the path.

You can find a Scarab sitting atop of rock structure, which you can grapply up by using a four-leaf sigil, near the teleport waypoint that sits in the most southerly part of the desert. North of the waypoint is an enemy camp but if you avoid it, you’ll find a Scarab to the right and two Scarabs to the left, with one perched on a rock.

The west of this region is the Hypostyle Desert, and here we’ll start in the southern area where there are two dunes – each also home to temple ruins. You’ll find two Scarabs near the Dune of Elusion teleport waypoint.

Head east from here to near the cliff face and there’s a Scarab between two red trees. Go north from there and, while there’s less landmarks, another Scarab can be found crawling near a dry bush.

Next, head further west to the Dune of Magma where you’ll find a Scarab on some ruins just southwest of the main temple structure. But, in between, there’s also a temple ruin you should stop by which has one Scarab to collect, and some four-leaf sigils will help make this less of a trek.

Northwest of the Dune of Magma are two more Scarabs – one on top of another ruin structure, the other slightly further down. The area has some tough machine enemies roaming, but also four-leaf sigils to help you zip around.

There’s also markers north of both dunes indicating the locations of Scarabs but these are underground, which brings us to the next part of the farming run.

You’ll find a good number of Scarabs at the Mausoleum of King Deshret, although the majority of these are actually underground. To reach these areas, however, you first need to gain access to the Mausoleum, which can be done by following the Golden Slumber World Quest.

If you arrive at the mausoleum early though, you’ll still be able to find Scarabs on the surface. There’s two northeast of the mausoleum and two more very close by and directly north of the structure.

The following instructions assume you have gained access to the Mausoleum of King Deshret and activated all of the teleport waypoints:

From the most easterly teleport waypoint (and actually closer to Khemenu Temple), head straight until you come to a room where you can turn left. Now follow the corridor until you come to a door on your right; if you have completed the necessary puzzles on the World Quest, this should be open and you’ll drop deep down. At the bottom, head south and along this path you’ll find four Scarabs.

You can explore two levels from the underground teleport waypoint north of the mausoleum; there are two Scarabs on the upper area along the steps and one Scarab in the lower area in front of a canine statue.

From the underground teleport waypoint furthest southwest of the mausoleum, glide down southwest to find one Scarab by a torchfire and you’ll find another northeast where the beetle crawling near a Starshroom.

Next go down the steps leading from the underground teleport waypoint located on the southwest corner of the mausoleum into a big underground cavern. Here use the four-leaf sigils to the side to reach the higher ground in front of you and find three Scarabs. If you head up from here, you’ll enter a chamber where another Scarab can be found at the end of the room.

Follow the path back down and you’ll eventually come to another cavernous room. Glide down and you’ll find one Scarab in the southeast corner behind a pillar of rock, while another Scarab is hiding underneath some ruins, which can be accessed via a gap in the side.

From the teleport waypoint northwest from the mausoleum, there’ is a hole you can drop into which acts as a shortcut to the mausoleum’s underground (be aware that the entrance first needs to be opened from the inside before it can be used). Follow this route until you can drop down to the lowest level where you’ll find two more Scarabs.

Next, head to the northwest section of the map where you’ll find the Garden of Endless Pillars domain. You’ll need to solve a puzzle to access it, but afterwards you can collect four Scarabs nearby.

Head to the Dune of Carouses,- the entrance can be reached on the east side, so it makes sense to travel there from the nearby teleport waypoint. Once inside, you’ll need to solve a puzzle that allows you to traverse to a higher area where a Scarab is yours to take.

A Scarab is just a short way south of the third Statue of the Seven, which is north of Khemenu Temple, so just drop down and pick it up.

This leads us to the last area of the desert in the northeast. Starting from the teleport waypoint just west of Khaj-Nisut, you’ll find two Scarabs on a rocky surface to the southwest. Continue southwest and you’ll see a higher area that you can reach with via a four-leaf sigil, where you’ll find two more Scarabs.

In between Khaj-Nisut and Aaru Village are two teleport waypoints. Head northeast from the southwestern waypoint, ignoring the gust of wind, and enter the ravine to find two Scarabs.

There’s a Scarab right by the northeastern waypoint. Facing south, you’ve then got a bit of a steep climb ahead of you as well as a group of enemies waiting to attack, but also one Scarab hanging by the tree.

The Bastard Son and the Devil Himself Season 1…