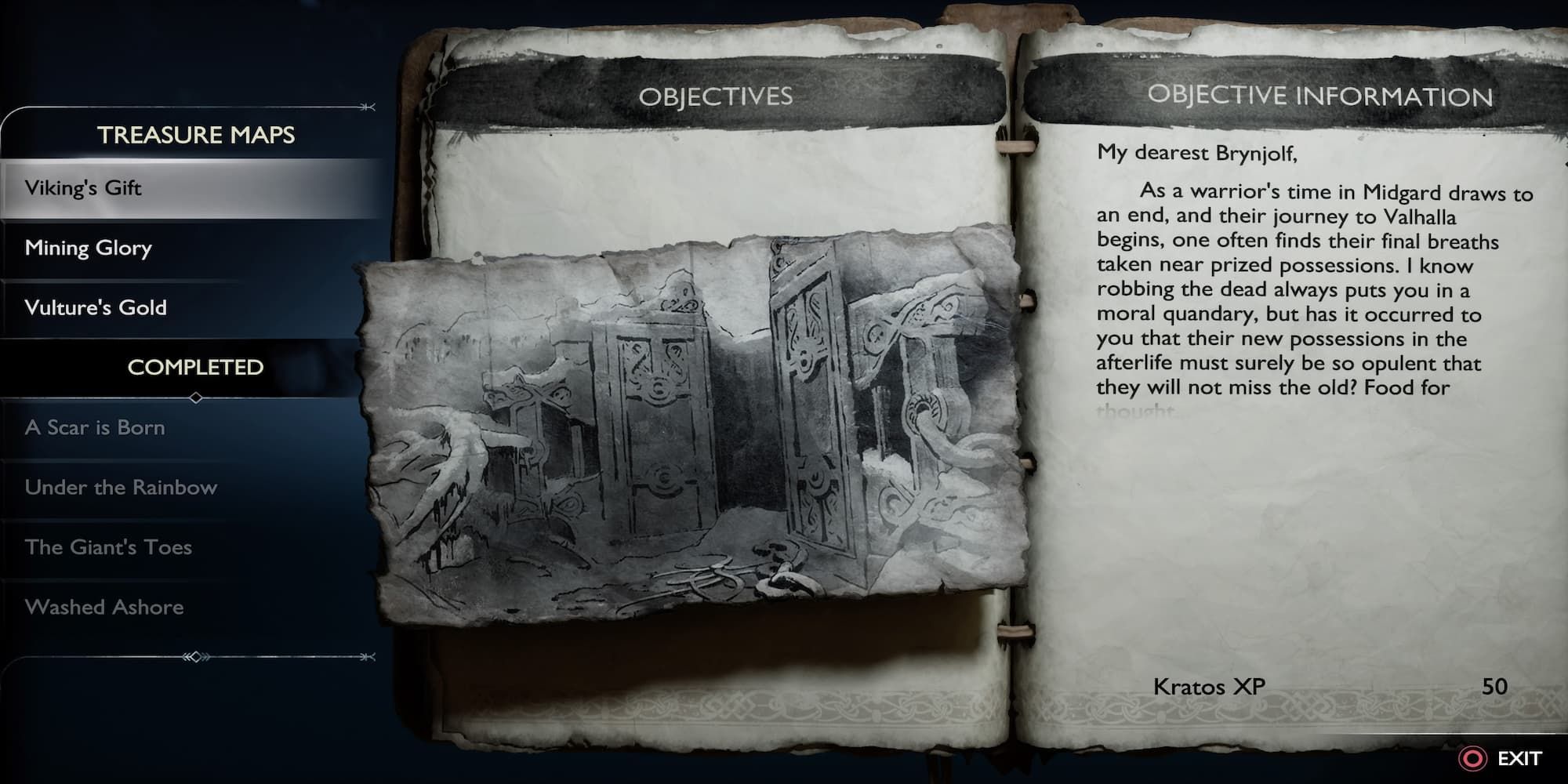 After returning to Midgard with Freya, Kratos is given more room to explore the frozen Lake Of Nine. Here is the Treasure Map located in this area.

While looking for the Norns in God Of War Ragnarok, Kratos, Freya, and Mimir find their way back to Midgard and open up the Lake of Nine for exploration. Much like the other realms, Fimbulwinter is affecting all aspects of the Midgard, and Kratos and Freya have their work cut out for them to bring peace back to the area.

Related: God Of War Ragnarok: All Stags of the Four Seasons Locations

Treasure maps can be fun little distractions from the main story or bigger favor missions and can be very rewarding. Completing treasure maps can give Kratos more crafting materials, along with amulet pieces to give him powerful buffs. The Viking’s Gift treasure is very simple, and should you be following other favors; it is located along paths you’ll already find yourself traveling down.

The map can be straightforward to locate but will take some fighting to obtain. Start from the Lake Of Nine Gateway and head south to the platformed area. This area is so close that playing the animation to get on the sled may take more time than just sprinting there. It is marked by smoke coming from the center, signifying a raider camp for the “Animal Instincts” favor and a few enemies to cut through with your powerful weapons.

Clear out the raiders in the camp to allow you to look around and interact with the loot from their camp. Head past the right side of the central pillar and head towards the boxes and makeshift tents, finding the treasure map right in front.

After picking up the map, the treasure will spawn on the other end of the Lake Of Nine. Get on the sled and begin heading East, past the temple of Tyr. If you follow the Animal Instinct’s favor, you’ll be heading towards another raider camp. Head towards the King’s Grave but take the path to the right instead of the left.

Taking the left path will lead you to the raider camp within the cave, but heading right will take you down a short path with a dead end. Heading down the right path, you’ll soon see a slight glowing gold aura along the back right corner of the small area you arrive at. Interact with the aura to dig up and collect the treasure.

Completing this treasure map will reward players will multiple consumables and an amulet piece. Players will receive 25 Shattered Runes, 1 Stonewood, 1 Dwarven Steel, 1 Honed Metal, and 50 XP for Kratos. You will also receive Midgard’s Justice, another piece in the Midgard set. This amulet piece will increase the damage to all ranged attacks and abilities based on Kratos’s cooldown stat. Focusing on a cooldown build can already be a very powerful build, and if that is your focus, this amulet piece is a necessity.