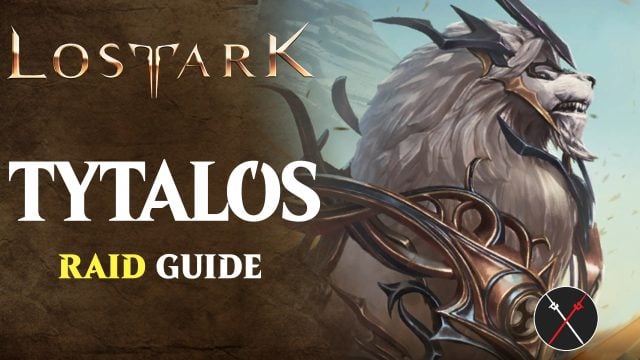 After honing your gear sufficiently, you’ll reach Item Level 580, which will allow you to fight the fourth Level 2 Guardian Raid boss in Lost Ark. Defeating Tytalos will continue to reward you with Legendary Accessories, a Legendary Ability Stone, and honing materials, to name a few.

For these types of activities, it’s important to allocate the right Tripods for your Skills. Since this Guardian is weak against fire, you’ll want to select Tripods that ought to change the element of your damage if possible. Doing so will significantly improve the amount of harm you inflict. Next, you’re going to want to equip HP Potions or those that restore a percentage of your HP since they’re the only ones allowed in Guardian Raids. Alongside this are Flares, which are essential to identify his location quickly to save time.

You should also remember to bring Panaceas. Even if Tytalos doesn’t have a large number of move sets unlike Flame Fox Yoho, he has crowd control abilities that will temporarily stagger you and lower your speed. What the Panacea will do is cleanse the respective debuffs and their stacks. Additionally, the fight against this Guardian spans 3 Stages, which is initiated the moment Tytalos digs underground and subsequently teleports to another area on the map. Note that in Stage 3, he won’t have any new skills. Instead, these will be upgraded to more powerful versions compared to the previous phases. 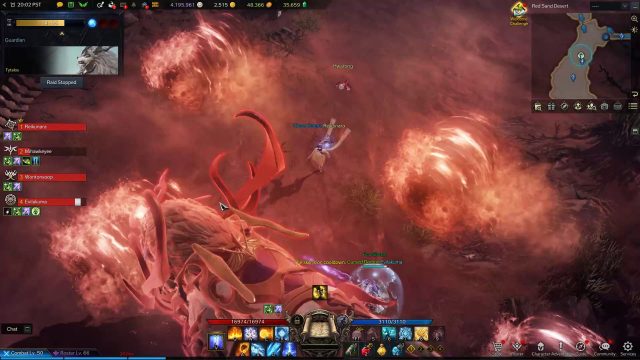 What makes Tytalos a force to be reckoned with even if he’s not as agile as Flame Fox Yoho is his one-shot mechanic known as Annihilation. Annihilation requires you and your allies to be familiar and precise in your movements because it can wipe out all of you, especially if the Advanced Class you’re playing is squishy. But before we get into this, let’s first talk about the Sandstorms and Earthquake Attack he’ll perform as prerequisites.

First, Tytalos will roar out into the open to summon 2 Sandstorms. These are initially stationary, however, they begin to gradually follow players around as time goes by. Remember that coinciding with or touching them will decrease your movement speed in addition to receiving some damage. This Boss will then perform 1-3 attacks prior to the Earthquake Skill. 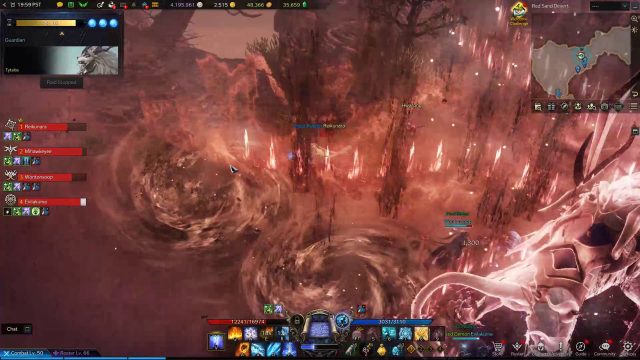 Second, when Tytalos raises his right paw and slams it into the ground, seismic plates will appear on the ground. He will also do the same for his left paw, and finally, a front body slam, each creating forceful strikes and multiple patterns. The 2 storms, which were summoned earlier, continue to exist. Note that the number of Earthquake Attacks this boss performs can be reduced to 1 or 2 depending on the skill’s animation.

Now you have to be cautious about the Earthquake Ability because more often than not, it’ll push Tytalos to perform Annihilation after 1-3 more attacks. For instance, he can decide to charge toward players, execute his Breath Attack, and then perform a Front Slam. The moment this Guardian stays in place near the 2 Sandstorms, the entire party will have to step inside of them. It’s better if the storms overlap so you can become petrified faster for 5 seconds which is equivalent to 3x worth of debuffs. This is also known as the Curse of Sand. 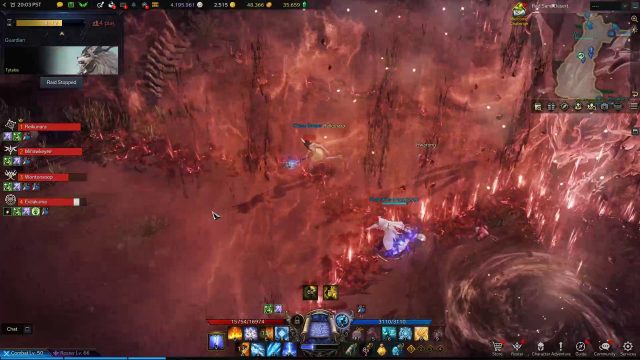 Doing so will guard and save you from the one-shot mechanic. Being ‘Invincible’ is also an indicator that you’ll survive Annihilation. If you miss the petrification debuff, you’ll take 90+% damage, effectively killing you if your HP isn’t full, to begin with. Remember to stay within the bounds of the storms until Tytalos unleashes his enraged attack in the form of Annihilation. This has a very wide range so moving slightly away from the boss could be fatal. 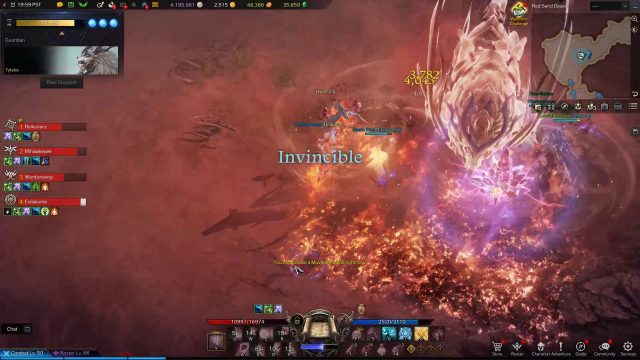 In the next sections of this guide, we’re going to discuss the attack patterns of Tytalos followed by his abilities per stage.

Similar to the majority of bosses, Tytalos will suddenly glow blue to charge at whoever is in front of him. Note that the period between changing colors and rushing forward happens in a split second so you have to be prepared to dash to the side to avoid the attack. Tytalos is aggressive and if you get crushed, you’ll be knocked down. If you manage to combat this move with a Counter Skill, he will be staggered, which would allow you and your allies to hit him hard for the time being. 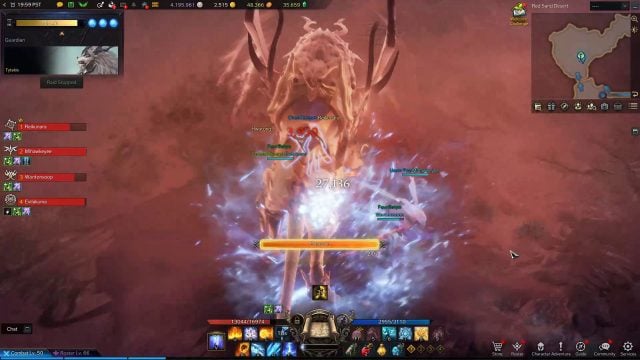 Additionally, this Guardian can also charge without glowing blue. At which point, no one from your team can use a Counter Skill to stop him. He’ll simply turn towards you, dig his claws into the ground, and quickly run forward to knock you down and deal low to moderate damage.

The moment Tytalos sits down on his hind legs to gather the energy surrounding him, he’s preparing to unleash his breath attack. Thankfully, this can easily be spotted because the skill’s trajectory resembles that of a straight line. If hit by the ability, you’ll be knocked back. When the Guardian begins to assemble sand particles around him, be prepared to run to his side to evade the breath attack entirely. 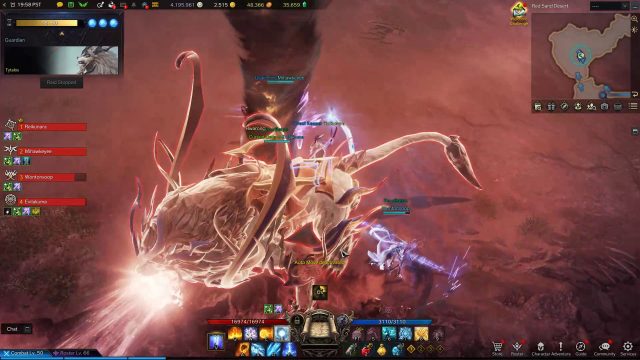 Tytalos can also stand on his hind legs to get ready to perform a massive front slam. As such, he crushes anyone in front of him while sending a strong shockwave in the form of a fan. Like how you’ve managed to evade his breath attack, you’ll simply need to run or dash to the side when he begins to stand up. 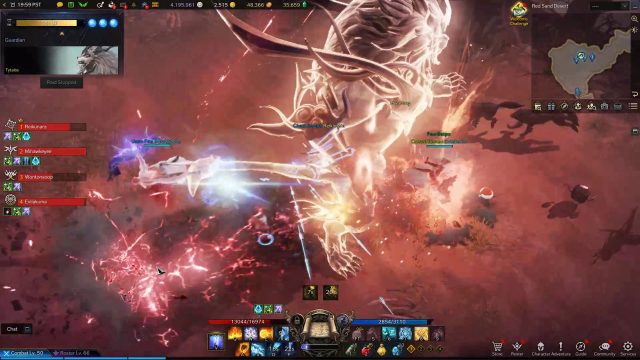 Just like Icy Legoros, Tytalos has the ability to retreat or evade your attacks and he does it in the same backward jump action. There are no tells as to when he plans to do this so when you’re in front of him, try to avoid using Holding or Casting Skills since there’s a high probability that you’ll end up wasting them. Instead, focus on activating Point or Normal Skills to instantly inflict damage.

One of the skills that Tytalos will perform in Stage 2 is the paw swipe and spin attack combo. Here, he lifts his right paw and strikes at whoever is in front of him, closely followed by a 360-degree spin to knock down anyone who’s nearby. Be sure to dash backward while maintaining at least a 1-inch distance between the two of you to avoid the combo attack entirely. 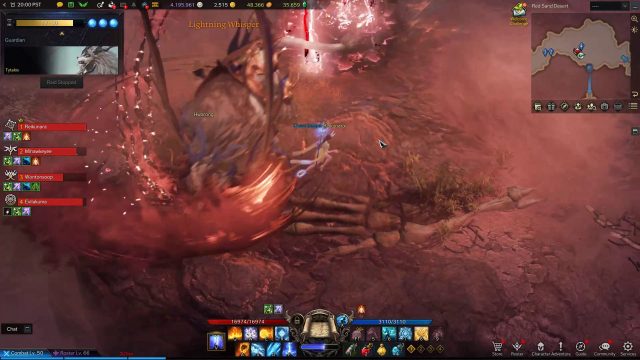 Similar to the Earthquake Ability, Tytalos will raise his right paw towards the sky, only to slam it into the ground, followed by his left paw, and finally, the anterior portion of his body. The difference, however, is that every time he does each of these actions, multiple red explosive rings will be telegraphed and subsequently detonated so you’ll have to quickly step away from them. 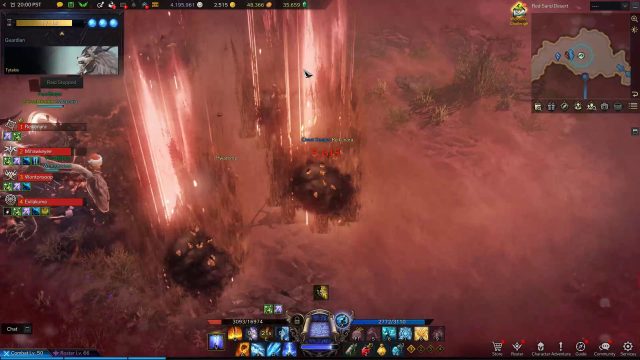 Explosive rings are very debilitating because not only do they inflict huge damage, but they can also keep knocking you up if the circles happen to spawn in the same area as where you’re at. So the best thing that you can do is to wait for the entire skill animation to end before attacking Tytalos once again. I would recommend simply running around instead of dashing because you might accidentally take explosive damage in the process.

When Tytalos sits on his hind legs and then proceeds to put his front paws down without slamming them into the ground, he’s preparing to conjure sand waves. These waves will come from different directions. There’s one that will spawn from cardinal points with respect to the boss and there’s another, which will come from behind Tytalos and then roll forward. 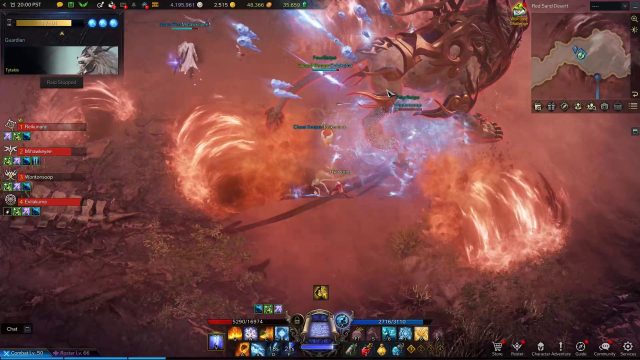 In both cases, they’re quite easy to avoid since the sand waves don’t come at you as fast and there’s adequate spacing between them.

Another skill that can be activated when Tytalos roars is the bomb spawns. Doing so will allow him to summon a yellow pulsating circle nearby, signaling that bombs are about to be conjured in a few seconds. Once present, the 2 bombs will trail behind the player closest to them. What can be done is to briefly touch it and then immediately dash away as they detonate. If you get caught in the explosion and you’re a squishy Class, your chances for survival would be slim so a support or tank character should do this instead. 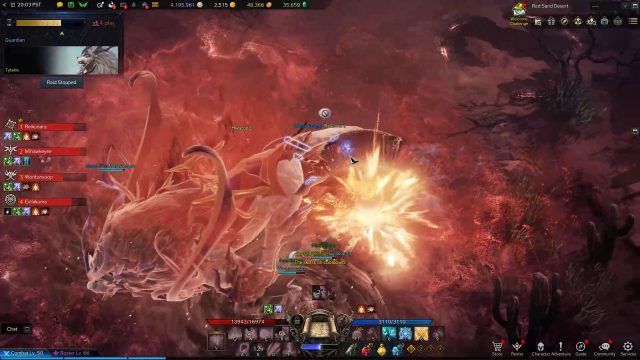 The last skill on Tytalos’ list is the rune circles ability, which will be summoned in two random spots. At first, they’ll appear as red projections on the ground and will then turn into full-blown rune circles shortly thereafter. If you accidentally step into either of them, you’ll get silenced for 6 seconds. But you’ll have the option to walk or dash away before this happens. 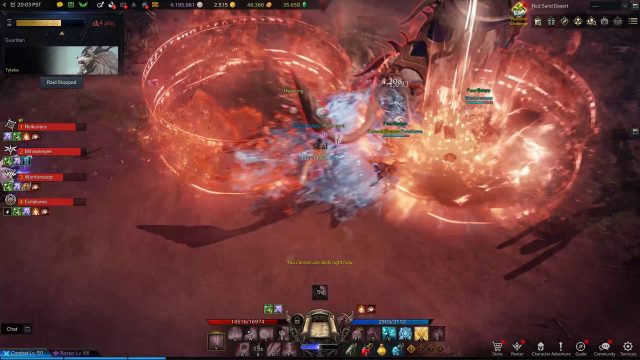 Tytalos can be a handful for some, especially if the Classes they play as are not as mobile. This is due to the boss’ debilitating crowd control abilities as well as his Annihilation one-shot mechanic skill. The technique to surviving this is to position yourself near the sandstorms after the Guardian performs his Earthquake Attack. He will then execute three more attacks.

Immediately following the 3rd ability, you should go inside the sandstorms. This ensures that you gain 3x the debuff stack to become petrified, which should help you survive Annihilation. If one of you dies, Tytalos will become enraged, thereby boosting his damage and attack speed, making him harder to put down. To counter this, make sure to use enough Stagger Skills as well as Whirlwind Bombs to impair him enough to return to his Normal state. 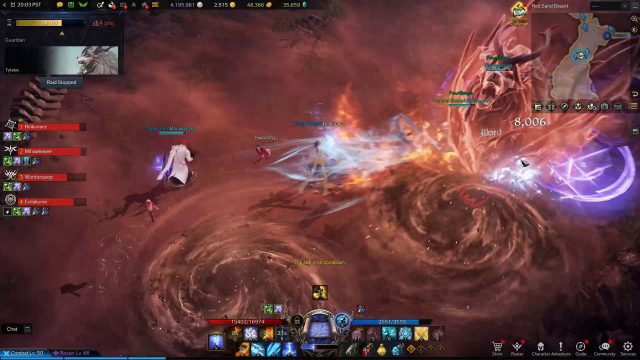 If you’re silenced or your movement speed goes down, don’t forget to use Panaceas to get rid of all of them since you’re going to need to move fast to evade the majority of this Guardian’s attacks. And lastly, whether you’re playing as a melee or ranged character, situate yourself next to Tytalos after performing a skill or two in order to manageably avoid his attacks.

Stay tuned for more Lost Ark Boss and Endgame Guides and be sure to check out our Lost Ark Wiki or drop by our Twitch Channel if you have questions about the game. You can also check out our recent endgame content including the Flame Fox Yoho and Vertus Boss Guides, Silver Farm Guide, Best Ways to Get More Skill Points, and Best Combat Engravings. We also have Build Guides for the Paladin, Scrapper, Gunslinger, Shadowhunter, and Gunlancer, to name a few. What did you think of this Lost Ark Tytalos Guardian Raid Boss Guide? Which bosses are giving you a hard time? Let us know in the comments below!

Agent Intercept is Spy Hunter for the Modern Age – GameSpew

Review: A Memoir Blue Does a Lot with a Little