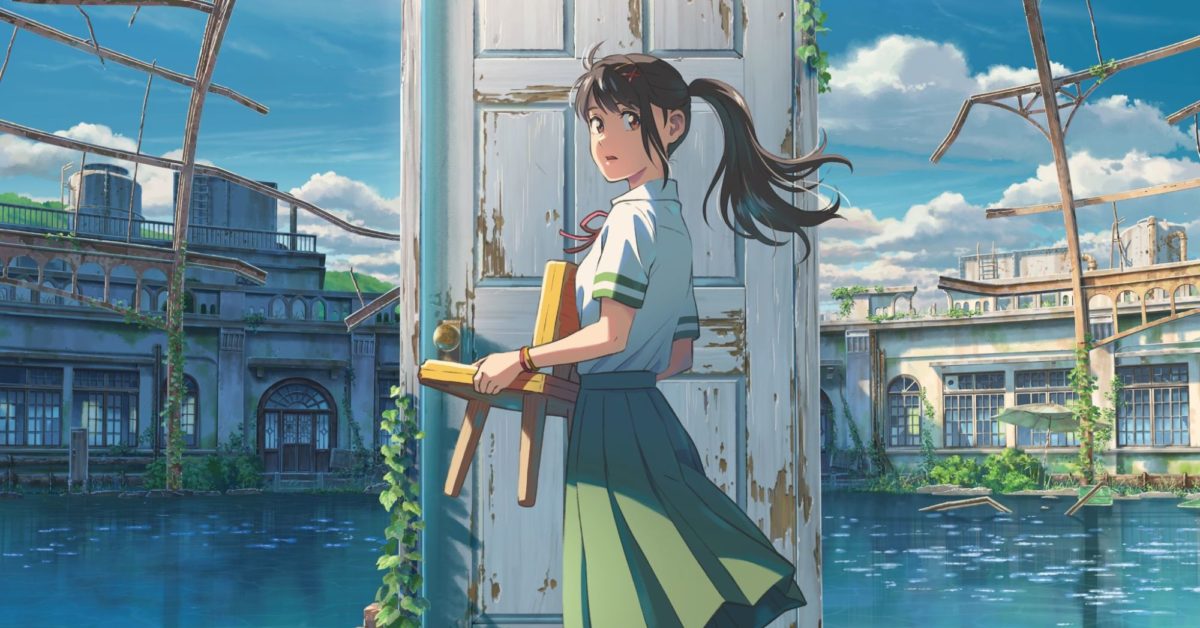 “17-year-old Suzume’s journey begins in a quiet town in Kyushu when she encounters a young man who tells her, “I’m looking for a door.” What Suzume finds is a single weathered door standing upright in the midst of ruins as though it was shielded from whatever catastrophe struck. Seemingly drawn by its power, Suzume reaches for the knob…

Doors begin to open one after another all across Japan, unleashing destruction upon any who are near. Souta is known as a “Closer” who travels across Japan locking these doors shut.

As the door opens, however, the mysterious white cat nicknamed “AristoCat” appears before them. “I love Suzume, but you [Souta] are in the way” as it uttered those words, Souta becomes Suzume’s childhood chair, she has cherished since she was little.

Souta chases the cat as a 3-legged chair, and Suzume sprints after Souta in a panic. Eventually, they will travel together from Kyushu to Shikoku, Kansai and Tokyo on their journey to close doors.

On her travels, Suzume encounters several people who help her as she helps them. But what awaited her at the end of her journey was a certain truth that has been long forgotten.

Guided by these mysterious doors, Suzume’s journey is about to begin.”

Joining Nanoka Hara as Suzume Iwato and Hokuto Matsumura as Souta Munakata will be leading Japanese actress Eri Fukatsu as Suzume’s aunt, Tamaki Iwato, who lives with Suzume as her guardian while working as a manager at a fishing company. Eri Fukatsu is known for her performance in Villain (Akunin, 2010), for which she won the Best Actress Award at the Montreal World Film Festival as well as the Japan Academy Prize for Outstanding Performance by an Actress in a Leading Role, and has most recently starred in the TV drama Come Come Everybody.

Joining her will be Kabuki actor Hakuo Matsumoto, who will be playing Souta’s grandfather, and Master Closer Hitsujiro Munakata, who is stern and cold but cares deeply for Souta. Hakuo has had a decorated career in other disciplines, including stage plays and TV dramas, most notably the Man of La Mancha stage play adaptation, which launched his career on the stage for over 50 years. Minoru Okabe, Tamaki’s fisherman colleague, will be voiced by Shota Sometani. Rumi Ninomiya, the bar hostess and single mother of two who Suzume encounters in Kobe, will be voiced by Sairi Ito. Chika Amabe, the energetic high school girl Suzume meets in Aichi, will be voiced by Kotone Hanase. And Suzume’s mother, Tsubame Iwato, will be voiced by Kana Hanazawa.

Eri said, “In spite of my lack of experience, Director Shinkai and the rest of the crew poured everything into this project, which will be reflected in the emotion delivered straight into the hearts of audiences around the world.” Hakuo added, “It was my first time playing a character in an anime film, and Director Shinkai did a wonderful job of guiding me through to the best performances. He was very friendly and kept a positive mood during production, for which I am very grateful.”