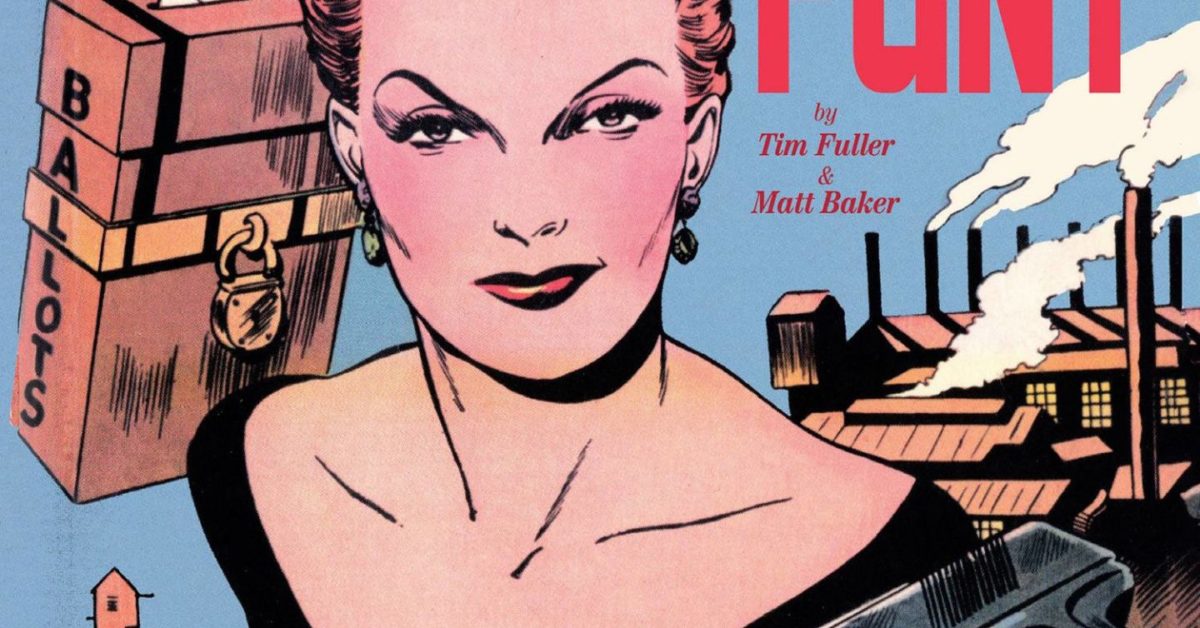 It’s Source Point Press time. It Rhymes With Lust is the first original American graphic novel in every definition that counts.  Written by the man who would go on to create Doom Patrol, Deadman and Guardians Of The Galaxy, Arnold Drake as well as Leslie Waller using the combined pseudonym Drake Waller, with black-and-white art by Matt Baker and Ray Osrin, it was a film-noir story of pulp, crime, politics and debauchery. Published by St. John Publications, it was incredibly ahead of its time.  And now it seems that it is the latest target of Tim Fuller. Who intends to take the comic and totally rewrite it for… more modern sensibilities?

Tim Fuller has previously done similar to other Golden Age Comics, defined as being in the public domain. Copyright got a bit freaky in the USA, where that art wasn’t correctly copyrighted before the seventies, and was considered public domain, such as Night Of The Living Dead. And it seems that It Rhymes With Lust may have fallen into that as well. It also seems to be It Rhymes With Lust’s year, as Matt Baker is commemorated in the current Marvel Comics continuity as the earliest gay African American man working as a comic book creator, while collectors pore over his early work.

Will any of this be reflected in It Rhymes With Funt? Maybe… it’s part of Source Point Press’ solciits and solicitations for February 2023.

IT RHYMES WITH FUNT TP (MR)
SOURCE POINT PRESS
DEC221659
(W) Tim Fuller (A / CA) Matt Baker, Ray Olsin
Bob Woodwork was the newly hired editor of The Daily Babbler, recently arrived from New York City and ready for a challenge. But he had not counted on that challenge involving an old flame from his troubled past. With the sudden death of Sabastian Funt, his widow was the richest woman in Mancave, Kentucky. She set aside her mourning to step into his shoes and make her presence felt. She would show this tiny tapioca mining town what real power looked like. They would come to fear the name Margo Funt. But behind her back, the towns people had another name for her… It Rhymes with Funt.
In Shops: Feb 22, 2023
SRP: 14.99

LITTLE RED RONIN #1 RONIN EDITION
SOURCE POINT PRESS
DEC221664
(W) Garrett Gunn (A / CA) Kit Wallis
This limited edition Japanese language collectible printing of Little Red Ronin #1 is re-formatted to match the layout of a traditional manga, and is fully translated into Japanese! The book features premium aged paper and a beautiful soft touch laminate cover treatment. A terrible beast has haunted the citizens of Poletown for decades. Although the monster hasn’t been seen in years, disappearances and gruesome killings still plague the townsfolk. Determined to clear her family name, Red hunts The Great Wolf in hopes of exonerating her grandmother, who lives in exile for spreading terrifying propaganda.
In Shops: Feb 15, 2023
SRP: 9.99

LEGION OF DARKNESS FOURTH EAGLE (MR)
SOURCE POINT PRESS
DEC221657
(W) Chrill (A / CA) Chrill
Three outcast warriors venture into the forest of Teutoburg, the scene
of one of the greatest Roman military defeats, to return a coin to the ghosts of the
soldiers who fell in that battle.
In Shops: Feb 15, 2023
SRP: 3.99

ADVENTURES OF CTHULHU JR AND FRIENDS TP
SOURCE POINT PRESS
DEC221658
(W) Dirk Manning (A / CA) Scoot McMahon
When a wannabe supervillain is charged with capturing the son of Cthulhu
(who just happened to move in across the street for the summer) in order to be admitted
into the League of E.V.I.L., hilarity, hijinks, and horror ensues! Both adults and kids
alike will find a lot to enjoy in this original graphic novel hailed as “A great comic for
all ages!” by Sci-Fi and Scary!
In Shops: Feb 22, 2023
SRP: 19.99

ZOMBICIDE DAY ONE #2 (OF 4) CVR A RIZZATO (MR)
SOURCE POINT PRESS
DEC221662
DEC221663 – ZOMBICIDE DAY ONE #2 (OF 4) CVR B RIZZATO (MR) – 3.99
(W) Luca Enoch, Stefano Vietti (A) Alessio Moroni, Marco Itri (CA) Francesco Rizzato
Ned, Diana, Wanda, and Julio take shelter in an auto shop with a
legion of the undead at their heels! Julio reveals his tragic backstory while the
group searches for supplies. They move at dawn!
Based on the critically acclaimed board game.
In Shops: Feb 15, 2023
SRP: 3.99

How The Menu connects to Succession and Game of Thrones