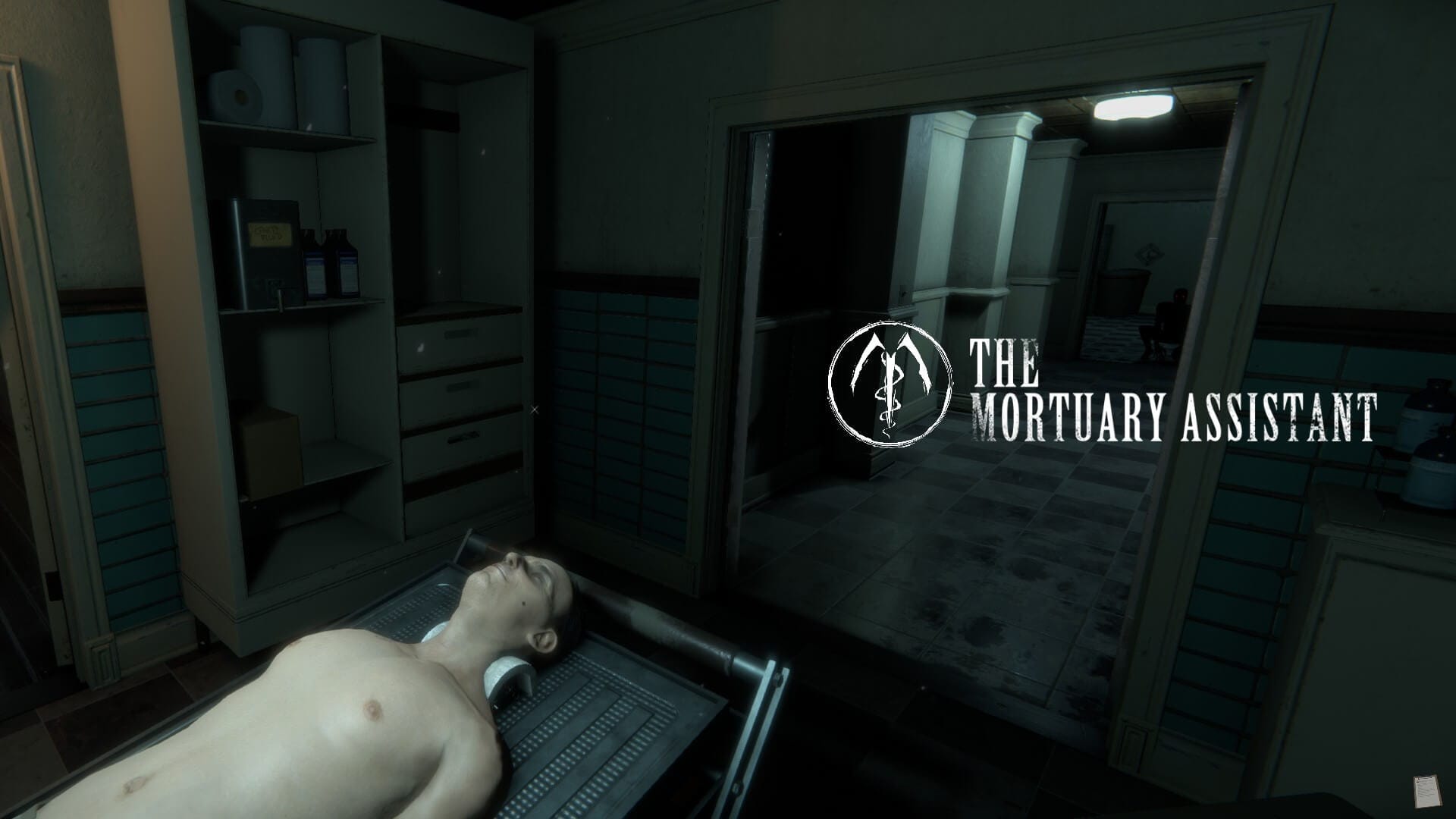 I won’t mince words – The Mortuary Assistant scared the absolute daylights out of me, and I’m very lucky I didn’t have nightmares when I fell asleep right after playing. The game opens with a warning that the gameplay depicts actual reported paranormal experiences and to contact a church or paranormal investigators if players notice abnormal events or a drastic change in behavior from themselves or others. I was already nervous going into The Mortuary Assistant, but the beginning message really helped that fear settle into my bones.

Gameplay consists of visiting the morgue or returning home to Rebecca’s apartment, which gives players the opportunity to explore both locations and find hidden items. The Mortuary Assistant opens with a conversation between the main character, Rebecca Owens, talking with her grandmother about how she secured an internship at a mortuary. Her grandmother is (rightfully) worried about the paranormal happenings she’d heard about at the morgue, but Rebecca seems passionate about her career in embalming. Things seem alright with Rebecca’s embalming skills until the end of the tutorial, in which case she is dismissed by her mentor. However, she later gets a call to come into work that very same night and her mentor explains what’s going on.

Through some otherworldly power, Rebecca now has a demon attached to her and must learn its name to banish it. The banishment process is explained through cassette tapes and players get to be both mortuary assistant and supernatural hunter thanks to the tools left to help Rebecca stop the demon. Rebecca’s embalming experiences go from creepy to downright terrifying as the night goes on and players race against the clock to prevent the demon from overtaking Rebecca by identifying its vessel body and learning its name. For how scary the game can get, there’s also a humorous element that can give players brief reprieve from the horror. Some of the viewable items in her apartment are food, and each cereal box has a description that earned a chuckle from me.

The first night I stayed in the mortuary to embalm 3 bodies, it was storming outside and greatly heightened my sense of fear between the booms of the thunder and inexplicable supernatural happenings. There was one tiny glitch – I opened and closed the back door during the rain and accidentally made it rain inside – but the issue resolved when I walked to the front door and the game seemed to reset itself.

In addition to the weather creating a foreboding atmosphere, the layout and exploration of the morgue will also keep players on their toes. The hallways connecting the lobby to the embalming room and the embalming room to the body storage and incinerator make it so players feel like there’s something lurking just beyond. Sometimes, if you look quick enough, you’ll see it too.

Mechanically speaking, one of the coolest and grossest sequences is the actual embalming of the bodies. Also, there’s a bit of body diversity in the bodies that can be tended to, with different skin tones and body types found on the gurney, which is a nice, thoughtful inclusion to the game. There are a few different steps players must execute to properly embalm and store a body, complete with realistic incisions and gut-churning sound effects. Once the initial shock wears off, it’s pretty easy to follow the routine of embalming – what makes it difficult is the demon messing with Rebecca’s head.

There are three signs that signal the approach of a spirit. First, the lights will flicker on and off. Next, the phone will ring and there will be nobody there. And finally – wait, wrong spirit, we’re not talking about the Hash-Slinging Slasher. In fact, the demonic entities in The Mortuary Assistant are quite real and incredibly terrifying. While the lights will actually flicker, bodies can also become possessed and move or talk, things will lurk around every corner, and aggressive random knocks on doors or windows can easily make you jump.

One of the most appealing parts of The Mortuary Assistant is its attention to detail and 5 possible endings. Players must be observant of the minor scares as well as the major ones in order to banish the correct demon – if not, the consequences can be disastrous. The scares during each shift in the morgue change, but none of them feel forced or cheap. It’s a slow build that really did scare the pants off of me, especially during my first playthrough. Additionally, each playthrough will bring you closer to learning more about Rebecca’s past and give some insight into the history of the mortuary.

As knock-out as The Mortuary Assistant is, there were some issues that arose. The mechanic of pulling and pushing the gurney with the body down the hall is fine and works to add some suspense, but it was a bit complicated and frustrating to have to physically pull the rack out of the wall to get or return a body to its compartment. It would have been more intuitive to have players click once and have the shelf roll in or out, and have kept the physical movements of the mouse to the embalming actions instead.

While the game has readable subtitles that appear when characters are speaking, there weren’t any for some of the possessed dialogue, like when the demon is talking through a body or when Rebecca hears someone say something in an empty room. I always rely on subtitles, so it was a bit disappointing to not catch all of the creepy lines and threats.

The Mortuary Assistant was built using the Unity engine, which makes for impressively terrifying visuals when it’s time to be scared. However, the facial animations during conversations with the living tended to look a little stiff or too fast compared to the words being spoken. This doesn’t mess with the game experience too much, as conversations between people are minimal when working in the morgue, but it was a bit jarring to see the first time it happened.

The only other problems that made themselves known during my time with The Mortuary Assistant were all minor glitches or things that didn’t impact gameplay overall. For example, the word “match” is misspelled as “mathc” at one point, the word “jumbled” appears as “jumpled,” and the cast list in the credits overlaps so no names are visible, but these issues could easily be fixed.

Overall, The Mortuary Assistant will keep you on the edge of your seat and, because of its about 5-hour play time, makes it easy to return to and play more shifts to learn about Rebecca, the demons, and the history of the morgue. If you have what it takes to brave the morgue and expel some demons by solving logic puzzles and embalming correctly, The Mortuary Assistant is the game for you.

TechRaptor reviewed The Mortuary Assistant on PC with a copy provided by the developer/publisher.

Disclaimer: Our reviews editor, Sam Guglielmo, works at publisher Dread XP but did not edit or view this piece prior to publication.

‘Crypt of the NecroDancer’ getting “super secret announcement” this week

Bullet Train Reviews Are In, See What Critics Are Saying About The Brad Pitt Action Comedy

Day Shift review: Netflix’s vampire movie has some of the year’s best action