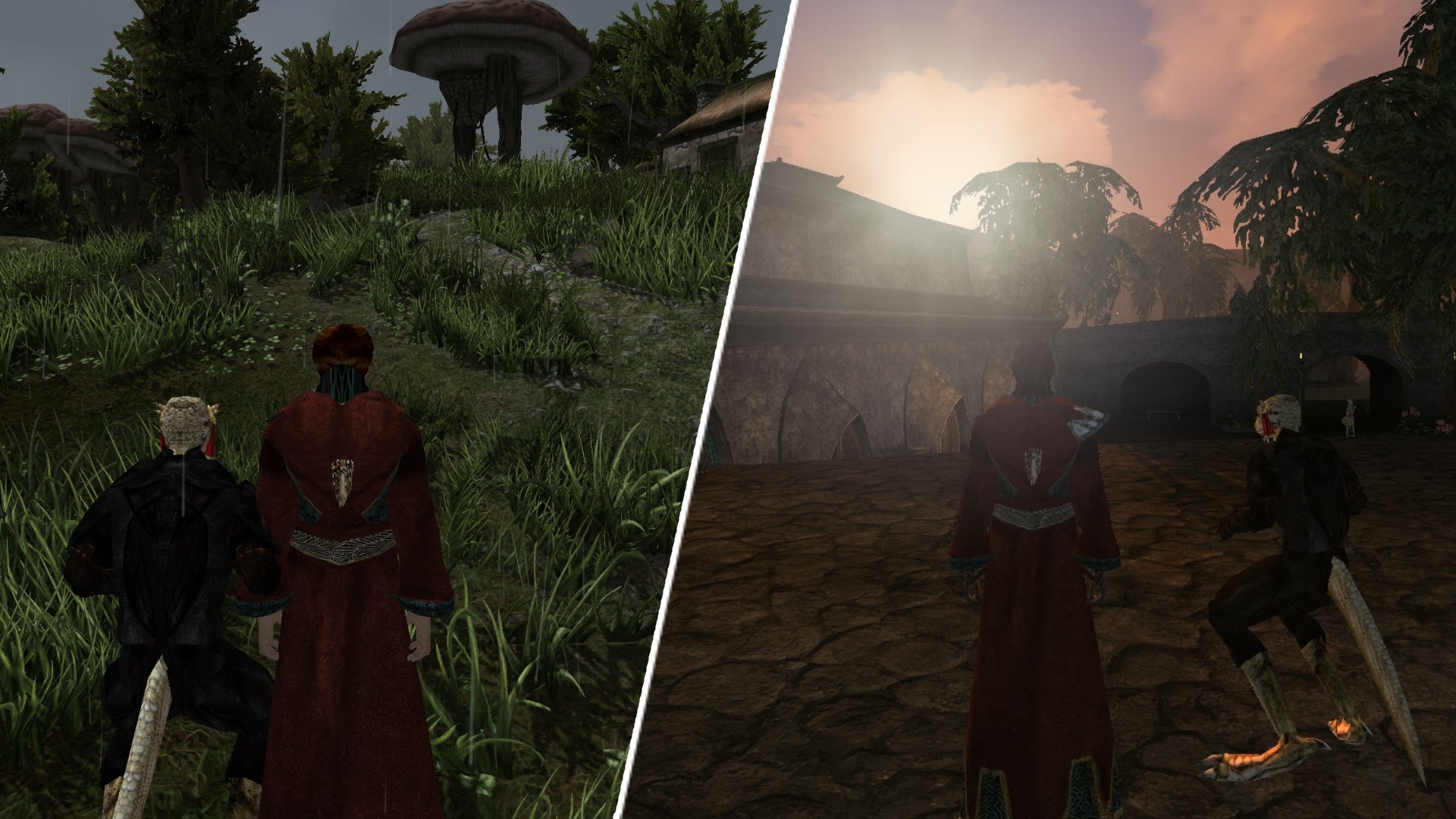 I, Breton sorcerer Vidal von Astral, watch over my partner – an Argonian assassin going by ‘Lizzy’ – as she sneaks downstairs into the wine cellar of a bustling tavern. I say ‘sneak,’ but really the archaic-yet-endearing Morrowind animation system and digitigrade structure of her lizardy legs means that she’s slowly bounding like a Saturday morning cartoon character who’s trying to telegraph to the viewer that they’re up to something devious. The guards seem confused, watching her go down and around the corner and yet not committing to following her – perhaps there’s more deceit to this comical Argonian stealth than meets the non-NPC eye.

Then, one of the guards makes a move, and starts to stride in that unmistakably Morrowind way down the stairs; I give my partner the signal to wrap up her raid on the Cyrodillic Wine and get out of there. She escapes but – kleptomaniac that she is – can’t resist nosing in a sack on her way out, which the guard duly walks in on. We’re forced to flee, immediately becoming fugitives in the crossroads town of Pelagiad. It’s the first twist in our freewheeling co-op adventure in Morrowind, and it feels great to do these traditional Bethesda RPG shenanigans together.

The classic 2002 RPG Morrowind was, like every mainline Elder Scrolls entry, never designed for multiplayer, but thanks to the wonders of OpenMW – an open-source recreation of the Morrowind engine – and TES3MP, a project that adds servers and networking features to OpenMW, you can now enjoy it as a near-seamless co-op game. Rudimentary though it is in places, it still showcases how fully integrated co-op could be a star feature in The Elder Scrolls 6 (whenever that may come), and one of the most important evolutions in the series’ history.

And before someone points out that The Elder Scrolls Online is a thing, I’ll preemptively retort that there’s no comparison between the intimacy of exploring a world with a band of friends and the noisiness of a congested MMO. I don’t want to enter caves and mines to find trails of monsters already slain by the previous player, I don’t want perpetual (yet weirdly frictionless) grind, and I don’t want text boxes filled with acronyms and ‘LFGs’ and sellers.

Sure, the idea of a fantasy city bustling with other players sounds great, but the reality is that those players aren’t sitting in taverns, chatting with fantasy accents about in-world events, getting into bar fights or fishing in the canals – they’re all just bottlenecking to talk to the same quest-givers and merchants as you. I’ve tried to convince myself that The Elder Scrolls Online is my dream game, but not even the nostalgia-filled Morrowind expansion from a few years back felt like a safe, sanitised tourist tour rather than the game I know and love.

Playing Morrowind in multiplayer scratches an itch I’ve had ever since I first got off the boat in Seyda Neen and explored the surrounding swamps, some 20-odd years ago. There’s jank aplenty: enemies will get fixated on attacking one player even while the other one’s battering them, and the real-time but RNG-based combat system is comically outdated (though, like most things, fixable with a mod). There’s a rustic kind of charm to all this, and beyond that it shows the potential of co-op within the Bethesda RPG framework.

Being a heavily systems-driven – and legendarily buggy – series, The Elder Scrolls has always been a great story generator; we all have tales of that time when we punched a guard in Oblivion to set off a chain of events leading to a town-wide brawl; or when in Morrowind we used the Scroll of Icarian Flight to leap straight to the endgame mountain; or when a giant clubbed us so hard in Skyrim that our ragdolling corpse was sent flying into the stratosphere. These games are potent potions of spontaneity and inevitable bugginess, which makes for an infinitely shareable experience – just look at how, after all these years, Oblivion and Skyrim remain limitless sources for YouTube content, Let’s Plays, and meme material. In a series defined by ‘you won’t believe what happened to me’ moments, having someone right there with you for them is the logical next step.

Morrowind’s (and the whole series’) flow between stealth, action, skill-building and roleplaying makes for pleasingly flexible pacing, catering for all kinds of co-op sessions – from 20-minute dungeon delves to idling around town to shore up your enchanting, or half-day expeditions into the wilderness Vvardenfell. My partner and I would often drift off in separate directions – me investigating Dark Brotherhood disturbances in Mournhold, she honing her lockpicking skills on peoples’ homes in Balmora – before reuniting once I’d uncovered the whereabouts of the Brotherhood base. We’re almost like AI companions for each other (albeit with slightly better banter than Skyrim’s Lydia), our personal stories and missions interweaving while still feeling separate. Of course, we could just stick together the whole time like a traditional RPG party, but the beauty of Elder Scrolls’ openness is that it very much feels like a choice.

The Elder Scrolls has of course been a pioneer of the ‘big solo open-world’ game, but as something of a template-setter it’s sometimes been reluctant to build out from that. In the buildup to Skyrim’s 2011 release, for instance, some of the most lauded features were dual-wielding and dragon battles – fun stuff for sure, but there was a sense that beyond a change in setting and spruced-up graphics not that much had really evolved since Oblivion, or even Morrowind (I still feel that the latter stands supreme with its world-building, story and old-school design free of map markers and handholding).

A lot has changed in the gaming world since Skyrim. The Witcher 3 raised the bar pretty much across the board, while a revival of more traditional-style cRPGs like like Wasteland 3, Divinity: Original Sin 2, and, (most recently) Solasta: Crown of the Magister, has given rise to fully integrated co-op, making a once-radical concept of playing alongside a friend suddenly seem not only viable, but the best way to play an deep RPG.

Much like Morrowind’s multiplayer, these games don’t just tag on extra players, but give all players equal autonomy in the world. Naturally, they go a bit deeper than the admirable but relatively minimal efforts of TES3MP, creating rich roleplaying scenarios where, say, two player-characters might disagree over whether to kill or free a captured enemy, or (in Divinity’s case) squabble over who will ascend to godhood. These situations help develop characters from the blank slates they start as, create playful friction and divergence, and complicate big decisions in the best possible way.

Well-designed co-op RPGs give rise to precisely the kind of characterisation that Elder Scrolls has always been lacking, which could be both the making of the next Elder Scrolls and its greatest challenge. For a series that’s always put you in the role of a silent protagonist who answers by prompts simply to keep NPCs talking, throwing another player (or several) into the mix will force Bethesda to flex their writing and roleplaying chops in a way they’re not really used to.

On the other hand, the adventures of Vidal von Astral and Lizzy through Vvardenfell are a proof of concept that The Elder Scrolls 6 could flourish as a co-op game, inspiring a new kind of RPG play that takes cues from elements of Original Sin 2, but holds onto what makes Bethesda games special. Where those cRPG-style games are quite pointedly party-based and story-led, it would be more in line with the Elder Scrolls philosophy if players could dictate the degree to which they want to be involved in each others’ adventures despite sharing the same rich world. The combined lessons from the somewhat shambolic Fallout 76 and the excellent TES3MP are that Bethesda really doesn’t need to deviate from its single-player RPG structure to accommodate co-operative play.

Co-op RPGs are on the rise, and countless modder hours have been spent trying to integrate such features into Elder Scrolls (let’s not even get started on Skyrim Together, the costly and all but failed attempt to add co-op to Skyrim). In a series that’s so often thrived alongside its modding communities, Bethesda need only look to the incredible efforts of TES3MP for that next big feature that would help The Elder Scrolls 6 prosper in an RPG landscape that’s much richer than when the series last surfaced.