So, sadly we know that Total War: Warhammer III has been delayed. I’m not surprised; even now, there are games finally showing the delaying factors of home working, transferring to that, and getting used to it. Total War: Warhammer III would never be omitted from this, with a game such as this and all the moving pieces making it more of a candidate for delay than any other type of game in the world. There’s just more going on. 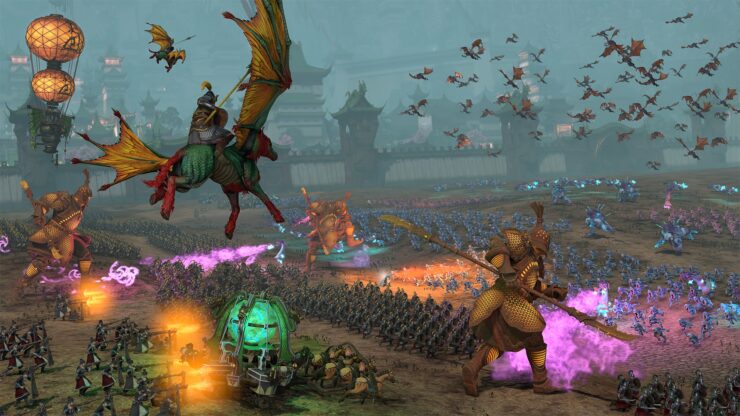 So who are the Grand Cathay? Coming from the east of the world, they are inspired by the Rapa Nui, using giant statues to fortify their locations – preferably islands – and then using magic to bring these statues to life to assault the enemy. Or China may have been an inspiration. I couldn’t imagine why anybody would think that, though, what with the symbol of the Cathay being a jade dragon.

Random ramblings aside, the Cathay coming to Total War: Warhammer III is something we knew about due to the location and earlier announcement. How they play should be the interesting aspect, with the two lords now having been revealed:

Miao Ying, the Storm Dragon, rules over Northern Cathay and commands the armies of the Great Bastion. Cold and aloof, she has ruled over the northern provinces for centuries after its defense was entrusted to her by her father, the Celestial Dragon Emperor.

Zhao Ming, the Iron Dragon, rules over Western Cathay and the Sky Road that leads into the Mountains of Mourn. A hardened frontier warrior, the Iron Dragon maintains the western edge of the empire and keeps the desert clans in order, even as the other Dragons question the sanity of their brother.

As for how the faction will play. Well, I’ll just let Creative Assembly explain it:

If Cathay could be described in a single word, it would be ‘harmony’. The Dragons of Cathay, and by extension their armies, are creatures of order, who seek balance in all things – including how they wage war.

Whilst the armies of the Dragon Emperor are defensive in nature and built to stand their ground and grind the enemy down through determined defense and firepower, ensuring they fight as a single & efficient organism is the most vital element of their war effort. The longer their armies can maintain this harmony upon the battlefield, the greater the bonuses they are able to unlock.

This sounds very much like my sort of playstyle. I’ve always been a “slow and steady wins the race”, organise and consolidate, let the enemy crash upon my walls sort of person. The inclusion of big arse dragons does help. What of the rest of the army?

As one of the most technologically sophisticated nations in The Old World, the Cathayan war-machine can call upon a myriad of the most ruthless and deadly units in existence. The core of the army is constructed around expert troops such as the unyielding Jade Warriors and the elite Celestial Dragon Guard, whilst devastating support can be provided by titanic Terracotta Sentinels, the masterfully crafted Wu-Xing War Compass and the ethereal Great-Jade Longma Riders.

Should You Play New World? First Impressions From The Frontier

New Overwatch Deathmatch Map Is Now Live On All Platforms

Astria Ascending’s Beauty Is Only Skin-Deep

The Witcher Gets a Third Netflix Season, Another Anime, and…

Horror Fans Are Discussing One Of The Most “Mentally…

How To Watch The Conjuring Movies In Order