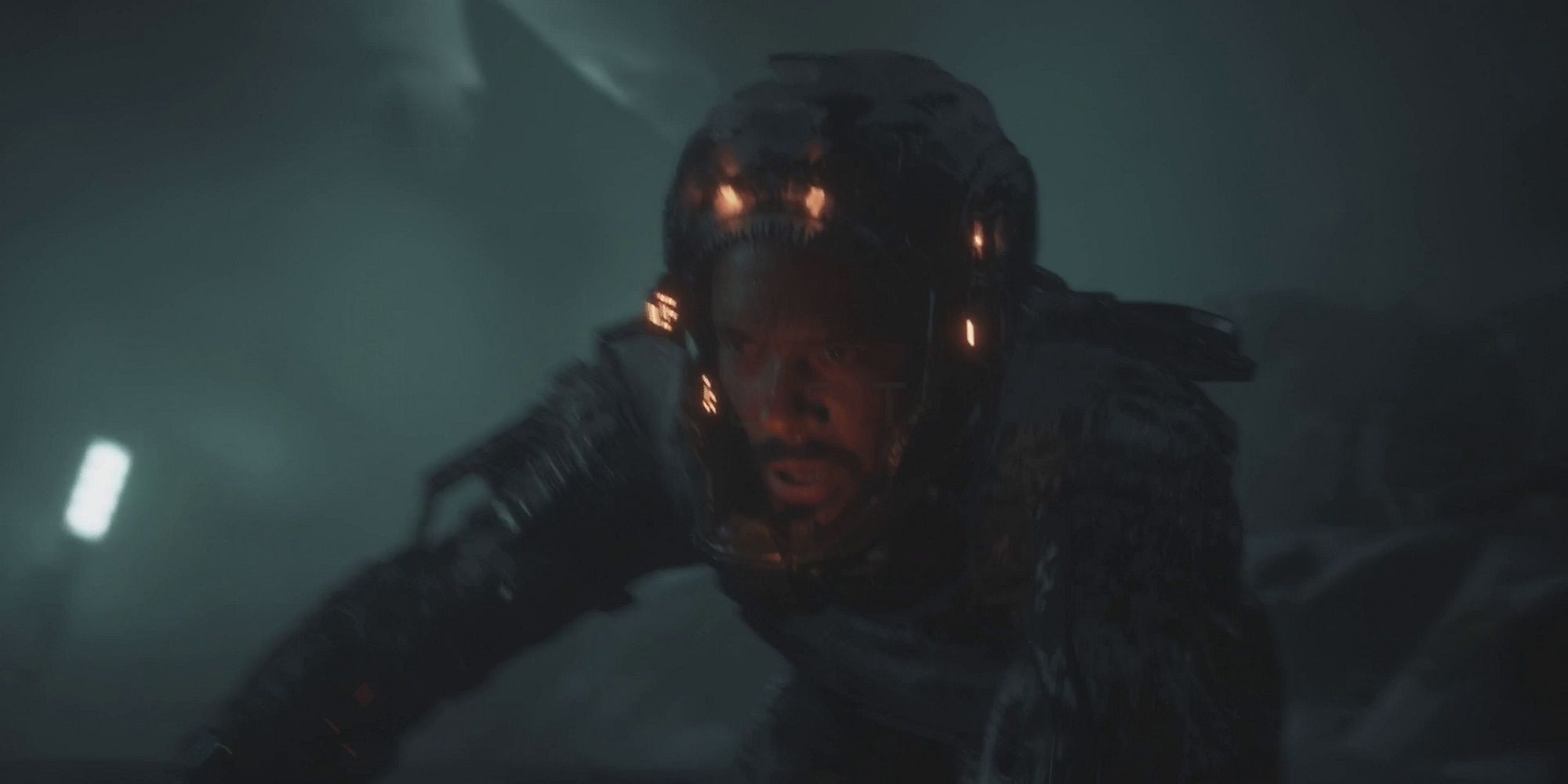 Disclaimer: Copy was provided by the developer for review purposes.

In gaming’s far-flung past of the 90s and 00s, there used to be far more regular misfires that truly astonish you at every level. They weren’t like the messes of today with glitches and performance issues – no, these games were on another level. Titus’ Superman 64 and Robocop. Anything by Cryo Interactive after their Dune game. These games certainly functioned, but their design was so impressively broken at a fundamental level that entertainment had to be drawn from the gristle and bone marrow buried so deep that you questioned the point of the exercise.

And now we can add Striking Distance’s The Callisto Protocol to that illustrious list.

I’m not even sure Callisto Protocol knows what it wants to be. Is it a brawler? A shooter? A spooky horror game? Action-packed? Stealthy? A Dead Space successor? A project that stands on its own? It tries for all of these things, only to provide them in their worst forms possible. Yes, sadly, all the bad things you’ve heard are correct: Callisto Protocol is the first real AAA failure of the 9th console generation, and my word does it do so with style – like a diver making every necessary preparation, except making sure the pool they’re leaping into has any water in it.

Make no mistake, Callisto Protocol is a dry, empty, confused husk of a game despite everything going for it: multiple creative leads from Dead Space given seemingly near-total creative freedom thanks to the funding of the publisher of PUBG and a brand-new wave of consoles with untapped potential. With all in its favor, how did we end up with what plays like a poorly planned PS1 game made in six months?

It’s legitimately amazing how little story there is that doesn’t constitute a spoiler, because the vast majority of Callisto Protocol is nothing but a void of creeping through similar hallways and bitter, darkened rock quarries. What I can say without spoiling is that everyone outside of the protagonist, Jacob Lee, is infinitely more interesting than what he brings to the story. Considering in particular that co-star Dani Nakamura, played by The Boys’ Karen Fukuhara, has actual backstory, personal drive, and a reason to be imprisoned at Black Iron Prison, you’re constantly left wondering why Jacob Lee is here.

Even as bland protagonists go, Jacob is a gaping hole where charisma dies, and it’s hard to tell if that’s on voice actor Josh Duhamel or his mocap animations. There are definitely a few scenes where his animations appear to be unfinished, such as facially responding to a spinal surgery like one might to stubbing their toe particularly hard. By contrast, Day Gone’s Sam Witwer co-stars as the main antagonist prison guard with so much more charm that you almost end up rooting for him instead of Jacob.

Nowhere is this lack of focused priorities more evident than with the combat. Shooting is perfectly serviceable, with some neat high-end perks for your guns that you’ll likely never see unless you specialize or wait for the New Game Plus update in 2023 (yes, really, they launched without it). Yet shooting only takes center stage later, giving way to the real star of the show: melee combat. It mixes Punch-Out!’s dodging mechanics with Arkham brawling presented with a camera more firmly jammed into its protagonist’s spine than God of War on PS4. Players also receive a truncated version of Dead Space’s telekinesis, now working more like a Force Grip from Star Wars: The Force Unleashed, but with such a low battery capacity that you’ll rarely use as much as you’d like to. Granted, its propensity for grabbing random crates instead of the giant charging monstrosities ahead of you doesn’t help. You can be staring directly at an explosive or enemy, and it’ll go for the furthest refuse instead.

There were more than a few fights that looked impressive in hindsight, but I was just wildly button mashing and abusing the poorly implemented dodge system as the combat barely clung to coherence. Dodging left and right with your analogue stick instead of using a dedicated button rarely works as you intended, made worse by the camera swinging wildly when it decides to focus on another opponent. It says something that dodging was barely spoken of before release, because it feels awkward at the best of times. There’s no real strategy at play – enemies are always faster than you, necessitating you either be extremely lucky, abuse every resource in a risky gamble, or just waggle your left analog stick.

It’s amazing how unfrightening the journey is, relying so heavily on protracted on gory death animations that take forever.

Exploration is next to nonexistent due to how linear every level is, but player progression is a rare highlight; there really is some wild stuff to unlock, but you have to know it’s there, so you don’t waste the points on, say, making your stun baton 50% better at blocking, rather than seeking shotgun shells. Still, it’s by far the most satisfying part of the gameplay to engage in, with a nifty circular menu and excellent 3D printing animations.

Many of the ideas present in Callisto aren’t necessarily in isolation. Any of these design choices could’ve worked, just not in this exact combination. Instead, you’re caught in a perfect storm of a game that’s actively built not to scare you, but instead grind you into the dirt no matter what difficulty you’re on. What good does having multiple healing kits do you if Jacob has to sit down and stare at the needle like it’s the first time he’s ever seen one before? He does this no matter how far into the game you are, even while a horde of “Biophage” infected charge at you from every angle. Just stick it in! Striking Distance seems to have realized this wasn’t ideal, as enemies may randomly drop a bit of health you can just use, but there’s no explanation for why Jacob can’t just do this all the time.

This clunkiness extends to the entire UI. You can’t listen to audio diaries while walking, navigating the inventory menus is needlessly stiff, and swapping your arsenal is overcomplicated by a refusal to use all four D-Pad buttons like most games would for quick-select. Instead, everything has to be awkward, fighting against you in ways that merely add aggravation, not meaningful tension.

ALSO READ: The Death Of Scavengers Shows You Need Identity To Survive

To be fair, the music is solid and the sound design, if overly dramatic at times, works well. The biggest hurdle Callisto Protocol stumbles over is far more unavoidable – the art direction. Callisto Protocol absolutely has the fidelity of a major AAA release, but despite that, there’s nothing distinctive here, from obviously copy-pasted assets that don’t fit certain settings to almost every enemy type being some variant on “gross zombie covered in pimples”. There’s also a repeated jump scare with one character model so contrived that, as I played, a member of my family watching alongside me replied in deadpan “Hey, do you think that was a jumpscare?” It’s amazing how unfrightening the journey is, relying so heavily on protracted on gory death animations that take forever. These deaths aren’t scary or inventive, but just gross – maybe the creative ones are waiting as DLC, which is a whole other kettle of fish.

As tiresome as it is to compare, there’s nowhere near the ambition with these Biophage zombies as there was with Dead Space’s Necromorphs. Most variants end up not fighting all that differently other than spitting or taking a bit more damage. Of the two Biophage that are memorable, one is hilariously easy to kill by any means, while the other is so frustrating to fight that they’re essentially a miniboss despite being presented as a normal enemy.

As for actual boss fights, there are only two to speak of, one of which is just a tutorial for the latter fight at the end of the game. Neither is fun to engage in, especially as the final fight strangely tosses aside most of the core gameplay elements for something ripped straight from Resident Evil. This speaks to the central issue with The Callisto Protocol – there is no core thesis to it all. Every time it can, it grasps at ideas you already saw executed better in other franchises. As the final threads try to tie off just enough for not one but two cliffhangers, you realize that none of it really meant anything either.

Jacob barely has an arc, Dani only slightly more so. A last-minute attempt to throw ambiguity to Jacob’s actions lands as poorly as every barely convincing jumpscare thrown at you along the way to that stunted finale. The villains’ plans are as ludicrous as they are unfeasible – making Assassin’s Creed’s grand conspiracies look realistic by comparison. Nothing connects into a meaningful message about anything, just into another void where the heart of the experience should’ve knit it all together.

I think that’s what truly is most disappointing – I don’t need Callisto Protocol to be my new Dead Space, despite whatever Striking Distance seems to think. No, what I needed was for Glen Schofield and co. to find that creative heart that led EA Redwood – later Visceral Games – through so many projects. They had a soul to them that was all their own, even when the studio split into Sledgehammer Games. You could still feel the spirit there, but it’s not here. This feels like a product at best, and at worst, a hasty attempt to one-up the series Callisto draws so much blatant “inspiration” from. Instead of looking to the past, it would’ve served Striking Distance better to look to the future.

A bland sad protagonist with all the charisma of a rock with a frowny face, a mystery box-style narrative that only ends with more mystery boxes, a combat system that wants to be multiple entirely different games. The Callisto Protocol might function, and it’ll certainly have its launch issues patched out in due time, but in no way can I recommend it to anyone but the most morbidly curious. Everything was stacked in this game’s favor, and it still wasn’t enough. We didn’t need Dead Space 2.0 – we just needed a cohesive, focused game. Instead, it’s an oddly soulless concoction of unfocused ambitions, poor planning, and inconceivably amateurish design. Whether you’re winning or losing, Callisto Protocol never feels right.

NEXT: This Steampunk Co-op Shooter is CoD Zombies Vs. BioShock