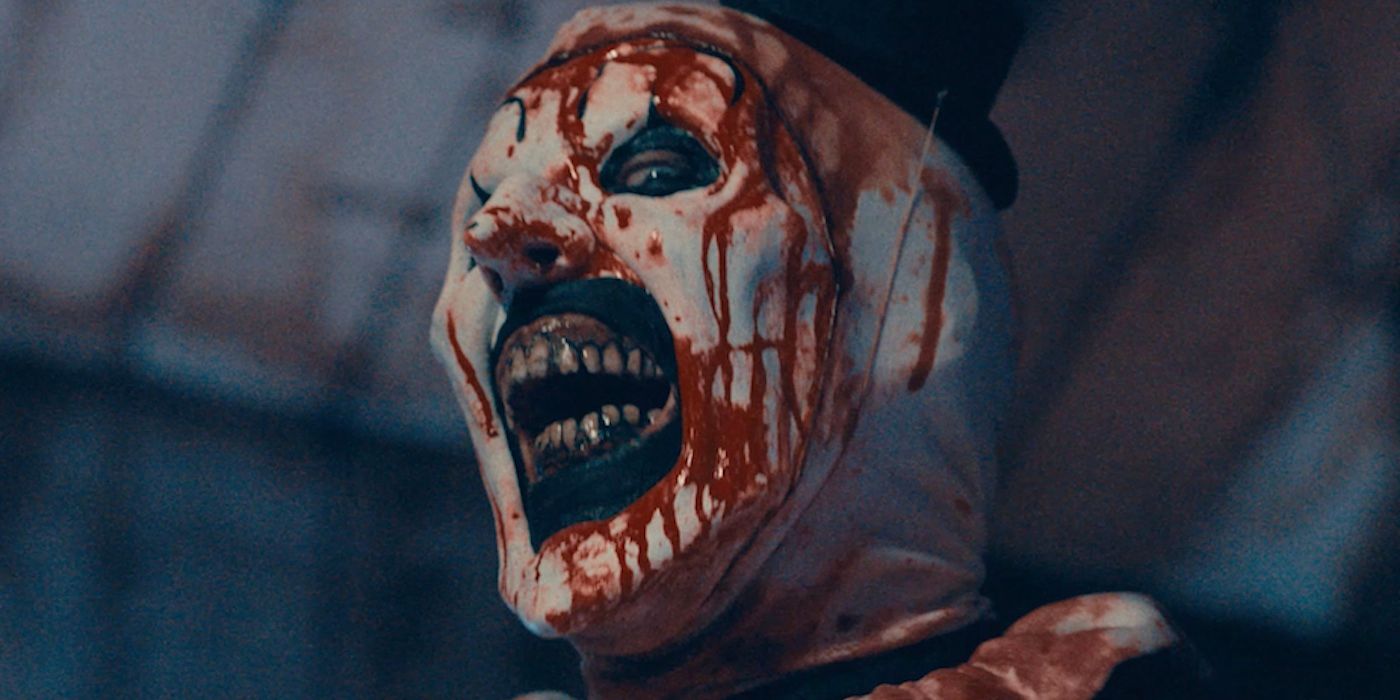 Nobody can get enough of Art the Clown and Damien Leone‘s massive horror hit Terrifier 2. The ultra-gory slasher became a fan favorite largely through word of mouth, earning a much wider, more successful theatrical run than initially expected. It has since seen releases on both 4K Ultra HD and on SCREAMBOX for streaming. Now, the film is turning to a format that feels all too appropriate – VHS. Cinedigm and SCREAMBOX have officially licensed a fully-functional VHS release through Broke Horror Fan and Witter Entertainment that fans can add to their collection.

Horror once thrived on VHS thanks to the often incredible box art that would stick out considerably among other tapes at the video store. Rather than just having one type of box art, however, the Terrifier 2 VHS release comes in three variants. The first two, the black clamshell cover and big box variant, both feature art that we’ve already seen from Creepy Duck Design and Sam Coyne with Art looming menacingly over final girl Sienna Shaw (Lauren LaVera) in her angel warrior costume. The other big box with a flip-open cover features some new art promoting the bloody delicious cereal Art Crispies. Both of the previous pieces would make enticing VHS cover art on their own, but the Art Crispies box captures the video store horror feel with a cartoonish Art pouring blood into his gory breakfast treat.

To best fit the VHS format, the film has also been cropped to a 4:3 format from its original display. Every bit of the process was also directly approved by Leone. More information on the VHS edition, including a re-release of the original Terrifer VHS, will come out as the release date approaches.

RELATED: ‘Terrifier 2’ Director Damien Leone Shares Which Scene Was “Too Far” for the Bloody Slasher

Appropriately described by horror aficionado Mike Flanagan as a “megaslasher,” Terrifier 2 sees David Howard Thornton reprises his role as Art as the evil clown returns from the dead to cause chaos once more on Halloween night. A year after his body was found missing from the morgue, Art found a pair of new victims to terrorize in Sienna and her younger brother Jonathan (Elliott Fullam), the latter of whom is obsessed with the killer clown. Samantha Scaffidi, Jenna Kanell, and Catherine Corcoran also return from the original film with franchise newcomers Felissa Rose, Chris Jericho, Sarah Voigt, Kailey Hyman, Casey Hartnett, and Griffin Santopietro rounding out the cast.

Thanks to its word-of-mouth campaign and intense, vomit-inducting gore that drove thrill seekers to the theaters to check out the film, Leone’s horror sequel grossed over $11 million at the box office across two separate runs despite a budget of only around $250,000. So viral was the horror film that Bloody Disgusting even submitted the film to the Academy for Oscars consideration, even if it was just for the laughs.

How to connect Meta Quest 2 to a PC

Fangs hands on preview – the next Battlerite?