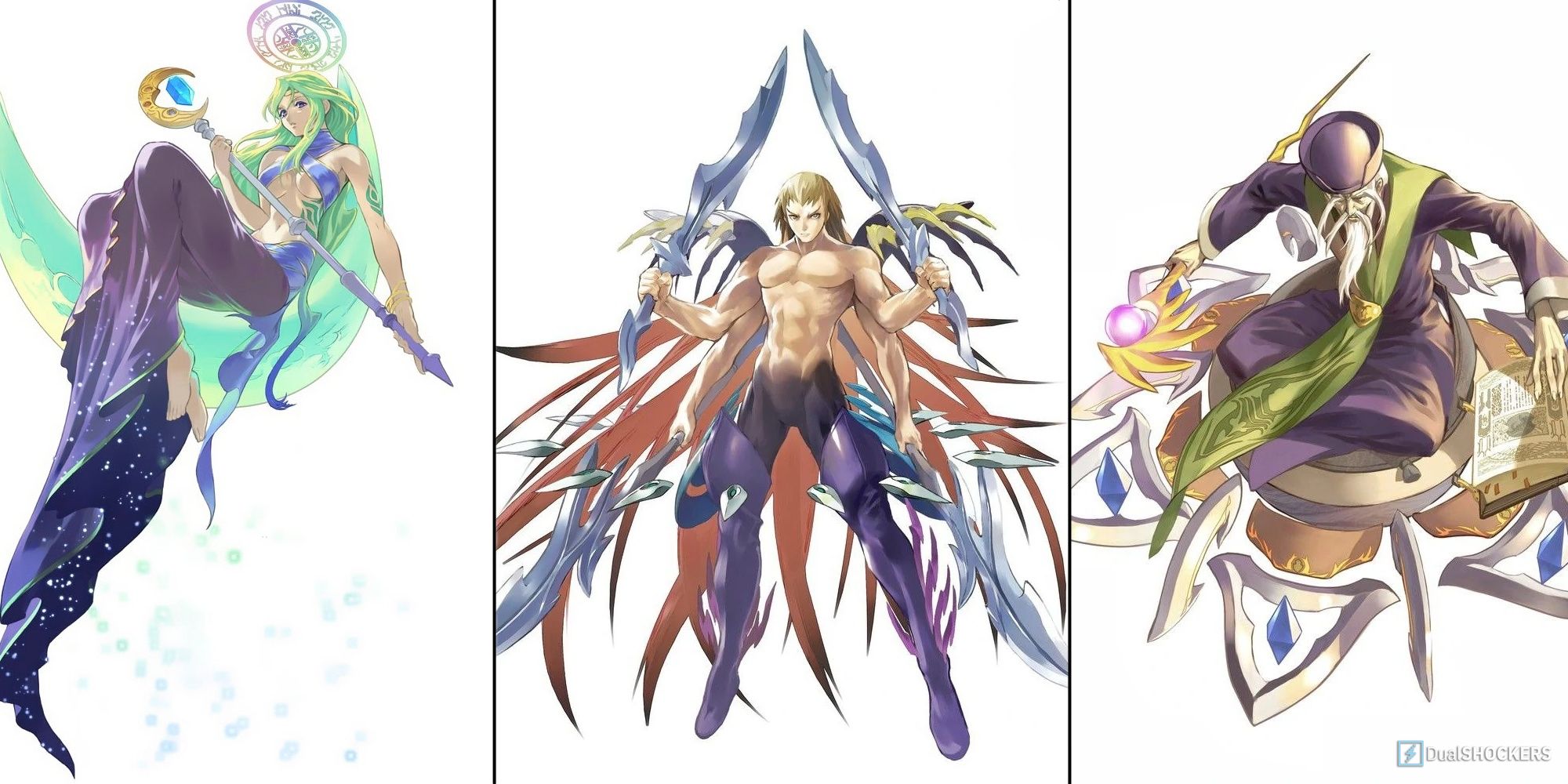 Once Sheena joins your party in Tales of Symphonia, you can have her utilize her exclusive ability to call upon a total of eleven Summon Spirits scattered throughout the game. Once you obtain them, Sheena can summon them during combat upon activating her Over Limit.

However, acquiring these Summon Spirits is no small feat. With the exception of one, Sheena has to form pacts and challenge these powerful beings to battle before she can obtain the power of their awesome might. This list will break down which Summon Spirits prove to be difficult and which are best to use as allies on the battlefield.

Corrine starts you off by being the first Summon Spirit Sheena can summon upon immediately joining your party. A few things that make Corrine stand out from the pack is the fact that he is a Summon Spirit exclusive to Tales of Symphonia and can be called upon without the need of Sheena activating her Over Limit.

However, it goes without saying that because Corrine is the first Summon Spirit given to you by default, he is essentially the weakest out of the bunch. Corrine’s only basic attack involves Sheena summoning him to pounce on the heads of her enemies, serving as a form of long-range attack that doesn’t do much damage. Because of this, Corrine starts at the bottom of our tier.

At number ten is the Summon Spirit Sylph, which in actuality is three separate entities — Sephie (sword bearer), Fairess (shield), and Yutis (bow wielder). As a boss, Sylph can be fought either earlier or later in the game. Regardless of when you choose to fight them, Sylph is notorious for being one of the harder mandatory Summon Spirits to take down and obtain.

When summoned by Sheena, each entity attacks in a three-part attack that hits each foe up to five times. While Slyph’s attacks do considerable damage, this particular Summon Spirit is the only main summoning that doesn’t provide any status benefits upon following up on said attacks. This lack of a perk present in other Summon Spirits’ artes heavily brings Sylph down our ranks as the best Summon Spirit to utilize in battle.

As her name implies, Celsius is the Summon Spirit of ice who can be challenged and obtained upon completing the Temple of Ice. Celsius fights with her hound Fenrir (which is best to take him down first). As a boss, Celsius uses martial arts skills like Beast when fighting at close-range combined with her ice spells, which she casts at a distance. Despite this, she is not as difficult as most Summon Spirits and can easily be disposed of if you carefully prepare and stock plenty of healing items.

As an ally, Celsius’ ice attack can provide a good range, extending almost across the entire field. Sadly, it doesn’t pack much punch compared to other Summon Spirits. Her attack also temporarily boosts the Accuracy stats of the party. Still, this stat is pretty useless compared to others and doesn’t provide much when other Summon Spirits can buff more vital statistics such as Attack, Defense, Magic Defense, etc.

At number eight stands the almighty Efreet, which you can obtain from the alter seal in Triet Ruins. Like Sylph, Efreet can be taken on either at the beginning of your adventure or at a later time. But also like his counterpart, if you choose to battle Efreet during your revisit to Sylverant, he’ll be much more powerful and tenacious.

When summoned, Efreet’s attack is an explosion ground pound — a smaller version of Eruption. Any party members caught within his AoE, however, is granted a brief buff in Attack, which can come in handy against enemies with large amounts of HP and high Defense. Unsurprisingly though, Efreet’s Eruption and Attack buff don’t bring a lot to the table in terms of power and benefits that other Summon Spirits (and, in some cases, even party members) don’t utilize on a much grander scale.

Gnome is a Summon Spirit that can be battled and acquired in the Temple of Earth. Like Celsius, Gnome doesn’t serve too much of a challenge, so he’s yet another simple summoning for Sheena to obtain, provided you’re not severely under-leveled. When summoned as an ally, Gnome plops onto the enemy, causing stalagmites to sprout around him, which can do some decent damage.

His added perk works quite similarly to Efreet, but other than just buffing up the party’s Attack, your combatant’s Defense is also temporarily increased, making him a much better alternate than Efreet in terms of status buffs. This alone ranks Gnome slightly above the fire lord but not enough to exceed his placement at number seven compared to other Summon Spirits that provide more power and heavier hits to their foes.

At number six is the water nymph Undine. This entity serves as the first official Summon Spirit Sheena and her crew have to face after completing the Seal of Water in Thoda Geyser. As the first, Undine’s battle is not as difficult as the other Summon Spirits who come after her. Undine’s Spread attack leaves a lot to be desired as a partner. However, the aftereffect of her Spread provides slight HP recovery for party members who stand within its AOE after it’s commenced.

While possessing Spread attacks mixed with healing capabilities, they’re nothing Raine and Genis can’t make up for with their respective spells. Still, her ability to heal in the first place slightly places her further up on our list compared to other Summon Spirits.

At number five is the graceful Summon Spirit Luna, who can be fought atop the Tower of Mana. In the battle, Luna doesn’t fight alone but is instead aided by her partner Aska. Luna prefers to hang back and utilize light spells like Photon and Ray to do damage from afar, while Aska charges the frontline. The fight with Luna is surprisingly moderate in terms of difficulty, even though you fight two bosses simultaneously.

When summoned by Sheena, Luna can cast an attack similar to the light spell Judgment, which causes beams of light to crash down, damaging all enemies on the screen. Her ability also increases the magic attacks of all party members on the field, making her status buff a bit more helpful since the Magic increase can complement and temporarily boost Genis’ and Raine’s spells.

Hailing from the Temple of Lighting, Volt ranks at number four on our list of best Summon Spirits. Depending on your party buildup, Volt can be extremely difficult or relatively simple, primarily if you utilize Genis’ magic artes that aren’t of the lightning element.

When summoned onto the battlefield, Volt’s AOE lightning spell strikes from above in a circle, causing moderate to high damage. Where the attack really shines, however, is that any party members standing within its vicinity will be cured of any status ailments they may be suffering. A helpful perk that awards Volt a high placement on our list.

Shadow ranks pretty high on our list at number three for several reasons. Not only is his dungeon (the Temple of Darkness) one of the most annoying in the game for fans, but to fight him, you must first gather his small cluster of shadows to the end of the altar in an otherwise wholly pitch-black dungeon. As a boss, he can prove quite formidable as he morphs parts of his limbs into various melee weapons, from blades to axes. His dark elemental attacks consist of artes like Dark Sphere and Bloody Lance, which he loves to spam.

When utilized as a summoning companion, Shadow can attack only a single enemy but is one of the few Summon Spirits whose attack can hit multiple times while also doing significant damage. The party also receives a temporary immunization to status elements — a much better perk given the number of negative status effects in the game. With this, added to causing more damage to his enemies, Shadow ranks slightly higher than Volt.

The King of the Summon Spirits comes in a close second, serving as the final mandatory Summon Spirit to obtain in the game. Despite being the last story summoning, Origin is one of the more moderate boss challenges.

When summoned by Sheena, Origin casts the arte, Rameesh, which deals lightning elemental damage to enemies in a triangle-like glyph. Its after-effect temporarily raises the party’s Attack and Defense stats. Due to Origin being the Summon Spirit that deals the second most amount of damage to your foes, he is an ally you’ll likely summon the most when using Sheena. He is only surpassed by the strongest and wisest of all the Summon Spirits.

Maxwell, the secret boss known as the Ancient Ruler of the Elements, takes the win at number one on our list. Though he’s completely optional, Maxwell can still prove to be a worthy aid on the battlefield, as he is by far the best Summon Spirit in the game.

When called upon by Sheena, Maxwell can cast his almighty Meteor Storm, dealing the highest output of damage than any other Summon Spirit (including Origin), added with raising the party’s Magic Defense.