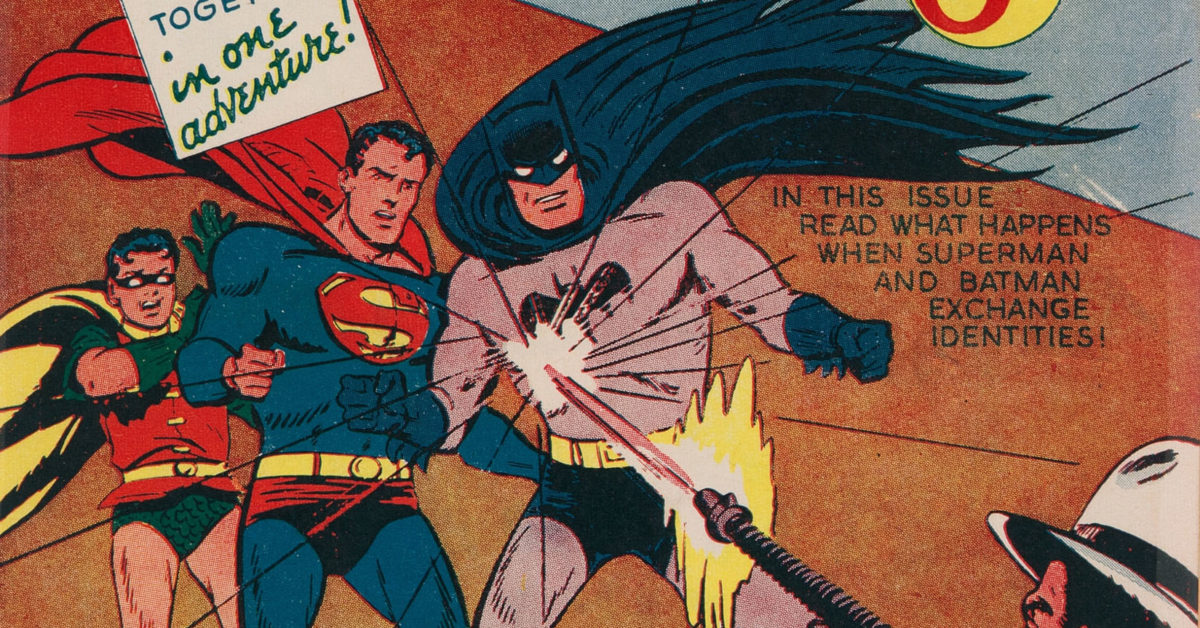 Super Adventure Comic #55 is the UK edition of World’s Finest #71, an issue that launched the Superman/Batman team stories in that title, which is a key because the combination of the world’s two most famous superheroes in actual stories also proved to be comics’ most important team-up for decades.  While World’s Finest had featured Superman, Batman, and Robin together on their covers since the beginning (the title started as World’s Best Comics in 1941, before changing the title to World’s Finest Comics with issue #2), Superman and Batman didn’t appear in the interior stories until issue #71, cover-dated July-August 1954, and that team-up tale appeared in the UK’s Super Adventure Comics #55 around eight months later.  CGC has slabbed this copy of this issue as World’s Finest Comics #71 UK Edition (K. G. Murray) CGC VF 8.0 Off-white to white pages and it’s up for auction in the 2023 January 12 – 15 Comics & Comic Art Signature® Auction #7338 at Heritage Auctions.

The Super Adventure Comic story which debuted in World’s Finest #71 was written by Jack Schiff and drawn by Win Mortimer, with a cover by Mortimer.  The key early meetings of Superman and Batman in comic books are fairly well chronicled, and this one is an important stop along the way. The characters appeared on the cover of New York World’s Fair 1940 together.  They had a single-panel cameo in All-Star Comics #7 in 1941.  They then appear together briefly in the set-up to the adventure in All-Star Comics #36 (cover-dated August 1947) and, more famously, learn each other’s secret identities in an adventure Superman #76 (cover-dated May 1952).  In fact, World’s Finest #71 refers to that Superman #76 saga in the very first panel, which provides the pretext for these characters to get together again in 1954.

This Super Adventure Comic version of World’s Finest #71 is the only CGC-graded copy of this edition of this key on the CGC Census. International editions have become increasingly important to collectors in recent times, making this a particularly rare and desirable comic book up for auction.  Of note, there’s a Batman #47 Australian Edition (K. G. Murray) CGC FN/VF 7.0 Cream to off-white pages available in this auction as well. Those interested in bidding should check out the FAQ on the bidding process and related matters on the Heritage Auctions website. 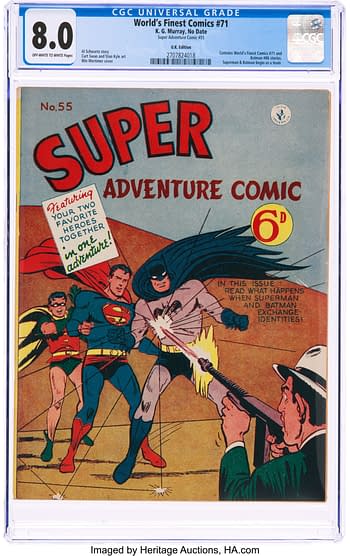 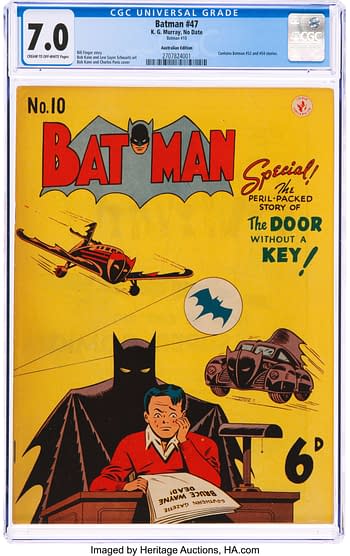 Dead Space Movie In The Works With “Another Director”, Says John Carpenter

What Are You Playing This Weekend? – Issue 459