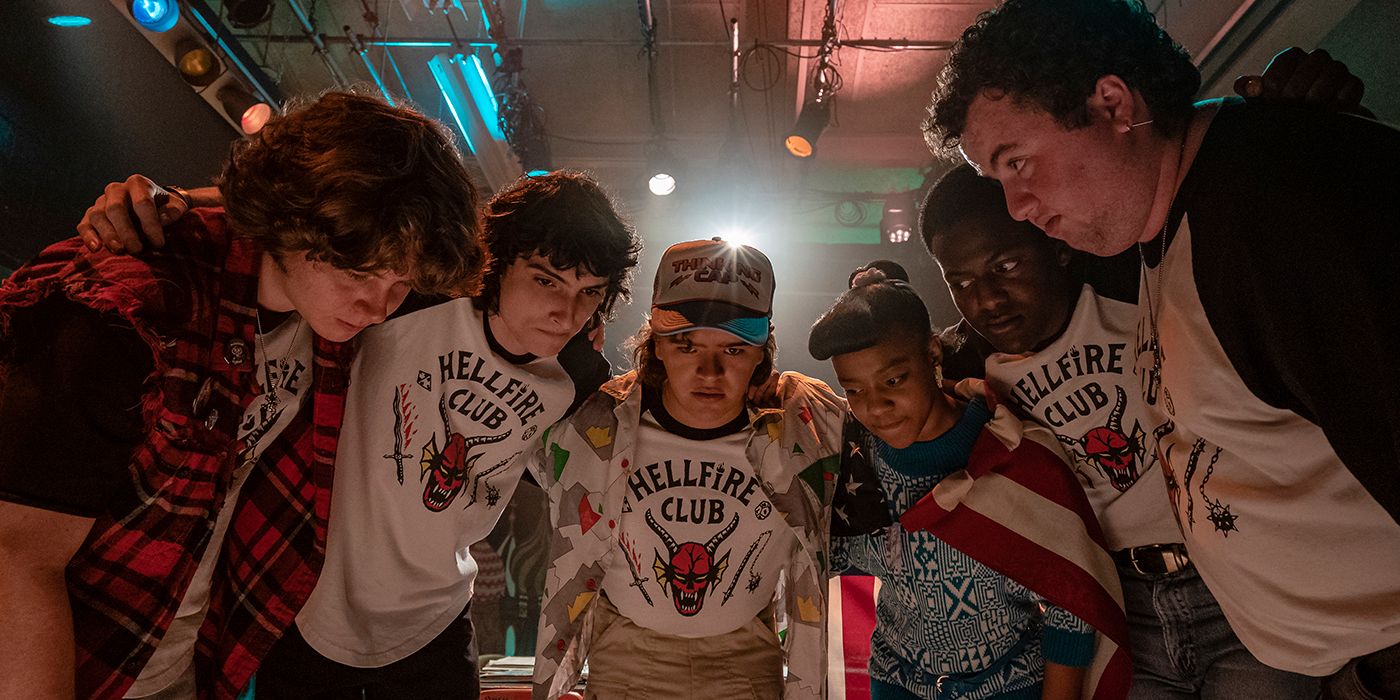 Stranger Things took center stage today during Netflix’s Geeked Week festivities, with special cast appearances and videos, featuring a look-ahead at what’s to come in Season 4 Volume 2, an aftershow unpacking Volume 1 with the ensemble cast, and a special surprise Dungeons & Dragons campaign from the one and only Hellfire Club. Series stars Finn Wolfhard, Gaten Matarazzo, Priah Ferguson, and Joseph Quinn sat down to play a special one-shot DDnDD campaign, hosted by DnD writer B. Dave Walters, to celebrate the series’ triumphant return to Netflix.

DnD has played an important role in the series from its inception with the initial group of children having bonded together over their love of the game and all things nerdy. The game’s influence is also reflected in the series’ narrative as the children use DnD concepts and villains to understand and conceptualize the increasingly “strange things” happening in their lives. In the latest installment of the series, our hometown heroes are facing off against a powerful spellcaster known as Vecna who is determined to bring an end to everything they hold dear. The show has also featured several other iconic DnD baddies such as Season 1’s Demogorgon and Season 2’s Mind Flayer.

In the first episode of Stranger Things Season 4, we meet the Hellfire Club, helmed by dungeon master and high school senior Eddie Munson (Quinn), ahead of the conclusion of their semester-long campaign. When Lucas Sinclair (Caleb McLaughlin) can’t make it to the session because of a conflict with his basketball championship, Mike (Wolfhard) and Dustin (Matarazzo) enlist the help of his equally nerdy younger sister Erica (Ferguson). As the DnD troupe’s final combat leads to a face-off with the presumed dead Vecna, it’s Erica who leads the Hellfire Club to victory with a divinely timed nat-20 roll, landing a critical hit against the villain. You’ll have to check out the Geeked Week one-shot campaign to see if Ferguson’s luck is as good as her character’s.

Stranger Things Season 4 Volume 2 comes to Netflix on July 1. In the meantime, check out the cast of the series playing a Dungeons & Dragons one-shot campaign below.

Book II Will Officially Launch On Quest 2 This July