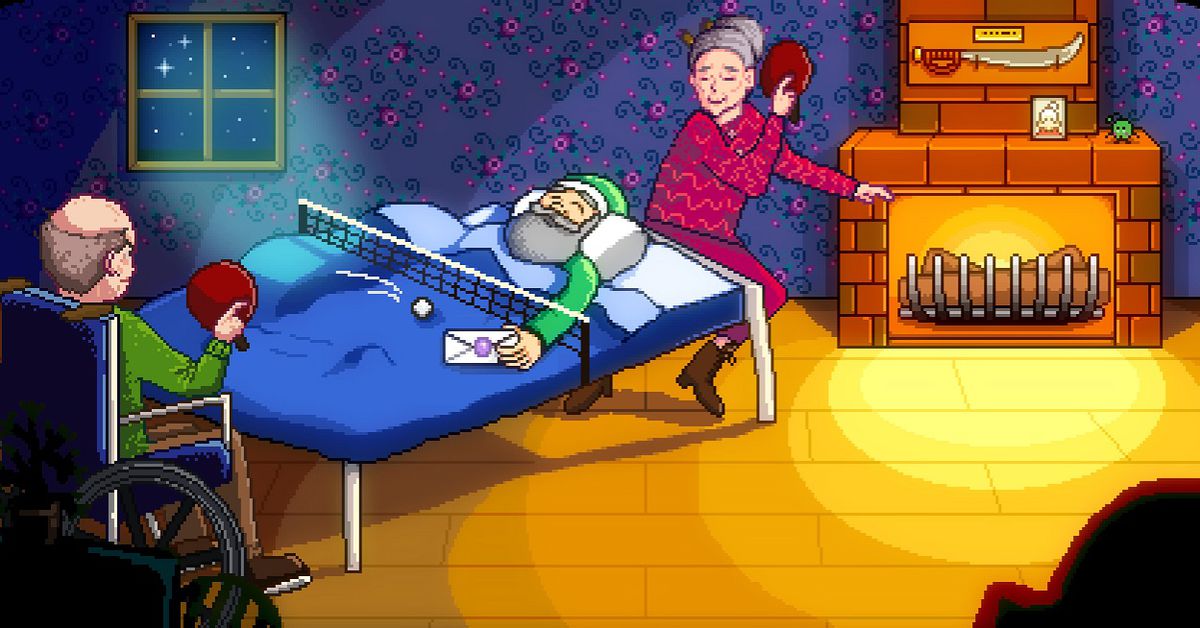 The popular farming sim Stardew Valley starts with you inheriting a plot of land from your late grandfather. As the scene plays out, you’ll see your grandpa laying ill in bed, clutching a letter stating that he has bequeathed his farm to you. In the original version of the scene, the grandpa’s bed looks rather uncomfortable, like the grandpa is laying on one of those plastic tables that unfolds. Over the years, it’s become a recurring joke throughout the fandom, and recently fans have been creating mods that riff off of the niche meme.

The mods for grandpa’s bed picked up in early April, and they’re all visual jokes that riff on the original shitty bed. The mod featured in the lead image of this article turns the bed into a rather snazzy ping-pong table. Another mod called “Slightly Worse Grandpa Bed” makes the bed just a touch less comfortable by breaking off one leg of the bed frame, leaving grandpa to sleep on an uneven surface. According to the mod’s page, the creator made it “just in case the original grandpa bed wasn’t bad enough.”

One mod turns the grandpa into the bed itself:

This one references the popular Family Guy death pose meme. Here, instead of Peter Griffin lying on the floor, we see our poor grandpa.

Another mod just fully takes grandpa out of the scene. Good riddance! Both this and the Family Guy death pose mod were made by BeepSignal because, in their words, they’re “committed to a bit.”

This isn’t even all of the mods. Other fun examples include a mod to turn the bed into a piece of mail and the piece of mail into a tiny bed, as well as another in which grandpa wets the bed.

Stardew Valley is known for having a vibrant modding scene. Whether it’s adding more delectable food or tweaking gameplay so it’s less frustrating, mods have generously expanded the world of the game in useful and charming ways. Now, these mods are all just to bother grandpa. It may seem like it would be a hassle for him, but don’t worry — grandpa’s a heavy sleeper!

Denial of responsibility! Gamers Greade is an automatic aggregator of the all world’s media. In each content, the hyperlink to the primary source is specified. All trademarks belong to their rightful owners, all materials to their authors. If you are the owner of the content and do not want us to publish your materials, please contact us by email – admin[email protected]. The content will be deleted within 24 hours.