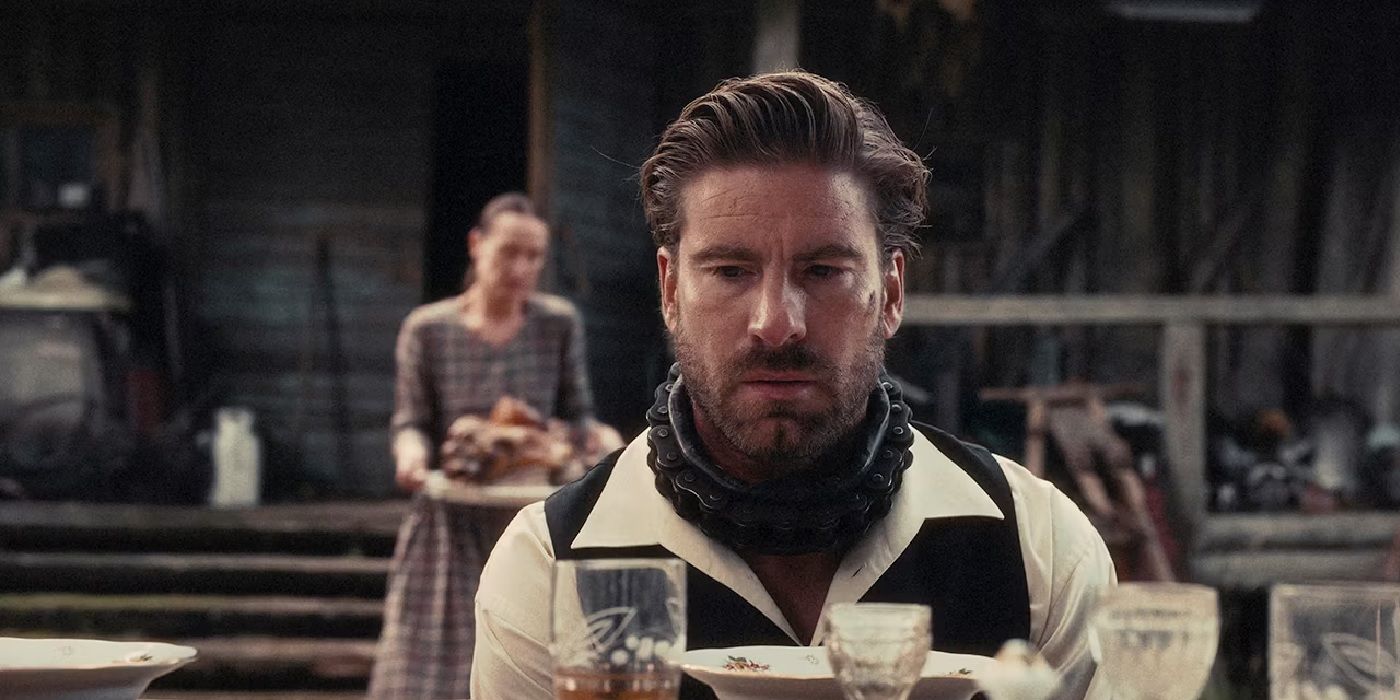 Fans of Guillermo Del Toro-style stories and Black Mirror can all join hands and look forward to the release date of Squeal. Advertised as a dark fairy tale with disturbing twists, the movie had its trailer exclusively revealed by ScreenRant today. The story centers around a man in search of his missing father in Eastern Europe, but his mission is cut short when he ends up in a pig farm whose owners are… unique. The Latvian production is set to premiere later this month.

The trailer for Squeal kicks off with heavy imagery of a naked man in shackles, but we soon find out that this is not the weirdest thing the movie has in store for us. As the title suggests, pigs play a major part in the story, even though for the time being we can only speculate how they factor in the twisted tale – but they’re clearly more intelligent than your average pig.

After that, it’s no holds barred for bizarre characters throughout the trailer, as we get to see a woman that’s probably trying to pass as a damsel in distress, her very violent father, some men barking (yes), and a general gritty setting that doesn’t exactly welcome you in. In other words, a must-see for horror fans.

Squeal is directed by Aik Karapetian, who’s clearly not interested in telling conventional stories. His directorial debut, People Out There, centers around a young man who’s sucked into the underworld of crime, drugs and violence due to parental alienation, while his acclaimed last movie Firstborn told the bleak story of an unlikable protagonist who kills someone by accident. Like in his previous films, Karapetian also pens the script for Squeal, but this time he co-writes it with screenwriter Aleksander Rodinov (Freeze Dance).

Squeal is scheduled to premiere in US major cities on August 19. It also becomes available On Demand on the same day.

Filmmaker Aik Karapetian’s dark fairy tale SQUEAL centers on Samuel (Kevin Janssens), who is far from home, searching for his father. Lost in remotest Eastern Europe, on the edges of a mythical forest, a minor road accident leads to a chance meeting with a pig-farmer’s daughter Kirke (Laura Siliņa). Sam soon learns that his priorities must change if he wants to survive. Her initial hospitality is a smoke screen to capture him and make him a forced laborer on the farm. Alone, unable to speak the language, and chained up 24/7 with the pigs, he learns to adapt. Fortunately, a seemingly magical piglet gains Sam’s confidence and shows him the way to freedom and true love.

This Mobile Game Creation Bundle Is An Excellent Value