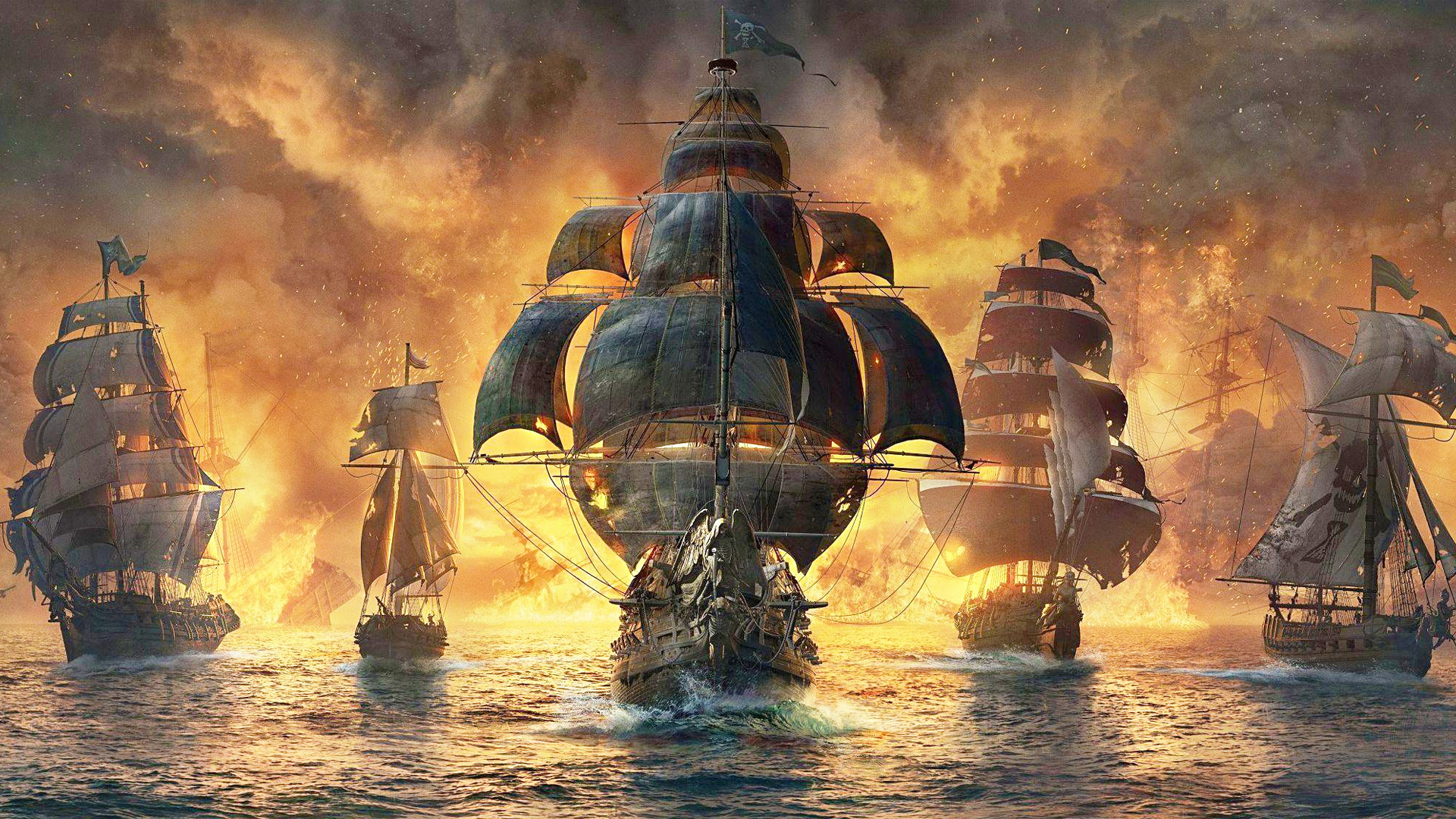 In early March, we reported Ubisoft’s announcement of a dedicated Insider Program for Skull & Bones testing. Today, a leaked video of the game’s Alpha test appeared on Reddit, providing a new look at the pirate game.

The captured footage shows what is clearly a narrated onboarding for new players, which is perfect as it reveals a ton of information on Skull & Bones, such as all content being available for solo players. The footage also doesn’t show any non-ship combat, which aligns with previous rumors.

We’ve transcribed the whole narration below, in case Ubisoft takes down the video.

Welcome to Skull & Bones, a world inspired by the Indian Ocean during the Golden Age of Piracy. You’ll start your journey as an underdog whose goal is to become the most infamous pirate to sail these waters. Journey to the pirate den of Sainte-Anne located in the Red Isle.

This centre of pirate activity is where you can craft new ships and equipment, provision for your expedition at sea, pick up high-risk, high-reward contracts, and socialize with other players.

As a pirate, your reputation is everything, and Skull & Bones tracks this through Infamy. The higher your Infamy, there more opportunities you’ll unlock. One of the many ways to grow your Infamy is to take up contracts.

These are deals you can make with the NPCs in the world which can have great rewards if you’re successful or penalties if you fail. Certain contracts can be shared, allowing you take them on in a group of up to three.

You can also gain Infamy by completing other activities such as exploration, plundering, treasure hunts, big worlds events, and much more.

Any pirate worth their salt will tell you that preparation is key to successful expedition at sea, so always ensure that your ship’s cargo is well stocked with rations, water, repair kits, and ammunition.

As a pirate captain, it’s also important for you to look the part, so before venturing out don’t forget to visit the atelier to put the finishing touches on your individual look. Once you’re ready, head out and explore!

As a rookie pirate, you only have access to a small dhow, but as your Infamy rises, you’ll be able to craft bigger and stronger ships, each with their own unique playstyle.

At sea, you’ll need to pay close attention to your ship’s health and crew morale. You can recover health by using the repair kits in your cargo. Crew morale also depletes over time. Your crew will mutiny and take control of your ship if you do not give them food or drinks to restore morale.

If your ship sinks, you’ll lose some Infamy and respawn at the nearest discovered den or outpost. The good news is that most of your cargo will be recovered and you’ll have the opportunity to retrieve the rest from the wreckage, but you’d better be quick, as other players can also steal it.

The world of Skull & Bones is filled with riches and resources that you’ll be able to gather and harvest as you explore. Lagoons and rivers are teeming with dangerous wildlife that you can hunt for animal skins and meat.

You’ll also be able to harvest a variety of raw materials such as ore, fiber, and wood. These can be refined in Sainte-Anne to produce crafting resources. Crafting is an essential activity for you to progress as an infamous pirate.

Unlock blueprints and use your refined resources to craft stronger ships, weapons, and furniture. These give a range of perks including higher hull HP, greater damage attacks, and faster sailing. With your new fleet and growing arsenal, optimize your ship’s loadout based on your personal playstyle and objectives to improve your chances of success.

Out in the open ocean, opportunities are abundant. Use the spyglass to identify trade routes or wealthy merchant ships and assess your prey’s cargo and firepower. Strategize a plan of attack based on your opponent’s defenses and take advantage of their weak points to deal more damage.

Sinking your foes from afar rewards you with only a portion of their cargo, as some of it will be lost to the depths. Getting in close to execute a boarding maneuver will help you to maximize your gains.

But beware. You can turn from predator to prey in a heartbeat if you attract the unwanted attention of other players or of privatees, the vicious pirate hunters that patrol the seas.

As you explore, be sure to keep an eye out for outposts scattered across the map. Outposts are safe spots where you can dock your ship for a short reprieve from the perilous seas. Visit vendors hawking their wares, cook food, and store your valuable cargo in the cache.

Although all the content in Skull & Bones can be done solo, you might enjoy ruling the seas with your friends. While sailing, you can easily invite fellow pirates to group up using your spyglass. Synergize your different playstyles, ships, and weapons to defeat deadlier enemies.

As you grow stronger, take on more difficult challenges such as attacking forts and plundering settlements, and if you’re bold enough, engage in world events like taking down heavily laden merchant ships and their fleet of warship escorts.

Skull & Bones was first announced at E3 2017 with an original launch date of Q4 2018. Needless to say, the game received multiple delays since, though Ubisoft executives have recently expressed satisfaction at the game’s progress during the latest earnings call.

It is possible Skull & Bones will be officially re-revealed during Ubisoft’s next games showcase.